Technical Analysis is the study of the behavior of the market and market participants. We try and identify the direction of the primary trend and invest accordingly. As Technicians we can apply our price-focused approach to any market, whether it’s stocks, commodities, currencies or even Bitcoin. If it is liquid and driven by the supply and demand dynamics in that particular market, then applying our methods of price analysis makes perfect sense and it works very well.

I jumped on board the Bitcoin train last year and added it to my Research Platform. Our clients really enjoy it, whether they are actively trading it or just interested in the product. To be honest, one of the biggest reasons why I decided to start including it in my weekly analysis is because I saw an opportunity to profit from this market. At the end of the day, isn’t that why all of us are looking at these charts in the first place, Bitcoin or otherwise?

It was April of 2016 and I saw what looked like the completion of a healthy consolidation within an ongoing primary uptrend. So I added it to my arsenal and said let’s do this. My targets up near 660-680 were hit very quickly and even exceeded them. The price of Bitcoin rallied over 60% in the next couple of months following that post. I was hooked! 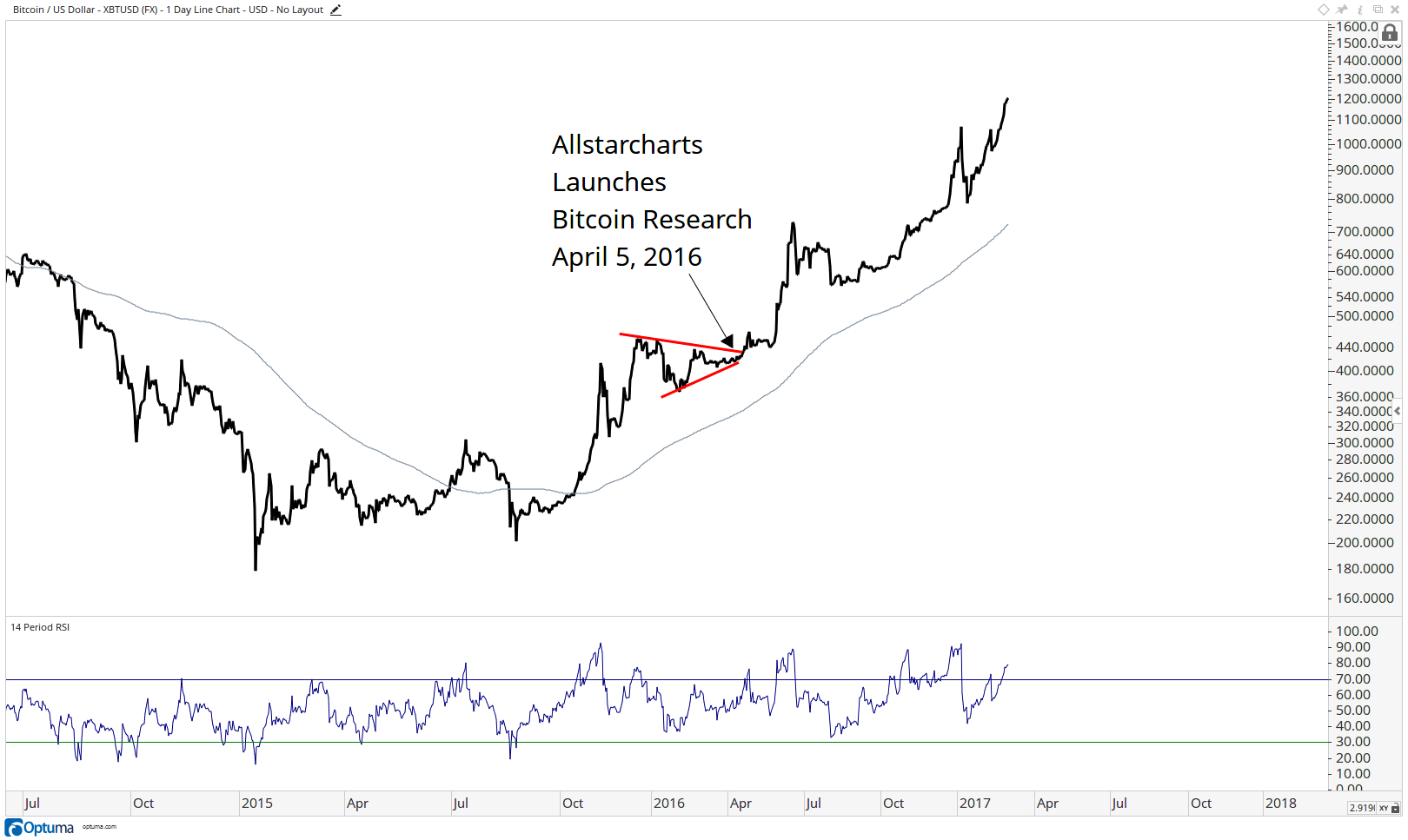 In late October last year, Bitcoin once again was completing a similar consolidation and once again there was every reason to buy. In fact, pretty much the exact same reasons as in April. This next target was the 2013 highs, a logical area of former supply. So the trade was: buy it over 700 and sell into 1075, the former highs. 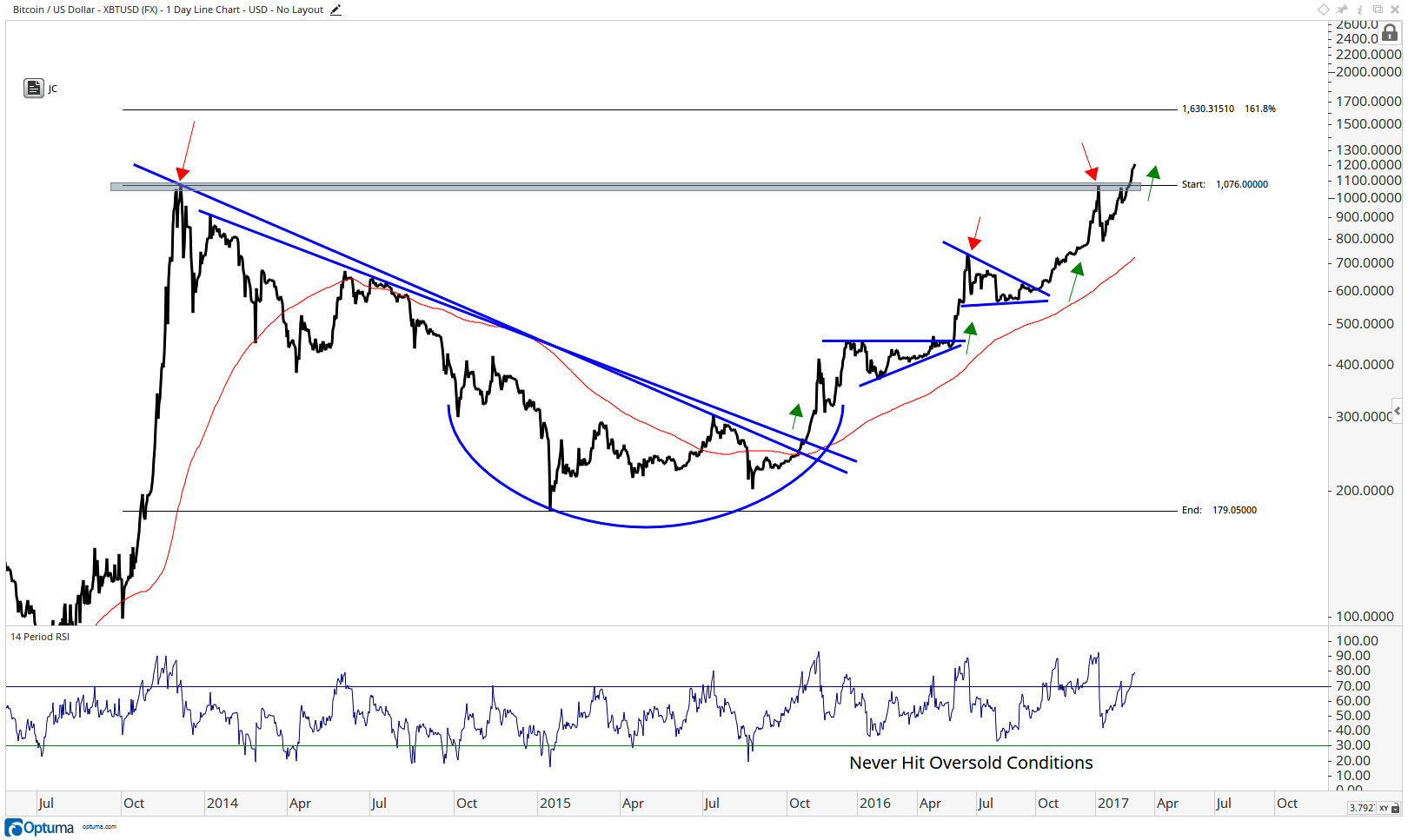 Its amazing how well the supply and demand dynamics work in markets. Bitcoin is clearly no different. In early January, as soon as Bitcoin ran into that 1075 area, which was former resistance in 2013, the price fell over 25% in just a week. We don’t mind because when our targets are hit, we are disciplined and take profits. Bitcoin is no different.

So? Moving forward what do we want to see? Well, to me it’s simple: the former highs from late 2013. These were the early January highs before falling 25% and its an obvious former area of overhead supply (more sellers than buyers). The market exceeding those levels is evidence that this is now the opposite and there is more demand than supply near the 1075 level. Therefore, we want to be long Bitcoin if we are above the 1075 area that was resistance in 2013 and once again in early January this year: 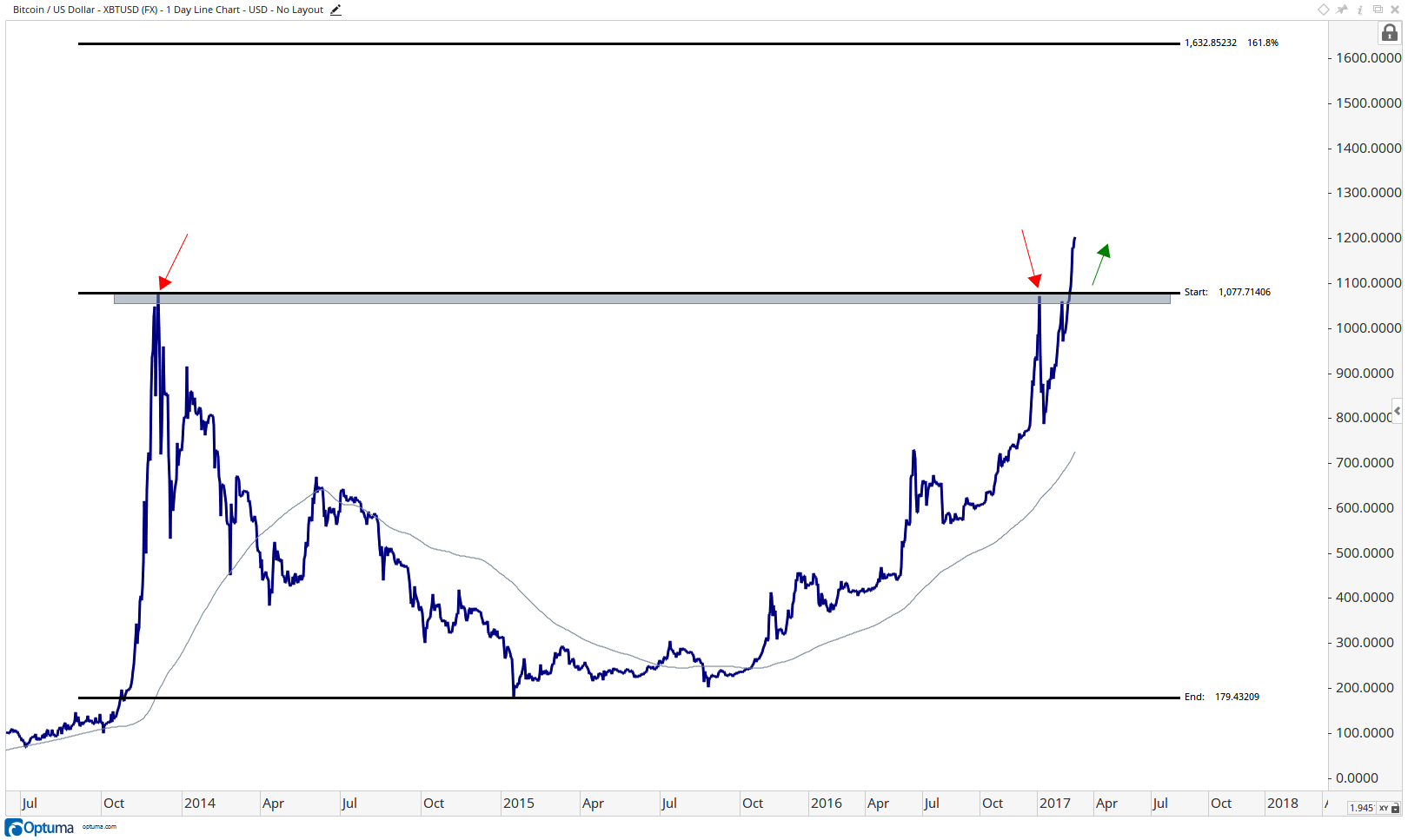 If Bitcoin is below the 2013 highs, then the market is suggesting that the demand has NOT absorbed all of that overhead supply, and therefore a long position makes little sense. So from a risk management standpoint, I’ve made it clear to our clients since last month that we want to be long only if we’re above the late 2013 highs. The upside objective here is near 1630, which represents the 161.8% extension of the entire 3 year consolidation.

A good topic of conversation lately has been the old bitcoin vs gold argument. I like it. The question is not whether philosophically one is better than the other. The only question we need to care about is which one can make us more money. That’s why we’re in the market and that’s the only reason why we’re in the market. Here’s an arithmetic chart of Bitcoin relative to Gold so you can see just what’s going on here. We’re getting what appears to be a historic breakout in the price of Bitcoin vs a competitor (fair or not): 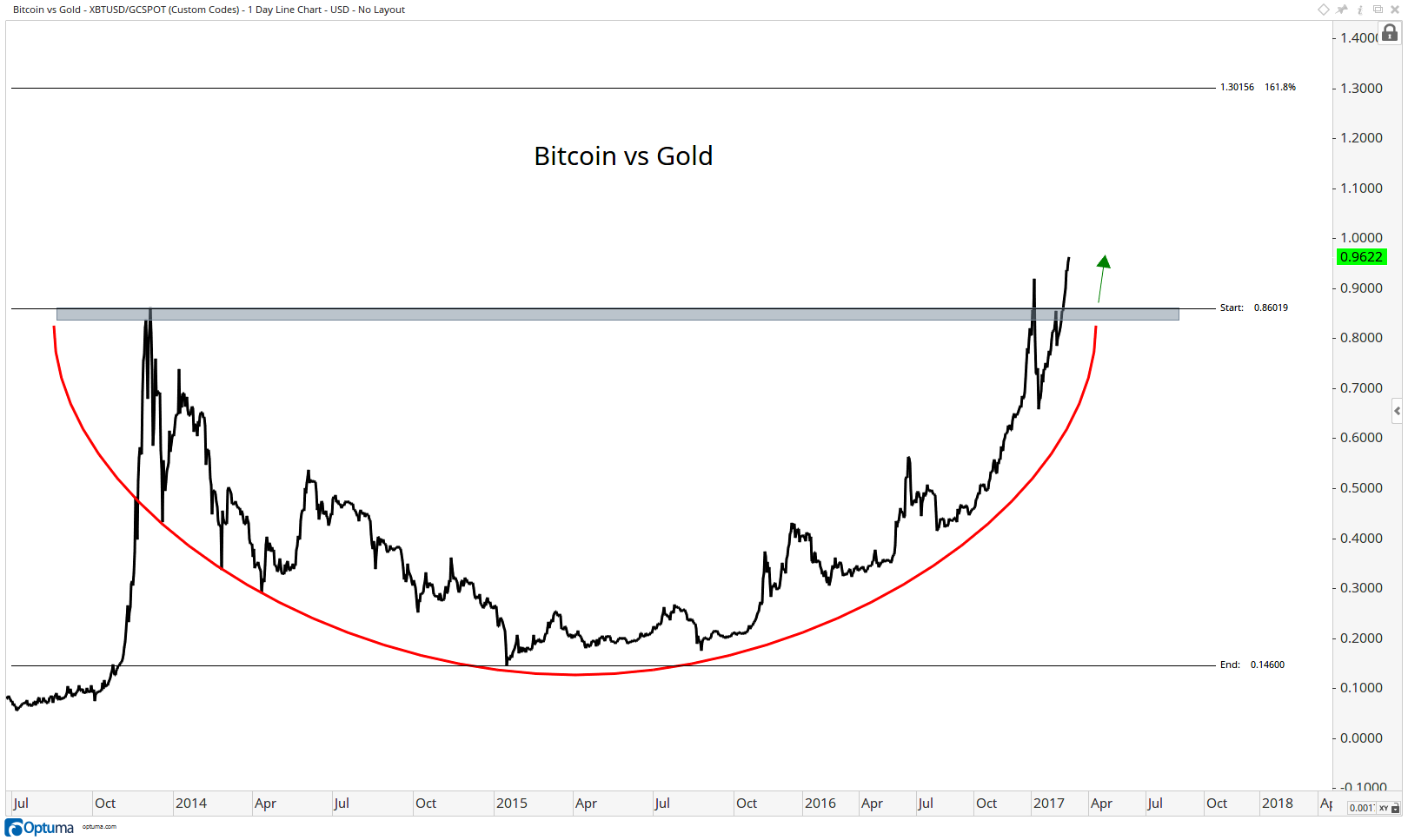 I’m a logarithmic gentleman myself but I did think the arithmetic chart also gives you some good perspective. You can see here in the log chart that this is a strong uptrend, no doubt. It’s not something we want to fight and similar to the absolute Bitcoin charts above, we want to err on Bitcoin over Gold as long as we’re above the 2013 highs: 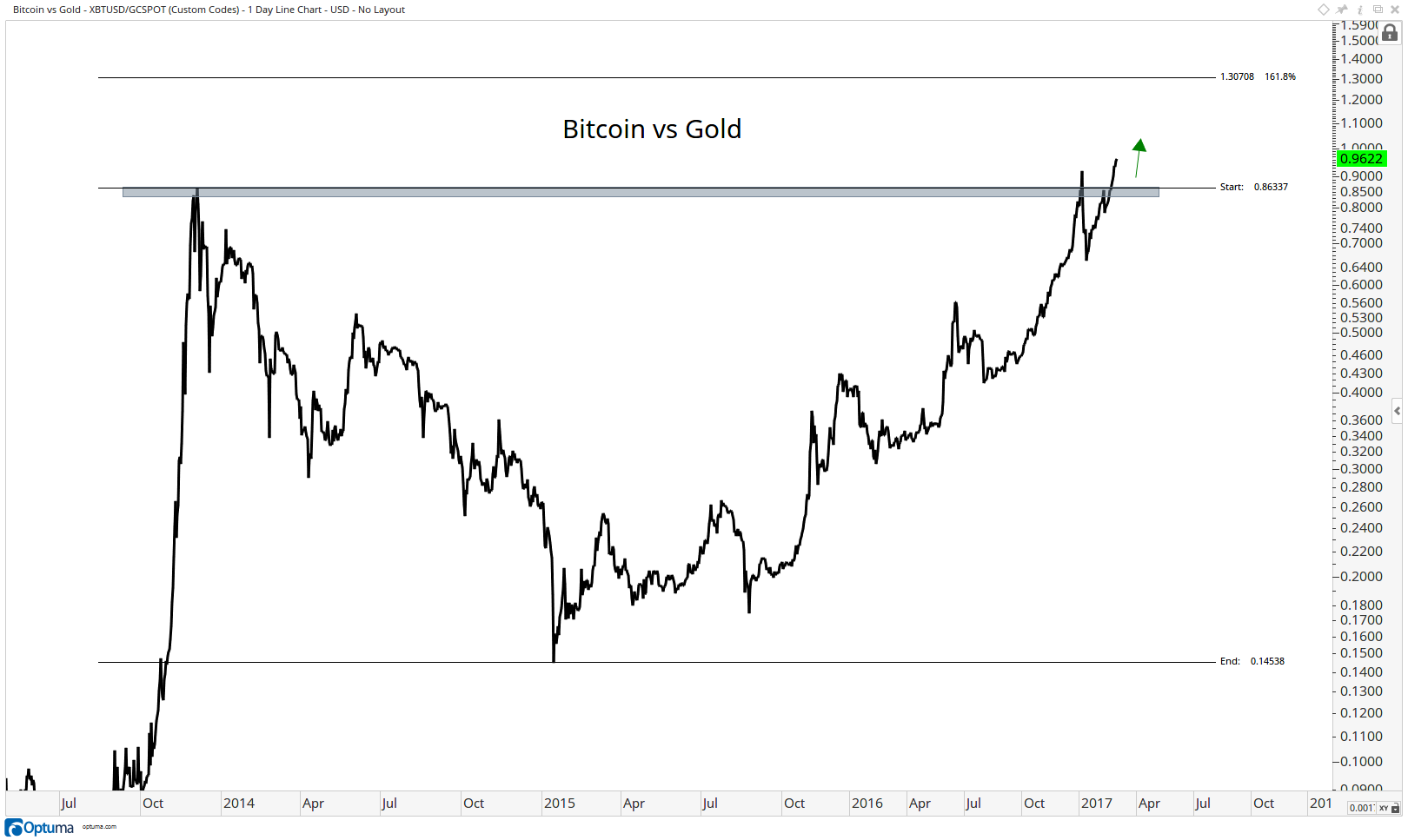 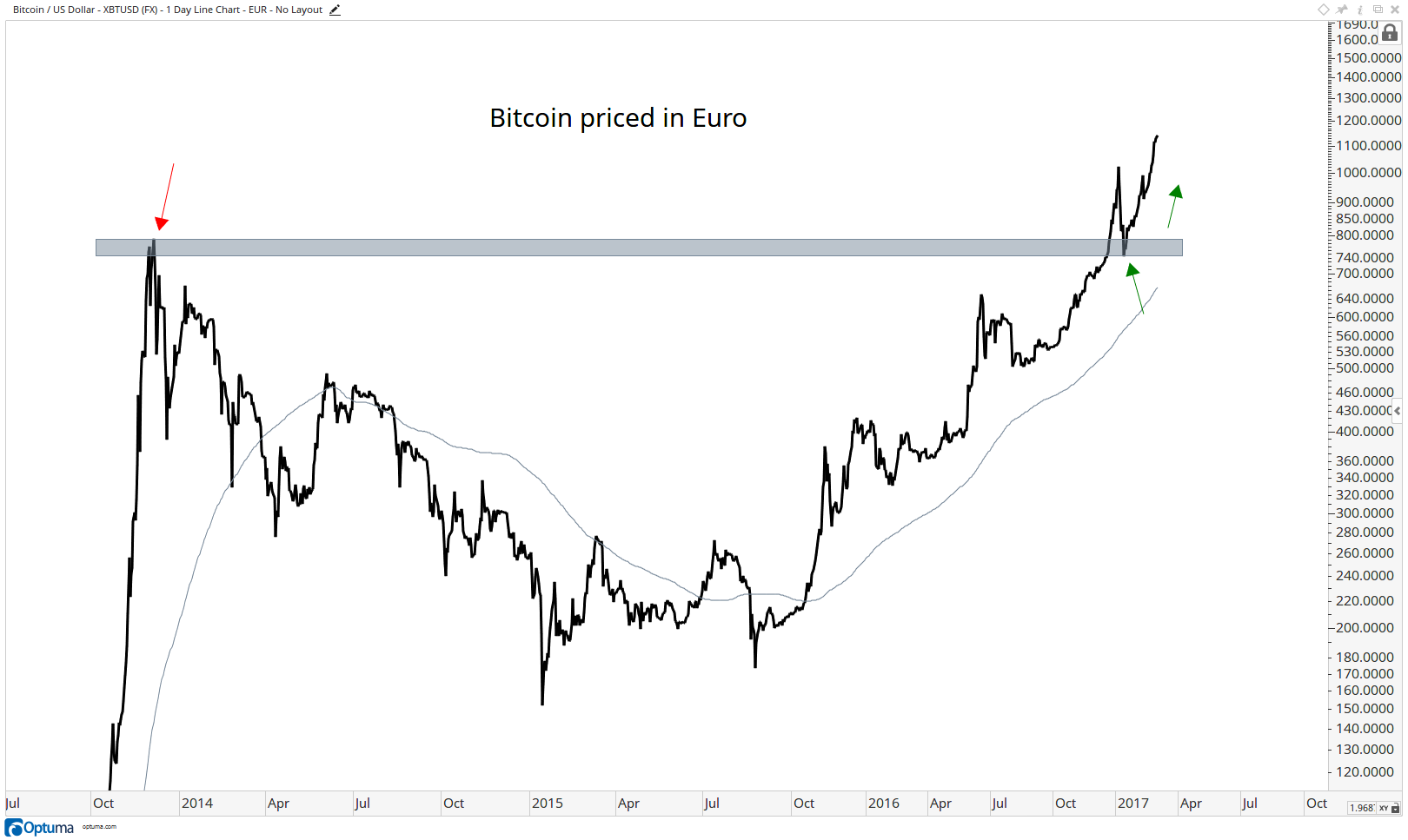 Here is Bitcoin priced in Yen: 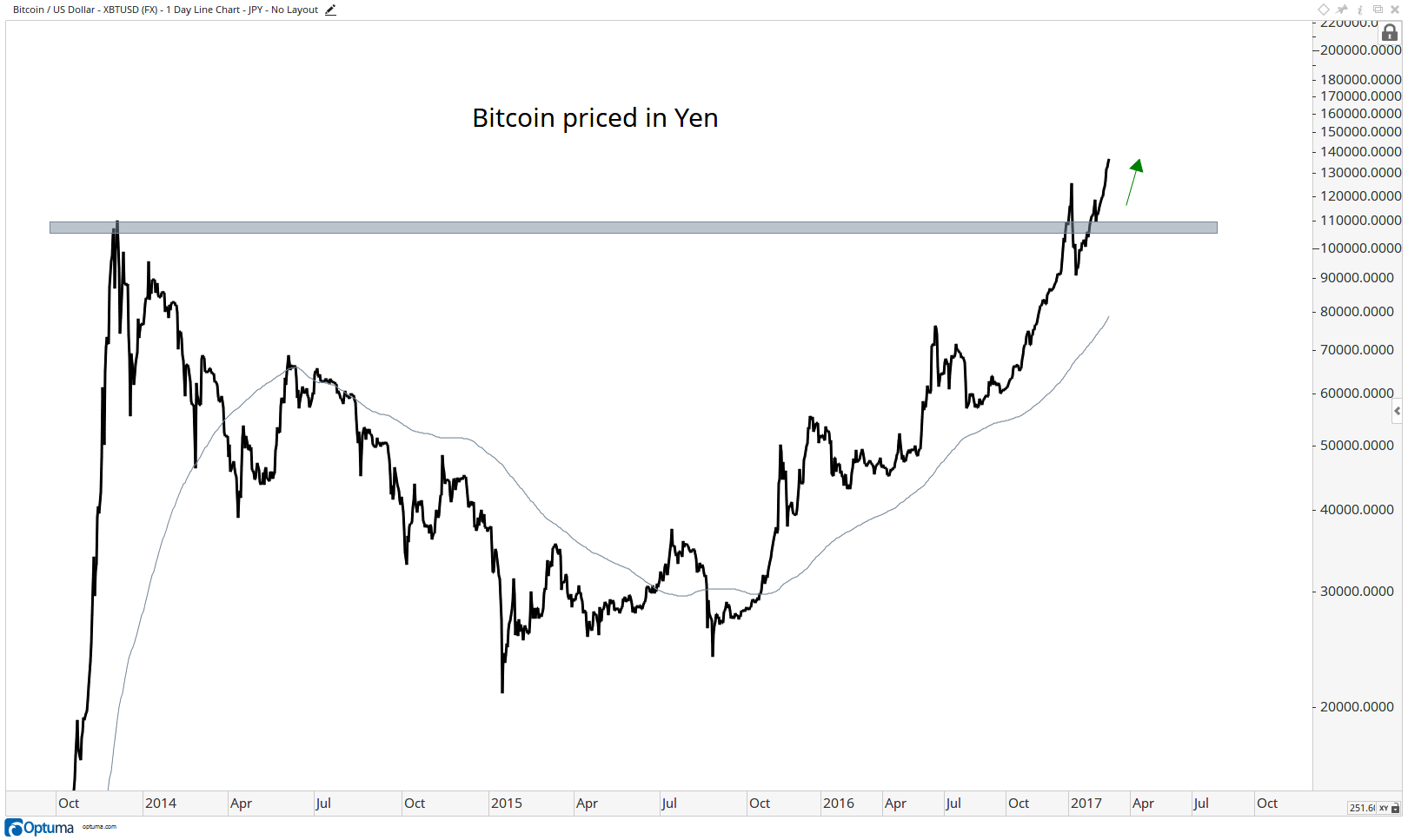 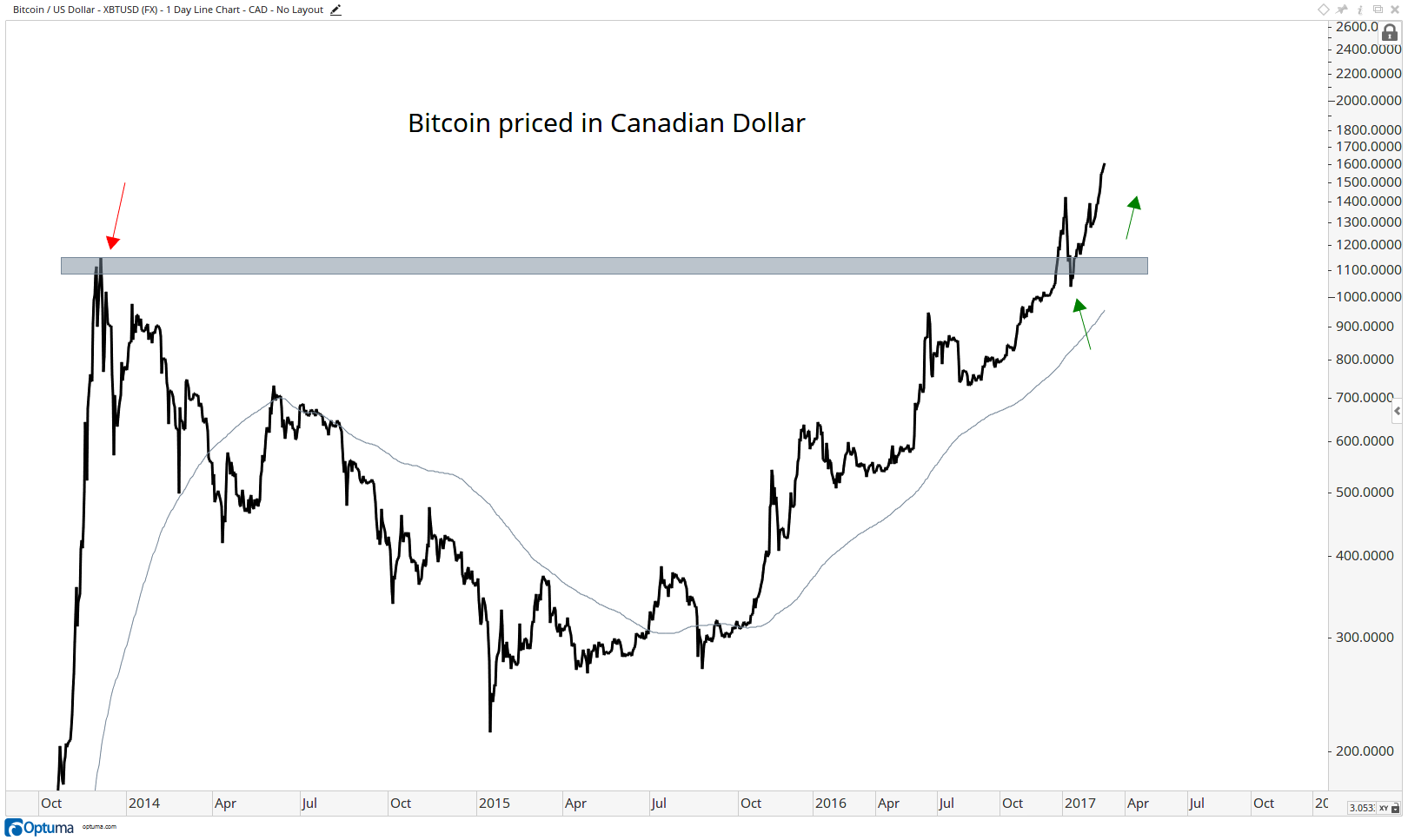 This is a great market that behaves as markets driven by supply and demand should. We’ve had rallies, selloffs, crashes, rip-your-face-off rallies and everything in between. It is no different than the markets we’re accustomed to trading. The one thing I will say is that the cycles are certainly much quicker. These periods of rallies, crashes and consolidation take place within a much shorter time frame than say something like US Treasury Bonds or the S&P500. So it should be treated that way. It’s a younger market. Much younger. So shorter and more frequent cycles makes sense.

I hope this sheds some light as to how we’ve been able to navigate through the ups and downs in the Bitcoin market over the past year using the same Technical Analysis principles we incorporate into every other liquid market around the world.

For weekly updates on these Bitcoin charts, sign up here.