The S&P 500 has declined by 11 percent in three days, the most since November 2008. Sure, stocks are oversold. They’ve been oversold. So What? Well the first thing to take away from this is the obvious – evidence of sellers. An extreme amount of sellers in fact. 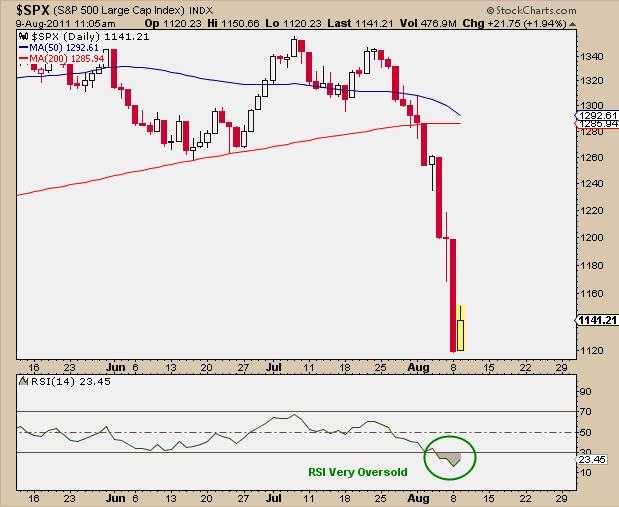 According to Bloomberg – The 14-day Relative Strength Index (RSI) for the Standard & Poor’s 500 Index dropped to 16.5 yesterday, the lowest level in almost 10 years. The RSI has been below 30 since Aug. 4, matching the three-day streak ended March 9, 2009, when the S&P500 sank to a 12-year low and marked the bottom of the worst bear market since the Great Depression.

“RSI identifies possible turning points by measuring the degree that gains and losses outpace each other. While readings of 30 or less typically are considered evidence that an index may rebound, the current streak suggests investors are reluctant to buy, making a sustained rally less likely…….The market just isn’t responding to the oversold condition. Just because things are oversold doesn’t guarantee there is going to be a bounce…..In a bull market, when you get a very quick oversold condition, the market often bounces. In a bear market, you sometimes get persistent oversold conditions and at this point we don’t know if this is the start of a bear market.”

“The S&P 500 surged 102 percent from March 2009 through the end of April this year and has since fallen 18 percent. While a bounce may be likely, it won’t be enough to drive the S&P 500 to new highs….When you have these extremes, sometimes these can be a major warning sign….When things are breaking down, it shows something is not right….If you’re in a bull market, you don’t get this oversold. Something under the surface is severely broken.”

When I see RSI at oversold conditions (below 30), I typically consider that particular oscillator as being in Bear Market Mode. It is rare for it to immediately bounce back to overbought levels (above 70). This is the only thing that would nullify the current Bear Market Mode reading for the S&P500. It happens, but it’s rare. The technicians quoted above make some very good points. We should get a nice bounce at that point, but it’s going to take a lot of work to get this market back to new highs.