Have you heard that story yet about how Amazon is destroying traditional retailers?

Let me ask you: Is this actually the case? Is this it for retailers? It’s over?

Fortunately we have actual data that can help us answer this question. We’re not making guesses based on estimates that will be revised 20 times over the next few quarters. As Technicians we know what is actually taking place between the buyers and sellers for these stocks. It’s up to us to make the correct interpretations, of course, but that price data is the only reliable data in existence when it comes to retail stocks.

This is the infamous chart of the S&P Retail Index, which is equally weighted. So in this chart, Amazon does not represent a large percentage of the index. Each retail stock, about 94 of them, are weighted approximately the same across the board. 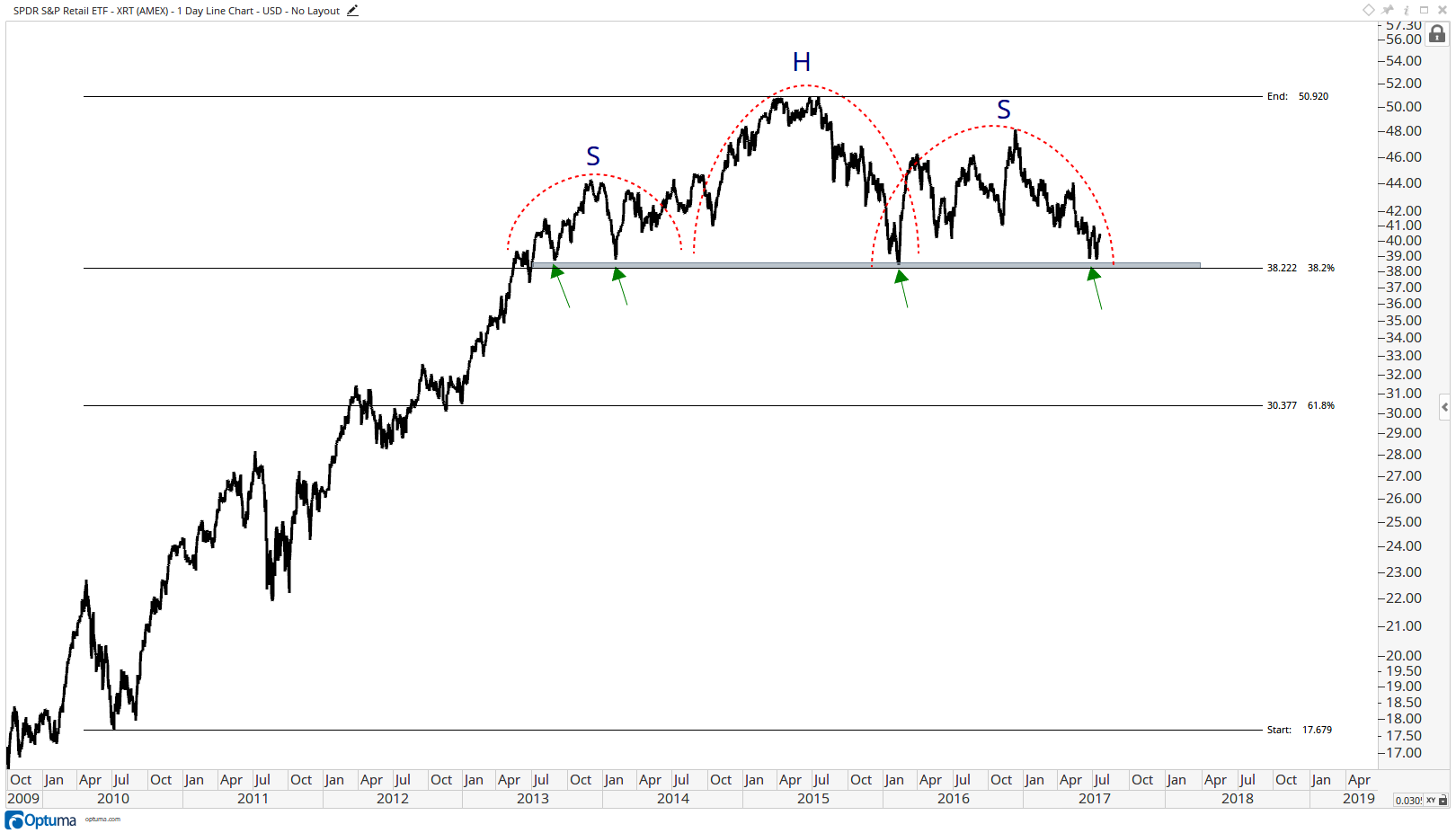 You can see what some might call a “Head & Shoulders Top”. Although a valid pattern that we have seen in the past, this is actually one of the more rare price patterns throughout history. Remember, markets trend, by nature. So a “Reversal Pattern”, which is what a Head & Shoulders Top is supposed to do, reverse a trend, isn’t something we see too often. What occurs more frequently is the perception of said top, when in actuality it is just a continuation pattern that ends in a swift rally higher. So you tell me: Is this a massive 5-year top in Retailers?

While we’re on the subject of failed head & shoulders tops, let’s remember what happens when they are not what they might appear to be to the average chart observer. Here is a good example just after the 2008-2009 stock market crash when everyone thought they were a technician, all of a sudden. This is the S&P500 in Summer of 2010: they all thought it was a Head & Shoulders Top: 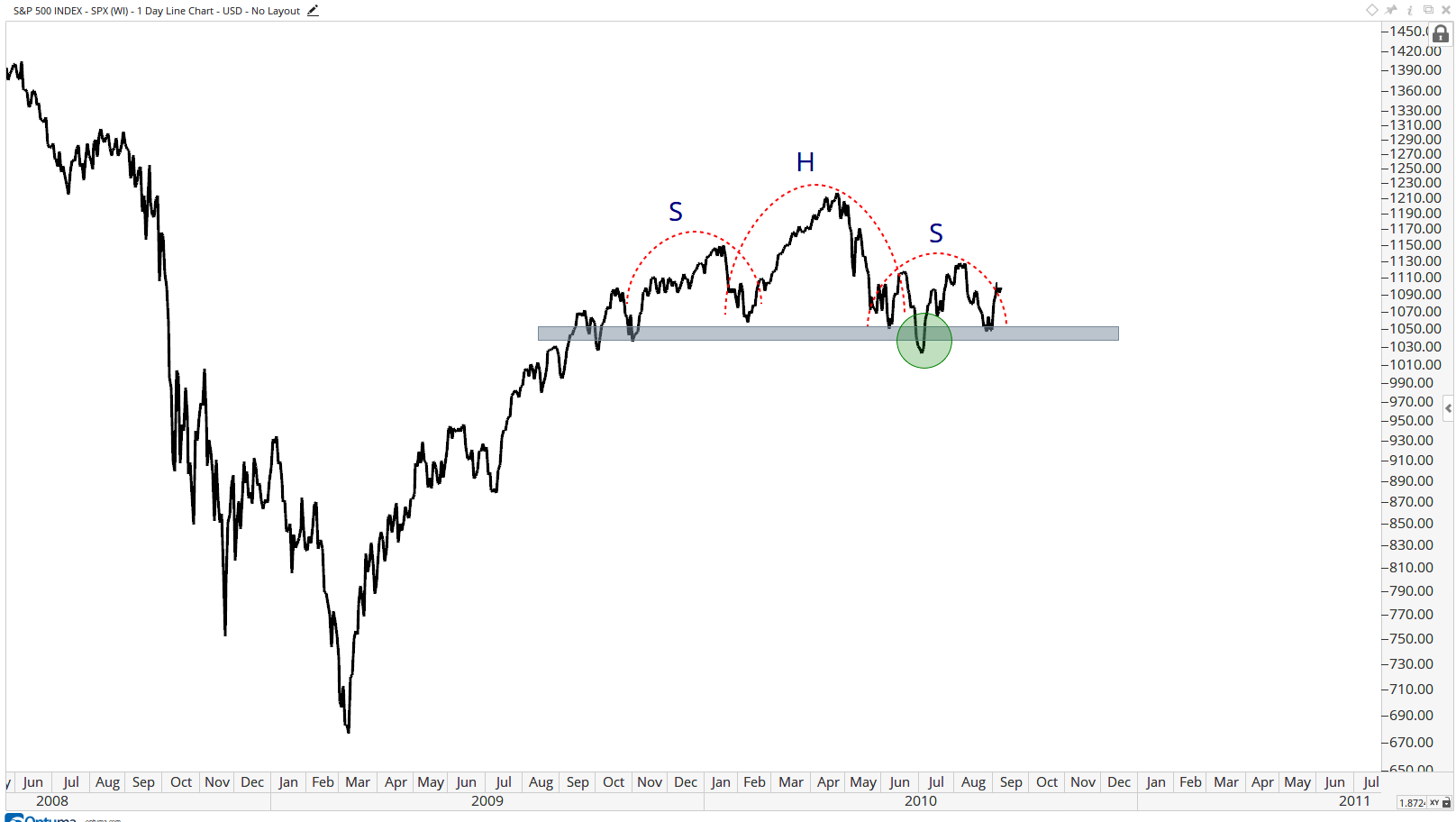 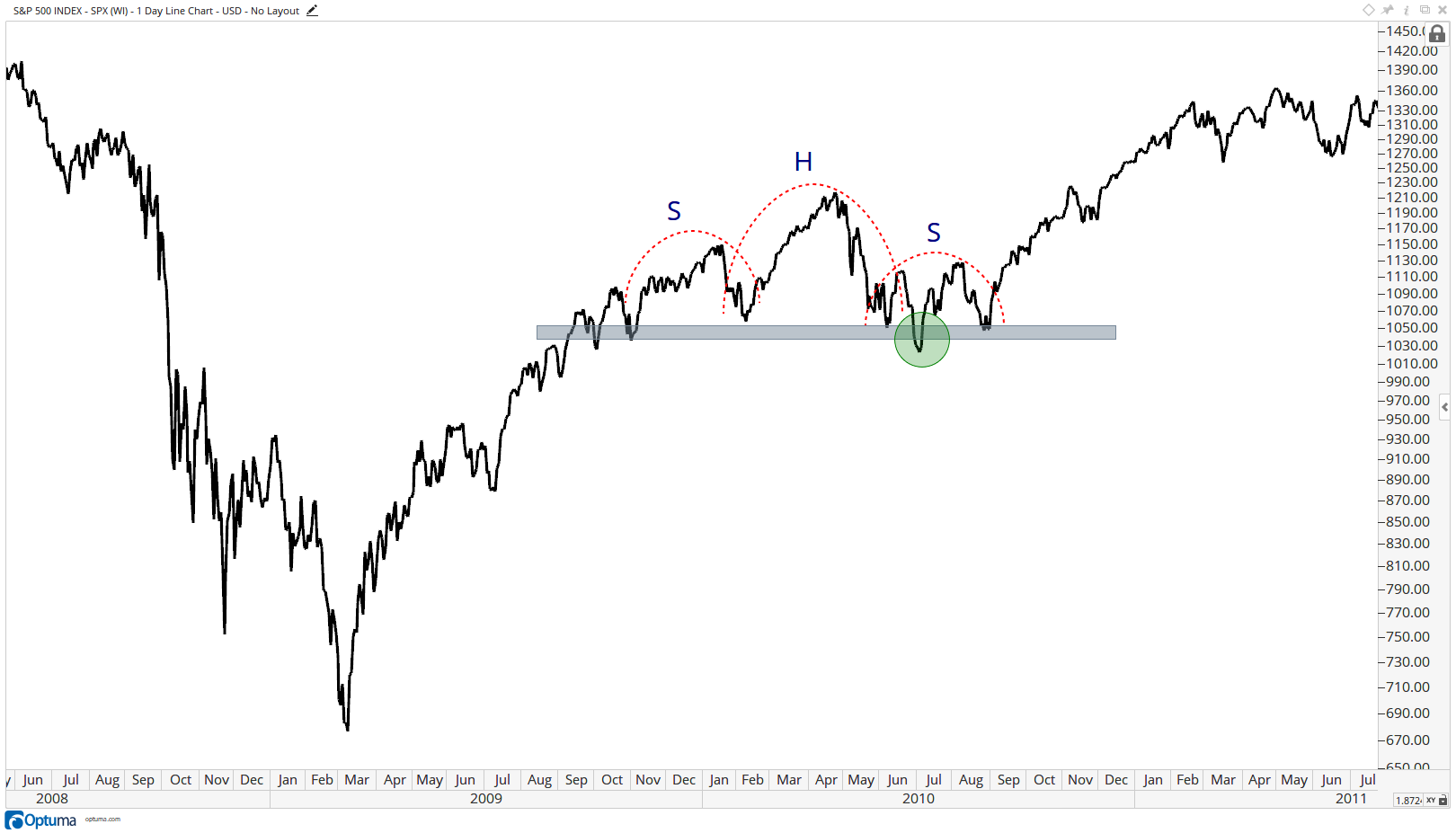 More recently there was a big fuss being made about the “Head & Shoulders Top” in Financials being put in during the first half of this year. Just as this “top” was supposed to be completed last month, I was more than happy to take the other side. I thought there was a great risk/reward long 2 months ago and I still think they go higher from here: 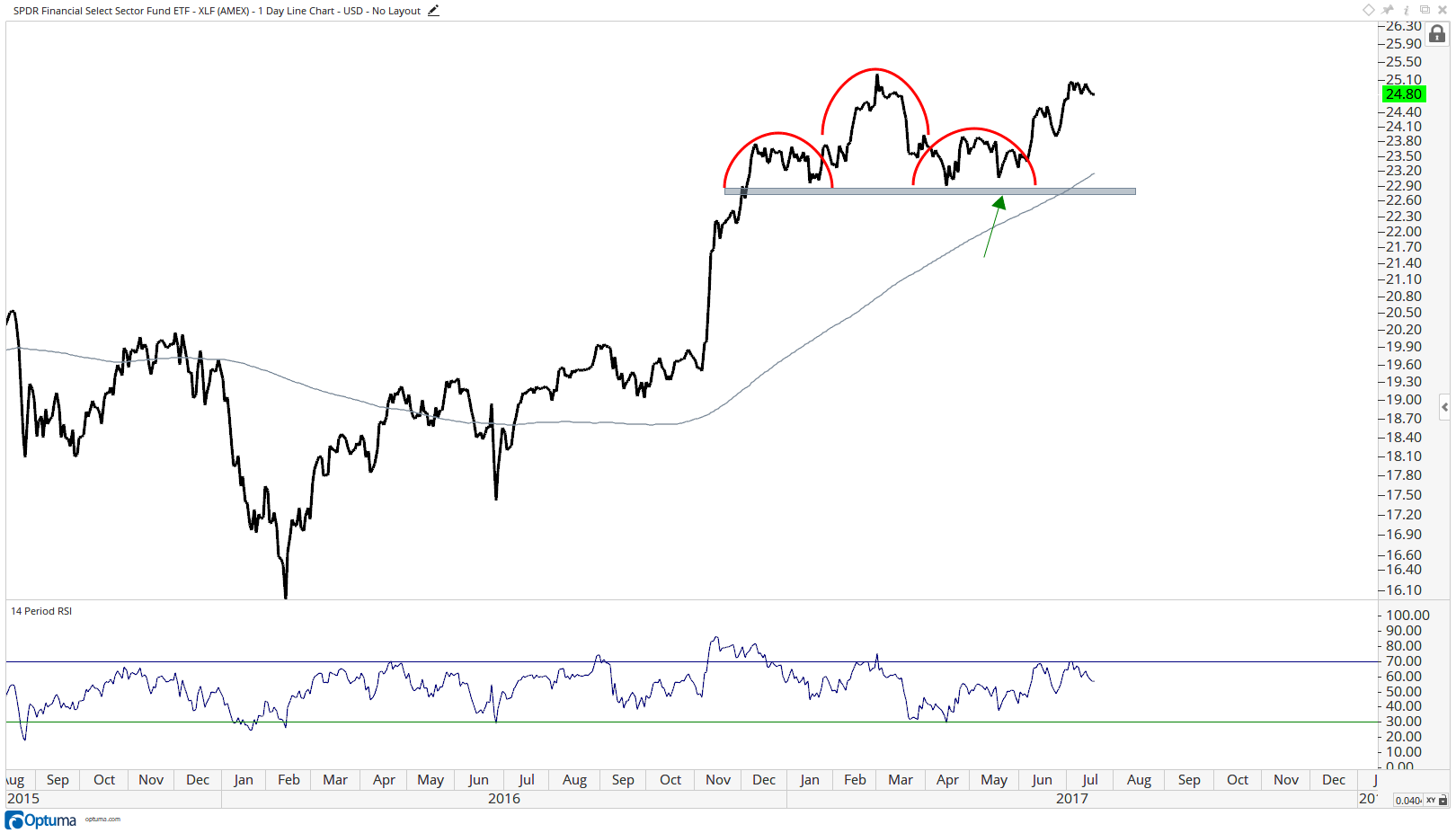 We saw the same “topping pattern” in Broker Dealers. They thought it was clear that they would break down and complete their shampoo pattern. Again, the risk/reward within an uptrend was clearly best from the long side. I still think $IAI breaks out to all-time highs and continues to rip higher. 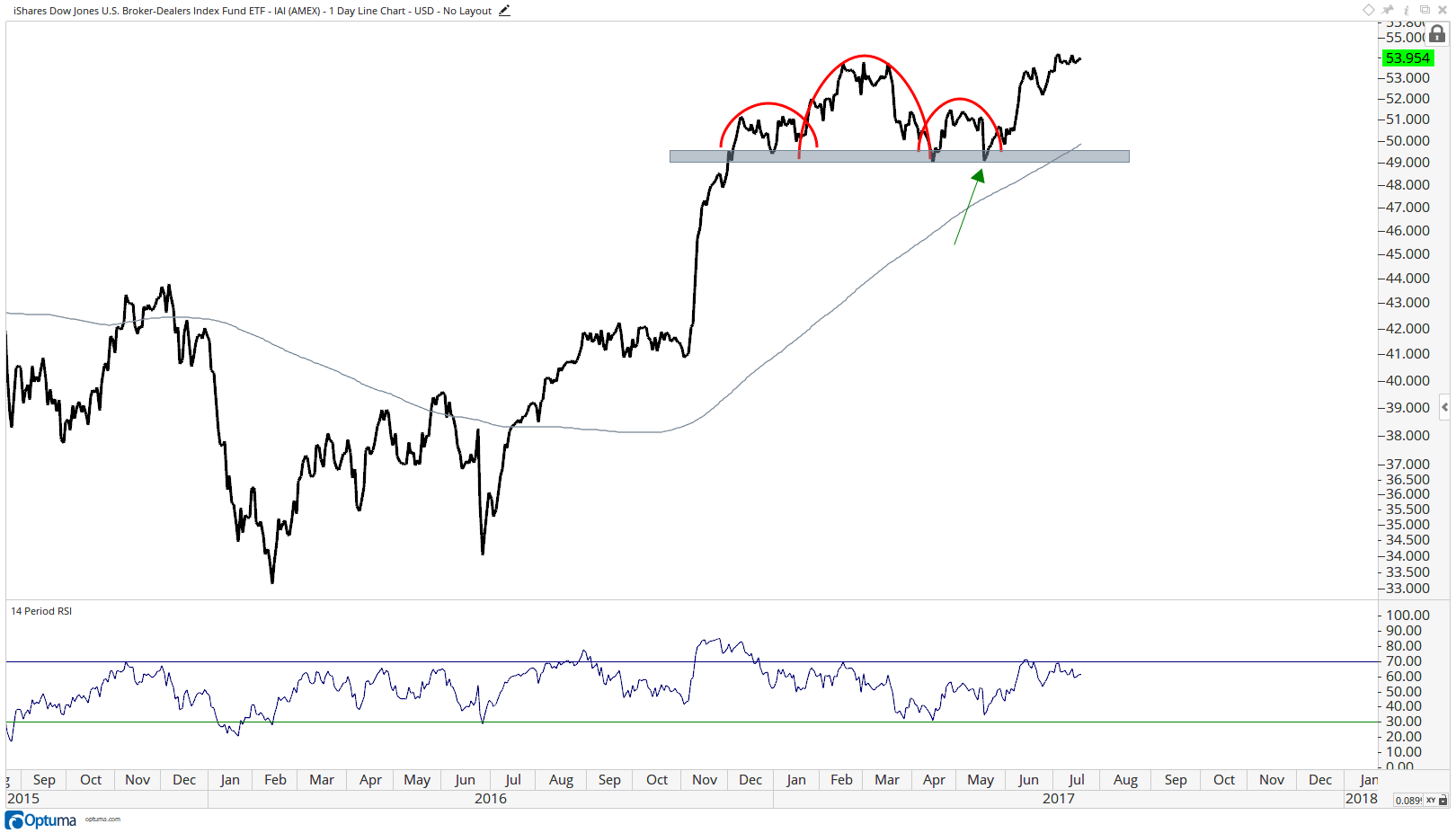 I’m not saying that what we’re seeing in Retail is the same as the examples mentioned above. But I do think it’s important to not only recognize that these topping formation are rare, but also the implications of when they are not what they might appear to be. You get face-rippers. So let’s keep that in mind when looking at this massive 4-year “top” in Retail.

Let’s look at it again:

What do you think? Is it over? Are you waiting for a break to short it? Are you already short? Or are you buying this for the upcoming face-ripper?

I have a workbook with over 200 charts that is only Retail. These include all of the components of the S&P Retail Index on multiple timeframes, breadth indicators that I’ve custom built for this sector and ratios comparing the equal-weighted vs cap-weighted retail indexes. Going through this process helps me come up with a better evidence-based conclusion, rather than just looking at this one chart of the Retail Index with a potential Head & Shoulders top.

There is more to technical analysis than just looking for some stupid pattern. We need to open the hood, like a mechanic would do to see what’s wrong with the car, or maybe there isn’t anything even wrong at all. The mechanic can’t diagnose the issue by just looking at the vehicle. A Doctor won’t be able to tell you if you’re sick or healthy unless he checks to see what is going on inside of you. Sure, he might have a few guesses based on your appearance, but you’re not getting any prescriptions until tests are given first.

Why should this be any different? Let’s look inside!

For access to this content, you must be a premium member of All Star Charts. Please login below or start your risk-free 30 day trial today.