Today I want to focus on an interesting chart that we haven’t brought up in a while. This is the relative outperformance we’ve seen from the growth stocks compared with the value names since the Fall of 2008. History might show that the US Stock market bottomed out in March of 2009. And if you only look at the S&P500 or the Dow Jones Industrial Average, this might be true. But let’s not forget that the majority of stocks bottomed out in the Fall of 2008 and the internals and breadth of the market improved well before March as well.

One of the improvements that we saw internally before the indexes themselves bottomed out was clearly seen as money went back into Growth and out of Value months before the market bottomed out. Today, unfortunately, we are actually seeing the complete opposite. We are now witnessing the shift back into Value and out of Growth.

Here is a chart showing the relative performance of the S&P500 Growth Index (red) compared with the S&P500 Value Index (blue). The S&P500 itself is held constant in green: 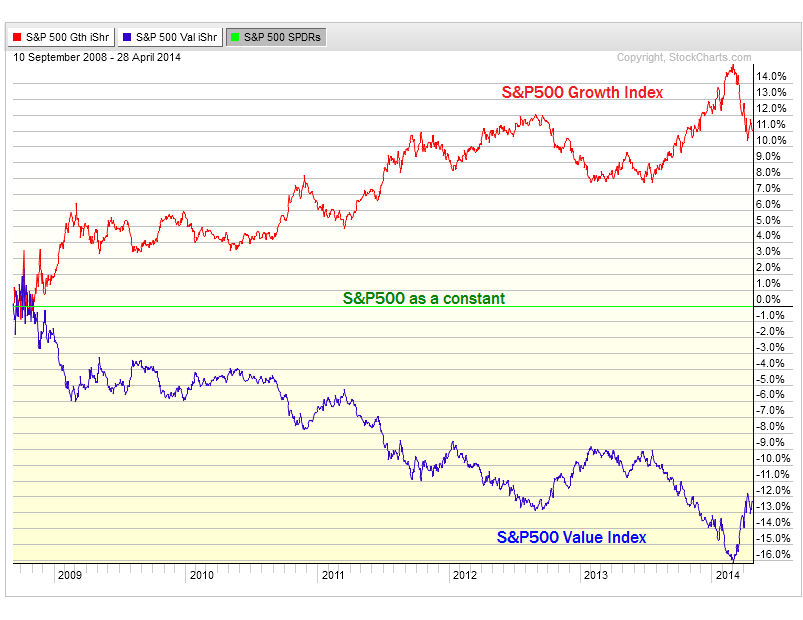 I hate to say this, but it looks clear to me that the reversion process has begun. We’re seeing money flowing out of the Growth names and into value. Some of the big components that make up the Growth Index ($IVW) include $AAPL $GOOG $MSFT $JNJ $QCOM and $AMZN. As money flows out of these guys on a relative basis, they are buying up the Value Index names ($IVE). A few of the top holdings are $XOM $GE $WFC $JPM $CVX and $BRKB.

Now remember, this rotation we’re seeing is strictly on a relative basis. This is S&P500 Value over S&P500 Growth. They can both go down together, it’s just that one will outperform the other. The way I see it, when money started to flow into growth over value, the internals of the market were improving in the 4th quarter of 2008, warning of an impending bottom. Today we’re seeing that spread peak and start to flip back into Value and out of Growth. Are we getting a similar warning about what the S&P500 will be doing soon?

I think so. We’re seeing similar bearish developments in the Bond Market and some potential topping patterns in the Nasdaq. The rotation into Energy lately is very typical of late cycle strength and also points to an end to this bull market in stocks. I’m a weight-of-the-evidence kind of guy. So I’m not of fan of the US Stock Market Averages up here.

I’d be careful being long only in the stock market. I think at best we should be positioned much more neutral in that particular asset class. I like the reversion trade here. Look at the list of Energy stocks, specifically the big integrated names. These are big components of the Value index and should continue to outperform going forward.

I’ll try my best to follow up on this chart soon.

REGISTER HERE for more information on how to access updates on this chart with commentary on a weekly basis.