I’m not so sure. This seems to be a big topic of conversation today. But I’m still not convinced that it’s time. Can they bottom out here relatively? Of course. But to me, if they do it would be coming at a pretty random area. However, let’s try to stay objective and look at just prices.

The first chart is the Emerging Markets ETF ($EEM). Tuesday morning’s gap lower took this below some key support levels that include last year’s November lows and the 61.8% Fibonacci retracement off the summer lows. If this is the bottom in $EEM then hey, what can I tell you? It came at a random level and I just missed it. I suppose you can come talk to me if we’re back above $40. Perhaps then maybe I can be convinced that they might be a long: 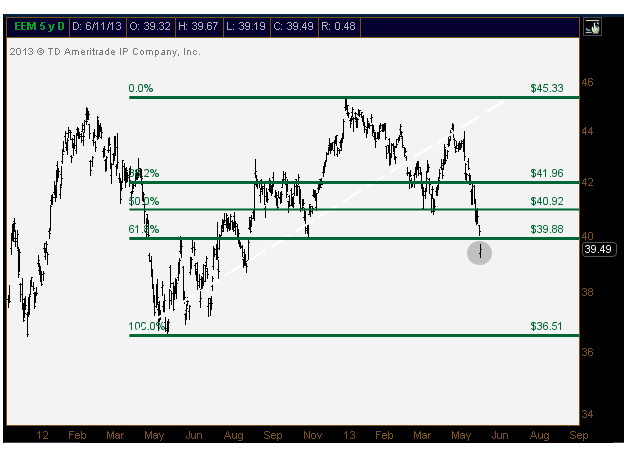 Now on a relative basis, I’d be lying if I didn’t say there were some interesting developments. We’re really pushing it here, but the $EEM:$SPY chart is meeting a few trendlines coming from different directions. On a daily closing basis, we’re approaching the uptrend line that takes you back to the 2006 lows (blue dotted line). You can also make the argument that the lows line up from this multi-year down trend. But again, I really think we’re pushing it. 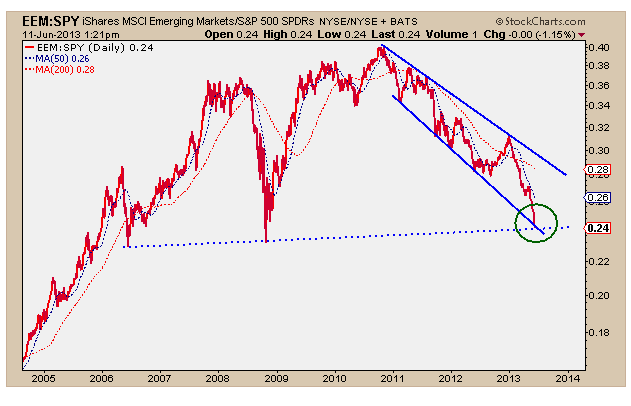 I suppose on a relative basis, the risk/reward here isn’t horrible. But on an absolute basis, EEM is tough to get involved with, at least for right now. I guess we’ll see how this week closes up and we’ll decide then. It’s just not for me right now.

The last chart is Brazil. If you had to pick one emerging market that is at an area where you might want to give it a shot, I guess it’s the beat up Brazil. Prices are near the 2011 & 2012 lows and still holding the 61.8% Fibonacci retracement off the low lows of 08. But again, nothing that I’m in love with. 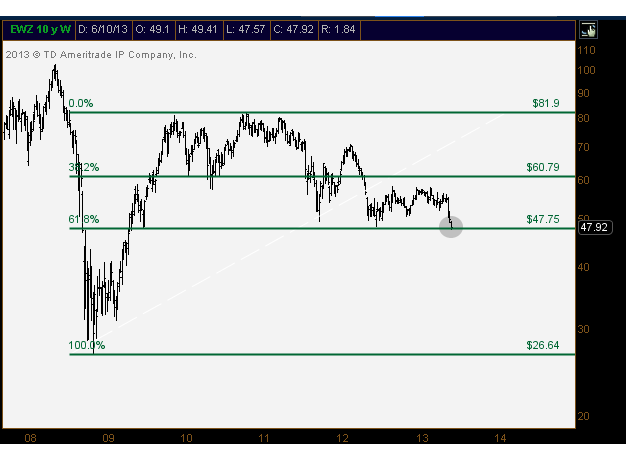 That’s how I see EM right now. I wish I had more conviction. But it’s just not there. What do you guys think?