Welcome to our “Under The Hood” column for the week ended September 11, 2020.

What we do is analyze the most popular stocks during the week and find opportunities to either join in and ride these momentum names higher, or fade the crowd and bet against them.

We use a variety of sources to generate the list of most popular names. There are so many new data sources available that all we need to do is organize and curate them in a way that shows us exactly what we want: A list of stocks that are seeing an unusual increase in investor interest.

Whether we’re measuring increasing interest based on large institutional purchases, unusual options activity, or simply our proprietary lists of trending tickers… there is a lot of overlap.

The bottom line is there are a million ways to skin the cat. Relying on our entire arsenal of data makes us confident that we’re producing the best list each week and gives us more optionality in terms of finding the most favorable trade setups for our clients.

Here is this week’s list of the most popular stocks. Now, let’s see what’s going on “under the hood” in these hot names. 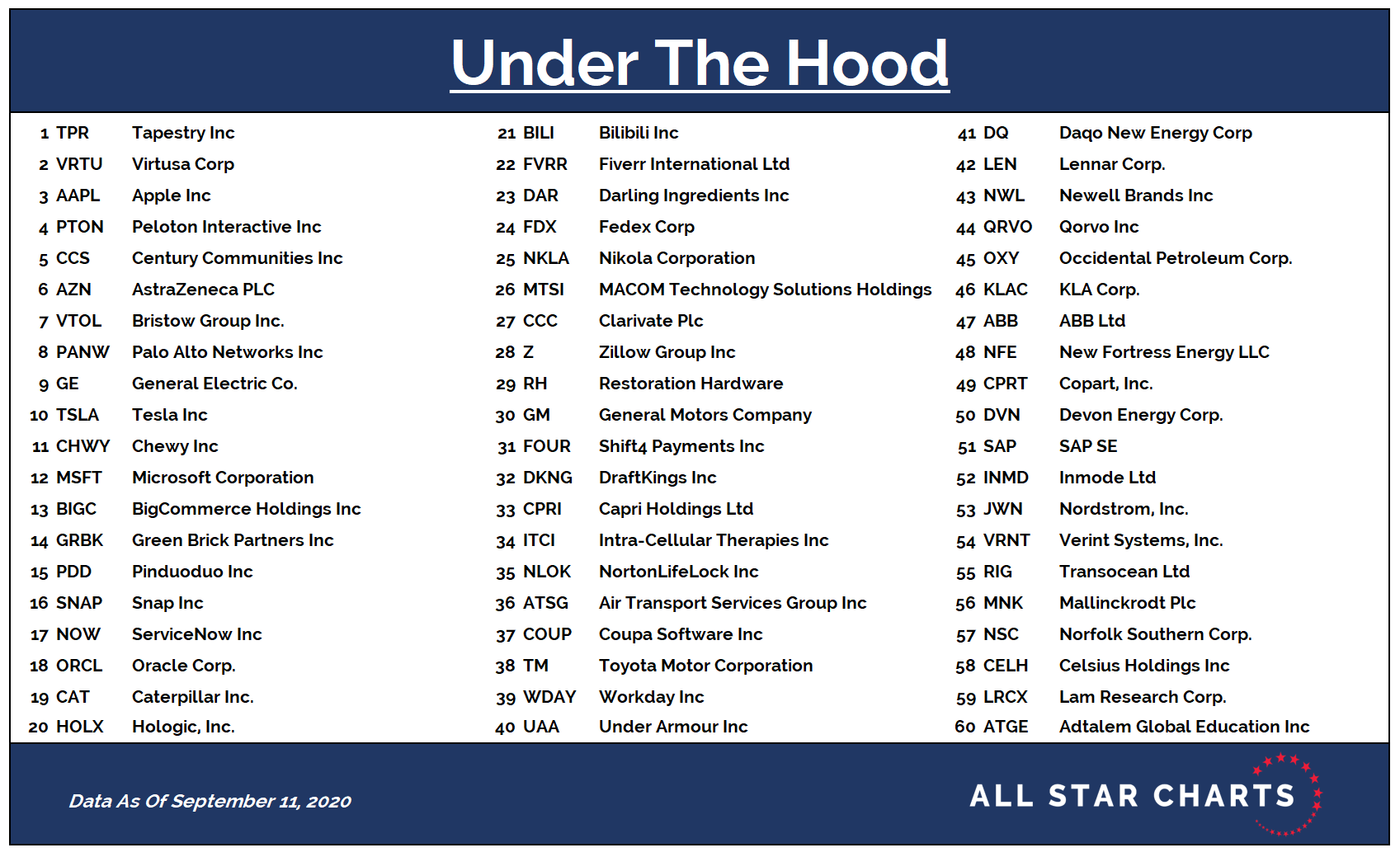 Let’s start with a quick review of some names on this week’s list which we’ve already put out trade ideas on.

First is General Electric $GE, which we want to be short as it violated our risk-level of 6 this week. Read more about the setup in our July 31st edition as well as some more recent thoughts from JC.

After reporting a top and bottom-line beat and strong guidance this week, Peloton $PTON came within pennies of our price target before reversing lower.

Considering these things, we want to take profits in Peloton as it’s probably riding nowhere fast in the coming weeks. Get it? Like the bike.

Bottom line, now that our target has been achieved and a handful of bearish characteristics showed up on the chart this week, the risk is to the downside and we believe there is a near-term opportunity cost in owning this name.

While we expect some sideways or corrective action in the coming weeks, we’ll definitely keep it on our radar for future opportunities. The primary trend remains higher on both an absolute and relative basis.

Electric Vehicle Manufacturer, Nio Inc $NIO is another name that recently hit our target at 18, returning more than 60% on the trade in less than two months. The stock continues to exhibit impressive relative strength as it’s trading right near record highs vs the broader market.

We can either take profits, continue to own it, or both (never wrong with taking a little off the table). Although, we only want to be long if we’re above 18 with a 3-6 month target at the next Fibonacci extension above 28.

You can refer to the chart from our July column here.

Next, we have Snap Inc $SNAP, which we covered when it was breaking out back in June.

It hit our objective pretty quickly and has been correcting since. We want to put it back on our radar as the stock has shown some relative strength in recent weeks as it approaches its former highs at the 161.8% extension just above 26. If price makes a sustained move back above this level, we think 37 is the next stop.

Last, we have an update on a stock we’ve been stalking and think is ready to finally break out. Here’s Draftkings $DKNG which we covered just a few weeks ago.

The stock has been consolidating in multi-month bases on both relative and absolute terms since it more than quadrupled off its March lows. We want to buy DKNG on strength back above its former highs around 44.50 with a 3-6 month target at 66.

Now for this week’s new charts.

The talk of the town has been the weakness in technology stocks and rotation into other sectors. So, how bad is it?

This is definitely true for some of the tech stocks on our list this week such as Intel $INTC, Cisco $CSCO, Oracle $ORCL, Lam Research $LRCX, and KLA Corp $KLAC. All of these names have suffered serious structural damage recently.

The ones we want to stay away from all tend to have similar bearish characteristics. Here’s Coupa Software $COUP as an example.

The stock has been a secular leader for years but price broke down aggressively this week.

I’ve marked up the chart with some of the things we look for to identify potential future weakness. Using a stock like Coupa, which remains in a structural uptrend, is a good reminder that this kind of selling pressure can happen regardless of how strong the underlying trend is. While stocks in strong uptrends are less likely to see a sharp selloff, nothing is ever immune.

Here’s a little list of developments over the past few weeks/months that hinted towards the short-term weakness we just saw from Coupa.

If you take a look at some of the other tech stocks mentioned above, you’ll notice similar characteristics that are likely even more severe as Coupa has been the strongest of them all.

On the other hand, we identified plenty of other tech names from this week’s list that are holding up just fine and we’d want to be buying weakness in. Examples include Qorvo $QRVO, ServiceNow $NOW, and some others we’ll outline trade ideas in below.

The real takeaway for tech right now is that it’s simply a mixed bag over the short and intermediate-term. It might be harder to find bullish setups, but they’re still out there. And due to the long-term strength at the sector level, the best course of action is not be looking for short setups, but to simply avoid the weak.

Another strategy is to look for the tech names in other sectors that are catching some of that short-term rotation and outperforming the market.

For example, Consumer Discretionary $XLY is still making new all-time relative highs despite the recent selloff, and there are plenty of “techy” names in there.

We also offer a separate subscription to purchase the Under The Hood column ala carte. If you’re interested, click here to learn more.