Welcome to our latest edition of “Under The Hood.” Read more about it here.

In this column, we analyze the most popular Robinhood stocks over the trailing week and find opportunities to either join in and ride these momentum names higher, or fade the crowd and bet against them.

This week we have a handful of trade ideas on the long side in a number of names that continue to exhibit impressive relative strength.

Let’s dive into it. Here is this week’s list of most popular stocks, measured by net increases in Robinhood accounts that hold shares. 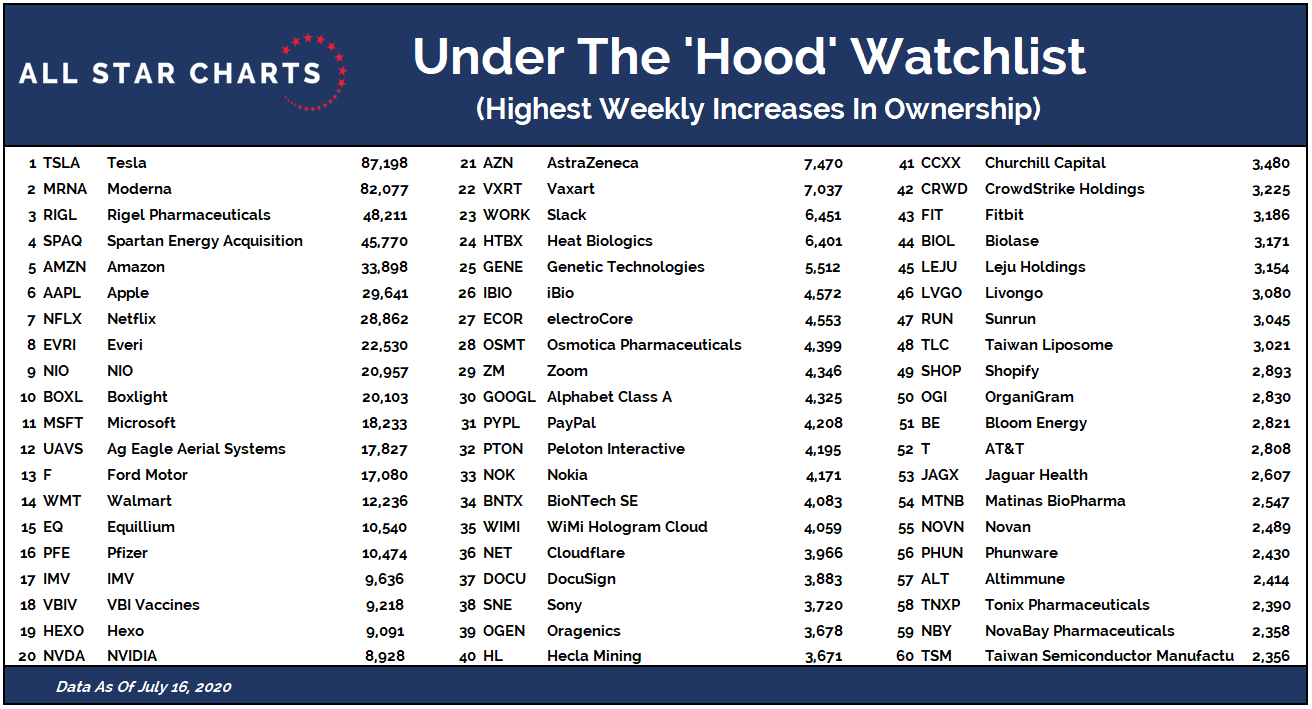 We’ll take it from the top this week and begin with the #1 stock on the list. We’ve recommended Tesla $TSLA time and again this year as it has continued to achieve our price targets in impressive fashion.

With that said, the risk/reward is no longer what it was for this name so we’d definitely suggest taking profits up here if you still have a position.

As JC so eloquently put it on Twitter this morning, “all our targets have been hit… it’s someone else’s problem now.”

As we mentioned in our last column, Tesla was well on its way to our primary objective at 1,267. Well, it took that out right away and even came within points of our secondary objective at 1,800 earlier this week.

An interesting observation about Tesla is that over the past month or so as we’ve ridden the trend higher, it’s consistently been on the most popular stock list but never at an extreme like this week. It was increasing by about 10,000 – 20,000 accounts per week. Still very high, but nowhere’s near the 87,000+ accounts that added the stock this past week.

Seems like sentiment is getting overly frothy in the name. Another reason why we think it’s prudent to take our gains here and put that money to work in better opportunities.

Let’s check in on another mega-cap leader. Here’s Apple $AAPL. Similar to Tesla, the stock is trading at/near all-time highs on both relative and absolute terms.

In our Q3 playbook, we wrote about how we’re seeing many of the strongest areas within Technology hit logical levels of overhead supply. Apple is just another example of this as prices are consolidating at the first Fibonacci extension from its Q1 drawdown. We’d rather be taking profits here and seeing how price reacts to this level.

You can see evidence of Microsoft losing steam here as price has been unable to hit its extension level and is now rolling over on a relative basis.

Now for another big name. Here’s a weekly chart of Ford $F. The only thing this company has in common with Tesla is that they both make cars.

As for the charts, the two couldn’t look more different. Ford is testing its all-time relative lows from the Financial Crisis. We never want to be buying charts like this. Although, with risk-appetite picking up for the broader market, we also don’t want to be shorting it in the case we see some mean-reversion and rotation into these beaten-down names.

Here’s a name that we put a trade idea on last month, and after continued consolidation above our risk level, we like the same setup just as much, if not more, now. Here is Slack Technologies $WORK.

Our risk is very limited and clearly defined at current prices. As long as we’re above the 29.50-30.50 area, we want to be long with a 1-3 month target back to the June highs and Fibonacci extension at 40.

Now for this week’s trade setups.