Welcome to this week’s edition of “Under The Hood.”

What we do is analyze the most popular stocks over the trailing week and find opportunities to either join in and ride these momentum names higher, or fade the crowd and bet against them.

We have some new additions coming for how we generate the list of most popular names, which we’ll explain more each week as we add new data sets. There are so many new data sources popping up that all we need to do is organize them in a way that shows us exactly what we want: A list of stocks that are seeing an unusual increase in investor interest.

The S&P 500 finally achieved new highs this week. The market is clicking on all cylinders as breadth and participation continues to broaden, and favorable risk/reward setups are popping up all over the place. Let’s dive into the most popular tickers this week and see what’s going on “under the hood” in these hot names.

Here’s this week’s list. Now that we no longer have Robinhood data, it’s being derived in a more subjective manner using inputs from a variety of our proprietary data sources. 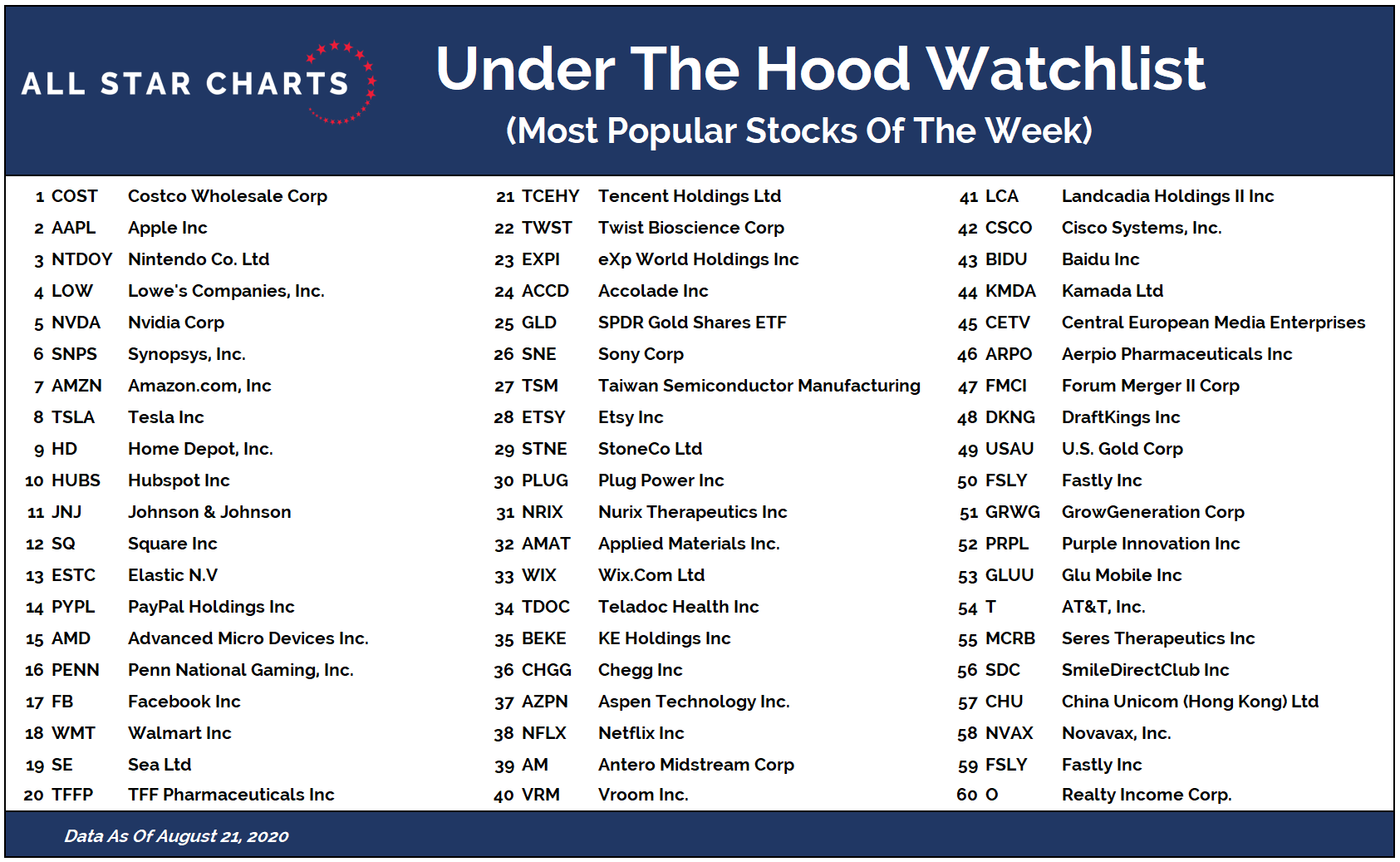 We have a killer lineup of trade setups this week, so the majority of this post is going to be locked up for our Premium and Under The Hood subscribers. With that said, we’ll start with some older setups that are still in play along with some charts we want to keep on our radar for the future.

Here is DraftKings $DKNG, which has been consolidating for nearly three months following a strong 300%+ surge off its March lows.

Bullish relative strength, primary uptrends on both absolute and relative terms, and a constructive base forming between our current and prior objective. There is a lot to like here in the long-run, but the risk/reward is not favorable at current levels. We either want to be buying this one on weakness towards 30-31, or on strength above former all-time highs above 44. Until one of these scenarios plays out, patience remains the best course of action.

Here’s a popular household name, Walmart $WMT, which we outlined a trade setup for in our July 17th edition of Under The Hood.

Price has gone absolutely nowhere in the month since, but we like the same setup as much today as we did a month ago. Remember, good things take time, and the same holds true for good chart patterns. Patience pays, especially with slow-moving blue-chip stocks like Walmart.

The most important thing I’m watching on this chart is the relative strength trend in the lower pane. If Walmart can break out to fresh relative highs it would be a very bullish development. If it fails on a relative basis, we probably won’t be in the trade anyways as price is likely to violate our risk level on an absolute basis as well.

With that said, we think this is the lower probability outcome so we still want to own Walmart as long as we’re above 127.50 with a 1-3 month target at 155. As always, we’d rather put the onus on the market to prove us wrong, in which case our risk is extremely limited, so if/when that happens we’ll happily take our small loss and employ our capital in more favorable assets.

Here’s a fun new name, Sea Ltd $SE, which is the leading e-commerce business in Southeast Asia and Taiwan. Think Amazon $AMZN, Alibaba $BABA, JD.com $JD, Mercado Libre $MELI, and Jumia $JMIA – Sea Ltd is cut from the same cloth… a definite positive as it’s hard to find a better group of stocks to be associated with.

It’s been on the list almost every week for the past few months but the trend has been so parabolic, it’s been tough to get in. While this can make a Technicians job more difficult, it’s certainly not bearish. In fact, one common characteristic of the strongest uptrends is not giving investors an easy entry. This often creates a demand-driven catalyst for the stock price as participants tend to chase the stock higher.

The uptrend has appeared to cool off a bit and looks as though it may be entering a period of consolidation after tripling in value over the trailing four months. It would be healthy for price to digest its recent gains at current levels, but based on the velocity of the current uptrend it’d be no surprise if SE blew right through our current objective at 155. We won’t know until we have more data, so we want to be prepared.

Next up is a recent IPO that operates in the Genomics space, which happens to be one of our favorite thematic/niche areas of the market. Here’s Accolade Inc $ACCD, which popped up on our radar this week due to a high level of institutional buying from one of the world’s top investment managers which focuses on innovative and disruptive companies.

While we’re only working with less than two months of data, ACCD already has the early characteristics of a future leader. The stock is trending steadily higher on both absolute and relative terms. While there is nothing actionable at current levels, we want to keep this one on our radar. If and when we get a breakout to new highs above the 41-42 zone, we’ll be looking for a quick move higher towards 49-50.

Maybe I’m biased because I’ve been screaming about this theme going on five years now, but in my opinion, the Genomics and DNA-sequencing industries have more tailwinds behind them looking out over the next few decades than any other growth area of the market. This is veritably the future of Health Care… The true “Tech of Biotech.”

So, let’s stick with this theme as we jump into this week’s trade ideas, starting with a Genomics name that IS actionable and currently set up nicely for a long opportunity.

We also offer a separate subscription to purchase the Under The Hood column ala carte. If you’re interested, click here to learn more.