Welcome to this week’s edition of “Under The Hood.” You can read more about the column here.

What we do is analyze the most popular Robinhood stocks over the trailing week and find opportunities to either join in and ride these momentum names higher, or fade the crowd and bet against them. This was a busy week so let’s get right into it.

It was surprising not to see Facebook $FB on this week’s most popular list heading into earnings. All the other big tech names were. We’ll cover this more below. 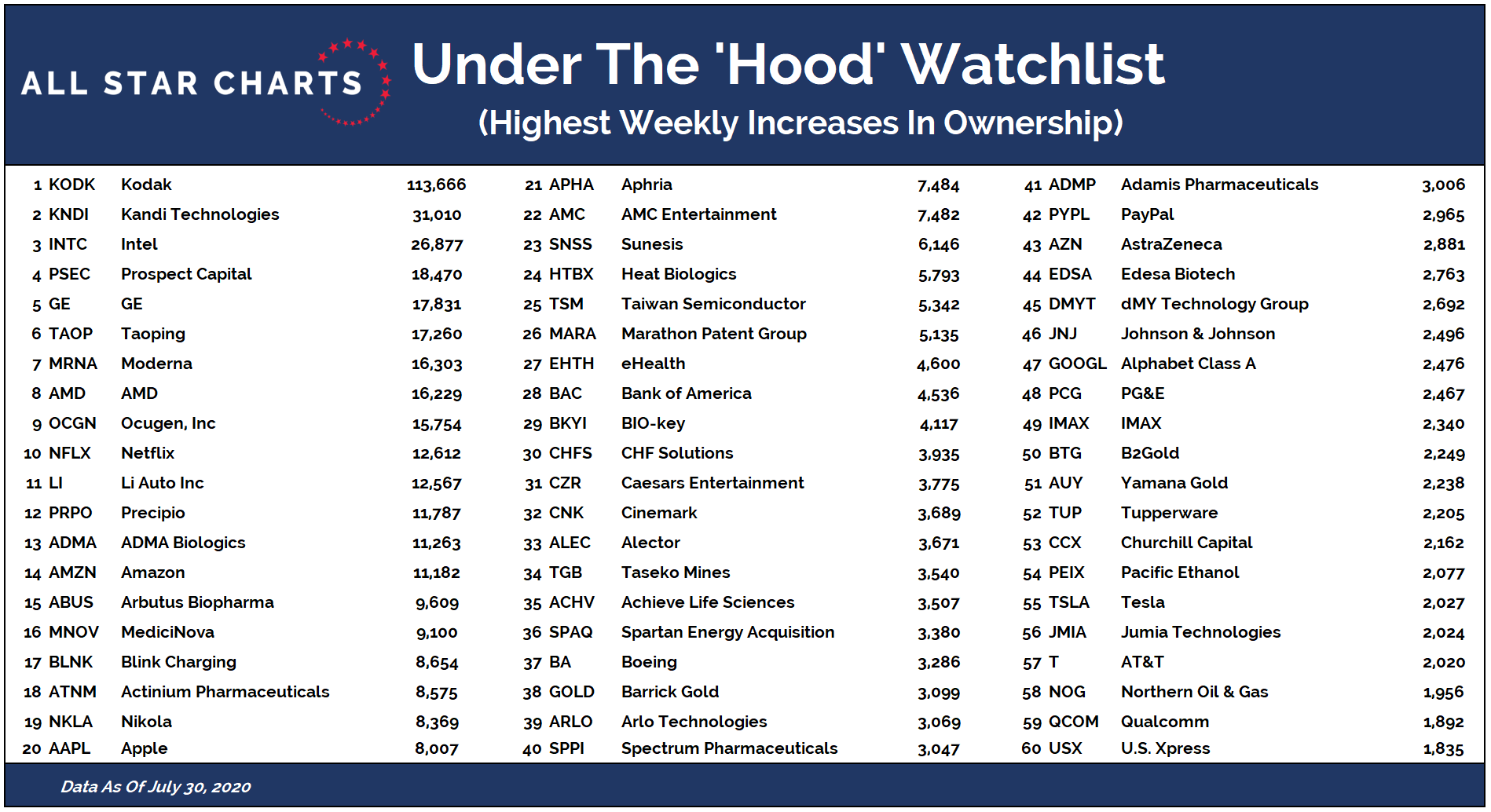 Kodak $KODK took this week’s top spot with 113,000 new accounts and was a big winner from both a performance and headline perspective.  The stock went from 2 to as high as 60 this week on news that it is taking a government loan to build a drug-ingredient business. Funny, because I always thought they made cameras…

There are no analysts covering the company and no targets to help (or hurt) investors, but we always have price. Here’s what 2,700% in a week looks like.

Notice how both gaps reacted to key prior highs and lows. Even if the second breakaway gap doesn’t fill, there is a lot of price memory at the top of gap support in the 17.50 – 17.75 area, making it a logical level for prices to pull back to. There is nothing actionable at current levels.

New all-time relative lows as price gets rejected at key former support, turned resistance near 5.50. We think you could fade strength against this level and bet on price revisiting its year-to-date lows. Although, we want to be careful to only short this on a move back towards its recent highs as the risk/reward isn’t great at current levels.

Here’s US Xpress Enterprises $USX as an example of the kind of stock we do like.

After building a healthy base, USX gapped above its IPO-date AVWAP as price made new highs on both absolute and relative terms this week. If USX is above 10, we think prices eventually revisit their all-time highs above 16. On the other hand, if we’re not above 10 we want nothing to do with this stock as there could be plenty of chop and backing and filling around current levels.

Advanced Micro Devices $AMD and Intel $INTC crept their way into the top 10 this week as both experienced big moves recently on the heels of earnings. These stocks are headed in two very different directions though.

We got long AMD back in March when prices broke above their dot-com highs near 47 with a target at 75. Now that we’re there, we want to take our profits and see how price digests its recent gains. We continue to like AMD over the long-run as it just recently resolved higher from a 20-year base so should have plenty further upside.

Intel $INTC on the other hand, we don’t like so much. It just made fresh 25-year lows against the Philadelphia Semiconductors Index $SOX. When I look at its relative performance all I can think of is “opportunity cost.” As always, we’d rather be betting on the strongest names. Intel is definitely not one of them.

On an absolute basis, Intel has been working on a massive base similar to AMD’s. The one major difference is that while AMD was able to break out and make a sustained move higher, Intel is rolling over and failing beneath its 2000 highs.

There are too many semiconductor stocks breaking out and showing relative strength right now to waste capital on a laggard like Intel.