We just saw a 20% move in the S&P500 off the October 4th lows. A break here is obviously well-deserved. The question now becomes – how low do we go? So I can’t think of a better time to call up our old buddy Leonardo Fibonacci.

When putting together Fibonacci levels, some like to use extreme highs & lows and other technicians use closing numbers. I like to use both and look for a zone of potential support. In the chart below, the heavy lines use the extremes and the lighter lines are using closing numbers: 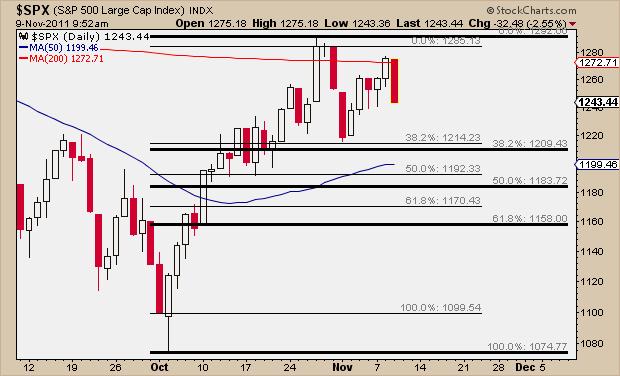 It looks like there is some pretty big time support around 1210-1215 and then 1180-1190 after that. The 50 day moving average has been rising, which is a positive, and gives those levels additional weight.

These Fibonacci Retracements keep coming into play. Even if you don’t care for them, enough people do that if you’re trading actively, you have to recognize that they’re there. Don’t catch falling knives, but look for pivot points to trade off of. I’ve seen it a million times. These pivot points keep coming off these levels.