I wanted to do a quick follow up to my S&P levels post from last week. We’ve held 1635 so far and the S&P500 has actually been consolidating in really healthy way, if you ask me. After global markets corrected in reaction to the Nikkei getting crushed, US stocks have been holding in just fine while other areas around the world continue to sell off. That relative strength has impressed me.

Since last Wednesday the 22nd, $SPX has been coiling in a descending triangle, above key support, in a way that screams continuation to me. We know the trend is up, that’s no secret. So a breakout above this pattern should take us to fresh all time highs. But since we’re in uncharted territory and we don’t have any former support and resistance levels to work off of, our measured move target would be all that we have, at least for now.

The math here is simple: the size of this pattern is 52 points. So a breakout above 1660 would give us a measured move to 1712. We’ll use a 65 minute chart so we can see the levels better: 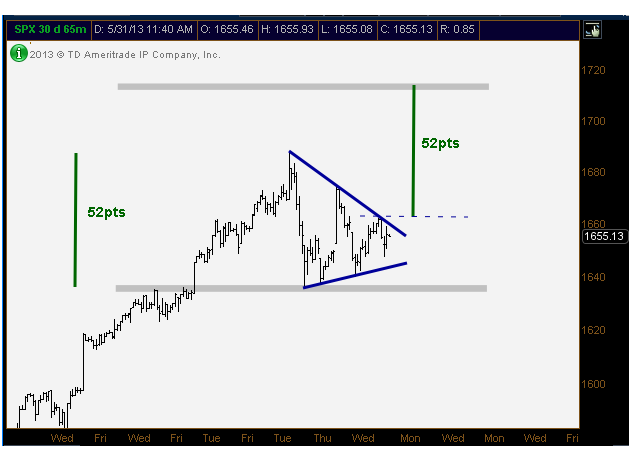 The big time support for now is still 1635 in the S&P500 (shown here in the shaded area). As long as we’re below that then everything mentioned above becomes irrelevant. A swift sell-off down to 1600 and some further consolidation through time is what I would expect to happen in that scenario. As of the time of this writing, S&Ps have yet to break out of this triangle, but we believe that a completion of this pattern would be extremely positive for the US stock market.

Let’s see what the buyers are made of…