I get to talk to traders and investors of all shapes and sizes every day of my life. This is something I like to do for fun, and it’s also a great way to learn. But remember, I do this for a living. So not a day goes by where I’m not talking to market participants.

This has gone on for decades now. Everyone from the largest banks and hedge funds on the planet to recent grads first learning how to trade.

I have a lot of conversations with these investors. And one common theme I’ve heard over the past few months is just how difficult of an environment this currently is.

A lot of traders are getting chopped up in this mess of a market. And it’s not anything new, it’s been messy for quite some time.

So you’re not alone in this.

Please don’t think you are.

We don’t have to pretend like we’re the only ones. There are plenty of other traders thinking the same things, having the same frustrations and wondering if we’re alone.

I think the key difference is, What is everyone is doing about it?

Some are proactive with risk management. Others just close their eyes and pray. Or photoshop lasers in their eyes or whatever.

There are people who still haven’t learned.

They bought a bunch of stocks or cryptos, and were left holding the bag.

So it becomes a, “Now what?” situation.

Long-time readers aren’t in this situation because pretty much all we do is talk about how to avoid putting ourselves in these predicaments.

But for new readers and people reaching out from around the web, I still get questions that are pretty much something like the one above. The names and tickers certainly change with each cycle, but the story is basically the same – they bought a bunch of garbage and didn’t manage risk responsibly.

Here is a copy of one of my responses from earlier this week,

Thanks for reaching out.

Just remember, we’re not financial advisors, so I have no possible way of knowing what you should do. That would depend on your personal objectives, time horizon and risk tolerance. So it’s not my place to answer any of those for you.

But for us, keep in mind that in all of those names you mentioned, we’ve made it very very clear that we want no part of them. This is for some time now, so it’s not anything new.

But I like to think about it like this: These are all liquid assets that you mentioned, which is one button away from cash.

So pretend that you woke up this morning and all your money was sitting in cash. And if you could do anything you wanted with that money, what would you do?

If your answer is not a resounding yes, then I think you have your answer.

Remember, we always want to know where we’re out before we even get in. That prevents us from ever being in these situations.

And to be clear, every successful investor I’ve ever met has been in this predicament. Which is why they became successful, because they put systems in place to avoid being in these situations ever again.

I hope that helps.

What are the important lessons here?

First of all, the only people who are wondering what to do now clearly went into the situation (or situations) without a plan.

What did you think, that you were just always going to be right on every trade?

You won’t be. Why would you think you would?

Granted, I’m sure you didn’t actually believe that you’re infallible. There probably just wasn’t much thinking going on at all prior to entering into those positions.

After you do this long enough, you’ll start entering your trades assuming you’ll be wrong. Many of the best traders I know are actually wrong more often than their right. Yet, they’re still incredibly profitable.

Because they know when to cut losses. They’ve predetermined their exits, before even entering the orders.

The idea is to calculate your max loss before putting in that order, and then position size accordingly. You want to visualize yourself booking the loss, so it’s not a total shock when you actually do.

Another important lesson, that I can’t even believe I need to say, is that HODL is not a strategy. It’s just a meme! Like the kind to make people laugh.

You see, people on the youtube or those crazy laser eye folks, will tell you that you need to HODL and you need to BTFD and all sorts of silly things that are obviously a joke, but I guess not to them apparently.

These laser loonies are the joke.

But that doesn’t mean you need to join them. You can just be one of us who laughs that sort of thing off. Like the joke it was intended to be….

Just wait, after you’ve been doing this a while you’ll notice those types of people eventually go away. They get burned out and move on to something else. Some just disappear forever.

Go ask those silver surfers who got carted off on stretchers a little over a decade back. There are many of those who we’ve never heard from again. There will be people with lasers in their eyes or “growth investor” in their profiles who will disappear too.

I’ve seen it too many times to count.

I used to feel bad for them. I really did. But I moved on and stopped feeling any sympathy years ago. And I’m glad I did. It’s not worth it. They won’t listen anyway.

So to be clear, what’s the solution here?

What is the “Prescriptive Model”, if you will?

The answer is to have a plan. Know where you’re out before you even get in.

Remember, if you get stopped out, you can always reenter into the position. There’s nothing stopping you.

If you’re an individual investor, you have a tremendous advantage over larger institutions. They can’t be as nimble. They have to stick to their mandates. The need to accumulate and distribute whenever there’s liquidity, not whenever they want like an individual can.

If you’re an individual investor, you can do anything you want. You can sell your stock or ETF or Crypto seconds after you buy it. And then you can get back in seconds later. And sell it again. And then get in once more.

I’m not saying to over trade. I don’t mean literally get in and out multiple times a day. All I’m reminding you about is your ability to do so.

Larger, professional investors don’t have that freedom. I know because I speak to them daily.

Consider yourself lucky. Remember that you have an unfair advantage over the biggest, richest and most powerful investors in the world.

Not everything is a loser.

Remember, the world doesn’t care that some investors have mental issues and are obsessed with US Growth Stocks.

It’s not the rest of the world’s fault that some Americans can’t overcome their home country bias.

No one else around the world cares that you ignored all the other countries that exist on this planet.

It’s no one else’s fault that you forgot that there are 3 asset classes, that include Commodities, not just stocks and bonds.

The rotation is real. 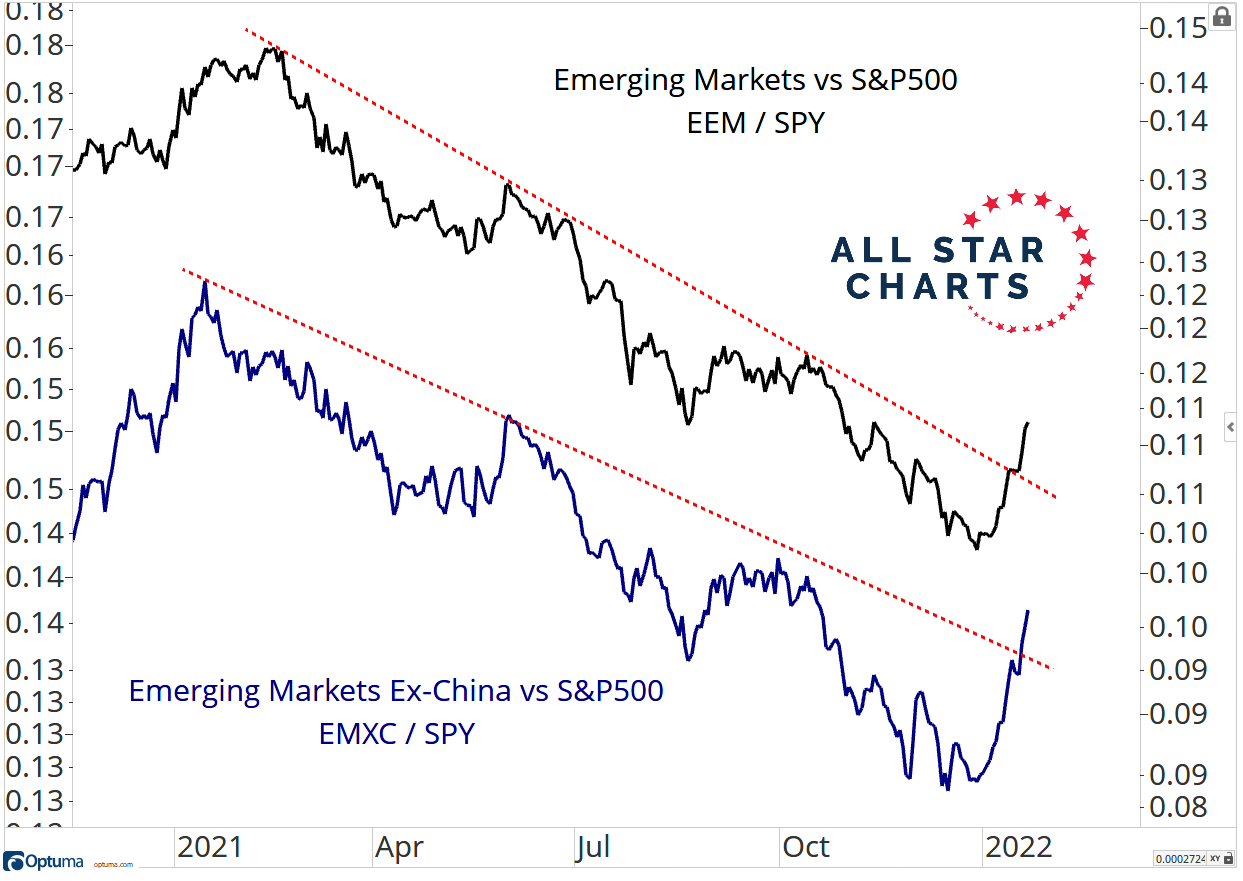 We haven’t seen this kind of outperformance from EM in quite some time.

And look at Crude Oil going out at new 7-year highs this week: 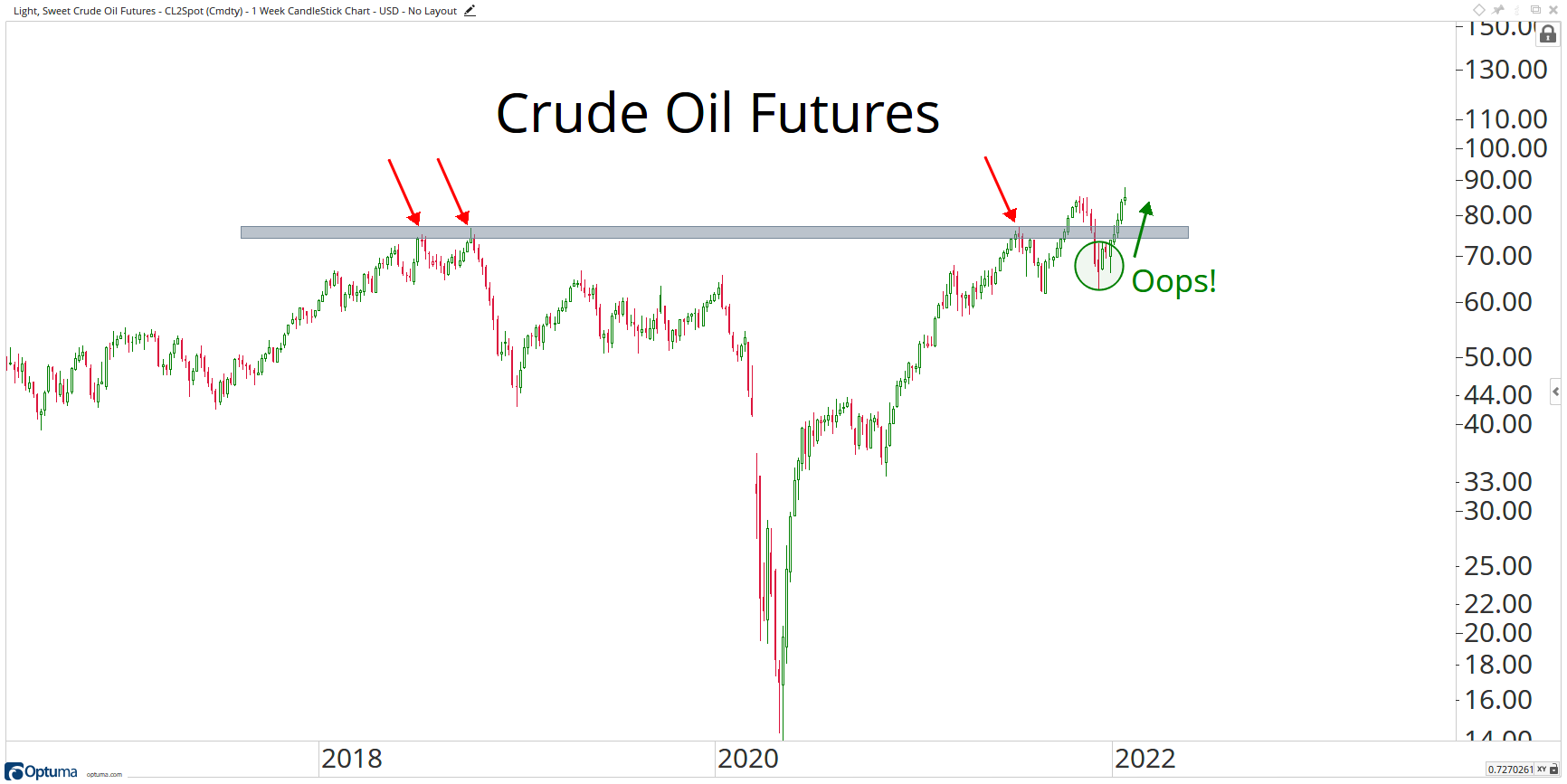 From a risk management standpoint, what would the market need to do to point to much more damage on the horizon?

I think this dual-pane chart might be the most important chart for any investor who lives on this planet.

The 2018 highs were a key pivot point for risk assets. If we lose that, then it’s really really hard to make any bullish arguments: 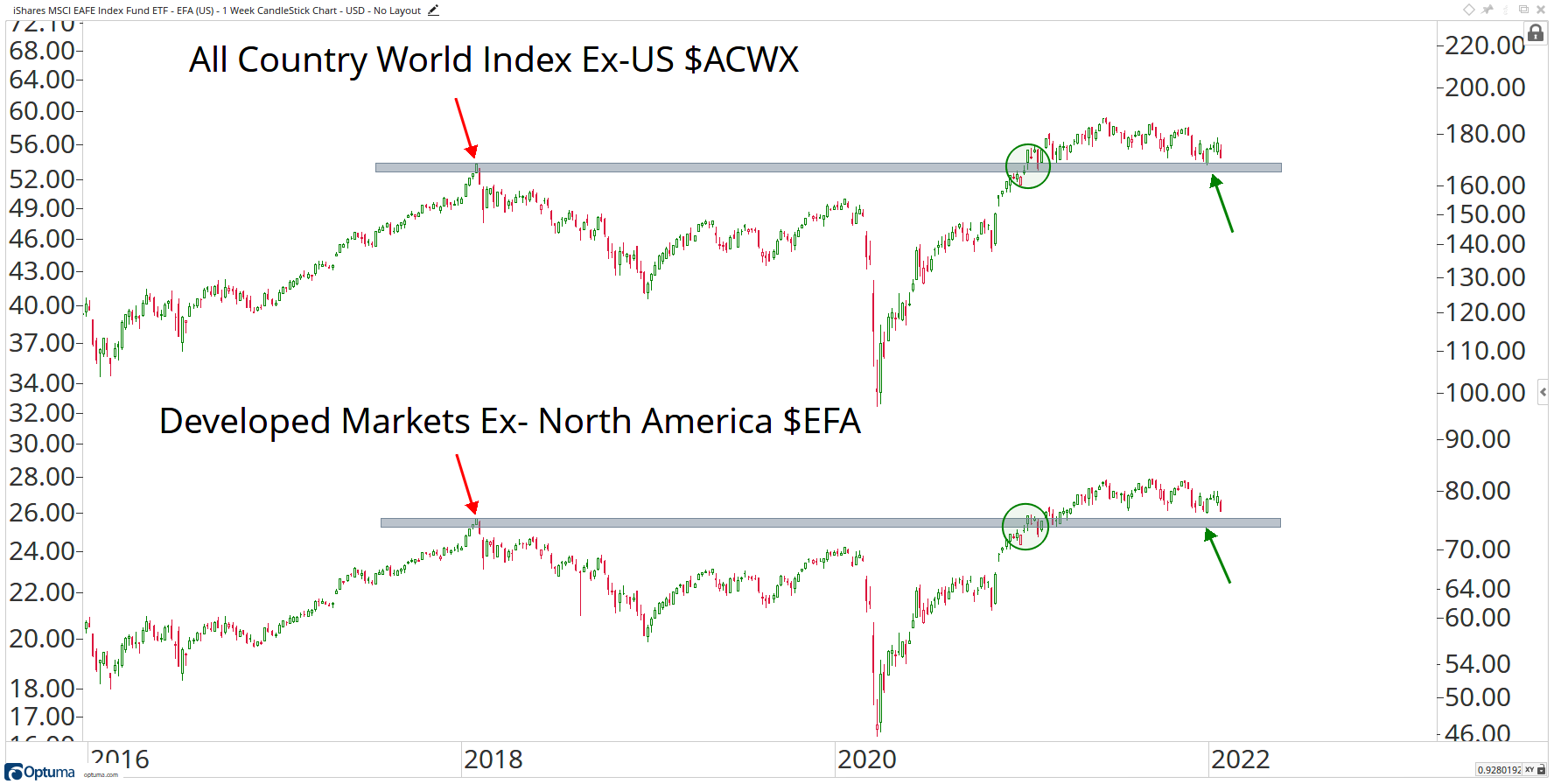 I’d say the rates and oil dual-pane chart is a close 2nd. Maybe even tied for first.

But this is what we’re watching.

I think it’s going to give us a lot of information moving forward.

What Are We Doing About It?

Make sure you’re caught up.

We’re taking a look at the largest companies in the world outside the United States. But we’re specifically looking for positive momentum and relative strength.

Commodities were the best performing asset in 2021 and so far in 2022 we’re seeing the same thing. There are plenty of ways to take advantage of these trends, in both the stock market and outside of stocks. Something for everyone here.

Our trade ideas page is always updated with the latest and greatest idea flow. If you’re looking for a regular stream of favorable risk vs reward propositions, this is the page for you!

We love to hear from you.

Even if it’s just to say what’s up.