Alright let’s keep it real. I’ve been cautious on US Equities since late February and they’ve relentlessly kept rocking to all-time highs without caring what I think. The monster breakdowns in Copper, Emerging Markets and Europe with the continued bid in Treasuries and US Dollars and a simultaneous rotation into defensive stock sectors have kept me from being leveraged long US Equities. It has not been fun.

So sure anything we short in Europe or emerging markets has worked great. Some non-correlated stuff has worked and some hasn’t. Fine. But we haven’t been seriously short US Stocks because price hasn’t given us a reason to. Occasionally we’ve taken a stab on some things but nothing that could have a big impact on the bottom line. The conviction on the long side just hasn’t been there, and price hasn’t said short the hell out of everything. When you’re not sure, get smaller right? But now the question becomes, where does price say to short everything?

To me there are 2 important charts that I am following very closely. The Yen and S&Ps. And they both look exactly the same. We broke out to new highs at the beginning of March, bearish divergences in momentum continue to develop and now those new highs need to hold. Or else.

Here is $USDJPY with the 94s as my big level: 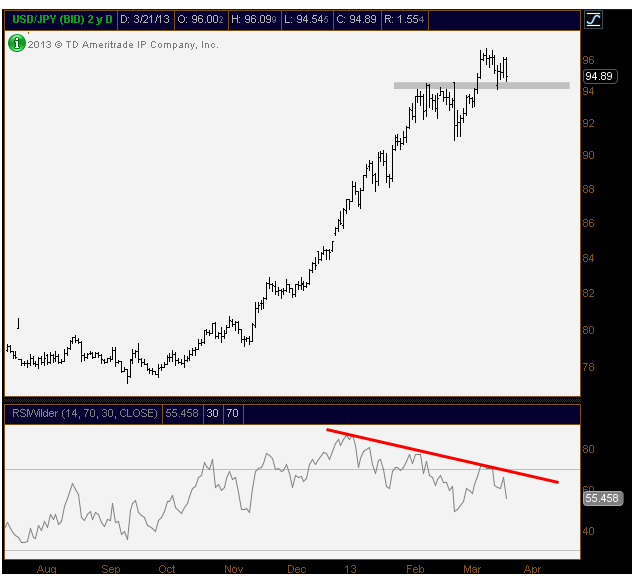 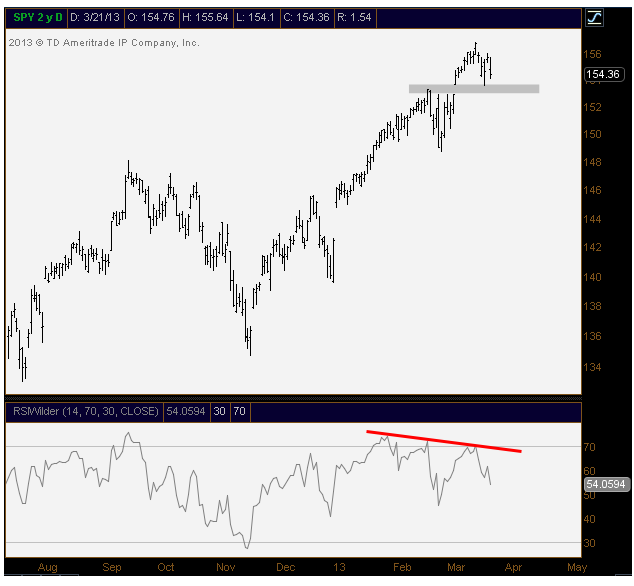 In my eyes, those are the lines in the sand. As I pointed to here, the Yen has the highest negative correlation to US Stocks out there right now. They should both do the same thing. I think future shorts can be initiated as long as we’re below the above mentioned levels. If we hold (which I’m not counting on), then the market is still fine.

These are serious lines in the sand that we cannot and will not ignore. I’ll do my best to write a follow up post if and when they break. At that point we’ll see if anything has changed and we can also discuss some potential support levels. But that’s a conversation for another day. Watch these levels guys…