Last week’s Mystery Chart was the Uranium ETF $URA zoomed all the way out to its inception and inverted.

I really hate to do that to you guys, but someone actually guessed it!

More importantly, though, most of you were selling the chart… so buying the Uranium ETF. Yes, you heard that right… buying Uranium.

In this post, we analyze a handful of other rarely covered and lesser-known risk-assets – but first, let’s look at Uranium.

Investors have wanted nothing to do with this heavy metal most commonly used to generate nuclear power for a decade now.

This is illustrated well by the long-term structural downtrend in the ETF. See what we mean…

Prices have been steadily trending lower since the ETFs inception in 2010. Although, a change in character may be taking place as it finally managed to register a series of higher highs this year.

So, while this multi-year consolidation looks like it may be building out a structural bear-bull trend reversal, especially considering its recent upside momentum (note the record overbought RSI reading, circled green), it still has more work to do before we want to be involved on the long side.

We’re looking out for more higher highs and higher lows, for the long-term moving average to curl up, and ultimately for price to take out its 2016/2018 highs near $16.

For now, we’ll just take it as information. Investors are buying Uranium, and that’s typically something that doesn’t occur in risk-off environments.

And here’s a look at Uranium futures.

Not the best of late, but also has the look of a potential long-term rounding bottom reversal pattern. Buyers have pumped price back above a key support/resistance level around 30 which is currently being tested. Uranium bulls definitely want to see this level hold.

The more important point is that there are plenty of small, under-covered corners of the market where investors seeking extreme risk tend to participate. Uranium is definitely one of them. If you think gold and silver bugs, and crypto-currency fanatics are something else – as BTO would say, you ain’t seen nothing yet.

Before moving on, let’s summarize some key themes we’ve been discussing lately…

For this post, we wanted to do something a little different, so we scoured our chartbooks for some of the rarest and most niche areas we cover in search of some extra unique risk-assets which like Uranium, are also showing strength in the short to intermediate-term.

Here’s the Dow Jones Non-Ferrous Metals index, which tracks 14 stocks that primarily deal with metals including aluminum, copper, lead, zinc, and tin. Well, it’s breaking out a monster multi-year base to the upside… 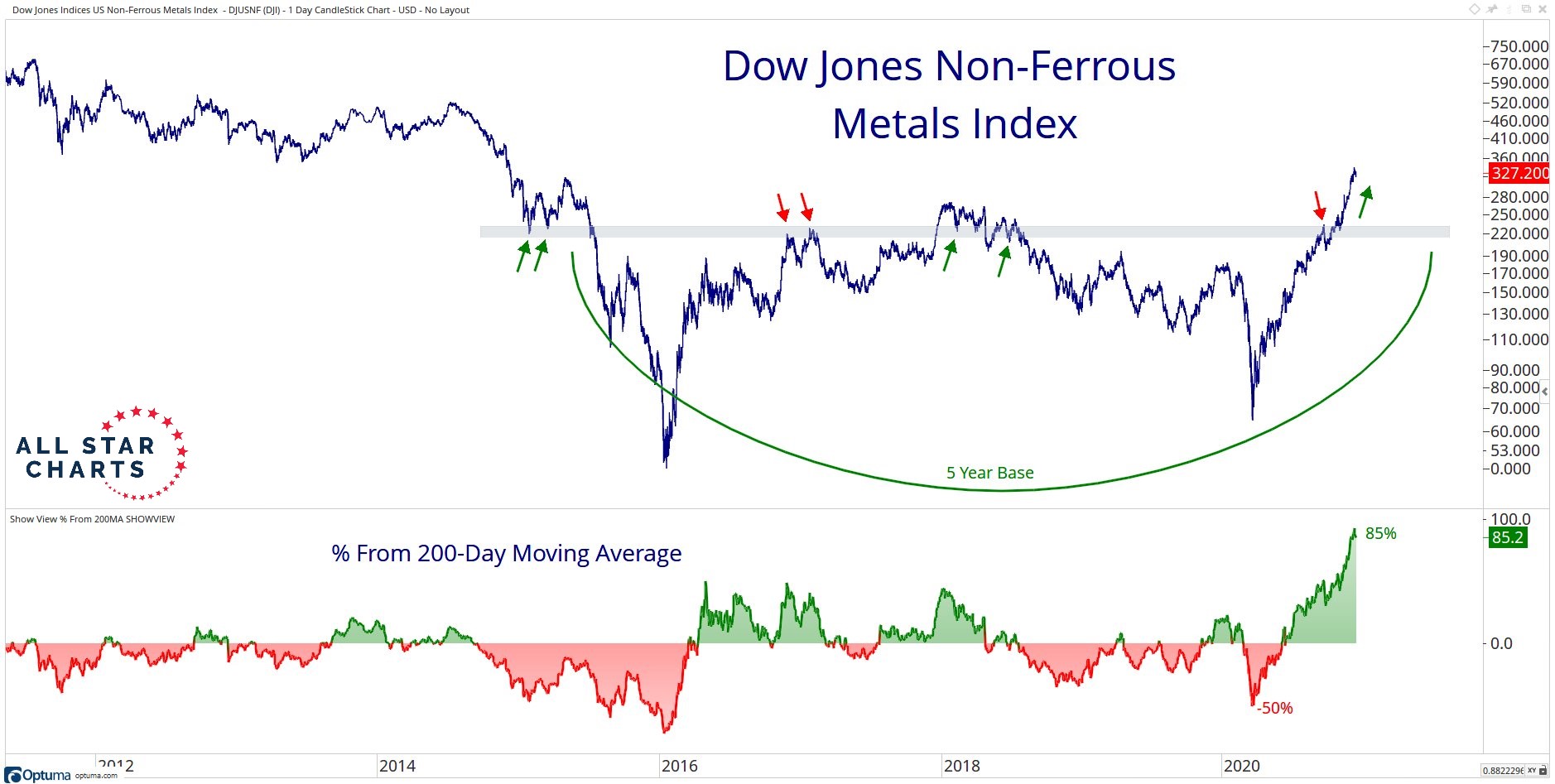 Note the historical price/momentum thrust, with the index currently trading 85% above its 200-day moving average. This is evidence of extreme and aggressive demand.

Given that non-ferrous metals are a direct function of economic and industrial activity, seeing this index resolve higher jives with the healthy rotation we continue to see.

Coal has also gained 40% from the beginning of November and almost doubled off its March lows.

Again, Coal is definitely not something investors look to when they are seeking safety. They buy it when they are looking to take on excess risk.

This behavior is showing up across the board for base metals. Iron Ore looks even better as it just made 7-year highs!

JC just wrote a post about it which you can read here. Here’s the chart. 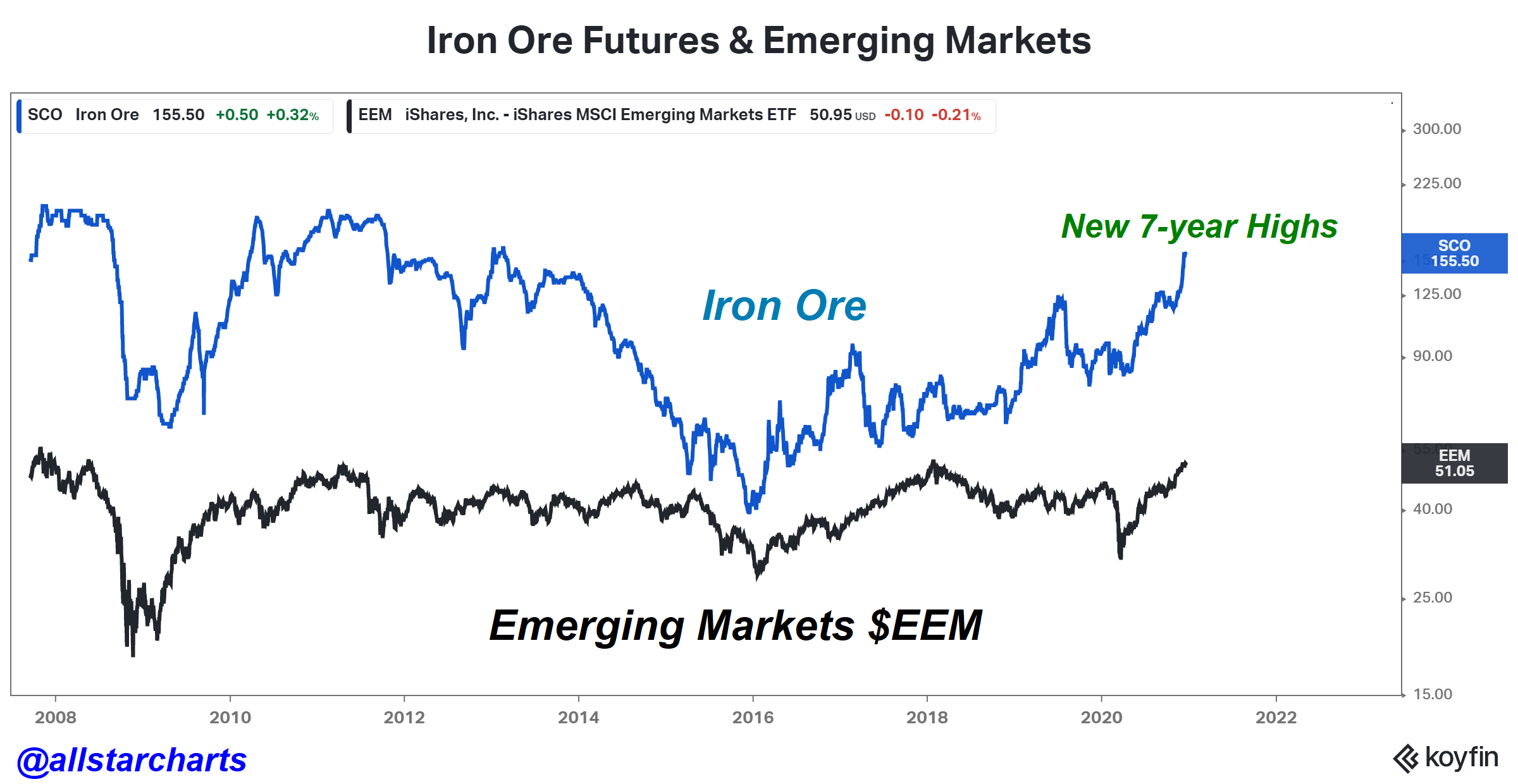 Will Emerging Markets follow? We think it’s only a matter of time.

Remember our post on Lithium from a few months back? We covered plenty of cyclical base-metals and ETFs which are considered to be economically sensitive and thus, risk-on assets. And guess what… most of them have continued to stair-step higher in the time since.

Here’s the Rare Earth Metals ETF $REMX, which just registered its highest momentum reading in history based on the monthly (21-day) rate of change.

While some corrective action in the near-term would make sense, this is still a very healthy development longer-term. This is yet another characteristic of a structural trend reversal.

There’s always a bull market somewhere, even if you have to venture into areas like Canadian Rapeseed Canola futures.

Though it’s a small and rather illiquid market, the reality is at major peaks and bottoms it has a heightened correlation with equities. And when prices are racing higher, as they have been, stocks are unlikely to be under stress.

Moving into currency land, and the BRICS currencies are finally progressing higher. Considering the monster downtrend in these currencies, any time they’re rallying, especially with the momentum they’ve been exhibiting of late, is an important development that deserves our attention.

And from a correlation perspective, when these currencies are trending higher, it acts as a major tailwind for Local Emerging Market bonds relative to the US Bond Market.

This expansion of risk appetite we’re seeing isn’t just isolated to commodities, or currencies, but rather every major asset class in the World.

Buyers have pushed prices firmly above key former resistance at their 2018 lows. Demand has finally absorbed all that overhead supply, indicating that the Rand may also be in the early stages of a long-term trend reversal.

While this a logical area for some corrective action, it’s always more bullish to see important levels reclaimed beforehand and then the subsequent consolidations taking place above them.

In this reflationary environment, we think the risk is to the upside in these BRICS currencies.

And how could we forget the Crypto market!?

We’re seeing new breakouts in not only Bitcoin but also the altcoins. These less popular Cryptocurrencies carry an elevated level of volatility. For this reason, these markets are more or less dominated by extreme risk-takers. 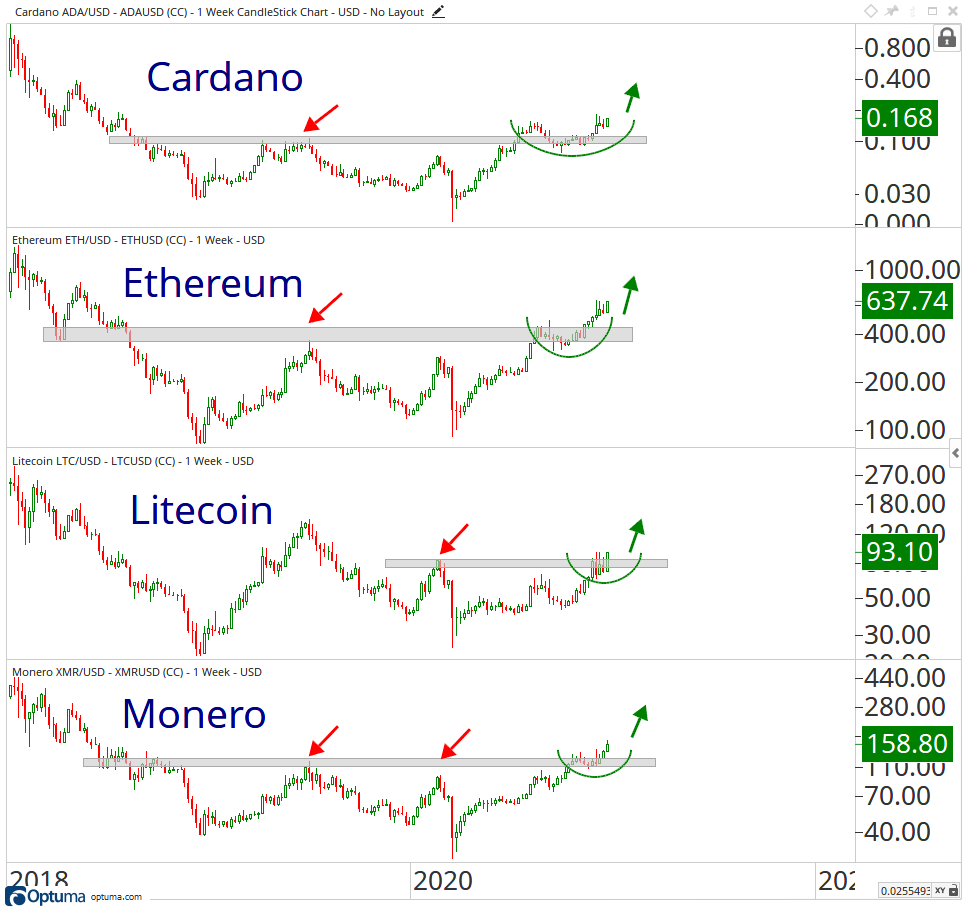 It’s important to recognize that the market cap of the entire Cryptocurrency complex is only approximately the size of Facebook $FB, so it’s hard to call it an asset class at this point. With that said, these coins are becoming increasingly correlated to risk assets, so it’s worth including in this discussion.

The bottom line is that these risk assets would not be performing the way they have been if markets were under increasing stress and investors were increasingly cautious and raising cash. As extended as these recent moves appear, historical momentum thrusts occur at the beginning of new secular trends.

We’re in the camp that many of these risk assets are building the foundation for meaningful bearish-to-bullish trend reversals.

Even buyers of the riskiest and most obscure assets in the World are being rewarded. This is an incredibly positive development.