From the desk of Steve Strazza @sstrazza

Looking at the past helps put the future into context. In this post, we review the absolute and relative trends at play and preview some of the things we’re watching to profit in the weeks and months ahead.

While the same themes we’ve laid out in previous reports continue to hold strong, we have seen some recent deterioration, particularly in the large-cap sectors and indexes.

Despite an increase in bearish developments, the overall weight of the evidence is still firmly in the bull camp, and we remain aggressive buyers of stocks and risk assets, particularly over any longer-term timeframe.

It is also very important to consider the recent volatility within the context of the primary trend… which is still unequivocally higher in EVERY major US Index.

Over the upcoming weeks, our view is that many of the recent leaders are likely to consolidate at logical resistance levels. So expect some chop. Be ready for whipsaws, and plan your trades accordingly to avoid being shaken out. Position size accordingly and exercise caution.

BUT! Most importantly, be prepared and watch the market closely as this could turn into something more serious, in which case we want to be sure to respect our risk levels and get out if and when they are violated. We put a lot of thought into making sure we always know when and where we are wrong and providing these levels to clients.

We can’t press the “sell” button for ya though… You have to be disciplined enough to do it yourself when the time comes.

What we can do is lay those levels out clearly for you, and reiterate the importance of following them religiously. No ifs, ands, or buts – if we’re below our level OR achieve our target, we’re out! We can always reevaluate things later.

Along the lines of respecting our risk levels, unless stress starts spilling into more and more areas of the market and we see more assets lose their key levels, there is currently little cause for concern as there has yet to be any real structural damage to equity markets or any risk-on areas, for that matter.

Long story short, while these recent developments definitely have our attention, our bullish macro thesis and positioning haven’t changed a bit.

With that said, let’s jump right into the US Index table.

Small $IWM and Micro-Caps $IWC were hit the hardest last week, as these two indexes, along with Mid-Caps $MDY failed to reclaim their February highs. Considering these smaller stocks have been the unequivocal leaders for some time, this a development we’re closely monitoring to evaluate the damage of this recent bout of volatility.

As we said last week;

Right now all three are sending clear warning signs as they just failed miserably to defend their February highs. This isn’t a good look for stocks.

But given that these indexes were able to defend their February pivot lows is encouraging and suggests that this selling pressure is more consistent with some ordinary churn and digestion rather than a sustained distribution period. 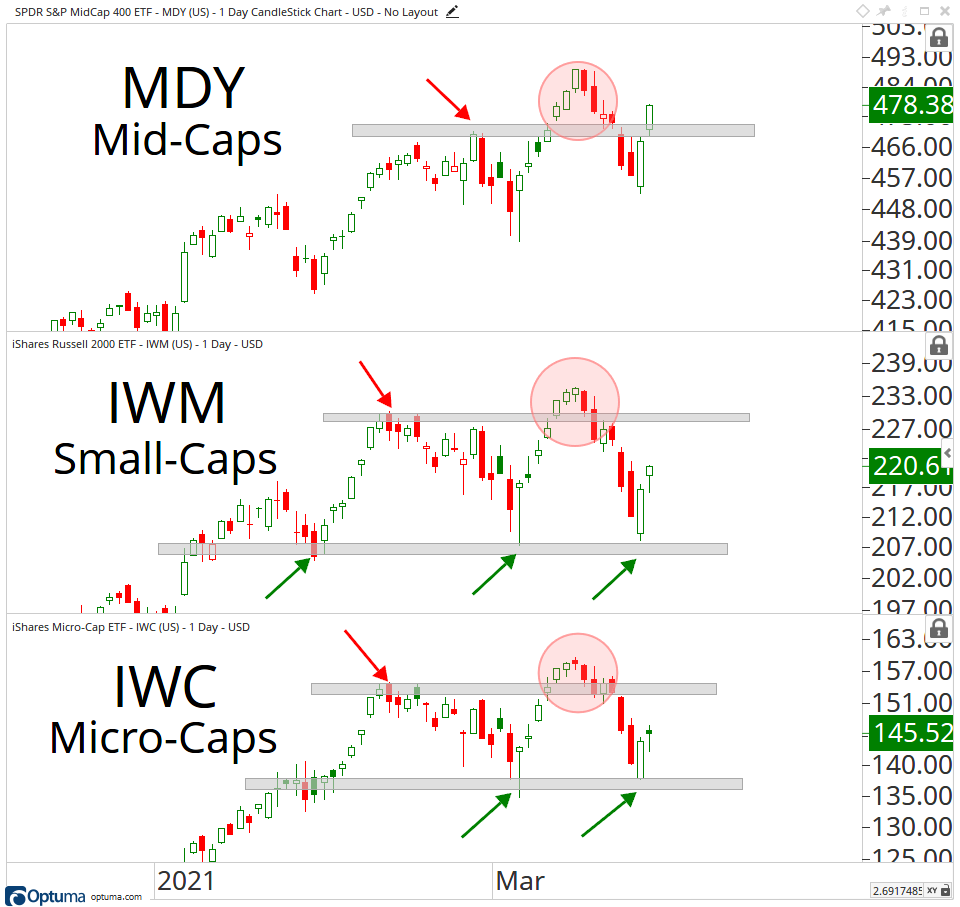 In an ideal world for risk assets, all three of these indexes would reclaim their February highs. Mid-Caps already have… will the others follow?

Moving away from SMIDs, the S&P 500 $SPY as well as the Dow Industrials $DJI and Transports $DJT all closed the week at new all-time highs.

Here’s what we said the last time we discussed the charts of these large-cap indexes in an RPP Report at the beginning of March:

It’s not so much that money is flowing out of stocks. Instead, we’re seeing capital shift between different stocks and sectors. This is illustrated by the strength in Financials, Energy, and pretty much any index or sector with heavy cyclical exposure.

The recent disparity among the indexes is simply an effect of the rotation that is taking place. Unless we start seeing breakdowns on an absolute basis, this is perfectly healthy and shouldn’t be a cause for concern.

Notice which index is NOT at new highs… Let’s discuss this quickly.

Despite how much we’ve leaned on the Nasdaq 100 for information on the health of the overall market in recent years it is important to point out that the Nasdaq is not at all representative of “the stock market”. Why do we say this? It’s simple, really… With ZERO exposure to Financials, Energy, and Materials, the Nasdaq is really just a growth index as it has a 90% allocation to the three traditional growth sectors.

Here is the Nasdaq 100 sector breakdown: 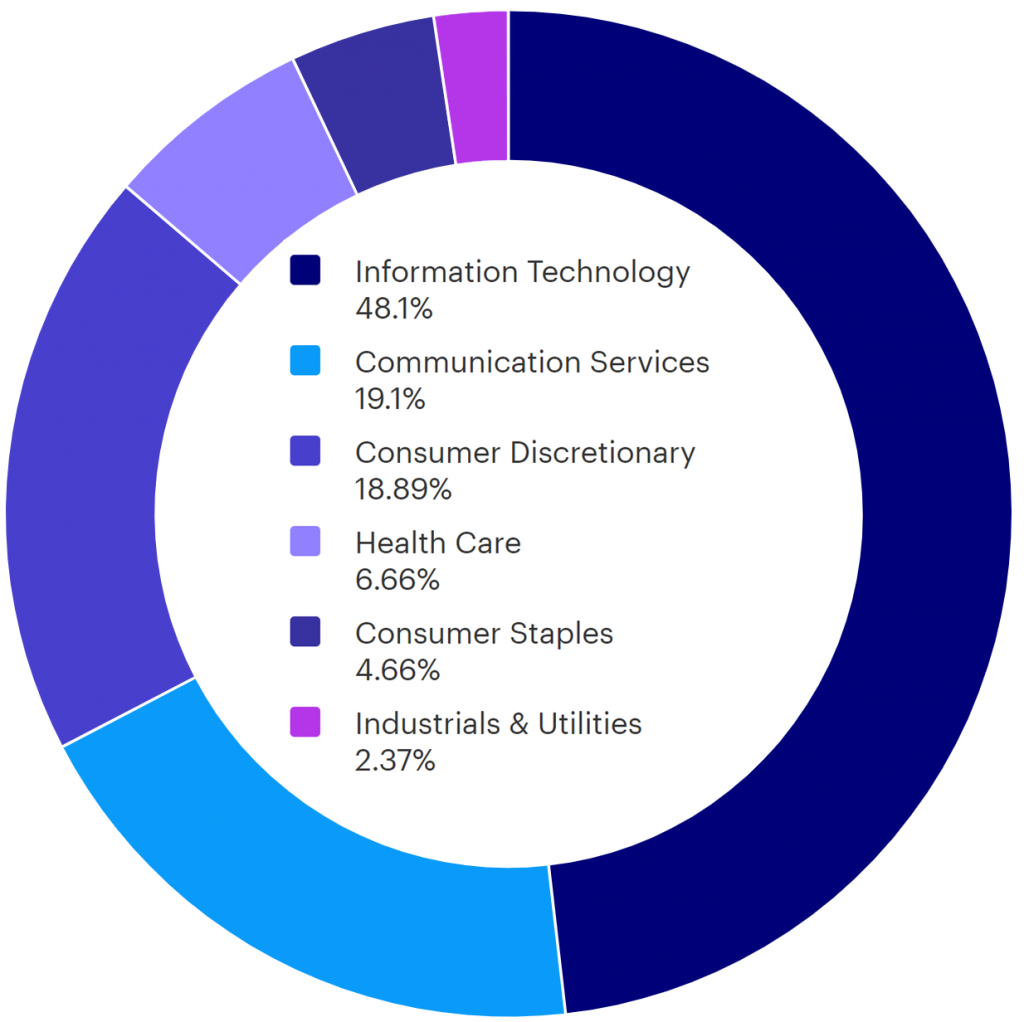 The environment is only becoming more and more challenging for traditional passive index investors.

Look at the action from these cyclical sectors last week. It sure looks like they’re gearing up for another leg higher. 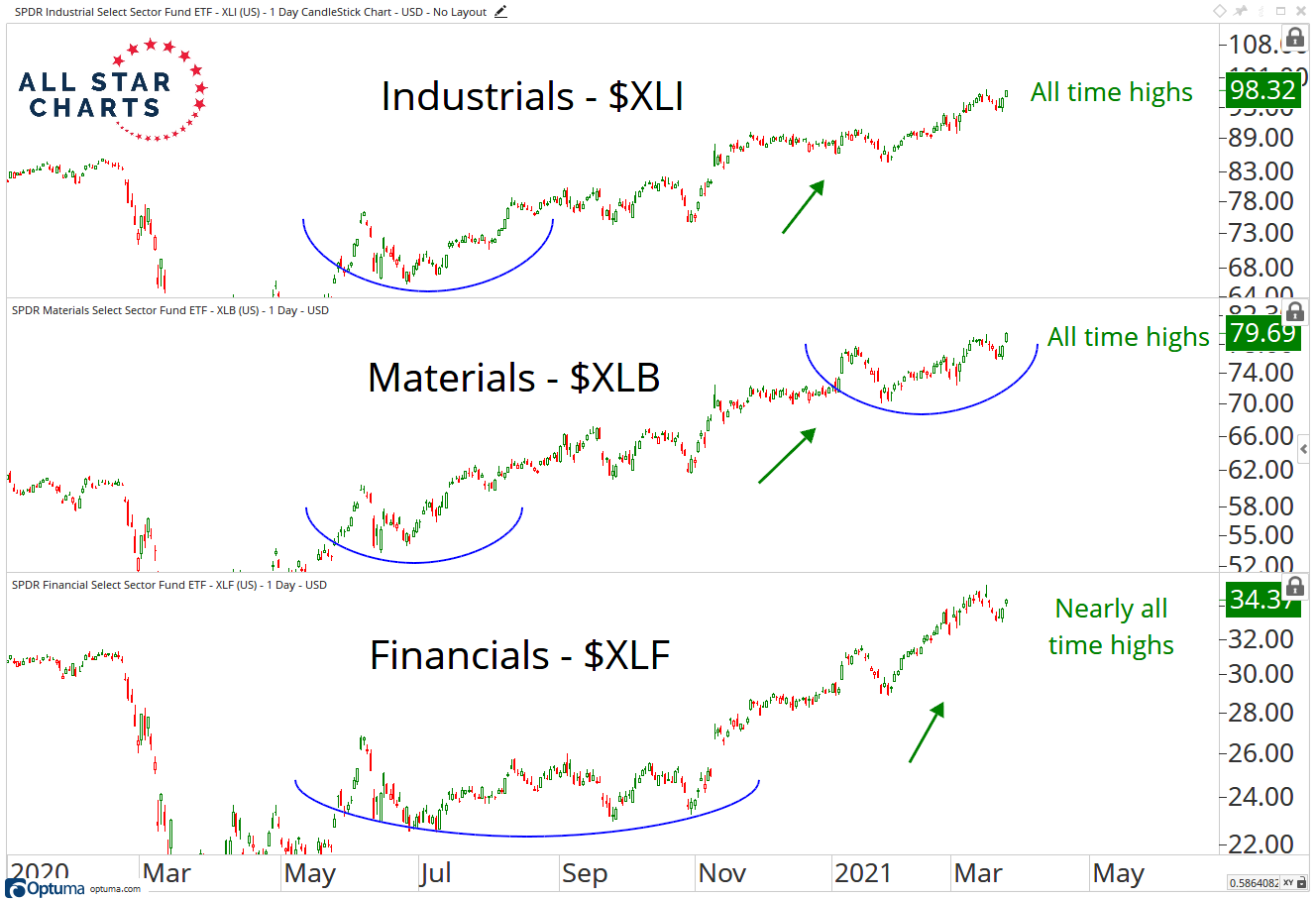 XLI and XLB closed the week at their highest levels in history and XLF isn’t far behind.

Consumer Staples $XLP is also at new absolute highs. And while it’s not easy to see in the chart below, it’s also at multi-month highs relative to the S&P.

Read more about it here and look out for this week’s “Bullish or Bearish” episode where JC shares his thoughts on this development.

In a sense, these two datapoints juxtapose each other. We’re seeing cyclical, risk-on groups show relative leadership, but at the same time risk-off, bond-proxy sectors like Staples, Utilities, and Real Estate have been outperforming in the very near-term…It’s unlikely that both of these developments will occur simultaneously for much longer than they already have.

We’re looking at a custom index of these three sectors, equally-weighted – relative to the S&P 500.

It’s important to keep in mind that this minor uptick in these defensive sectors on a relative basis is exactly that: minor. There’s not enough evidence right now to suggest that this couple of weeks of bearish price behavior will spill into risk-on areas.

But it is still a notable development and we want to pay close attention… due to the very strong negative correlation (lower pane) that the relative trends of these safety sectors have with the overall market, if this turns into a sustained reversal it is very unlikely that stocks will be trending higher in that environment. In fact, we’d expect them to fall, just as they have time and time again when Staples have exhibited relative strength throughout history.

Let’s continue on this discussion in our Industry ETF section.