I want to elaborate on a big theme of late that’s been on my mind. We’ve written about it, discussed it internally – as well as on Clubhouse, and just this morning JC and Willie were both tweeting about it.

One major implication of the impending trend reversal in growth vs value is its potential effect on passive investment vehicles.

Considering what a mega-trend passive investing has become with the ETF boom over the past decade-plus, this is likely to impact investors far and wide… If they don’t reposition themselves appropriately.

The reason for this is nuanced but in my opinion, it boils down to the argument that passive is really just active and there have been significant changes in market structure since the financial crisis that have resulted in the major averages being dominated by just a small handful of stocks.

In this post, we’ll take a look at what these stocks are doing and what this price action could mean for the passive investing community.

Let’s start with a brief history…

It’s been all US, Large-Cap, Tech, and Growth for the better part of the past decade. Just look at these relentless uptrends.

Starting in September, we saw the leadership from these groups start to falter, and this trend has only become more pronounced in the time since.

Just look at what’s happened since February 1st of this year, which is when the rotation into Value really accelerated: 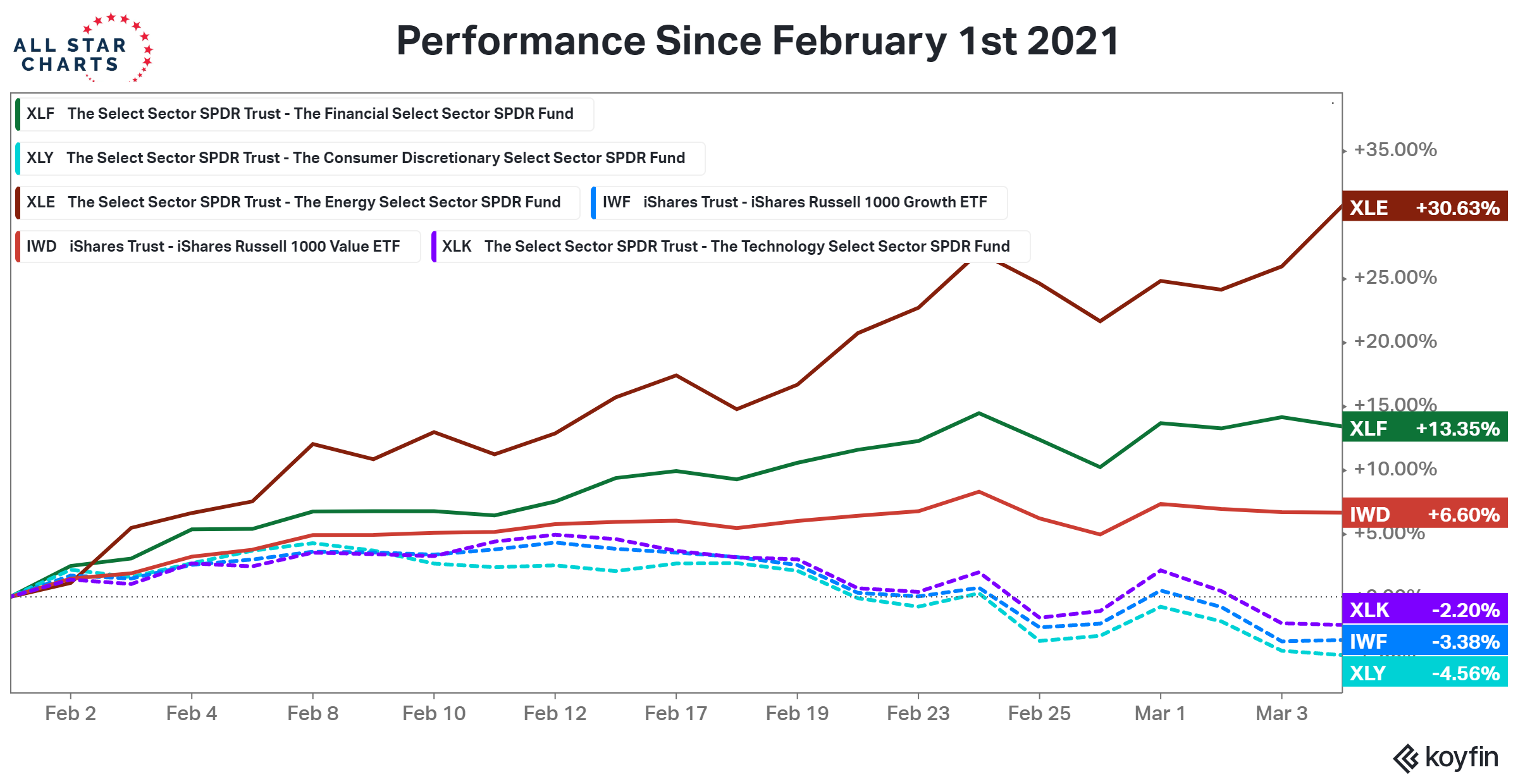 Value is up almost 7% while Growth is lower by more than -3%. That’s a 10% disparity! And the spread in performance between Tech and Financials is even wider at more than 15% over the same period.

You can see this development gradually taking place in the absolute charts of these two factors, as they’ve taken increasingly diverging paths over the past few months.

Growth appears to be completing a topping pattern while Value recently broke out of a short-term base to new highs. Remember, we like smiley faces, not frowns. See the difference?

This huge disparity in returns of late has resulted in the Growth vs Value ratio resolving a nearly 10-month topping formation to the downside as price just violated our level at 1.70.

I know you’re sick of this chart, but it’s important to point out the follow-through we’re seeing as price has accelerated lower since taking out those key former lows. The breakout definitely seems to be a valid one, as we’re also getting confirmation in the form of the first bearish momentum reading in years.

Making matters worse, the relationship has also endured some serious structural damage as its now back below its key dot-com bubble highs in the 1.65 range. Have a look.

We recently wrote about a similar Growth vs Value barometer, the Nasdaq 100 vs Dow Industrials ratio – which just failed at a similar level.

So, the next chart should be no surprise…

The Nasdaq 100 vs S&P 500 looks strikingly similar, with a potential major failed breakout at the key prior highs from over two decades ago.

All of these charts are telling the same story. If we’re below these key levels, it’s time to look for opportunities elsewhere as the Nasdaq and Growth are no longer leadership areas.

So, what’s driving the action in all these ratios? Much of it comes down to the fact that Tech stocks make up roughly 50% of both the iShares Large-Cap Growth ETF $IWF and Invesco’s Nasdaq 100 ETF $QQQ.

Not to mention, unlike the other major indexes and averages, the Nasdaq has zero weight in Financials (by definition). In fact, it’s really not diversified at all as 90% of the index is represented by just three sectors: Tech, Communications, and Discretionary.

This high exposure to Tech/Growth relative to Financials/Value is why it’s boasted such extreme outperformance over its peers like the Dow and S&P over the past several years. Although, it’s also why we’re now seeing evidence this is changing.

Now that the long-term relative trend is no longer in favor of Growth and Tech, what does it mean for all the passive vehicles that have so much exposure to these areas?

The following equal-weight basket of the 4 largest stocks in the US account for roughly one-third of the Growth and Nasdaq ETFs.

Price is rolling over and violating a 6-month channel as momentum wanes and diverges negatively. These former leaders are under pressure, which means QQQ and IWF are likely to be as well.

Here is the general of the bunch, Apple $AAPL.

Price is violating its multi-month uptrend line as I write this. Also notice how momentum just hit oversold for the first time in almost exactly one year. Long story short, this Apple looks like it’s about to fall from the tree.

Along with Microsoft $MSFT, these two stocks account for over 40% of another popular ETF, the Technology Sector SPDR $XLK.

Here’s Microsoft, which is also violating our risk level today as it breaks beneath the Fibonacci extension and key prior highs around 227.

As long as we’re below this level, MSFT is a no-touch.

Here’s Technology now, with a similar-looking chart pattern as its two largest components, above.

Notable weakness continues from the Tech sector as both momentum and relative strength have been diverging lower since last September.

125 is the line in the sand for XLK and price is hovering slightly above it for now. Whether or not we get a successful retest of this level or not will be excellent information. But as long as we’re below those former highs, we can’t own Tech.

Another two growth behemoths, Amazon and Tesla, account for almost 40% of another top-performing Sector SPDR, Consumer Discretionary $XLY. Here they are.

Both names are breaking lower as I write this. Tesla is testing its lowest levels since December while Amazon is making fresh 5-month lows. That kind of price action doesn’t exactly scream leadership. In fact, it’s quite the opposite.

And this is Consumer Discretionary, breaking down beneath our risk level as momentum deteriorates.

If we’re below 165 the near-term risk is to the downside in this old secular leader. Although, we’d rather just not own this than be short as the primary trend is still intact and we’re in an environment where we simply don’t want to be betting against stocks in general.

Instead, we want to be betting on different stocks than we have in the past.

The point I’m trying to make is this really doesn’t have to be complicated. These ETFs are dominated by such few holdings it can be as simple as asking the following…

“Do I want to own this if 35-40% of its weighting is in stocks that are breaking down?”

That old Wall Street adage, “it’s a market of stocks, not a stock market” could be the theme of the next few years.

So if you have to invest in “passive” vehicles, make sure they’re the right ones. If you got comfortable with the narrative of big-cap growth and tech, it’s time to get used to a new narrative of fossil fuels and traditional wall street banks.

This won’t be an easy thing for many to wrap their heads around or explain to clients, especially considering how well the trade has worked for so long… But that’s simply the message the market is sending us right now.

Remember, it’s not about doing what’s comfortable, it’s about making money – or at the very least, managing risk. And from my experience, oftentimes the best trades and investments are the least comfortable.

The bottom line is to always know what you own and make sure you own what’s working.

With the change in leadership becoming more pronounced, we’re repositioning ourselves into the vehicles that are showing strength and out of the ones that no longer are.

Let us know if you’re repositioning into these former laggards too!

Is it easy for you… Or, is it a bit uncomfortable? If it’s the latter, don’t worry… It’s not always supposed to be easy 😉