If there is one chart that stands out the most this year, it has to be the Growth vs Value relationship. We’ve been pounding the table about it for a reason.

We know what’s happened over the past couple of weeks. But when you zoom out and see just where it’s happening, that’s the WOW! 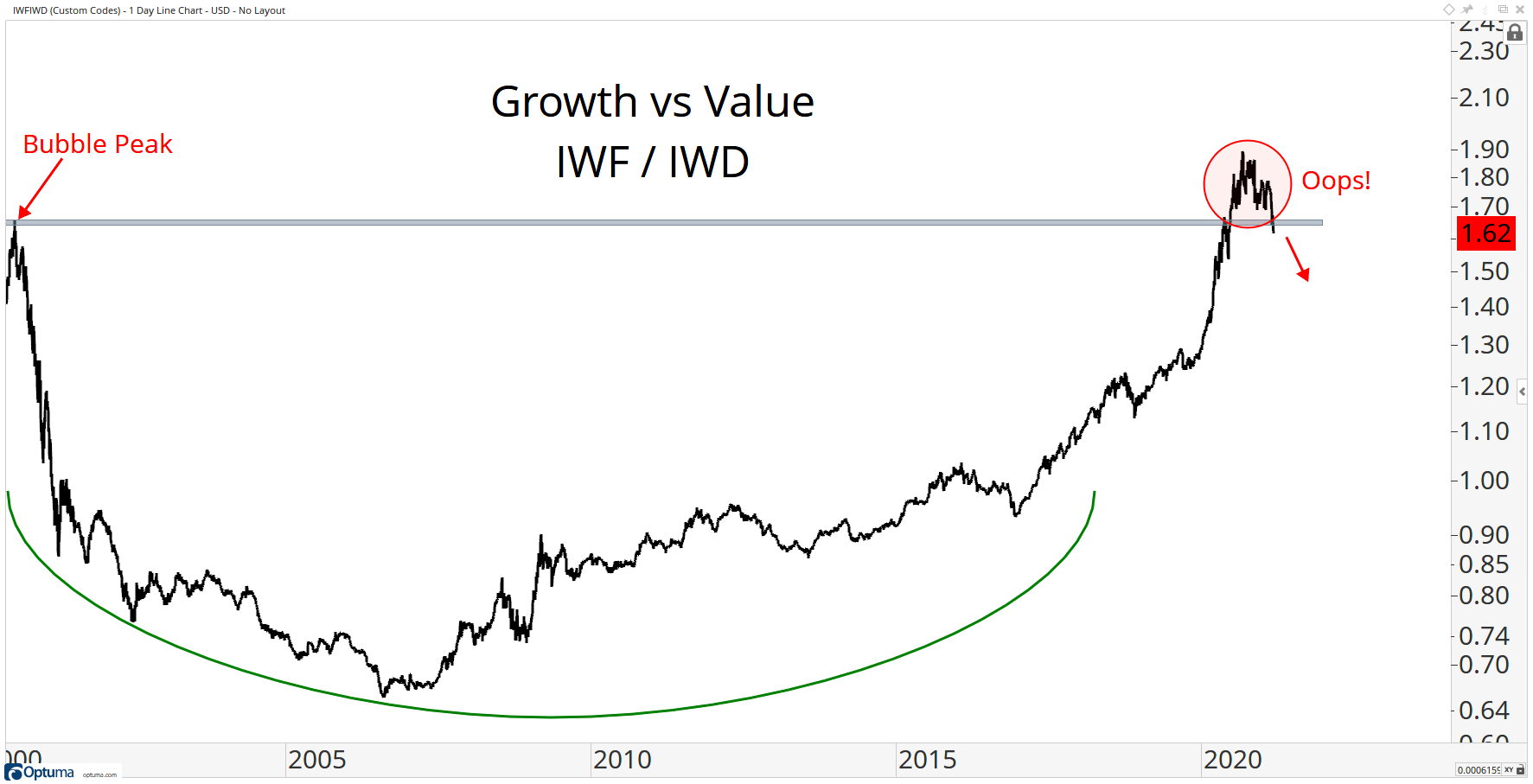 The setup for a potentially catastrophic whipsaw in Growth is definitely there.

And wouldn’t that make sense in an environment where we’re in the early stages of a commodity supercycle? Wouldn’t that fit perfectly within a world where International is outperforming the U.S.? Think about the components of most other countries around the world. They don’t have this much Tech. They’re loaded with Banks and Natural Resources. Value Stocks, in other words.

You have to laugh at the thought of trying to convince most people to invest in old dirty energy stocks. The short clean energy trade, and buying the grossest dirtiest energy in the world is working. And by all measures, it appears as though this trend is here to stay.

How hilarious is it that Energy and Value started working right after Exxon Mobil $XOM got kicked out of the Dow Jones Industrial Average and was replaced by Salesforce $CRM.

What about the delisting of the Coal ETF $KOL in Q4 last year.

Many people were pointing to last week’s capitulatory-type behavior in bonds and, in turn, the value/growth rotation. But the data this week has suggested that, in fact, it was not capitulatory at all.

The U.S. 10-yr Yield remains above 1.4%. That’s the level. We don’t want to own treasury bonds, and we want to be betting on Value’s continued dominance in that scenario.

And the problem for many passive investors is that they’ve gotten so used to U.S. Large-cap growth. Anything International or exposure to Value has been a mistake for so long. Don’t even talk to me about commodities, as most investors don’t have any exposure at all.

Energy as a sector can triple from here and it would hardly put a dent in the S&P500 or in many of the passive funds that are market-cap weighted.

Some investors figured it out early. Many investors won’t realize it until it’s way too late. They’ll see their portfolios flat or even down in a market where the indexes are up. But what’s worse, is that their over exposure to cap-weighted indexes keeps them leaning heavily towards large-cap growth, especially in the U.S.

This is NOT what we want to do in this environment. It’s the opposite.

We’ve gotten a lot of emails the past couple of weeks from investors and advisors who repositioned into International and Value. Kudos to them for acting.

How long will it take everyone else? I think a long time. I think a very, very long time.

Most people don’t see this coming.

And that leads me to believe that it’s got plenty of legs.

Check out our latest: Will FAANGs Pop The Bubble in Passive?