What do we know about all-time highs? They are not a characteristic of a downtrend. New all-time highs are things we see when we’re in a market environment where it is more advantageous to be buying stocks rather them selling them. This is what we have today, whether you like it or not.

Are these reasons to now all of a sudden start selling stocks? My argument is no. 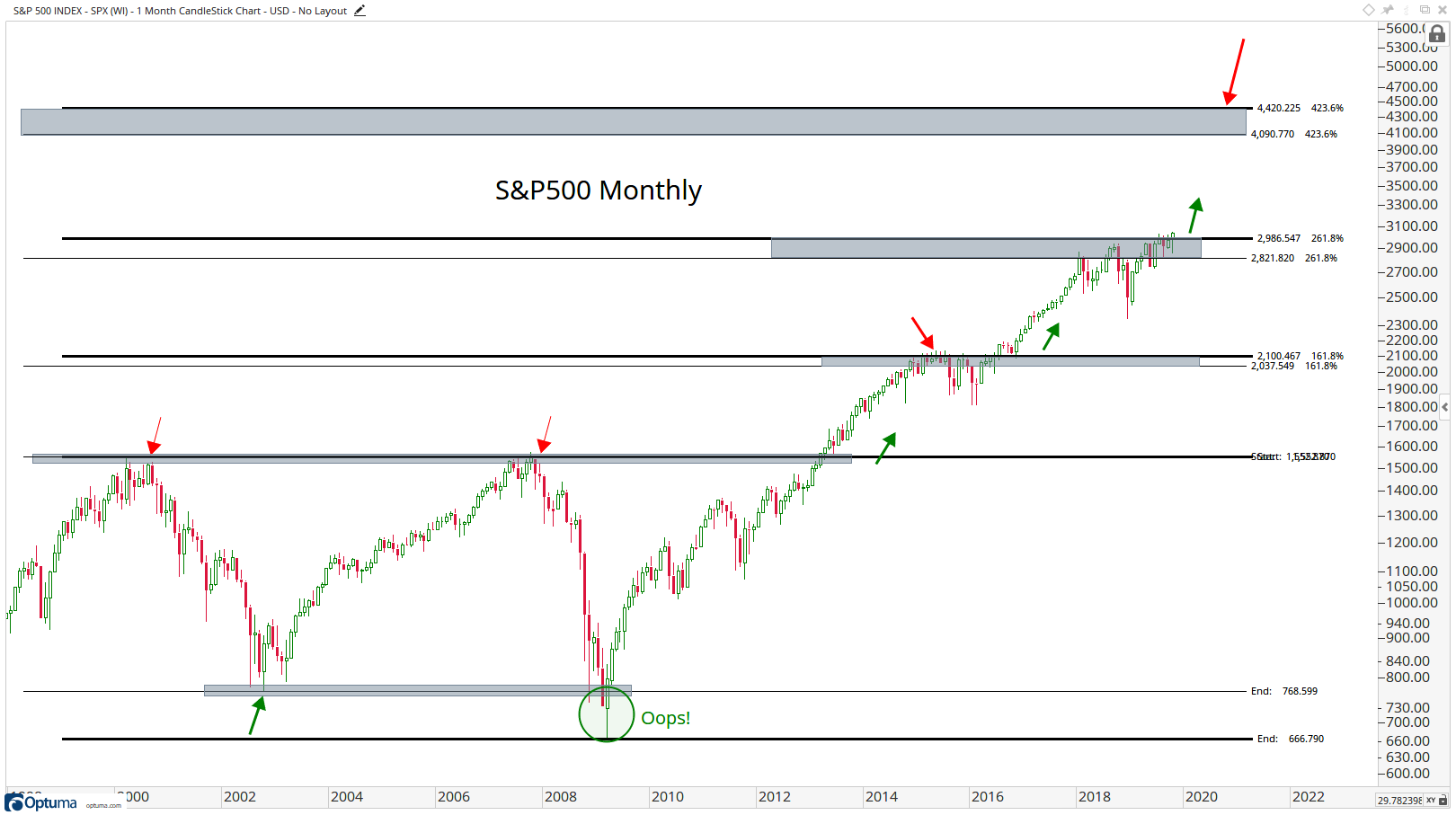 We’re seeing the exact same thing in the Dow Jones Industrial Average. This is the first time in the history of the Dow that we see a monthly close above 27,000. If we’re above those January 2018 highs, why on earth would we be shorting stocks? We have to be aggressive buyers: 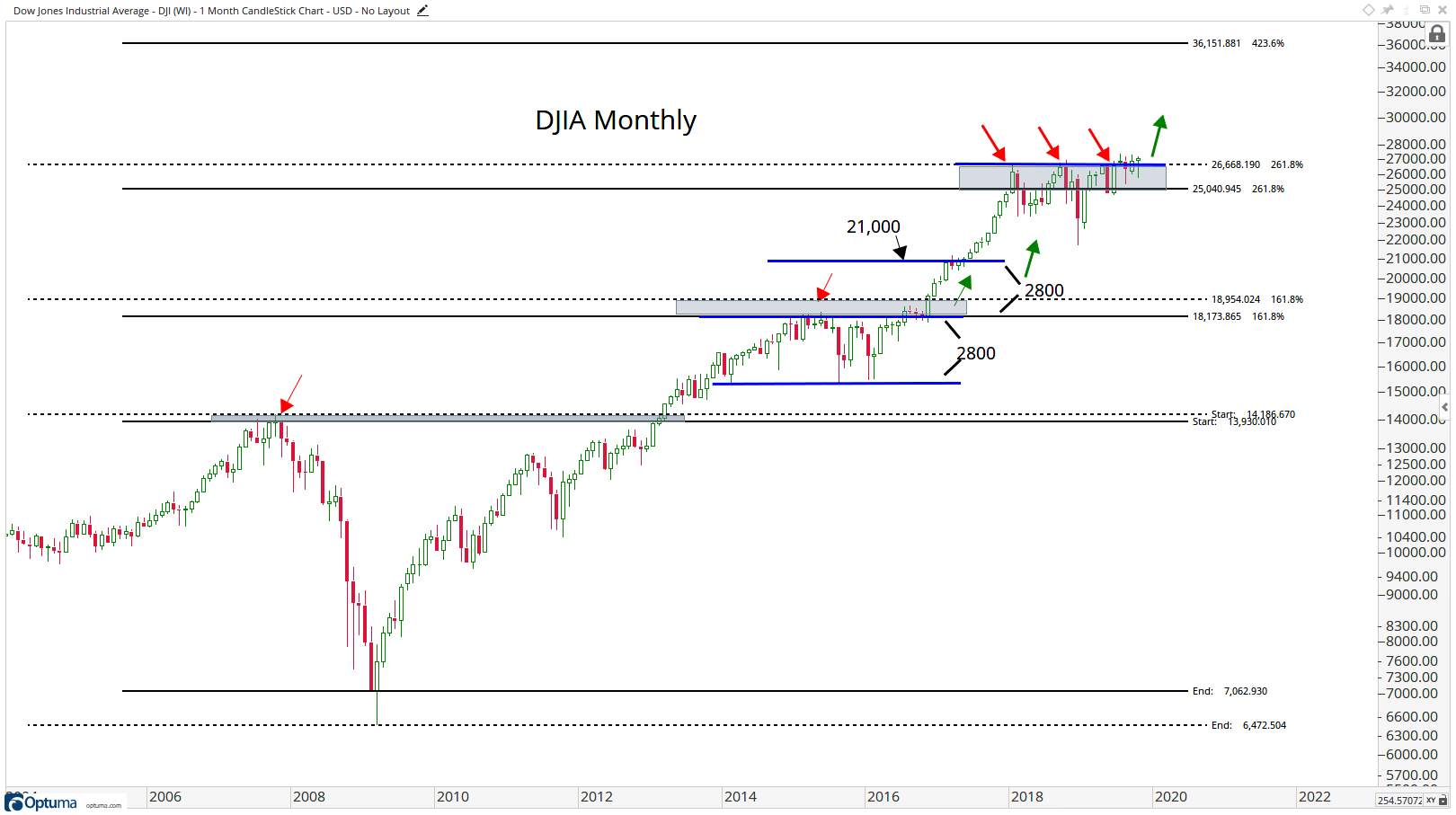 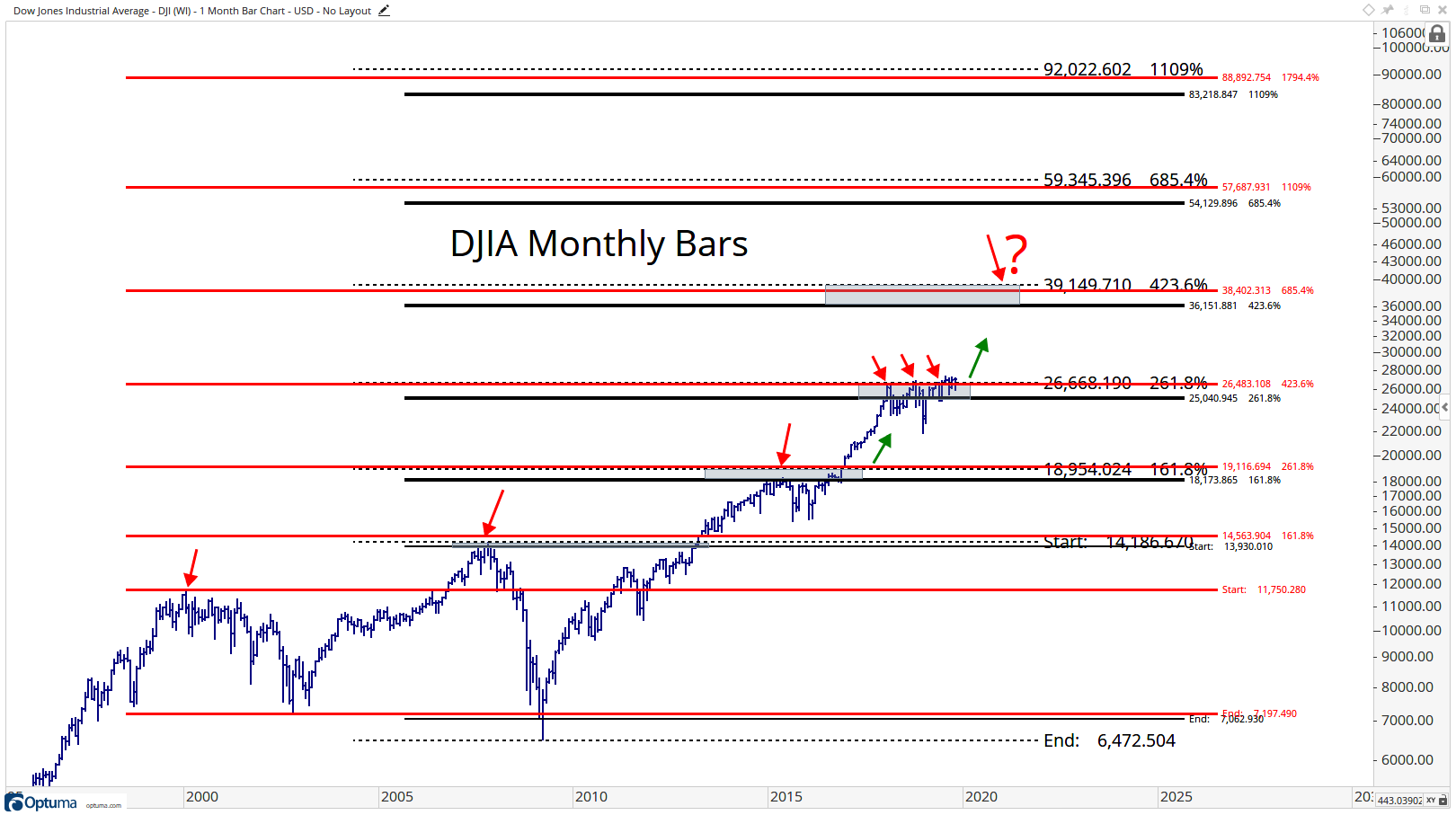 Now that the Dow Jones Industrial Average is making all-time highs, it’s only fair that the Dow Jones Transportation Average follows along. A breakout above 11,100 would most likely do that. We keep bumping up against it, and I think it’s coming very soon: 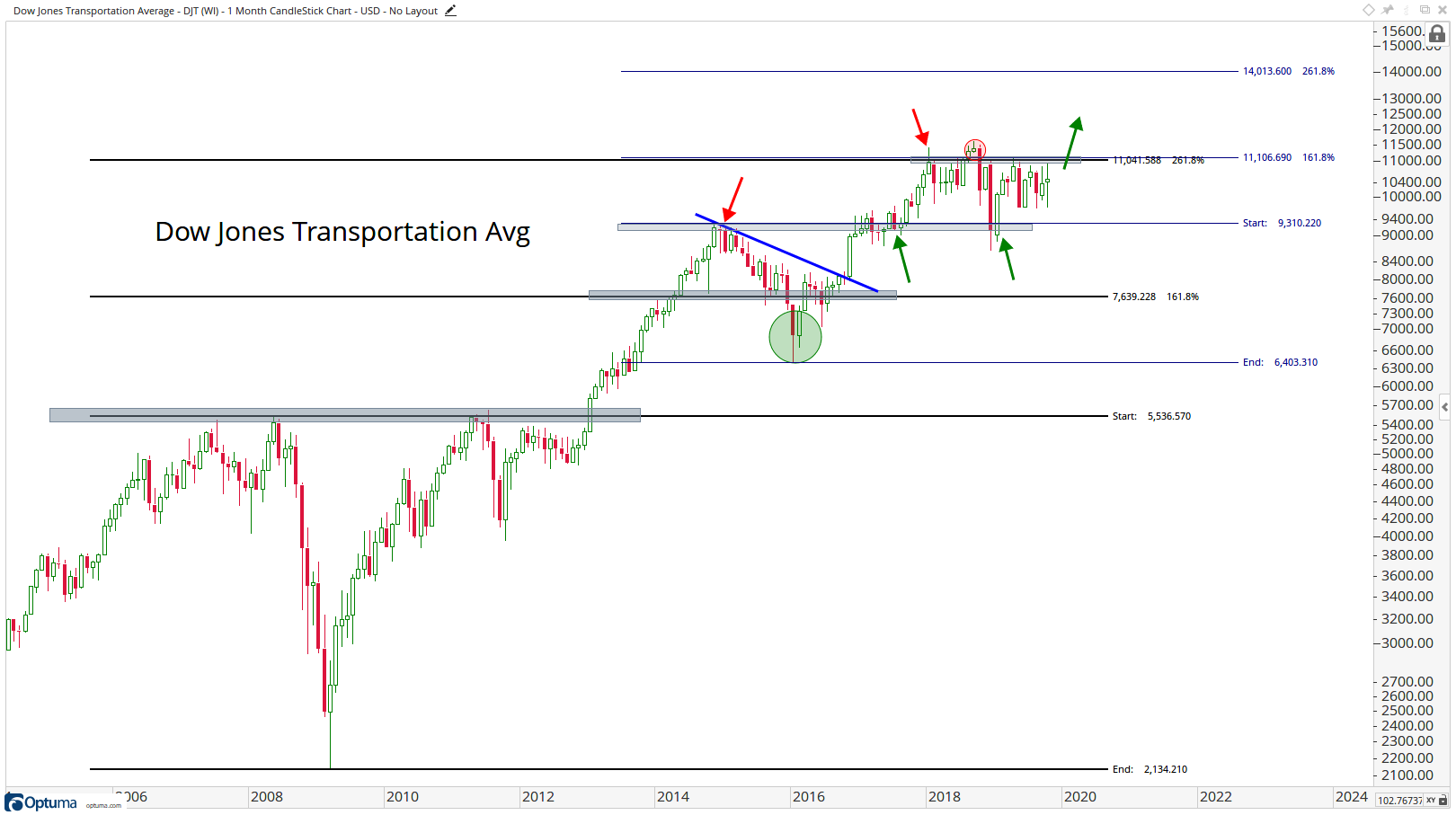 The Nasdaq Composite went out at another new high. What’s there not to like here? 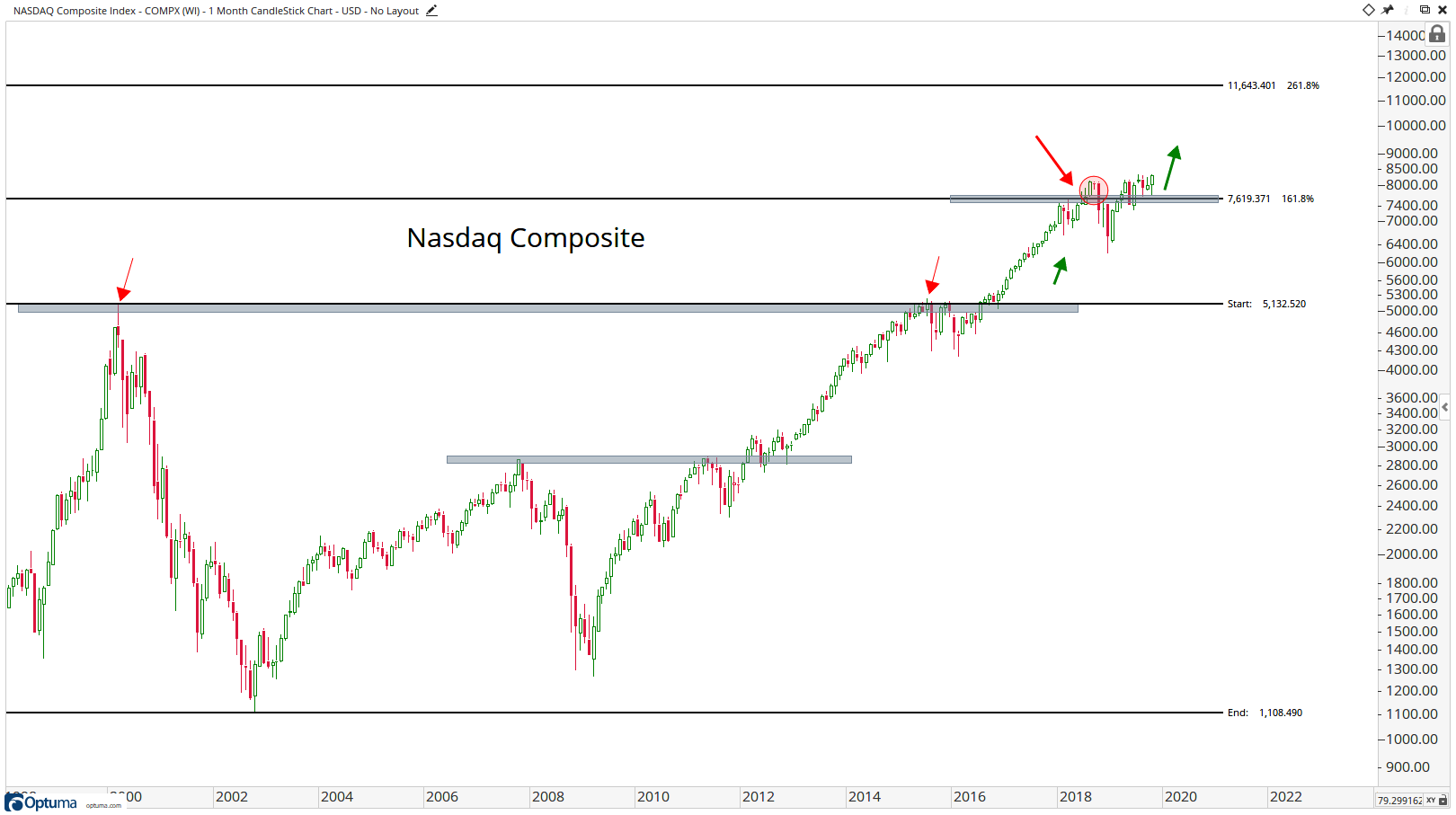 Same thing with the Nasdaq100. If we’re above 181, how can we not possibly be very aggressively long the Nasdaq, and therefore its largest sectors and components? Another one hundred points of upside in $QQQ is not out of the question. We could see a similar move to 2016-2017: 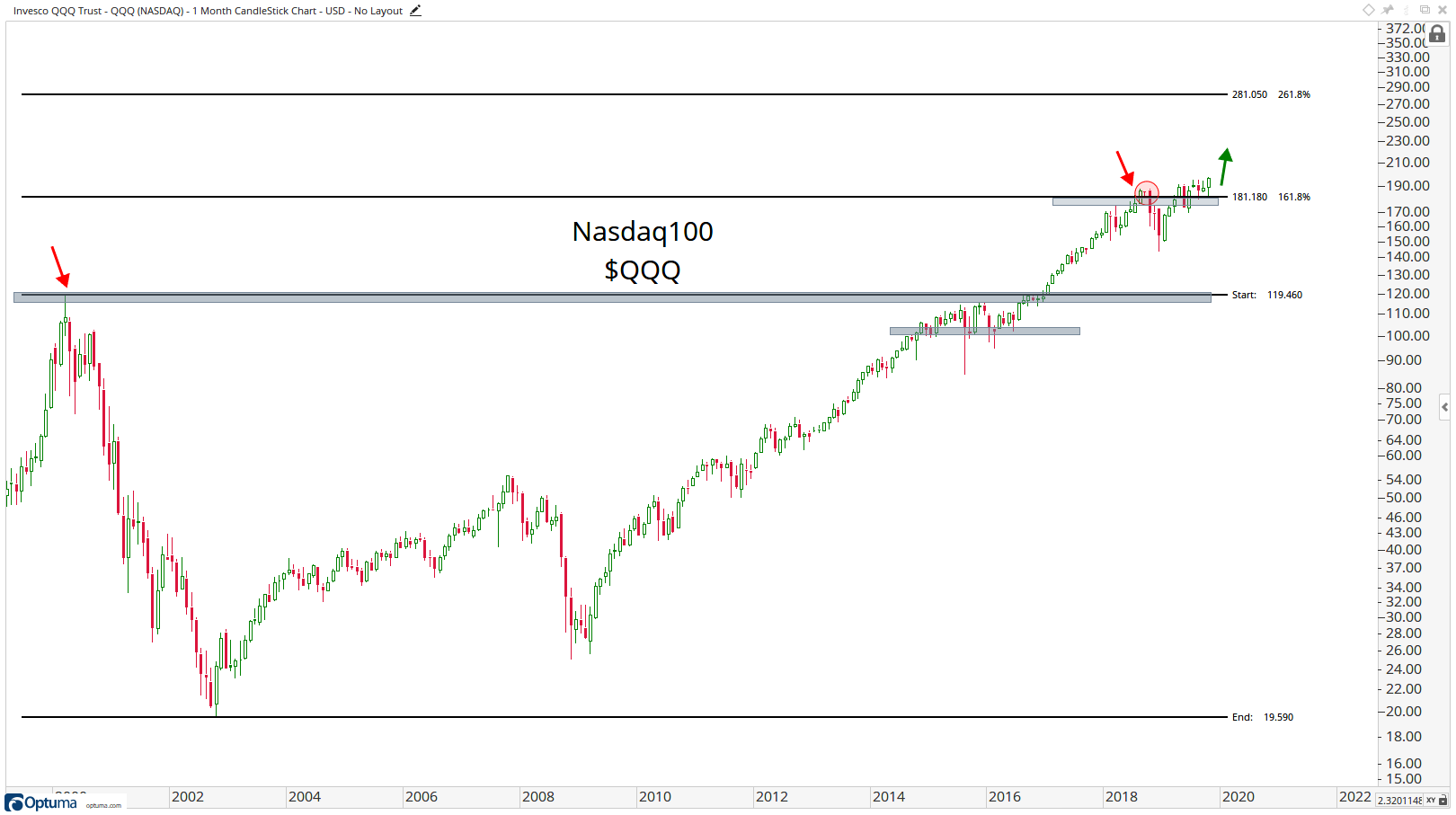 That exact same conversation can be had about Technology, where new highs is nothing we’re not already used to: 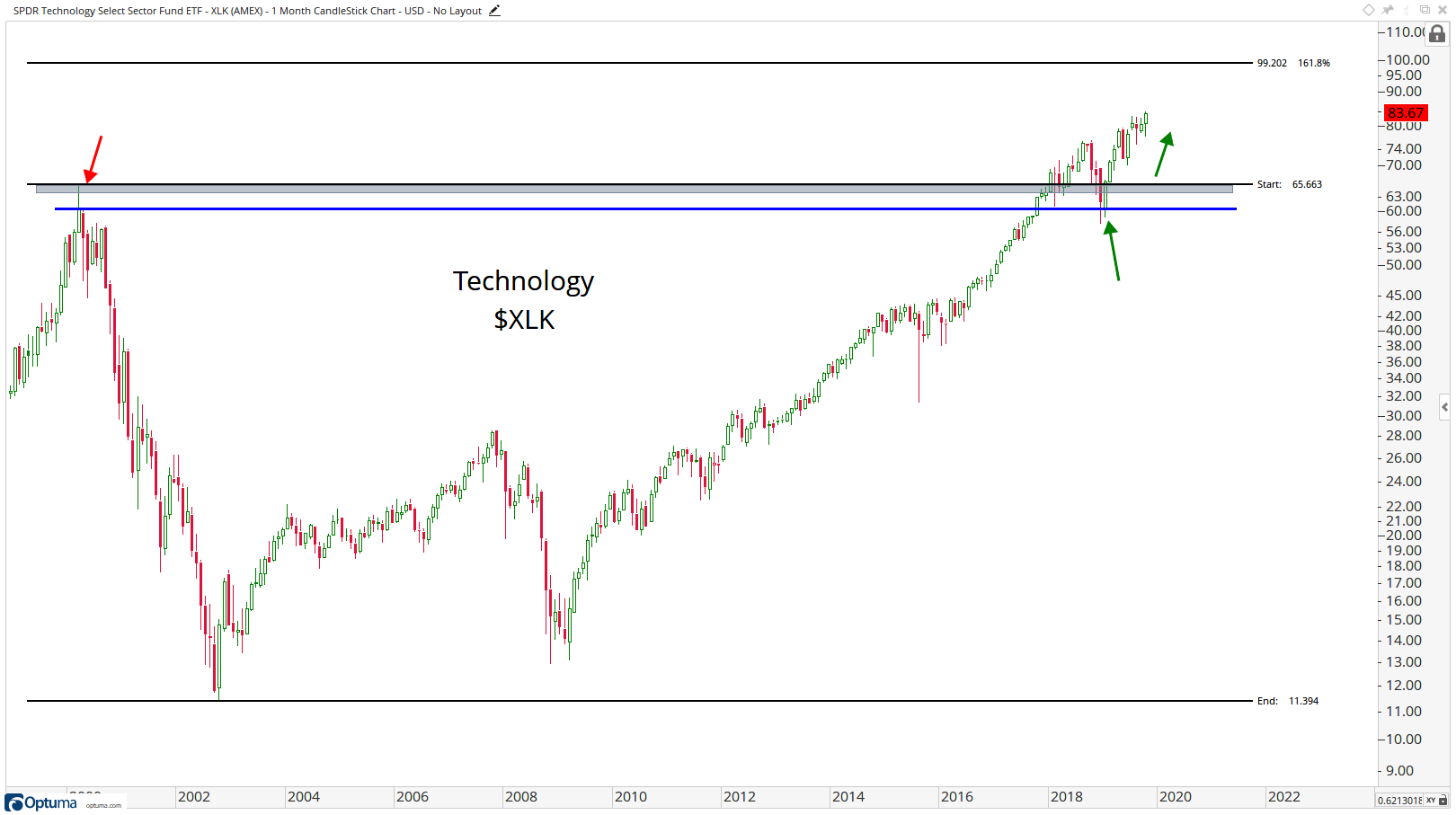 Within that space the largest stocks in the world are in Technology. Both Apple and Microsoft went out at new all-time monthly closing highs: 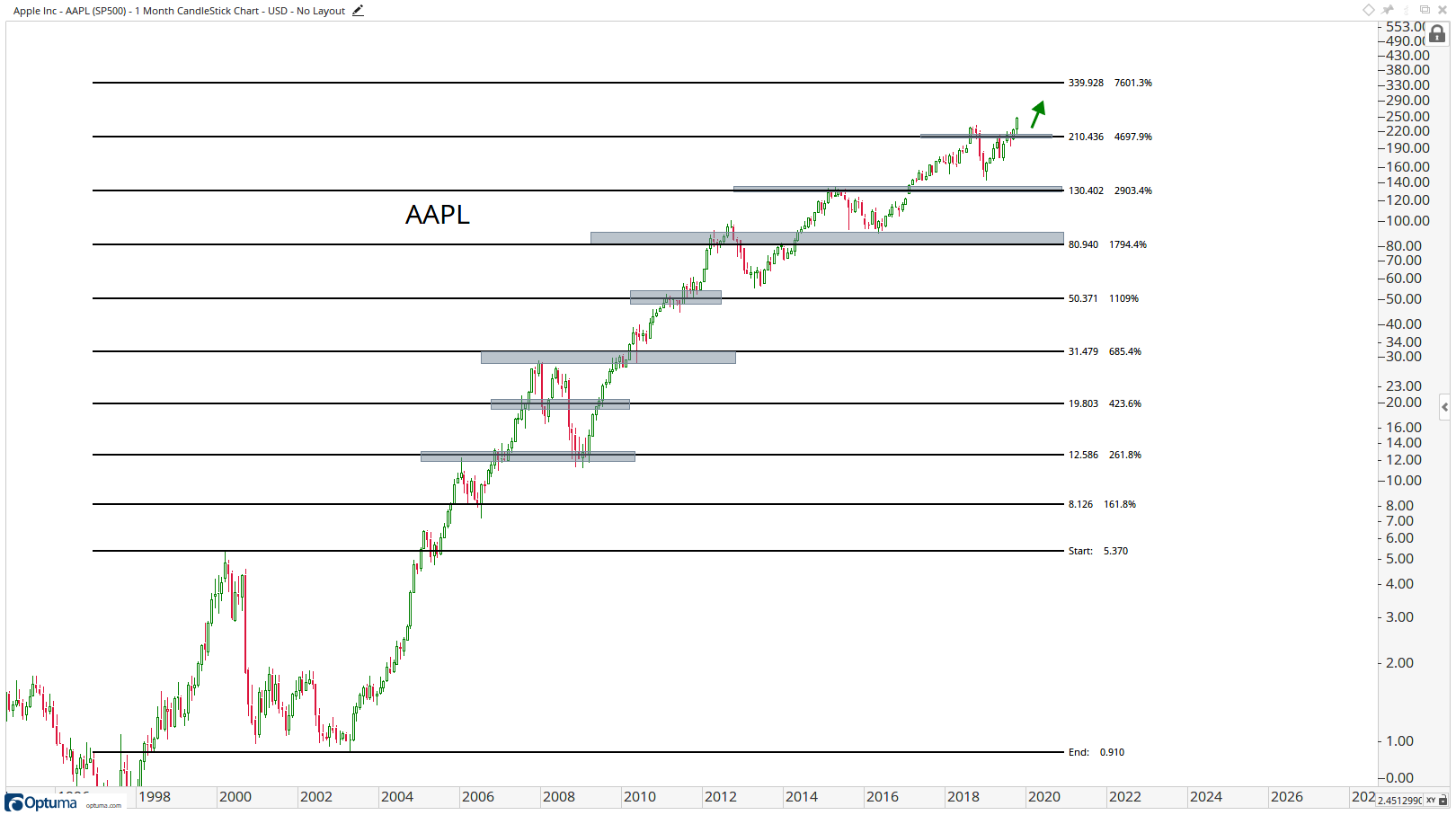 We’ve talked plenty about Microsoft and the implications this resolution would have on the stock, Tech and the overall market. The Buyers and Sellers have decided: Up 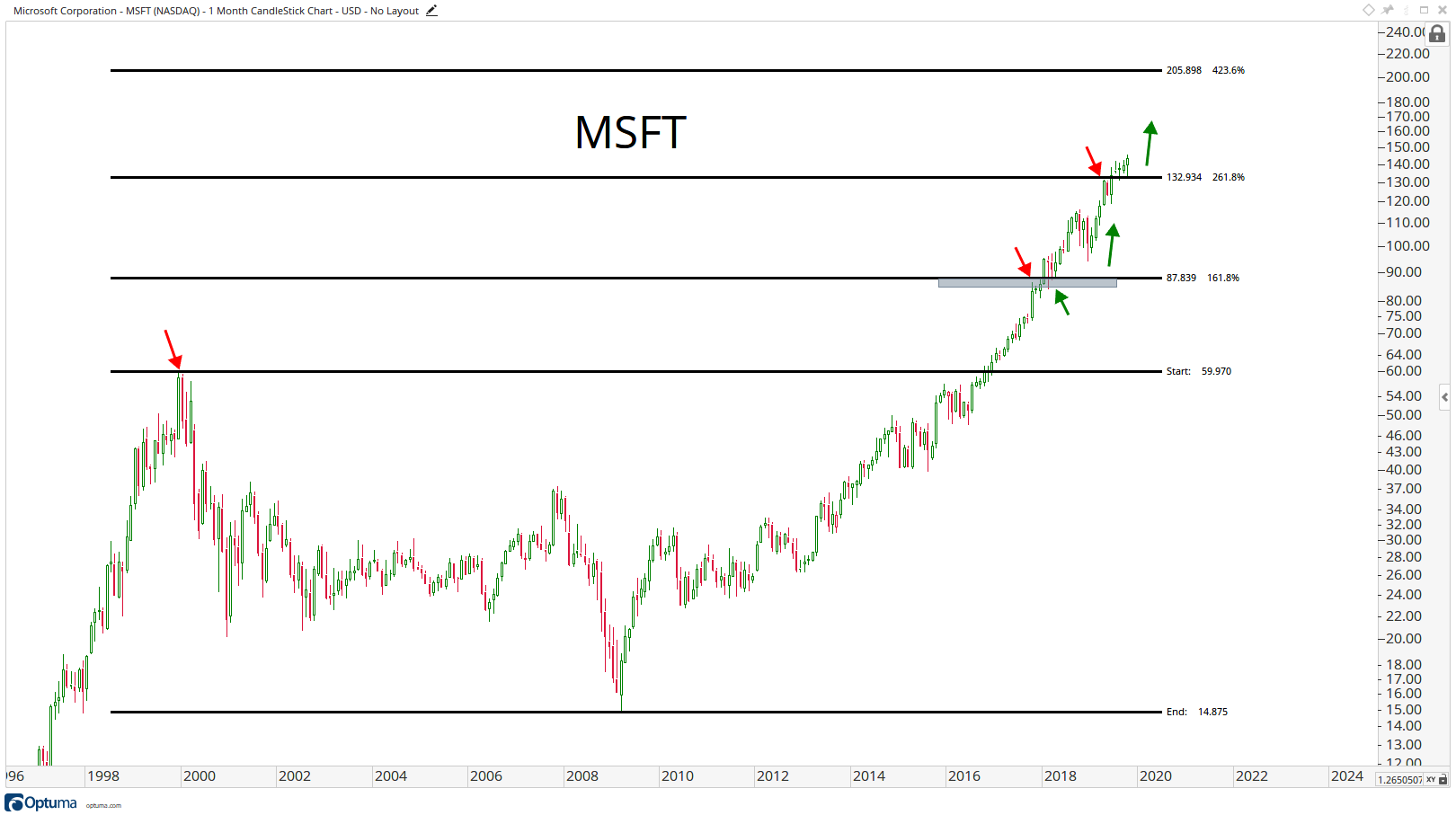 Even Google, which is now technically a Communications stock, broke out to close at new all-time monthly closing highs. This is not a downtrend in the world’s biggest stocks: 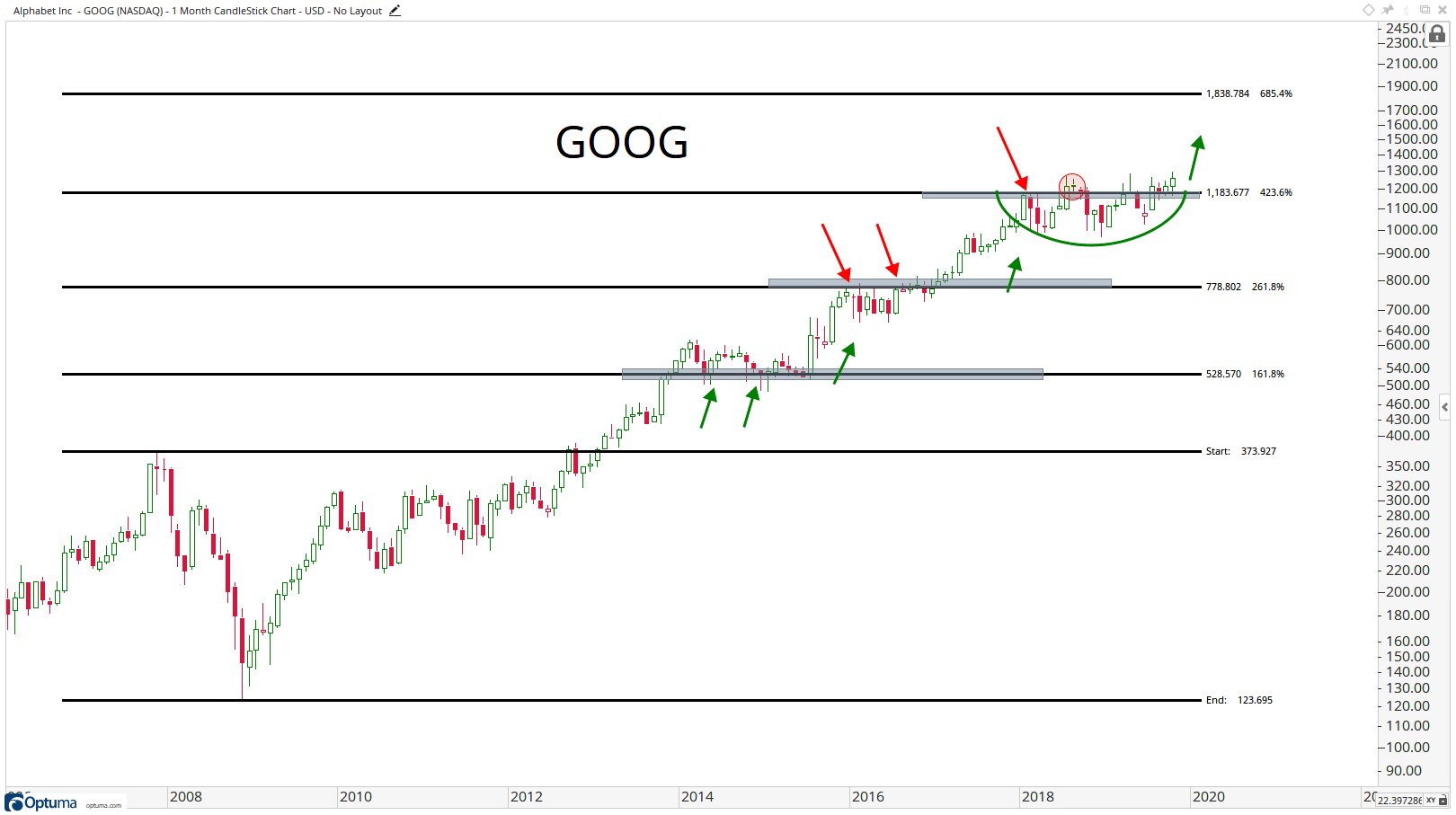 In Small-cap land, the underperformance is obvious. With the Large-caps making new highs pretty much across the board, the little guys aren’t quite there yet. I do think they get there: 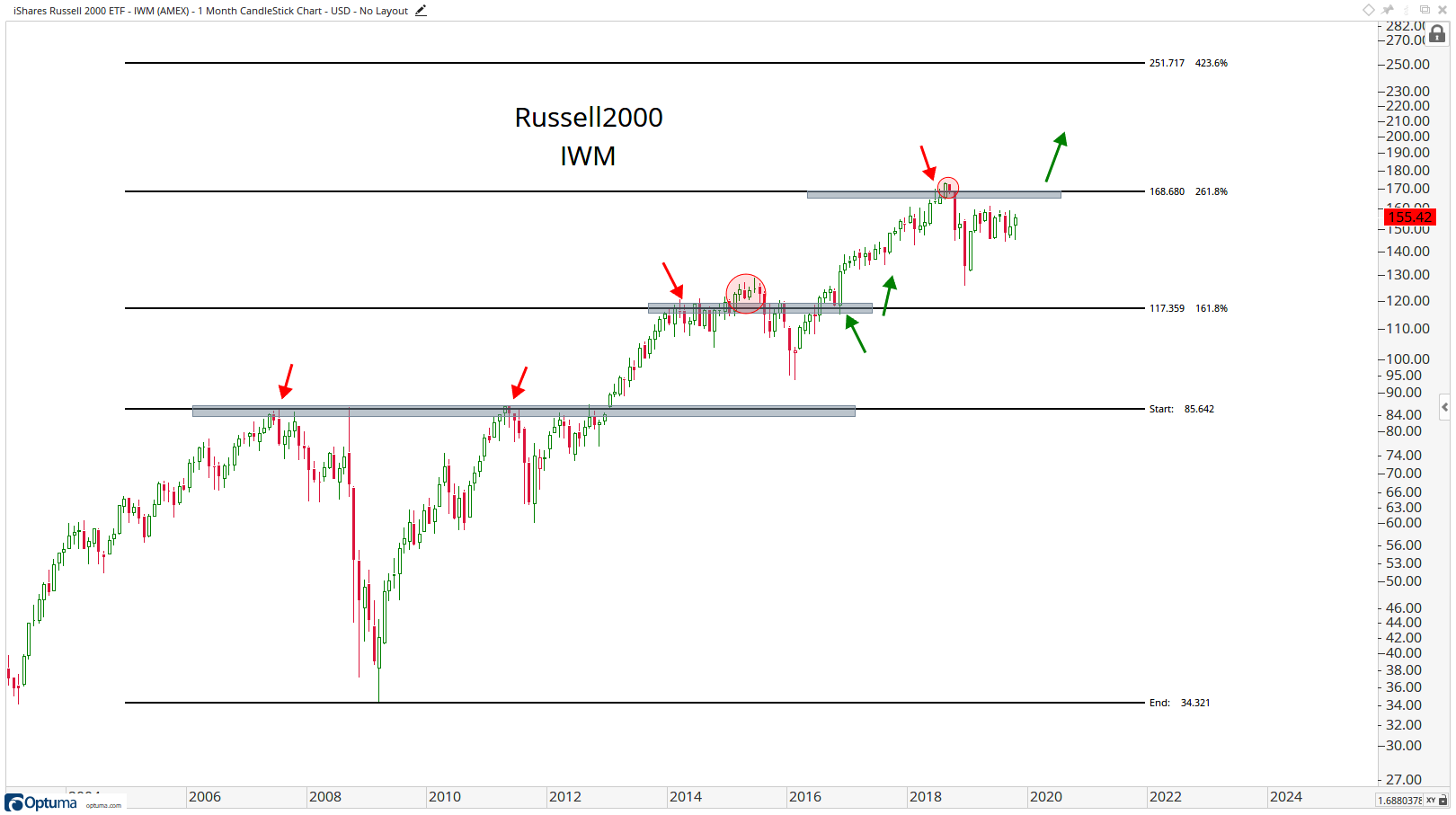 You can see the strength in the Mid-caps as they are able to hold above 325, which has been a big level for a us for a long time. If we’re above that, then “a crisis” is not something we want to bet on: 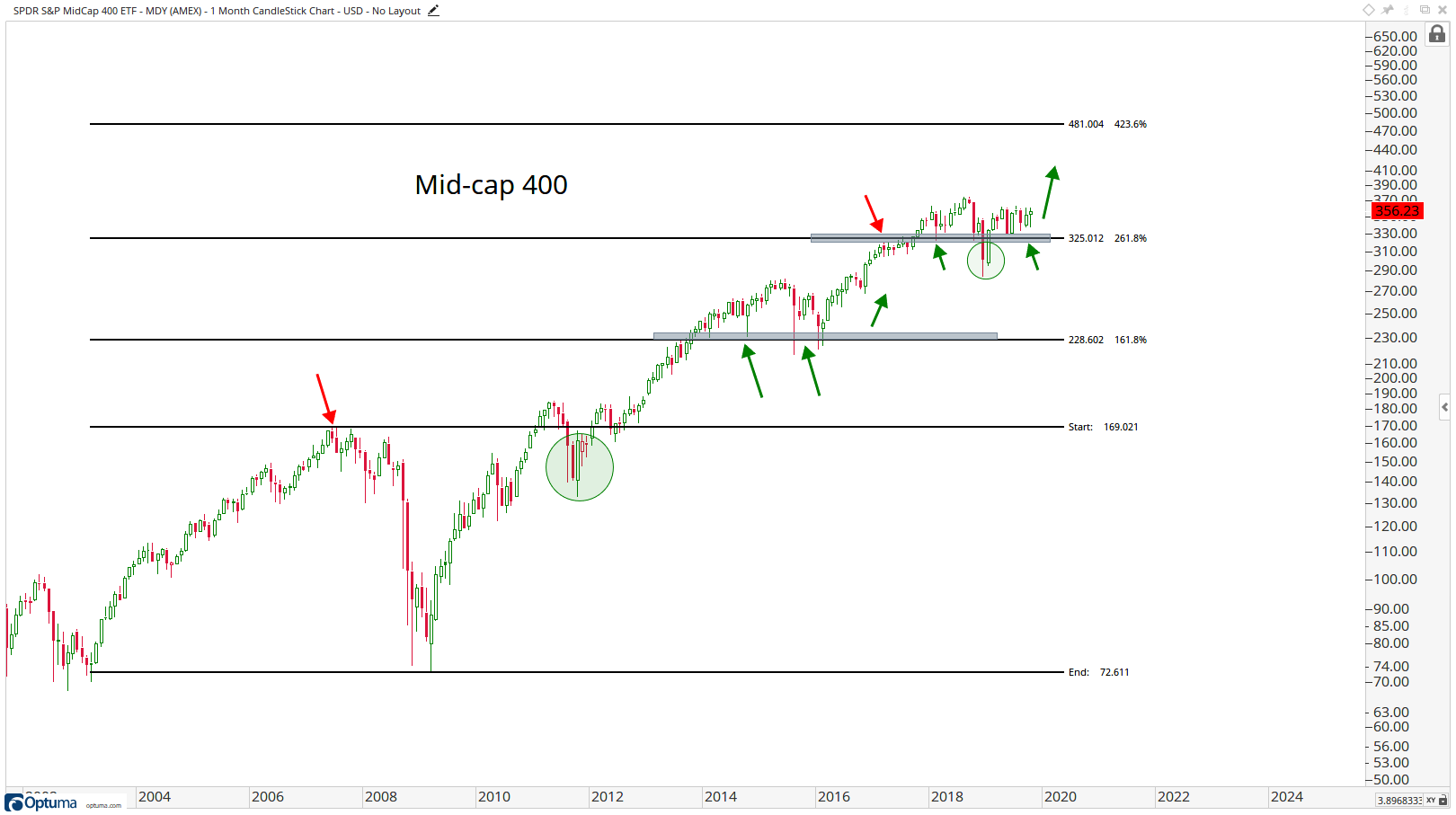 Looking much broader, check out the S&P1500 continuing to push up against former highs to close at an all-time monthly closing high. If we’re above 690, it’s all systems go! 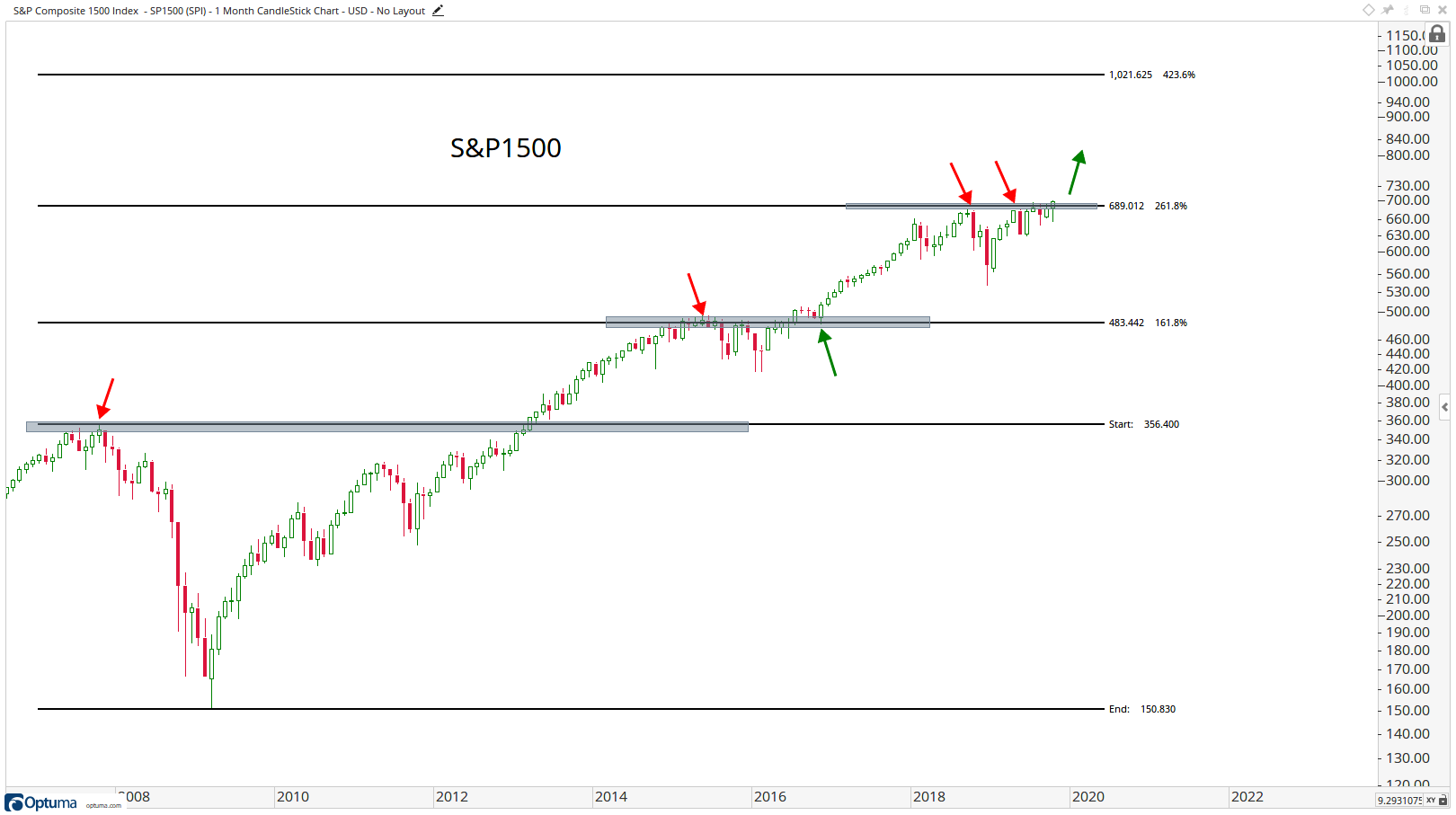 We treat JP Morgan Chase as another Index in the U.S. because its bellwether status. We had been talking about how this tight range resolved would tell us a lot about the strength of JPM, Financials and the overall market. Well, there you have it. If we’re above former highs, this breakout stands: 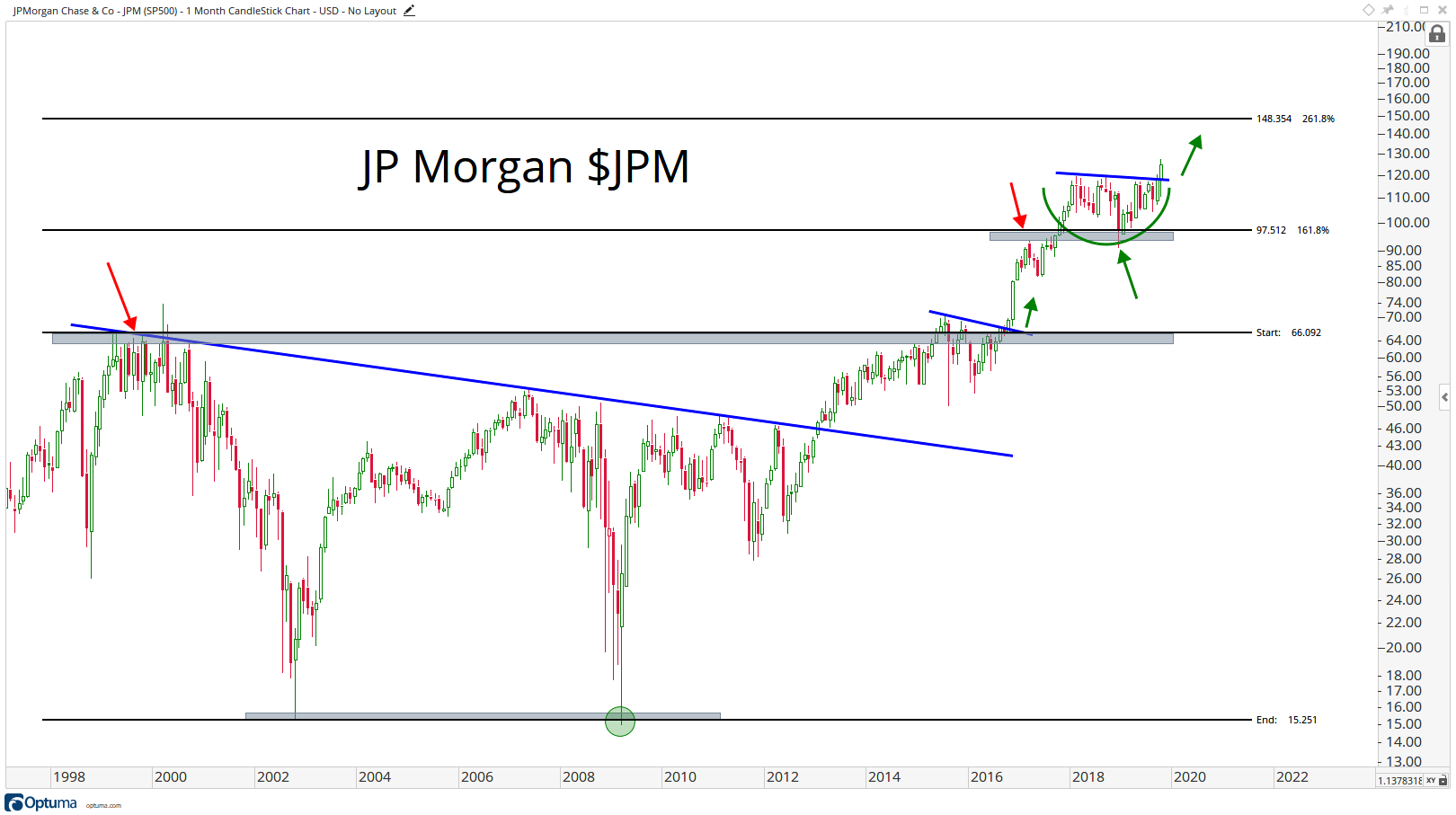 Financials as a sector also look promising. The index is still below the 2007 highs, so “too far too fast” or things like “too high” are simply not true. I’d argue we haven’t even gotten started yet. This is one that points to a new up leg in the US Stock Market just beginning, certainly not ending: 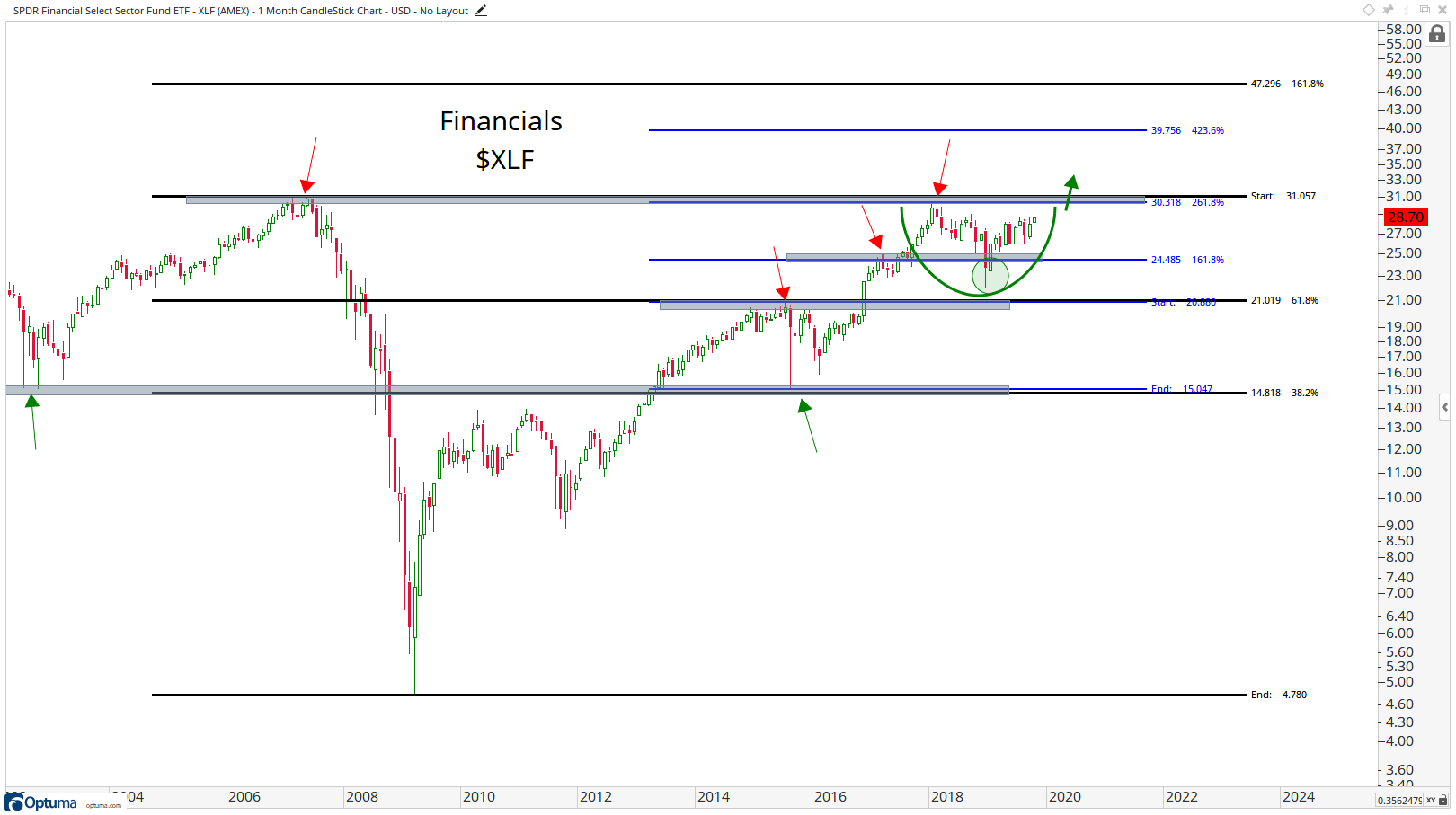 Regional Banks above the 2007 highs is a green light to buy for us: 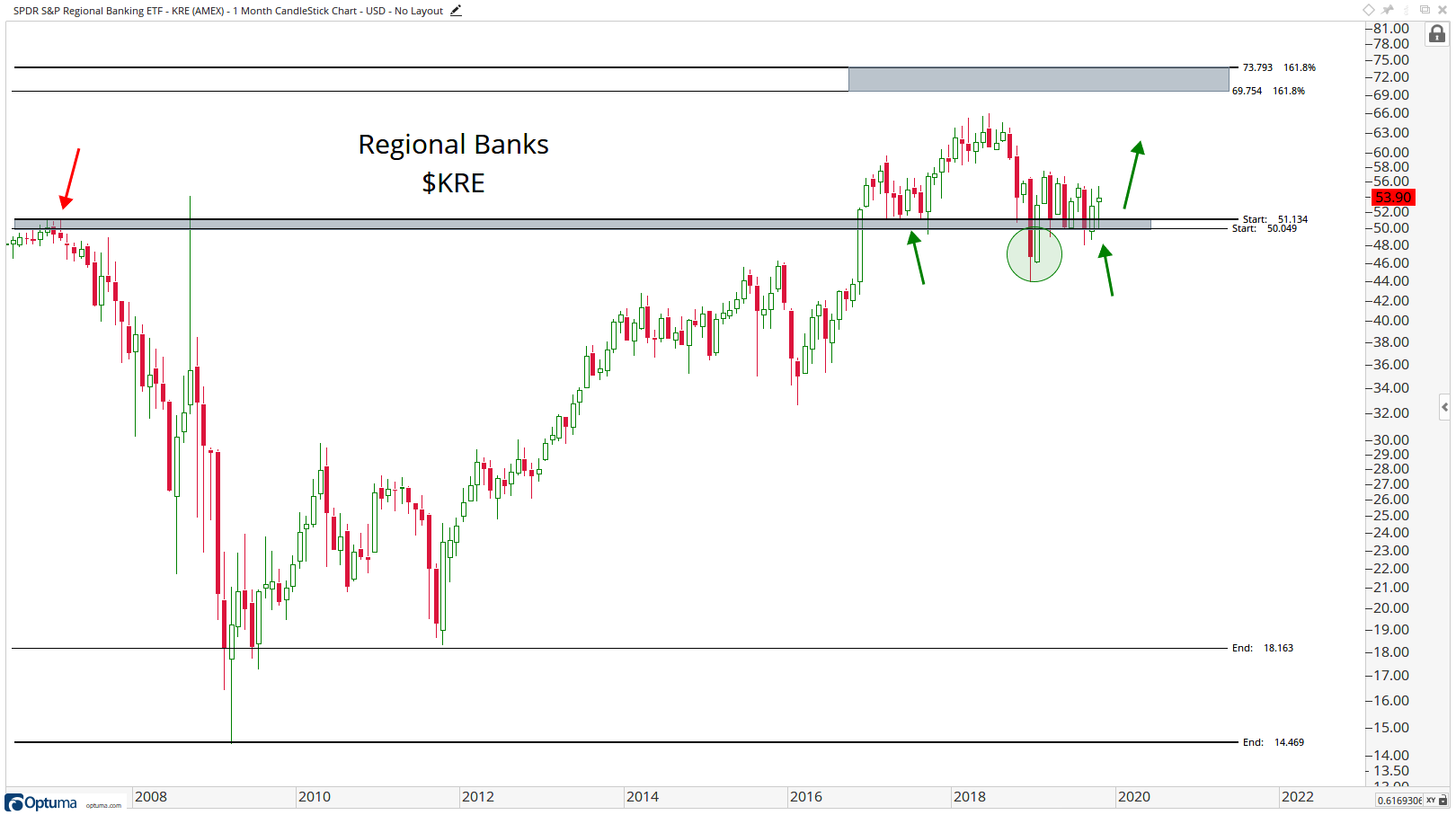 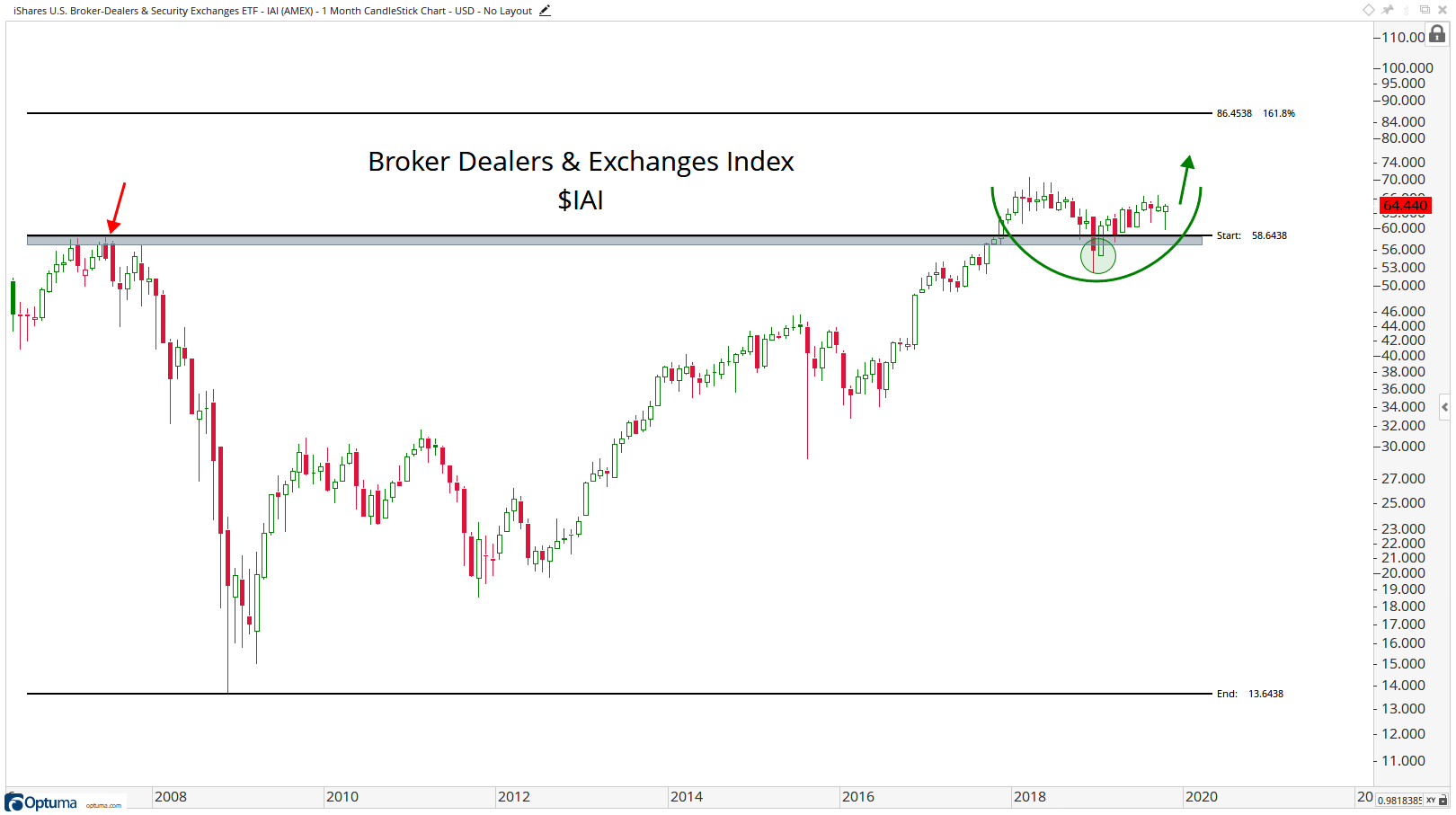 How about Consumer Discretionary? New all-time monthly closing highs! I’ll be much more convinced if we’re above 121.50 or so, because that would mean we would have exceeded the key extension level that goes back to the 2007-2012 consolidation. New all-time highs is certainly not a negative, but this one still has a bit of work to do. 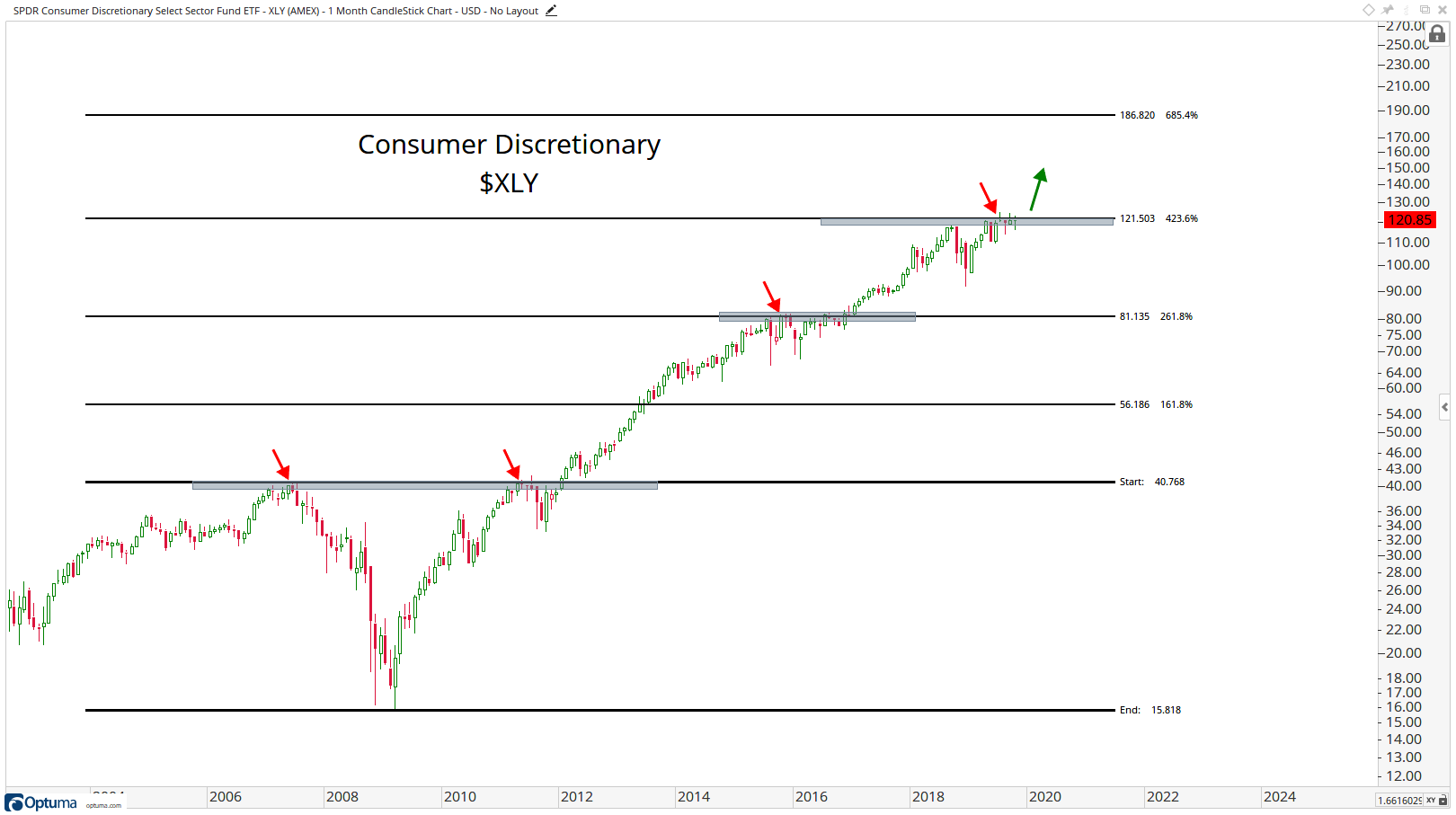 And even Healthcare. This consolidation looks like one that should resolve in the direction of the underlying trend, which is clearly up in this case. Anything above 90 in $XLV and we want to be betting on higher prices for healthcare stocks: 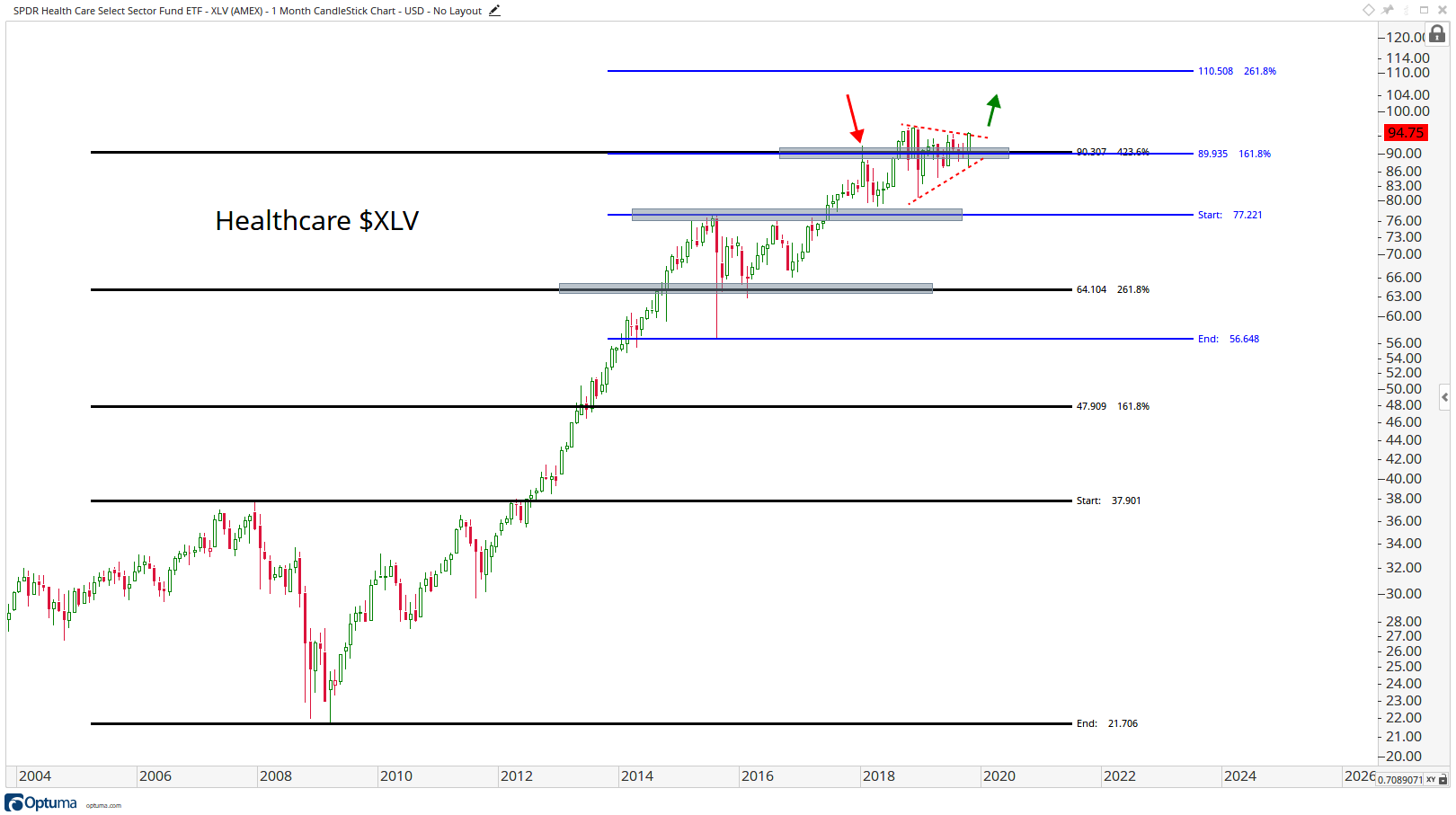 Globally stocks continue to make new highs. Look at the Global100 Index breaking out of a 21-month range to new all-time highs: 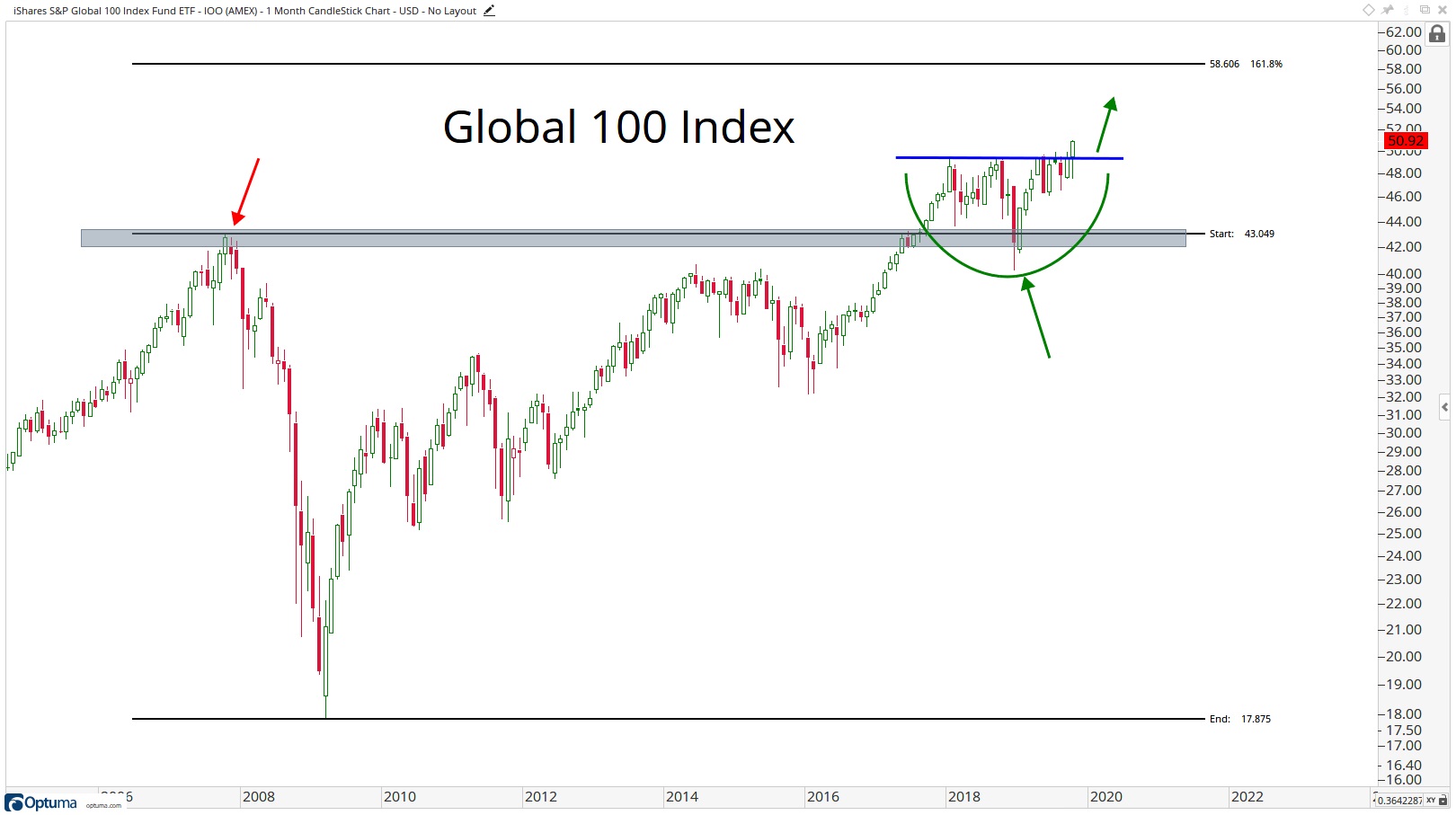 Look at this monthly chart of the Global Dow. Is this a chart you want to buy or one you want to sell? For me, these are the types of things we want to buy: 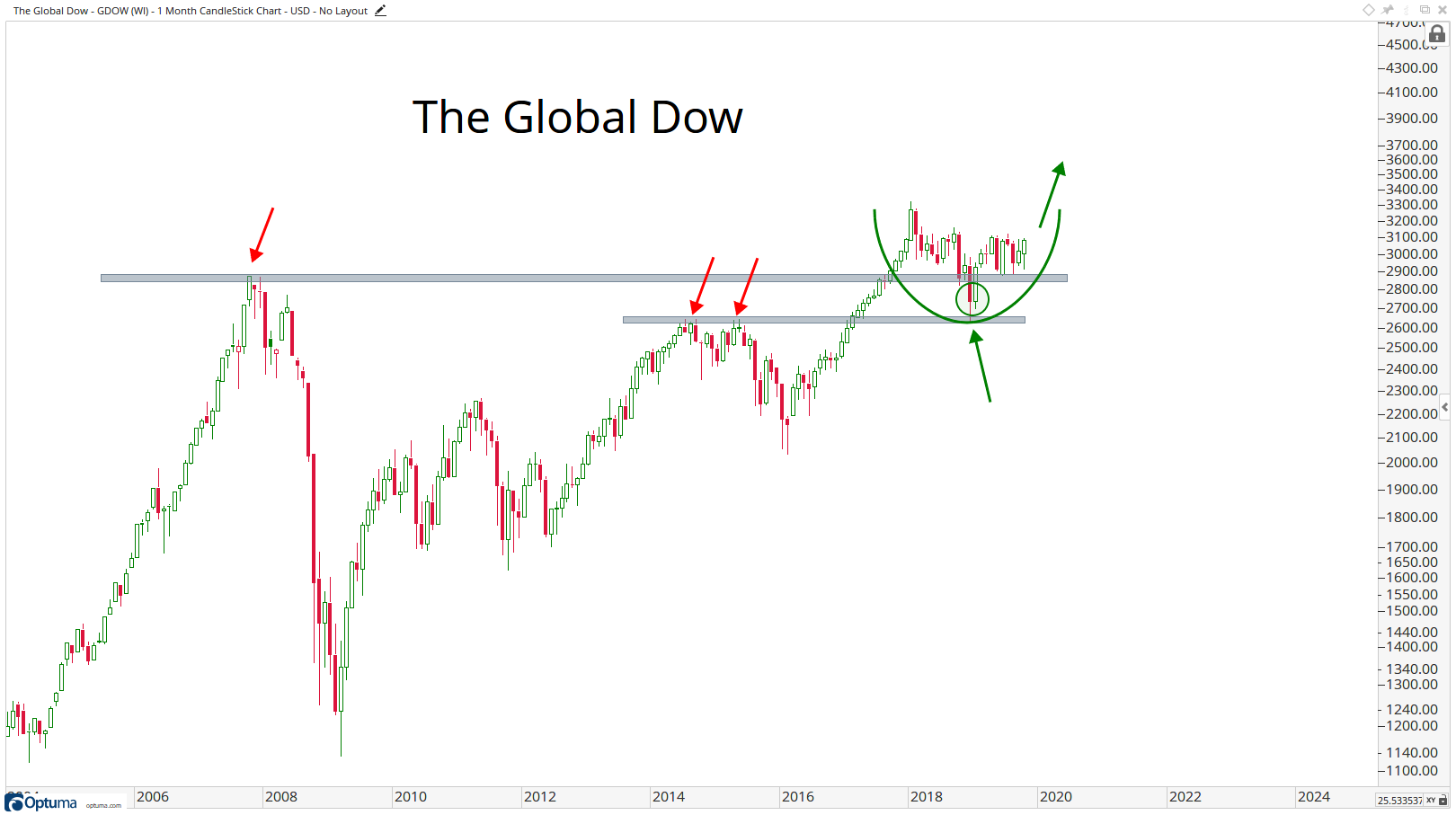 In Precious metals, we’ve wanted be selling Gold throughout October. Bigger picture, however, this looks like something that can get back up towards 1900/oz: 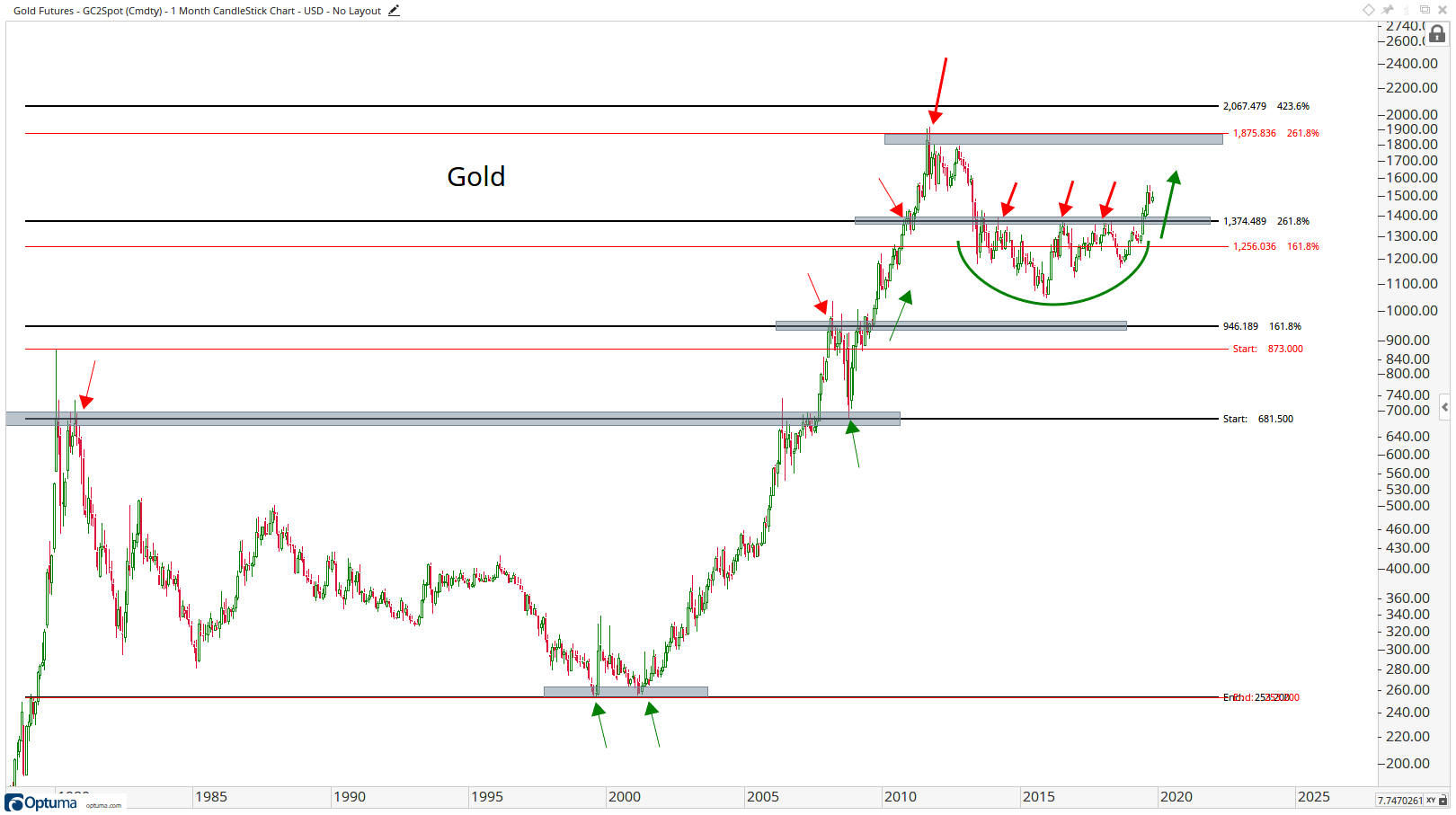 But short-term, we’re still below overhead supply and Commercial Hedgers still have close to their largest net short position in history. We still want to see that unwind before I feel comfortable enough to start putting on long positions again. Let’s be patient with this one:

The Gold Miners Index will likely tell us when it’s time. If we’re above 31 in $GDX, then I’m totally ok with owning gold and gold stocks. But if experience has taught me anything it’s that this is likely to happen without commercial hedgers having on their largest net short position ever. I think we keep letting this unwind for now. It’s someone else’s problem, not ours. 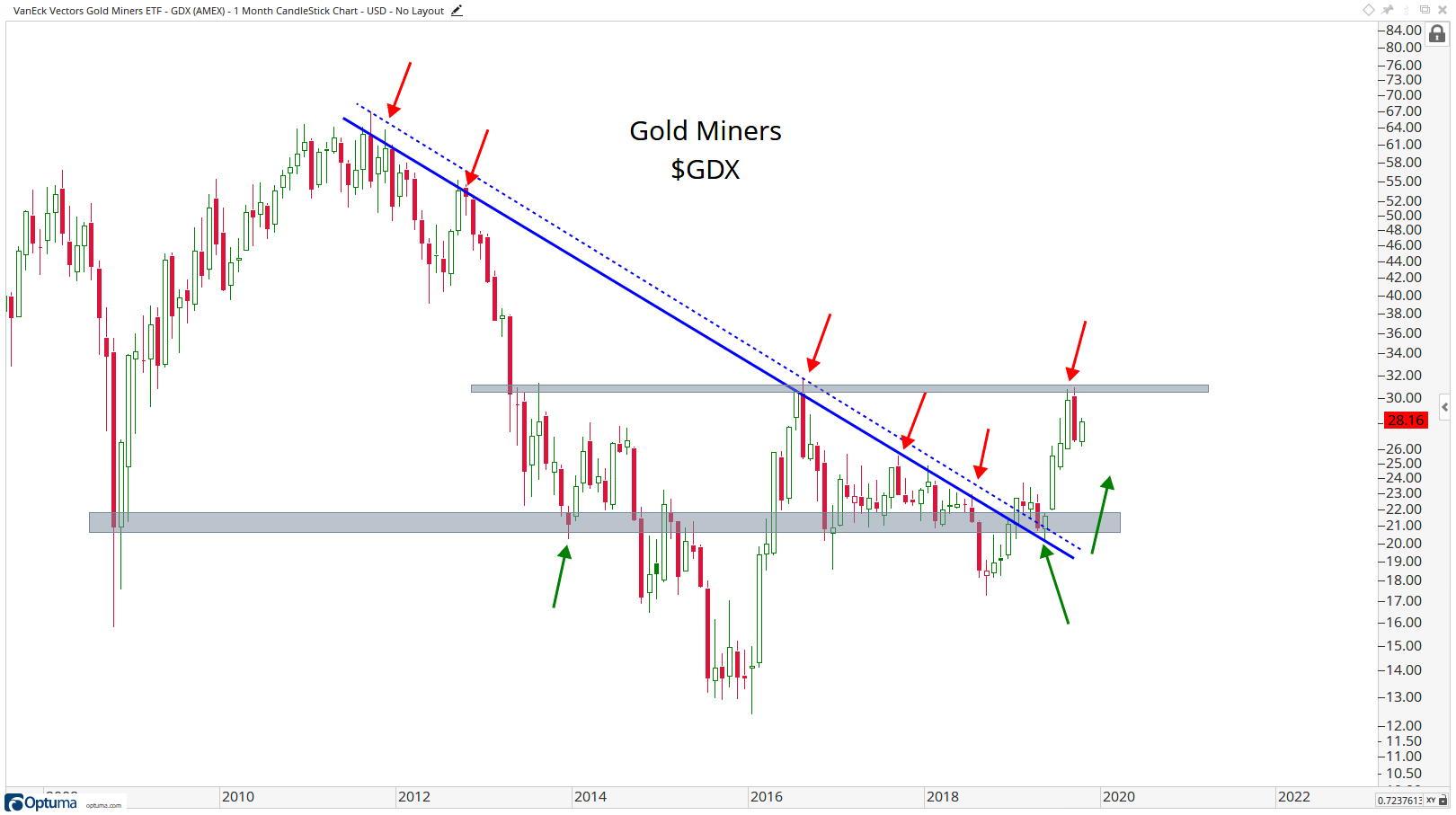 In currencies, it looks like the US Dollar is vulnerable to further selling down towards 94. If we’re below 98, this thesis is still valid: 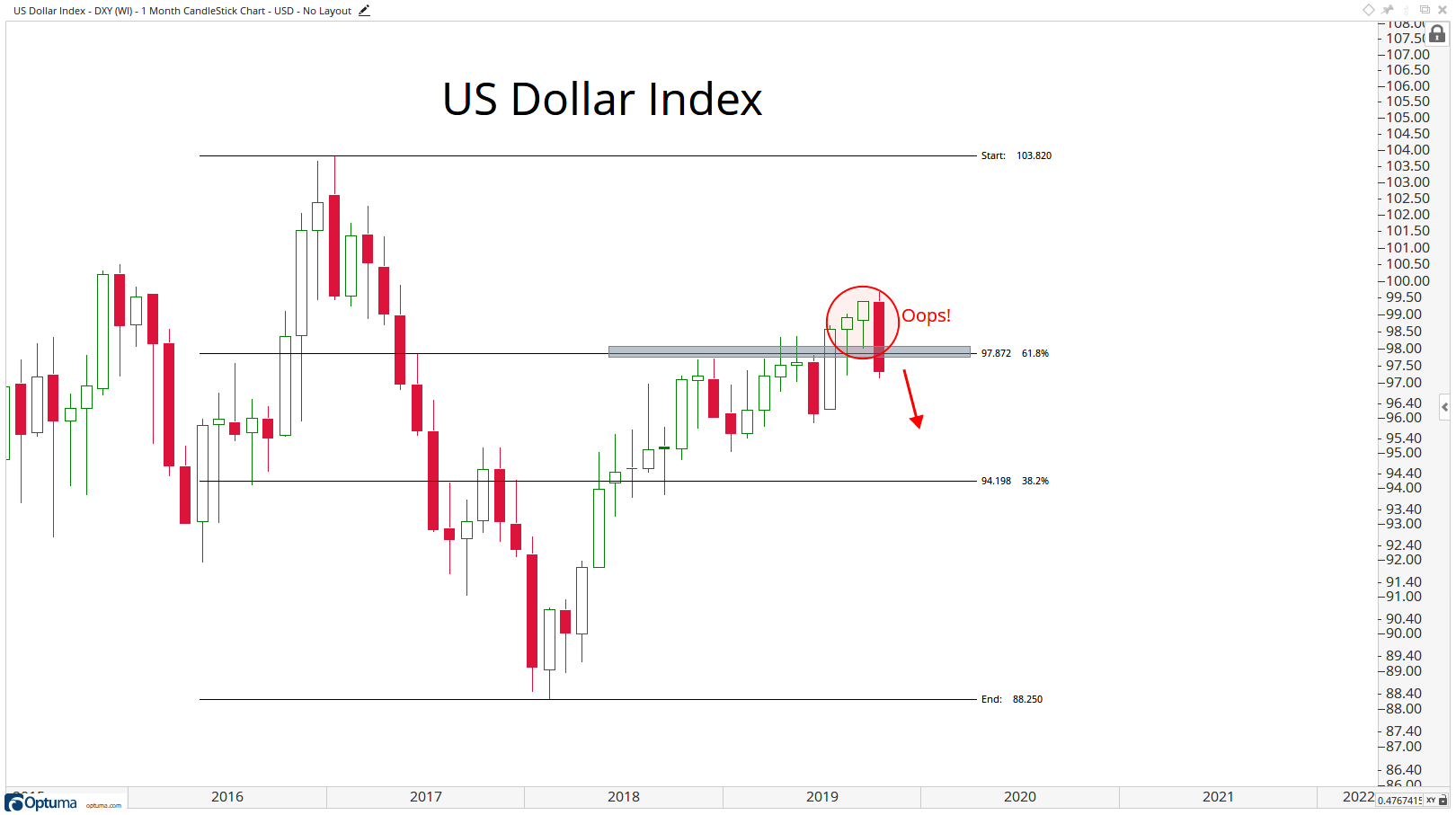 An interesting one is the British Pound. What a great month this thing just had. We’re expecting another retest of all that former support near 1.40: 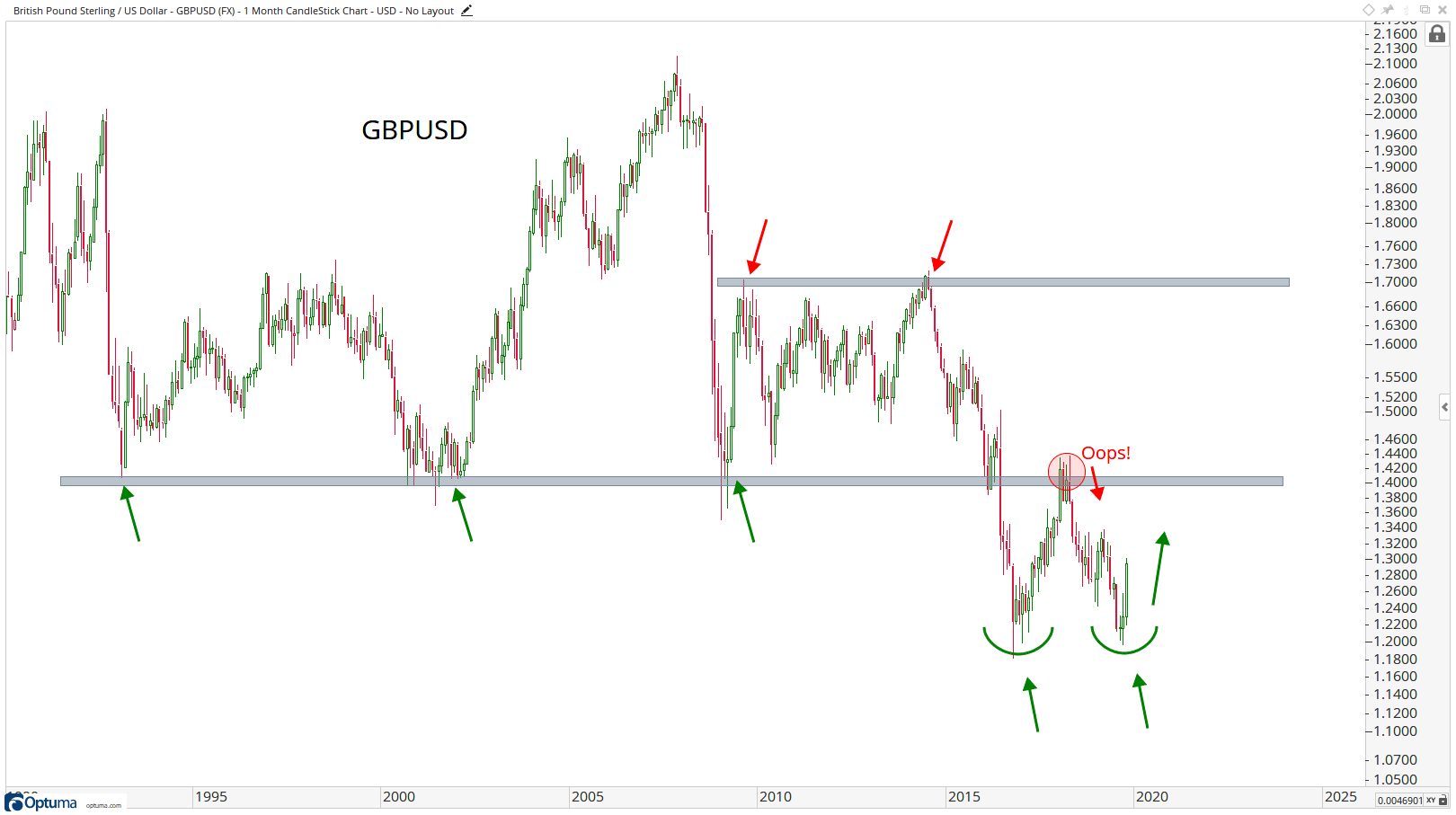 Meanwhile, look at European Stocks breaking out above this downtrend from the past 20 years. This is something we’re not used to seeing. It’s something new. If you were betting this wouldn’t happen, I think it’s time to start reevaluating that bearish thesis. The market is speaking. Are you listening? 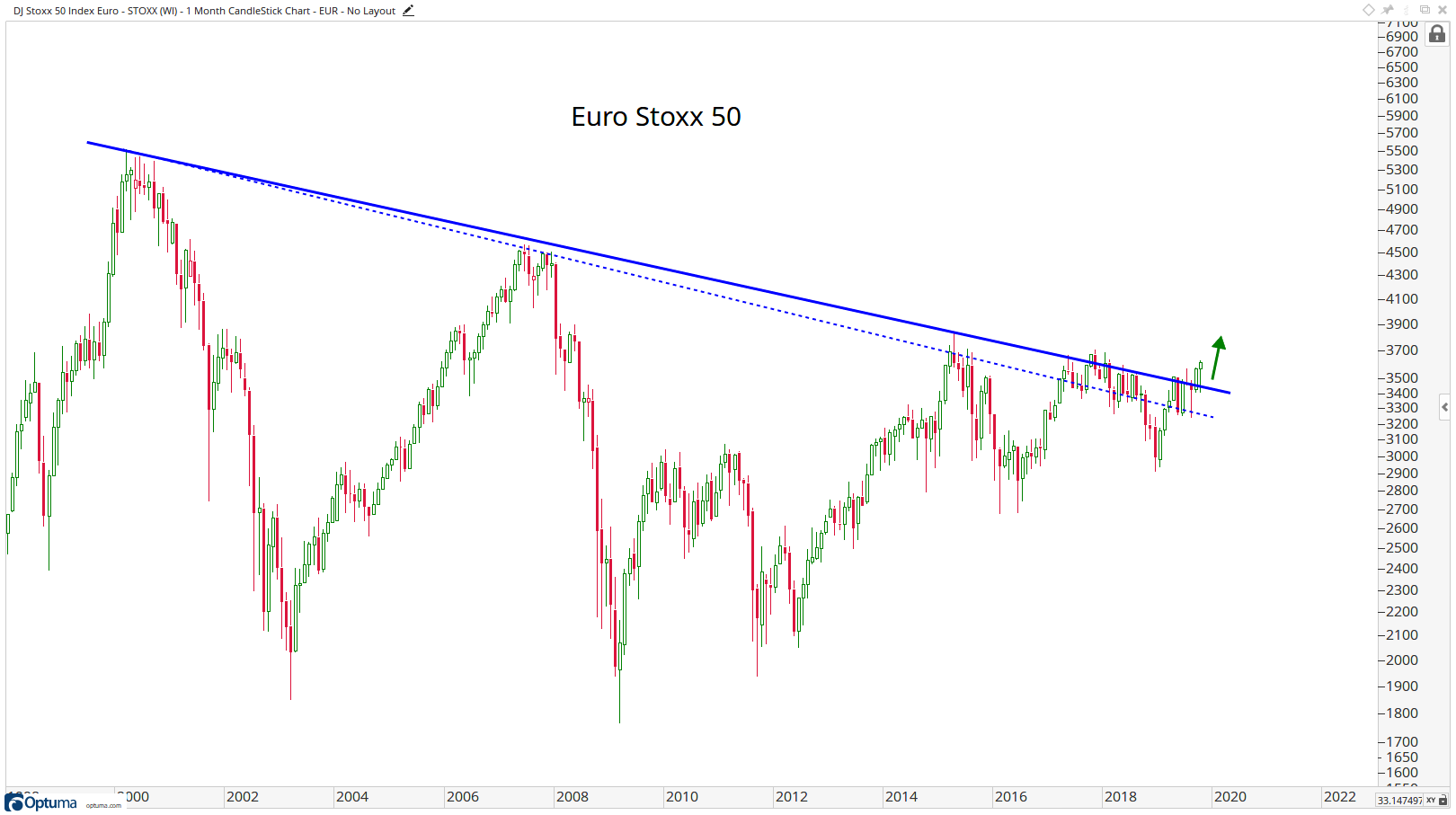 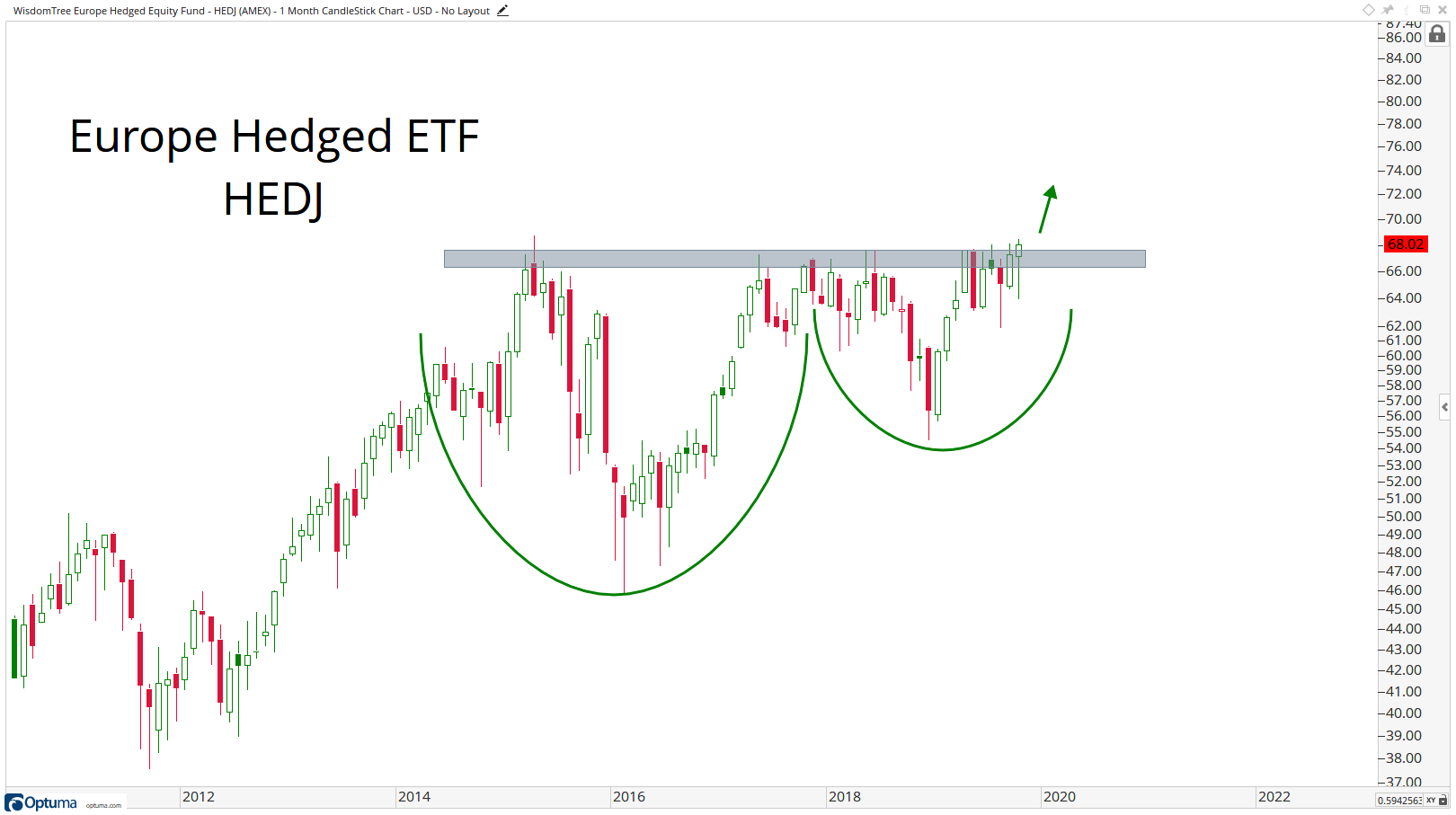 The last question I will propose to you is to give me an honest answer about the Value-line Index. Remember, this measures more of the median move in stocks throughout the market. Is it like this? 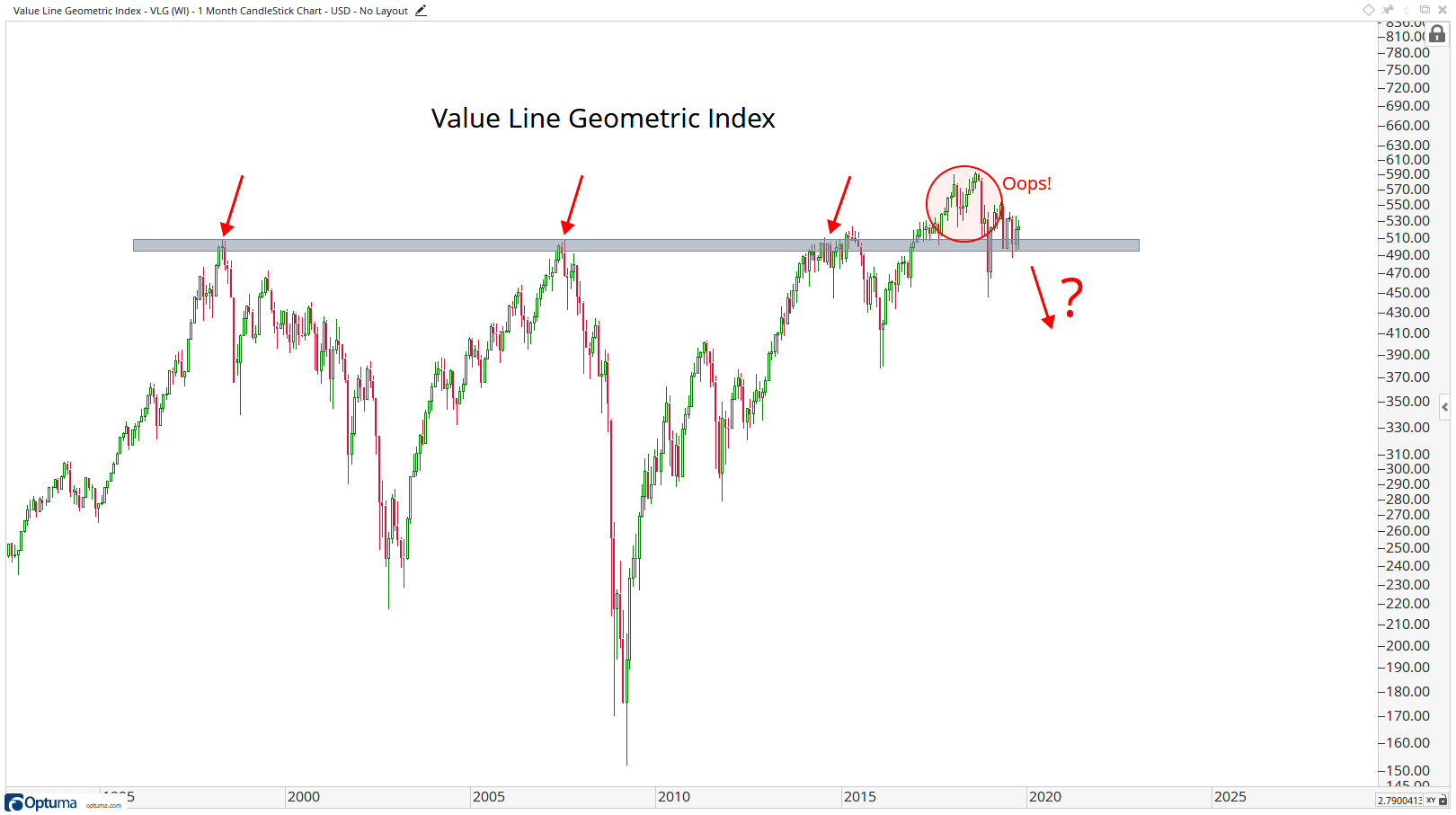 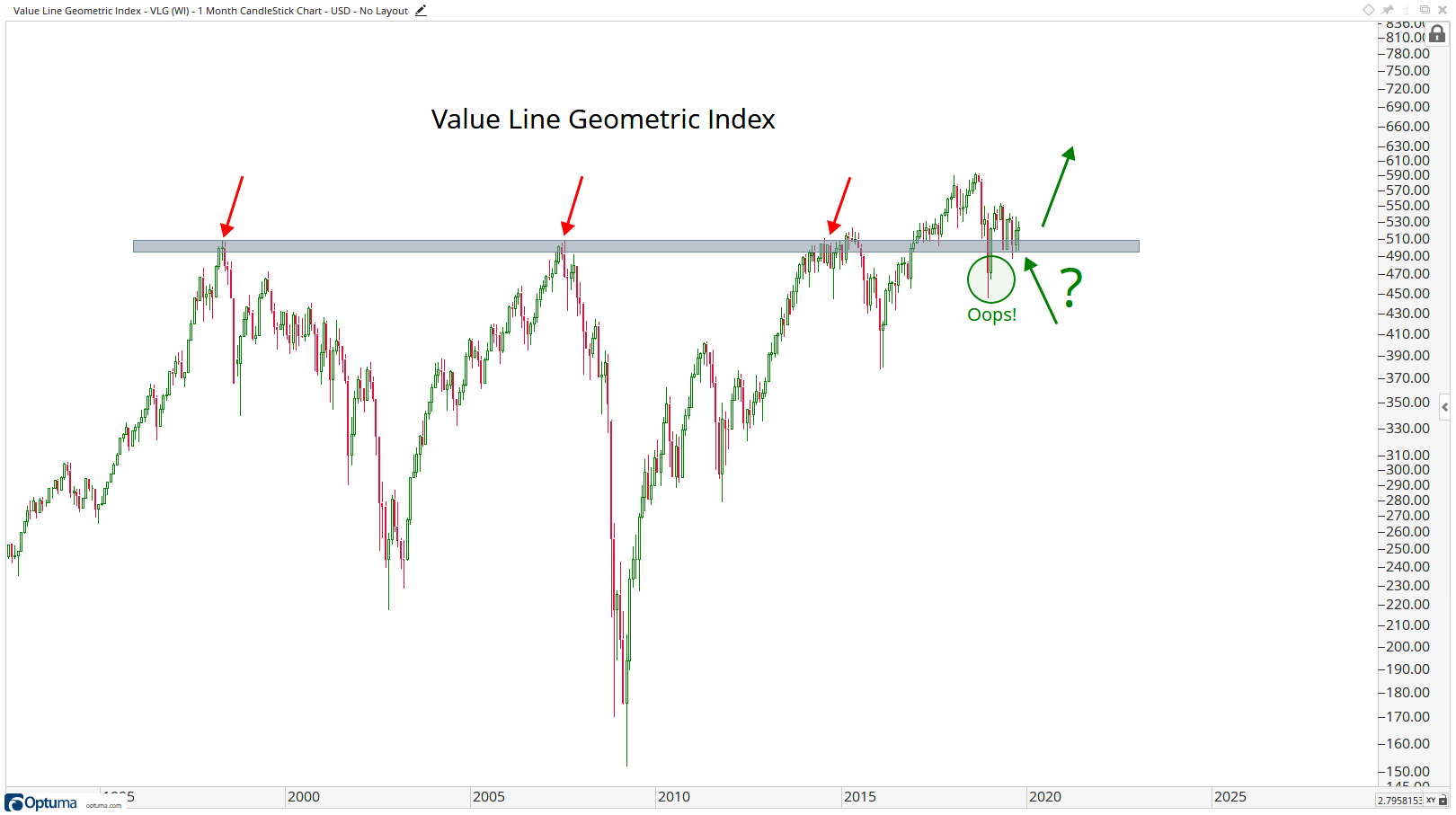 My bet is the second one. I think stocks go higher. Much higher.

The permabears are in a bad spot. I don’t feel bad for them. If they’re not disciplined enough to change their approach as the data proves all of their theories to be invalid, then deserve to be gone. They will not be missed.

In our case, we’re not perma-anything. We want to be buying stocks. Period. At some point, like last October, things will change and we’ll act accordingly. But for now, the trends are up and it would be foolish of us to fight that.