Earlier in the week, JC & I were chatting online about some possible trade opportunities, and we had the following riff on Microsoft $MSFT:

JC: Hey, $MSFT long straddles.
Sean: You in? or are you asking if it’s a good idea?
JC: I think it’s tight. It either breaks out and rips, or just get absolutely destroyed.
Sean: Yeah. Vol is a little higher than I’d prefer for that trade. But if you think a move is imminent soon, I don’t hate it.
JC: I think it breaks out. But like $XLK in October, if it doesn’t it’s over. It’s either a “good buy” or a “goodbye.”
Sean: A couple more days of sideways action might lower the vol a little more, which would make me happy 🙂

Fast forward to today and $MSFT volatility has come in a smidgen.

The fact is, $MSFT has been in a $10 range since early June. I’d share a chart with you, but you’d be bored as the range has tightened even more in recent weeks into basically an $8 dollar range. To me, especially in this tape, $MSFT is beginning to look like a coiled spring that can pop in either direction. It just needs a catalyst. That catalyst might be coming on October 23rd when it announces its next earnings report. Or it could be something external in the ongoing Tariffs nonsense or some other clown show move out of Washington.

At the end of the day, the reason won’t matter. But any breakout from this range is likely to be met with some significant range expansion.

As such, putting on a classic range expansion like a long straddle makes sense here. I don’t care which way we move (I’d prefer down, as I’d benefit from a volatility increase), I just need the move to be a big one. With volatility being reasonably low in $MSFT options, this affords me the ability to go a little further out in time, giving any breakout plenty of time to grow legs.

I’m buying a $MSFT March 140 Straddle for approximately $18.25. This means I’ll be long equal amounts of both 140 calls and 140 puts in the March expiration series. 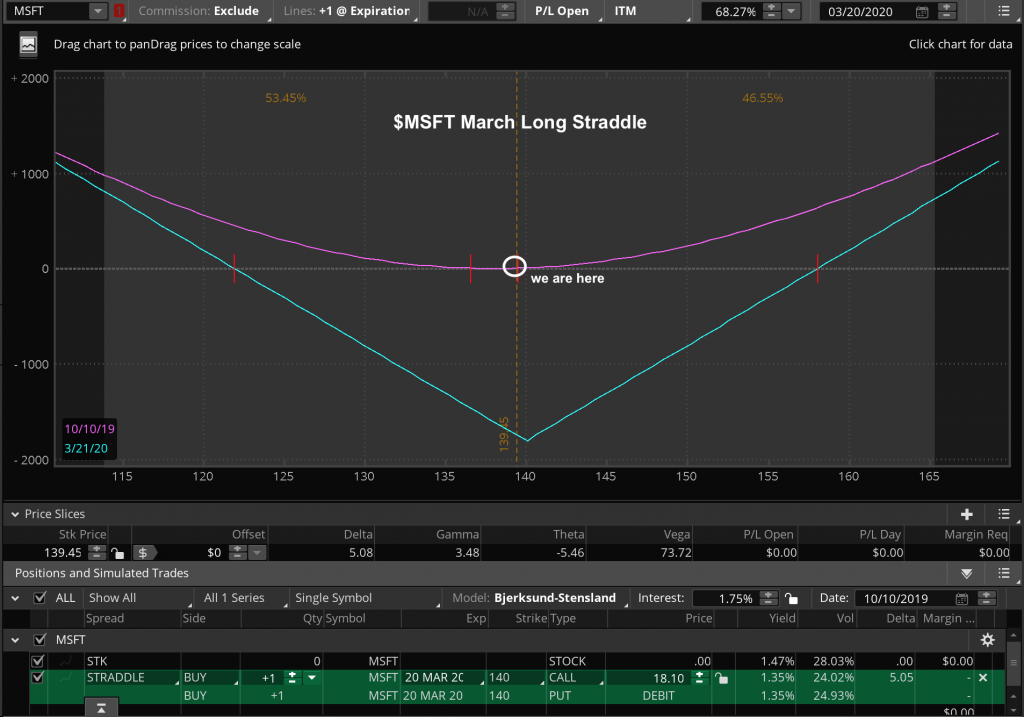 This position is ultimately looking for a big move below 122-ish or above 158-ish by March expiration. If $MSFT is stuck anywhere between these levels when March 1st comes around, I’ll close this spread and begrudgingly accept my loss. Theta becomes a major enemy in this position as we approach expiration later that month. I won’t be fighting it.

If or when the move happens, I’m not going to get cute. I’m going to get greedy. I’m going to let this position ride. Anything can happen, and my risk is defined. I’ll just trust my thesis and let time be my friend for as long as I can. Once I’m into the month of March, I’ll close the options on the losing side of the trade and then I’ll exit the winning side at the first break of nearby support/resistance.

For example, let’s say on March 1 $MSFT is trading below $115/share. In this case, my calls would be on the losing side and I’d close them down for whatever I can get (won’t be much). I’ll hold the long, winning puts and I’ll hold them for as long as I can until $MSFT bounces through any nearby upper resistance level. Let the market tell me when to get out. Make sense?

All Star Options subscribers can email me any questions here.

Would you like to leverage Best-in-Class Technical Analysis into killer options trades? Try All Star Options Risk Free!