Some of you guys have been reading my work for over a decade. But I understand there are many newer readers, so I think it’s important to address what’s going on here. I’ve been called a Permabull many times for over 2 years now, meaning that they believed I just always had a bullish bias towards stocks. The truth is that while so many were eager to pick a top during this entire rally, I was consistently bullish because the weight of the evidence pointed that way. This is no longer the case and our approach has had to adapt over the past week to a new environment.

We’re fortunate to have been accurate with our risk levels. As soon as Small-caps broke 169, things got bad. There was no reason to be in them for us if we were below that in $IWM. Large-caps broke our levels early this week and things got progressively worse after our prices were breached. That is why we set them. That’s the good news. The bad news is that I’m confident this is just the beginning.

I believe we are entering a period of what is, at the very least, a period of consolidation. I think we’re lucky if it’s another 2015. That wasn’t so bad and markets recovered quickly to begin one of the greatest runs in history. I hope you enjoyed it.

The bigger issue here is that we’ve broken a lot of important levels. This makes any strength vulnerable to overhead supply. In other words, instead of the infamous BTFD – Buy The Freakin Dip, the old STFR – Sell The Freakin Rip is most likely to rule moving forward. I’m sure my friends at Stocktwits will have a lot of fun with this one. That’s just the environment we’re in now. Either we resolve through much lower prices and get it out of the way quickly, like 1987, or it’s a drawn out process that could take 6-12 more months.

Both of those scenarios would be perfectly normal and I think it is what is most likely going to occur. Personally, I’d rather it be 1987 where we lose a cool 20+% over night and then we just get rocking again. Some firms will go out of business, journalists will have the time of their lives and it gives us all another story to tell in the future. Think about it, do you ever hear about 1957? No, you hear about 29 and 87. But why can’t we be in 1957? And no one will ever talk about it again. Sideways and boring and then ripping higher afterwards?

If it is a 2015 or a 1957, it is probably the best outcome. Although a frustrating environment for trend followers (because there is no trend), if you can trade a range successfully, there is a lot of money to be made. We’ll see a similar sector rotation and there will be opportunities to buy near the bottom of ranges and sell near the top of them. This is no longer an environment where we just want to be buying the strongest stocks in the strongest sectors. With a new environment comes new strategies. Adapt or die sort of mentality is what we incorporate into our system. It’s a new era.

What sparked this new bearish regime for stocks is the failed breakouts we just got in the S&P500 and Dow Jones Industrial Average, among many other indexes and sectors. You can see a few of my favorites here from the past: 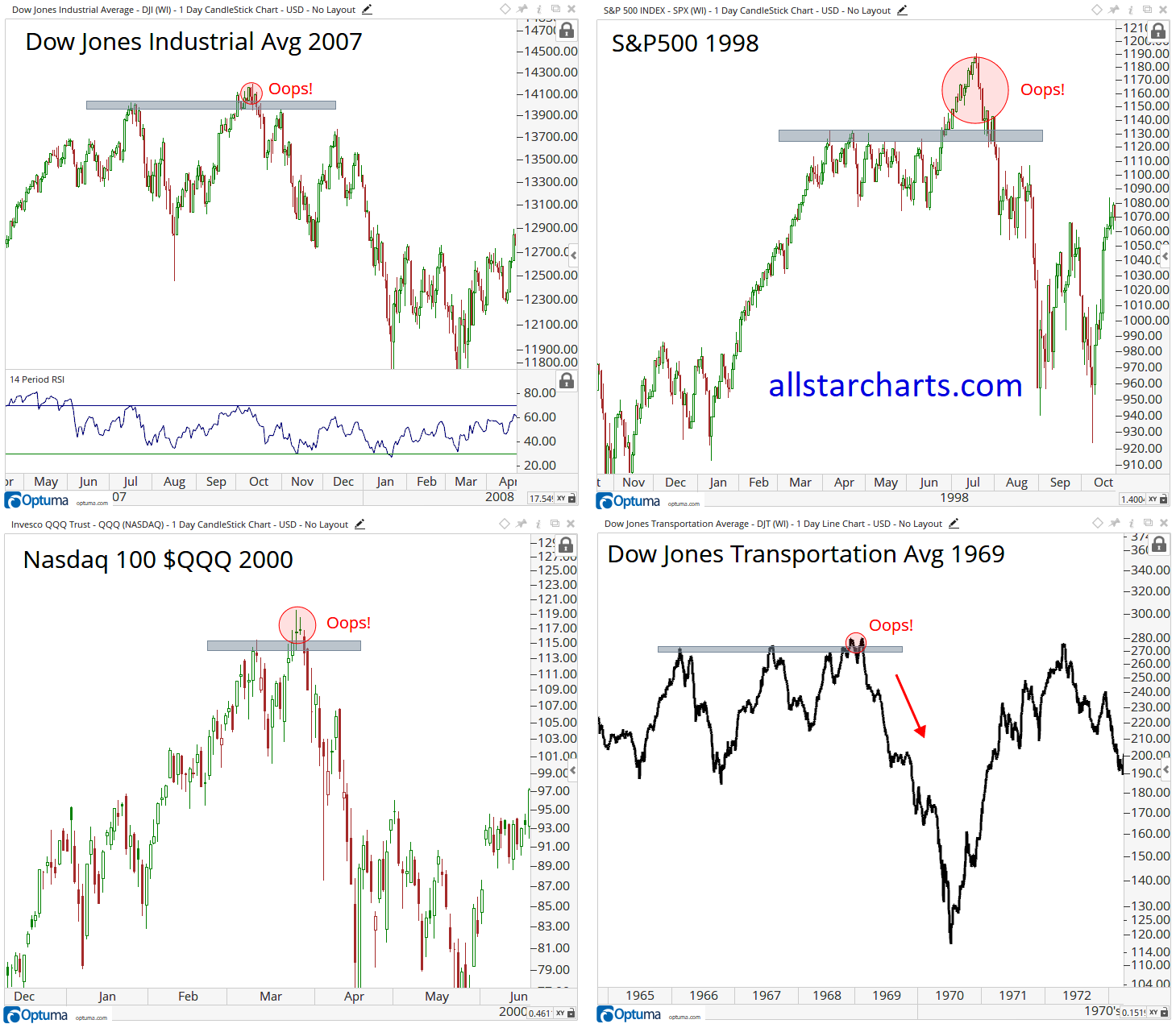 There was a reason we’ve been pressing to our Premium Members that 2875 is the line in the sand in the S&P500. A neutral approach to stocks below that level has been and still is essential. Anything else is irresponsible in my opinion. This 2875 was the January high and would present an epic failed breakout. It was all outlined 2 weeks ago, before any of this started. The same neutral approach to small-caps was in order once $IWM broke 169. It was the first one to go and they got destroyed from there. We’ve unlocked that premium post so you can go back and read it for educational purposes. I encourage you to give it a read so you can see exactly what we were thinking and when. It will most definitely happen again in the future. This is how we always approach the markets. Learning all the time from both our successes and failures.

Here is that S&P500 2875 level failing to hold. This is From Failed Moves Come Fast Moves Exhibit A: 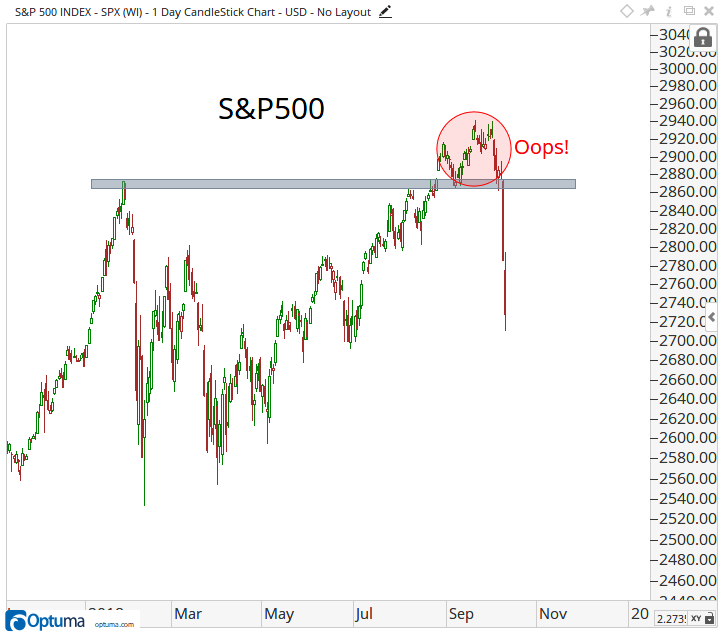 You can see the exact same thing in the Dow Jones Industrial Average. These are not bullish setups. Far from it: 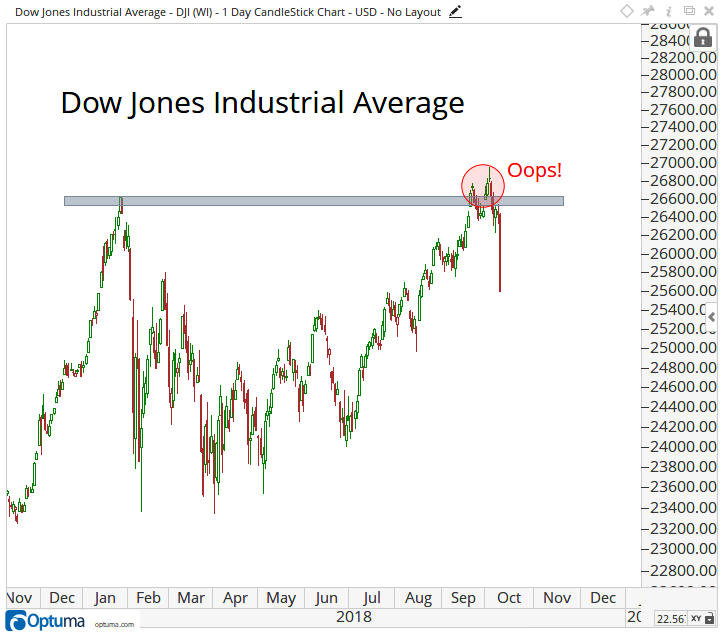 The problem for bulls now is that those were “support” levels. That makes them now “resistance” levels. That means there are bag holders up there ready to unload to you at any opportunity. This is that “overhead supply” that you hear me talk about. It’s just that for a while, there has not been much overhead supply in anything. Most of the stocks we did the best with the past few years had been making all-time highs. We haven’t wanted to mess around, just buy the best of the best.

We’re no longer in that environment. I think heavy cash positions are still best. I just really think we can be patient and open to all possibilities. Remember, it’s not that it’s different this time, it’s different every time. I’ve been down this road before. You’ll see all sorts of statistics about how it’s the biggest this, or longest that, or highest this….Ignore it. In many cases they’re so desperate for attention that they’ll even quote the actual points instead of percent changes. Those you know have that worst intentions of them all.

You’ll see asset managers and financial advisors ride this all the way down as low as it goes. Many don’t have a plan. Kudos to you who do, and I know many that do. We have a lot of Financial Advisors who rely on our research and have done very well. I know for a fact they have incorporated our risk management measures over the past 2 weeks because they’ve emailed and told me! We’re all in this together. It’s a regime change, not just for the market but for other “types of people” out there.

The Gold bugs are likely to have their turn. We’ve been bullish this group since last month and I still think they’re going higher. Commercial Hedgers have on their most bullish position in Precious Metals of all time. You can fight that one if you’d like and buy stocks instead. My bet is that metals keep outperforming moving forward. Commodities in general probably. I like the recent relative strength in Energy as well. The difference is that if stocks become a shit storm, Oil will probably get hit too and Gold won’t. That’s how I see it and the added risk in Oil. But for the most part, I think Commodities rule here.

Interest Rates are going higher. You’re seeing higher commodities pricing that in. I think both of these continue. The risk with the rates story is once again the possibility of that shit storm mentioned above. If that does happen, and I’m not saying it will, then bonds should get a flight to safety bid. Rates will fall in that type of environment. I’m really interested in seeing how this plays out because I still think we need to be bearish Treasury Bonds. It’s been working all year.

Speaking of safety, part of the picture I tried to paint last month of what a bearish environment for stocks would look like involved Yen strength. Forget Gold and Bonds, money goes to Yen when it’s scared. Look how Yen is up every day since the Dow peaked last Thursday. If you want to know how bad things are going to get for Stocks, I think strength in Yen is the tell: 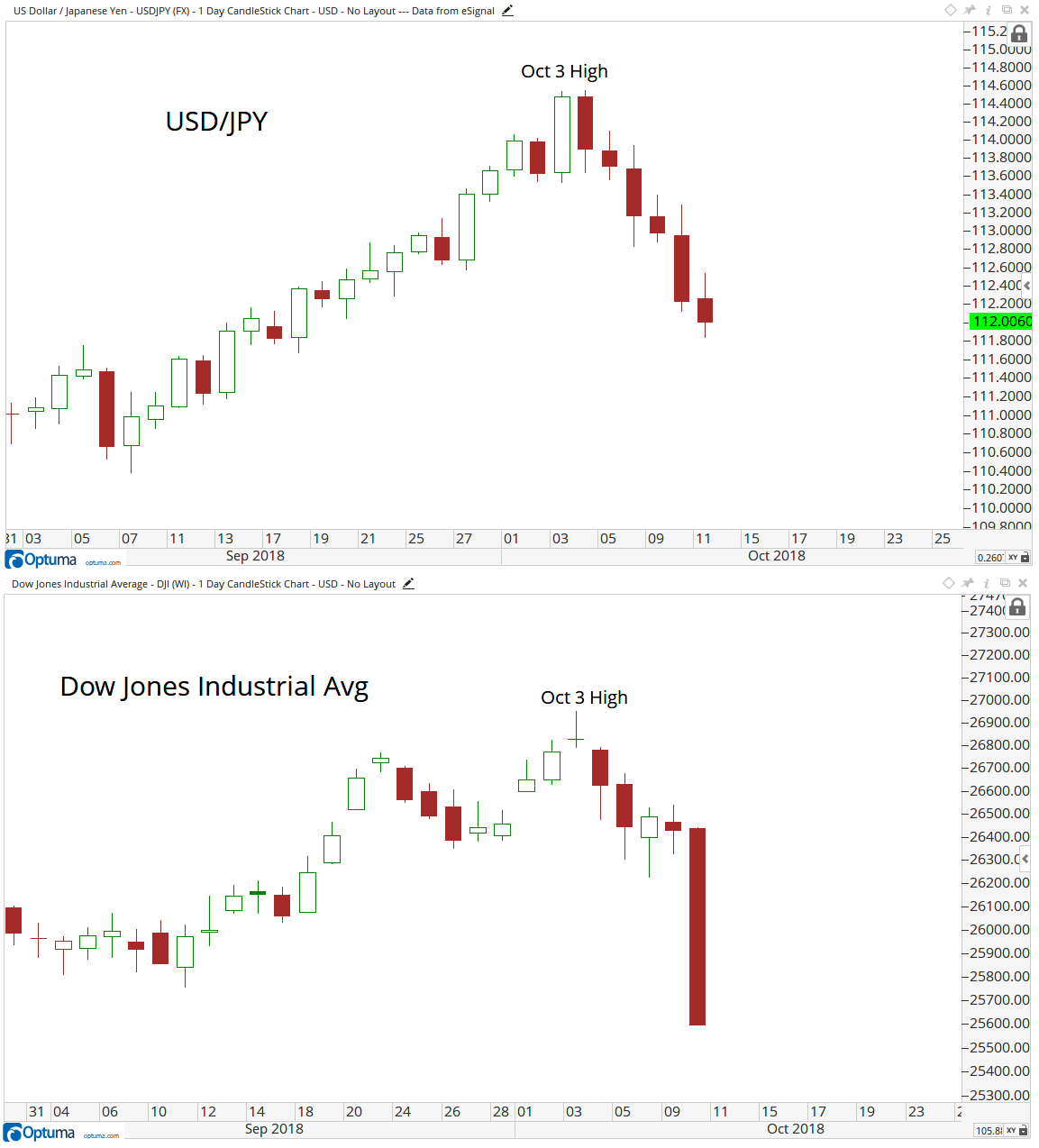 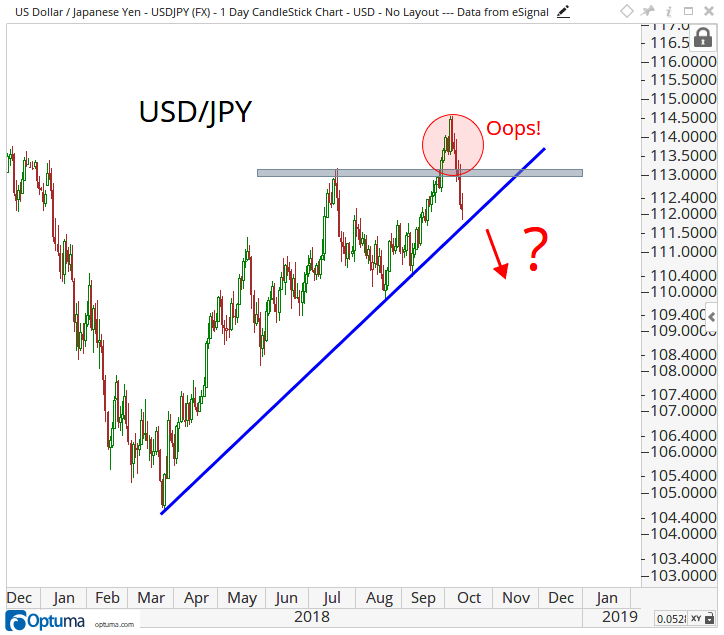 I would say that a break below 111.50 and holding below that in USD/JPY, meaning a Yen breakout, would signal that there is much more risk out there than people are expecting right now.

What does this mean from a trading perspective? Well, I think we’re going to have rallies and we’re going to get sell-offs. We’re going to have some of the greatest rallies of all-time, especially if we get a lot more downside in price. If it’s just a sideways grind for 6-12 months, then those counter-trend rallies will be less explosive. It’s funny, as I’m writing this I’m thinking back about some of those epic days in the Fall of 2008. I’ll never forget it. Those were some great lessons for sure.

So what else should we expect in this environment? Longs and shorts. More Gold exposure. We’ll see about bonds, I’d like to see how that one plays out. What’s curious is the euro strength we’ve seen. You would think the US Dollar would be more of a safe haven, like it was in 2008-2009. You see? Not every cycle is the same.

Dollar falling and Euro rallying is clearly having no impact on US Stocks and instead has been positive for precious metals and gold and silver stocks. I don’t see any reason not to expect those trends to continue, along with lower for longer for stocks.

I’m probably going to be just as obnoxious. I don’t think I’ll be any more aggressive that usual, probably about the same. I’m always going to tell you how it is, whether it’s what you want to hear or not. I’m not here to tell you bed time stories about the fed or trump or whatever the gossip du jour might be. We’re going to analyze the behavior of the market every day and make the best choices we can based on the weight-of-the-evidence. This is in up markets, down markets or sideways markets.

The one promise I will make it you as that I’m going to give it to you straight.

So what if I’m wrong? What if last week was not the high for this cycle? Could that even be possible? Yes, it is entirely possible. Anything is. As I’ve mentioned before, nothing in this market will ever surprise me again. I’ve seen too much. But that’s the bet we’ve made. And I’m confident that we’re not just going to bounce back here and pretend like nothing ever happened. It would have to take S&Ps back above 2875 and Dow above 26,600 to invalidate any of these bearish implications, and I don’t believe that’s the smart bet to be making. This is going to most likely take time to repair and/or price, as I mentioned 1987 before. That would be my preference, but I don’t get any say around here.

Let me know what you think?