We’ve had a heck of a run in stocks since the summer, and now I think it’s time for a break, at least at the index level. Remember, regardless of overall market conditions there will still always be some stocks going up and some going down. In fact, I think Utilities see some outperformance here and I listed which stocks we want to own. So far they’re working.

Anyway, so why the new defensive position? Well, the things we said needed to happen for us to pull back are starting to happen. It’s really as simple as that.

Let’s get into it:

Ok, so where have we been? Well, being out of stocks the past few years and in bonds instead has been a terrible idea. Anyone calling stock market tops or new bear markets or impending crashes has been embarrassingly wrong. We’ve all gotten a good laugh at their expense.

Here are the total return numbers since last time Treasury Bonds were near these levels in 2016. Owning bonds has been a poor choice: 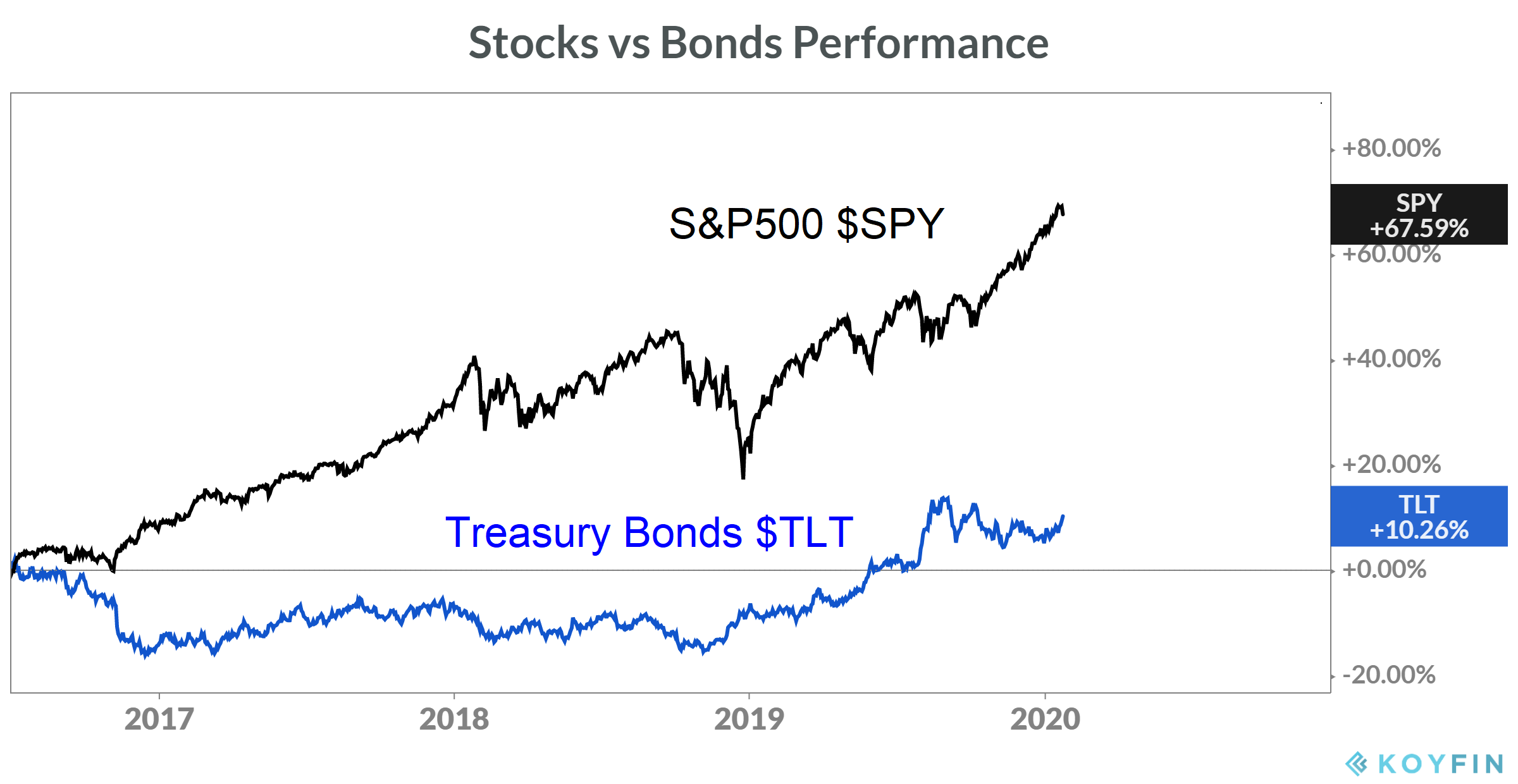 But that was then and this is now right? So now what?

Well, this chart really gets my attention. We’re comparing Bonds to the Nasdaq, which represents the strongest area of the U.S. Stock Market. We are right back to EXACTLY where we got bearish equities heading into Q4 of 2018. With a bullish momentum divergence at these lows, and very clear former support, this is a chart we want to buy all day. This points to buying bonds and selling stocks:

You guys know that I always point to other asset classes because if one asset is in a strong uptrend, it doesn’t just do well on an absolute basis, but it also outperforms its alternatives. In my opinion, the chart above points to Bonds outpacing stocks moving forward. In this chart below, I believe it points to bonds outpacing gold moving forward as well:

If we’re above those late 2017 lows, which as you can see has been an important level for over a decade, we want to err on bonds outperforming Gold.

To be clear, a break to new lows in both of these charts above (TLT/QQQ & TLT/GLD) will invalidate this thesis completely. But I believe that is a very low probability outcome and both of these are heading higher.

Here is the Bonds ETF that tracks the benchmark the closest. The more times a level is tested, the higher the likelihood that it breaks right? Well, it looks like a multi-year breakout is coming here:

You can see Municipal Bonds breaking out already. We want to own $MUB if we’re above 114 with a target above 122:

And if the bond funds are breaking out, then yields are resolving lower right?

Where I grew up, triple bottoms don’t exist. A break below the 2012 and 2016 lows could send rates plummeting, which of course is bullish for Bonds:

Here is the 30-yr Yield breaking already breaking those lows after failing to hold back above it. This is not the type of chart I want to be buying. It’s one I want to be selling:

Remember I said how the Small-cap vs Large-cap ratio was an interest rate story? Well, it still is and is pointing to lower rates:

When looking at our most reliable ratios for interest rates, they are breaking down as well. Look at the Regional Banks vs REITs ratio and look at the Copper / Gold ratio. Both breaking:

This would be a logical time and place for Bonds to get going. The S&P500 just hit our tactical upside target this week. A consolidation here would be perfectly normal. We want to maintain a neutral stance towards US equities if we’re below the January highs. This digestion of gains can come through time, or through a downside price correction. We’ll be watching closely, but I think it’s one of those two for now:

We can say the same thing globally. The Global 100 Index just hit our upside objective as well. A neutral position if we’re below this 55 area is best for now:

Meanwhile, we don’t have bull markets in America without Financials. Here is the S&P Financials Index still stuck below those epic 2007 highs. I zoomed in so you can see exactly what kind of brick wall we just ran into. If we’re below those 2007 highs, a neutral position in Financials is best:

The Japanese Yen tends to spike with Bonds when we are in a “risk-off” environment. If we’re right on Bonds, then Yen is likely to rip higher as well. And I think the charts are set up for a Yen squeeze here. If we’re below 110 in $USDJPY, we want to be short with a target under 105, for now, and ultimately maybe 100. 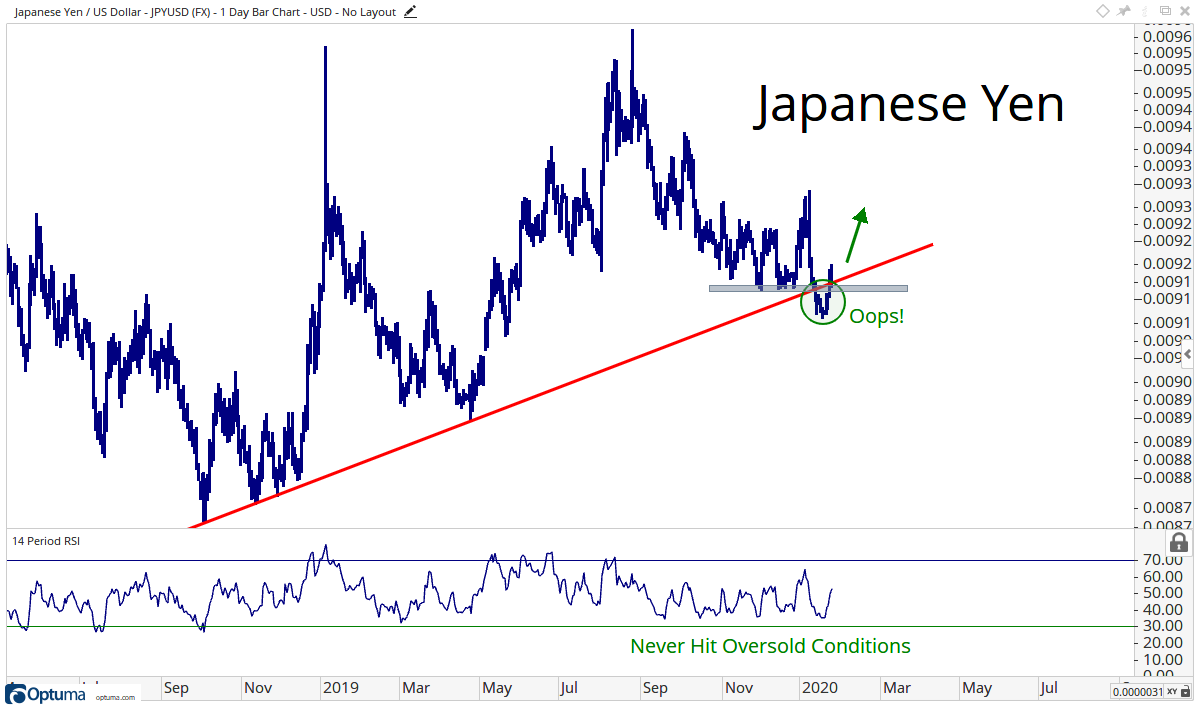 If stocks are selling off, it will put a real damper on that whole “rotation into emerging markets” story. A rising dollar makes perfect sense in that environment. We went into detail last week, check it out. But if we’re above 98 in the US Dollar Index, we want to be betting on a rising Dollar:

We’ve wanted to be sellers of bonds since the end of the summer. Now we want to be buyers: 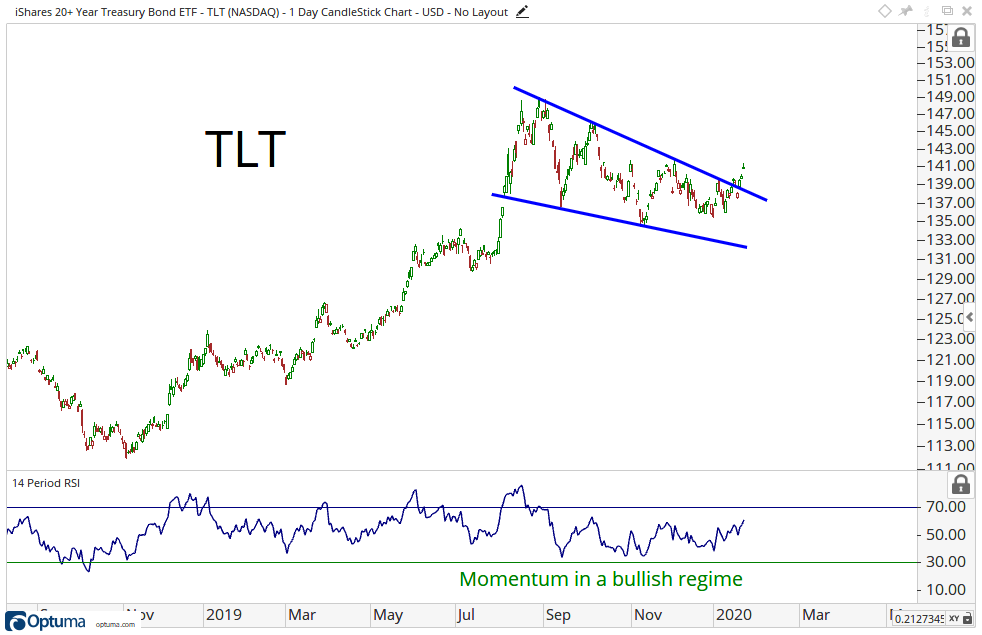 Do I have this right?

Let me know what you think.