Palladium. For the last 3 years, nobody cared a lick as it nearly quadrupled in price. Over the last month however, I’d seen more mentions* as the price trend accelerated than I did for the entire 3-year trend beforehand.

Last night before bed, I saw a Bloomberg headline about a Crypto Token backed by Palladium and I facetiously tweeted that the metaphorical bell at the top had been rung. My point here was that sentiment was getting pretty loud at what I see as the exact wrong time. 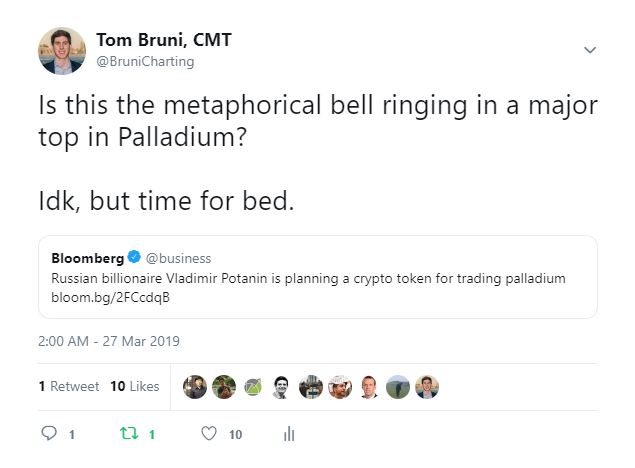 Ironically, I woke up to it trading down more than 6%.

A decent read on the market? Maybe. Lucky timing? Most definitely.

That brings us to the chart I want to focus on today. A daily chart of Palladium, which confirmed a bearish momentum divergence and a failed breakout above its early March highs. With prices still well off their 200-day moving average, there’s plenty of room for downside mean reversion.

What I want to focus on here is not that we want to be short Palladium right now, but instead that this is a great example of waiting for price confirmation before acting on divergences.

If we look at the trend since last October when the first momentum divergence formed, it was still a strong uptrend and prices rallied 45% in the face of that divergence. Divergences need price confirmation before we can act on them. Price pays, everything else is ONLY a supplement.

Now that the Palladium gravy train has stalled, we’re shifting my attention to a Precious Metals pairs trade that we’ve been stalking for months.

That trade is long Platinum and short Palladium, which is working to confirm a failed breakdown below its 2001 lows and a bullish momentum divergence. While we still need to wait for a weekly close above 0.559, it looks like we may get it in the next two days.

Palladium has been a great, multi-year trade for us, but now we need to be patient and allow prices to work off this big “oopsie”. How that plays out is anyone’s guess, but it’s not our problem anymore.

We’re moving on, but not for good. We’ll be back if/when conditions improve again and offer a skewed reward/risk setup that’s in our favor.

If you enjoyed this and want access to all our premium content, start you 30-day risk-free trial or sign up for our “Free Chart of the Week” to receive more free research like this.

Thanks for reading and let us know if you have any questions!