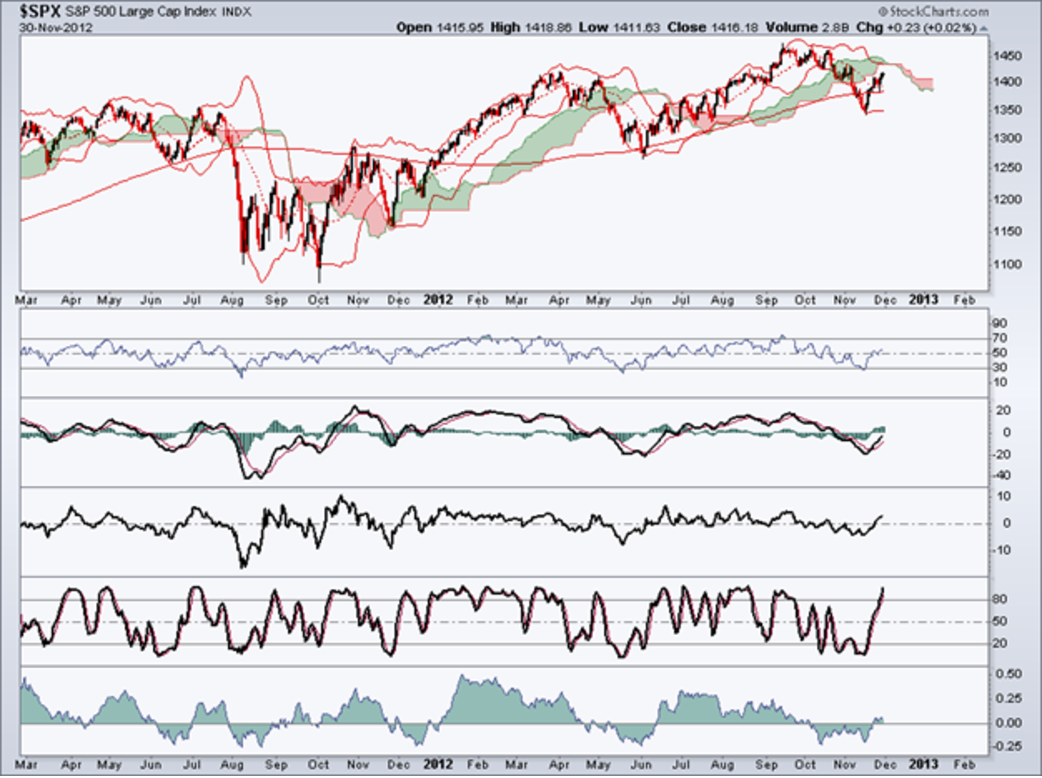 Also, when I say “Period”, I am referring to all timeframes. So if I am analyzing a daily chart, we are using a 14-Day RSI. If we are looking at the weekly chart, we are using a 14-Week RSI. Markets are fractal, meaning that supply and demand behaves the same way regardless of your time frame. In fact, contrary to popular belief, supply and demand dynamics get more reliable the larger the time frame you are observing.

Buy Side Institutions look for 2 things: Momentum and Relative Strength. We want to put ourselves in the shoes of a Fund Manager looking to allocate Billions of Dollars in assets on Monday morning. He can’t sit there waiting for something to move. There is too much opportunity cost involved. We want to approach the marketplace with that same mentality. 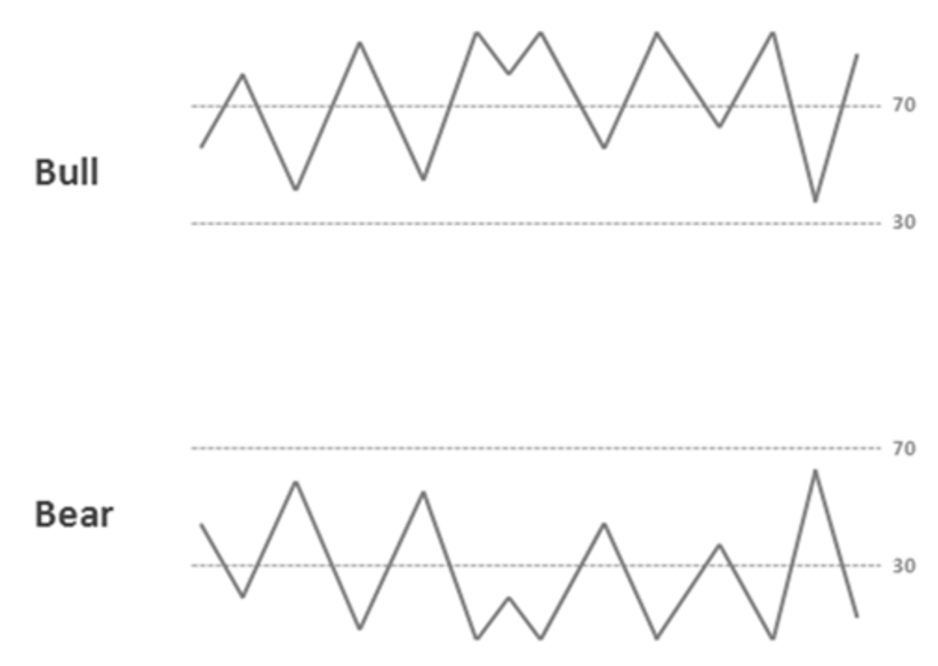 Here is a good example of Gold prices during 2009-2011. RSI remained in a Bullish Range the entire time. It wasn’t until momentum started getting oversold in late 2011 that it was clear something was wrong. And as it turns out, gold prices immediately fell another 30%. So momentum was not only an indicator of strength throughout 2009-2011 but also as a sign of weakness over the next several years. 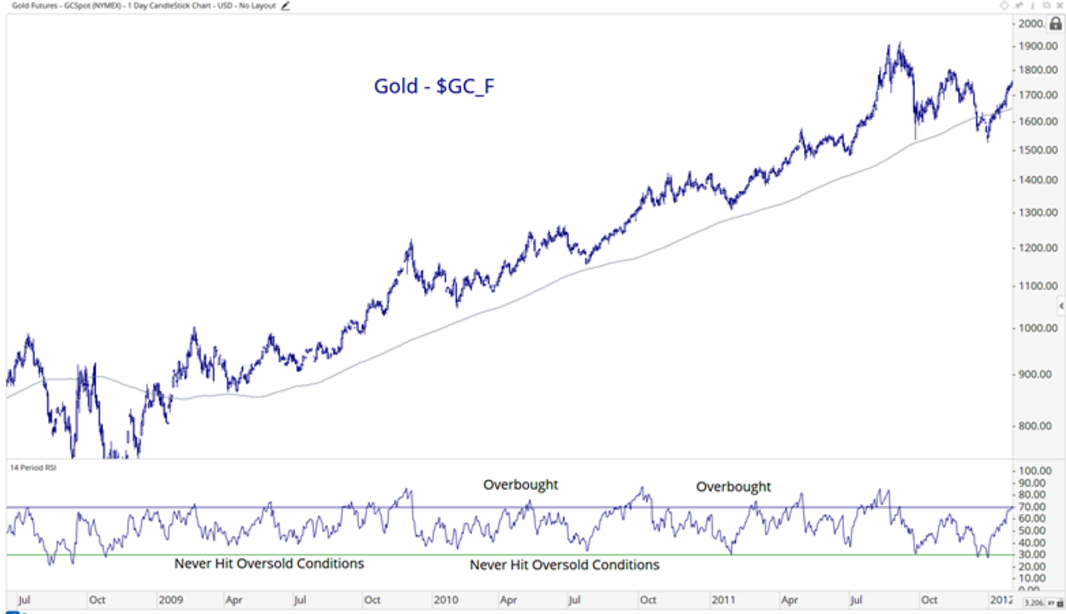 This is a chart of Tesla during 2012 as it set up for its explosive 400% move higher. Notice how during this entire consolidation in 2012 momentum never hit oversold conditions. Then as it started to get overbought confirming the new uptrend, you got the breakout: 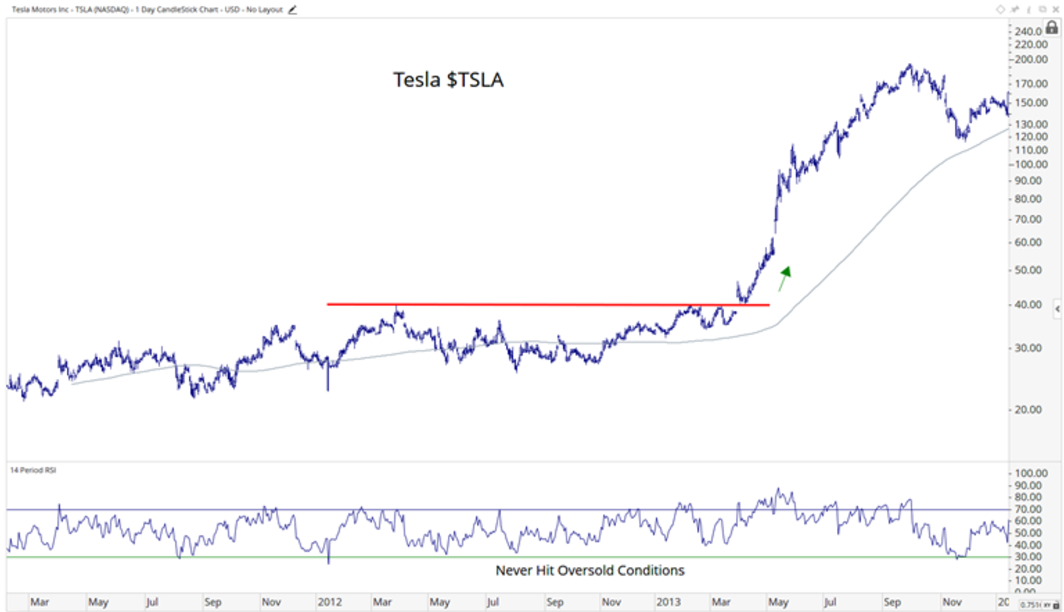 Here is a good example of JP Morgan $JPM during 2008 when prices were falling and momentum was in a Bearish Range: 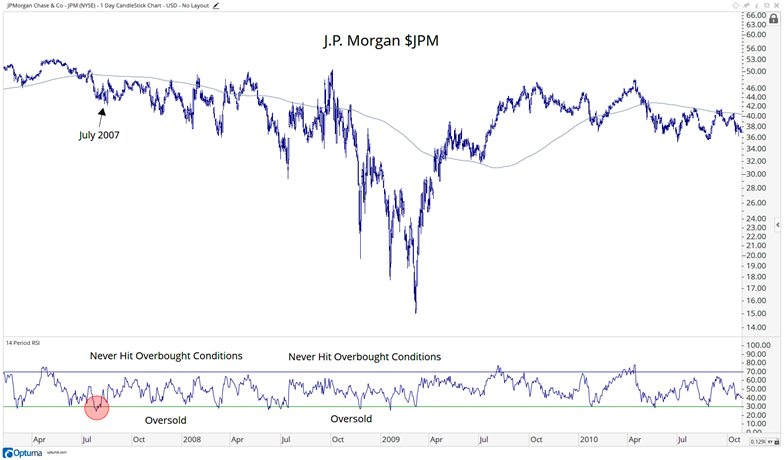 Here is a ratio chart of emerging markets vs the S&P500. When looking at price, this is obviously in a clear downtrend defined by lower lows and lower highs. Look at momentum staying out of overbought conditions but consistently getting oversold on selloffs. 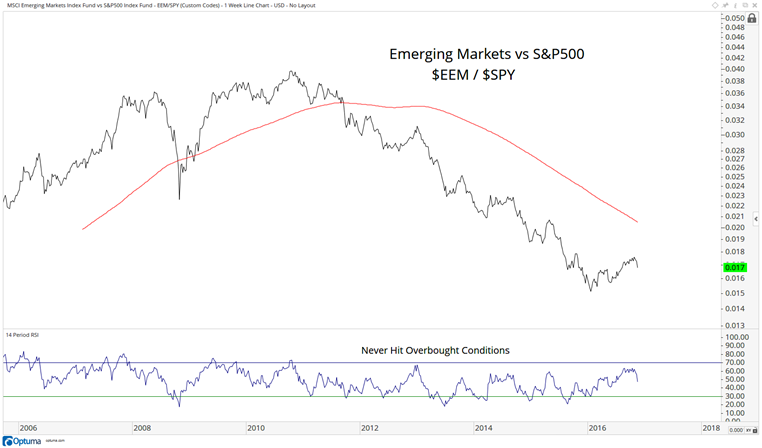 Nothing is perfect and neither is this. Sometimes you will see markets hitting oversold conditions on a sell-off and then it reaches overbought conditions on the ensuing rally. These mixed signals generally signal a lack of trend. Identifying lack of trends is helpful too and saves us some headaches. 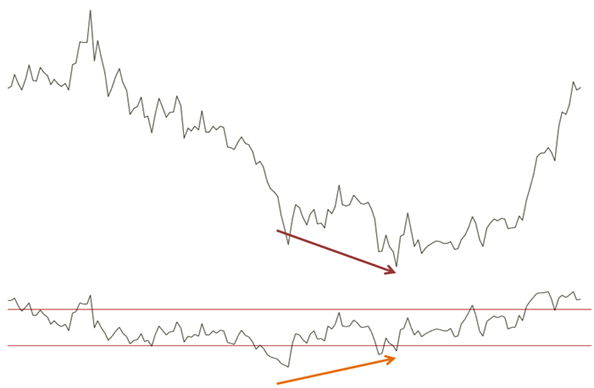 Here is a good example of Silver in 2012 putting in a Bullish Divergence. Notice how at first, it just signaled a change in trend, from down to sideways, and ultimately it reversed higher: 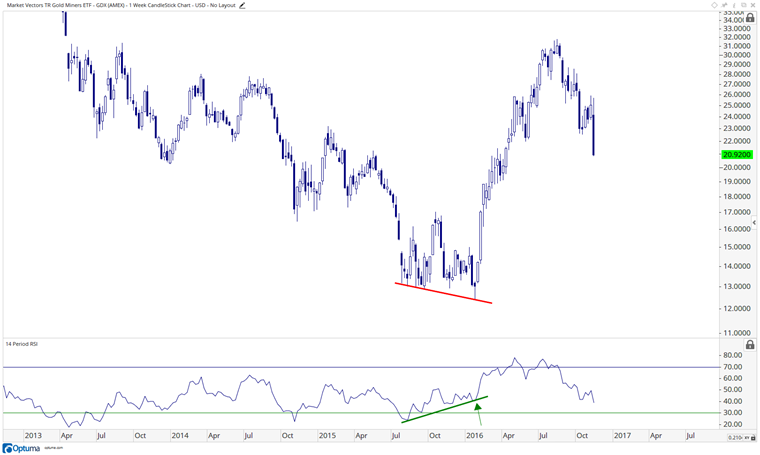 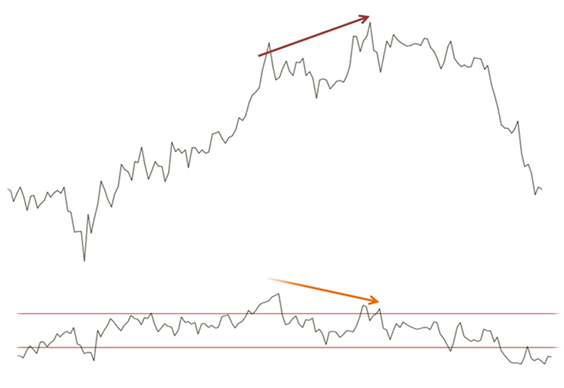 Here is a good example of the U.S. Dollar Index early in 2009 putting in a higher high in price while momentum put in a lower high. Down we went after that: 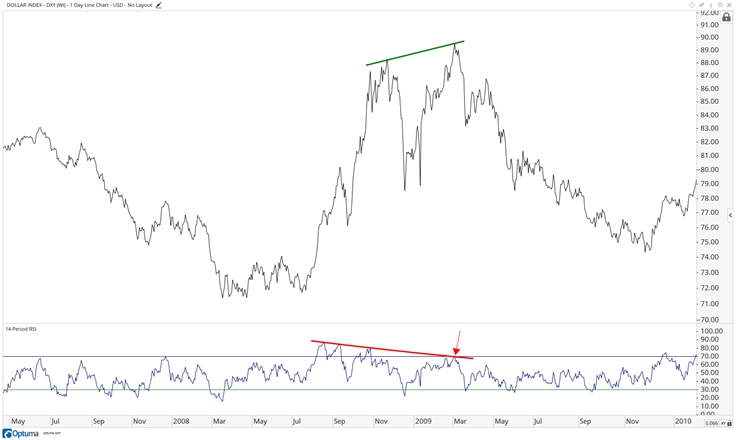 The idea here is to use them in conjunction with other technical tools. In this case, we’re looking at a bearish momentum divergence near former resistance levels. We can take it one step further and use our correlation analysis to see that at the time, the US Dollar Index and S&P500 had a very high negative correlation. Catching this US Dollar bearish divergence would have signaled to buy US Stocks, and specifically the S&P500, in this case: 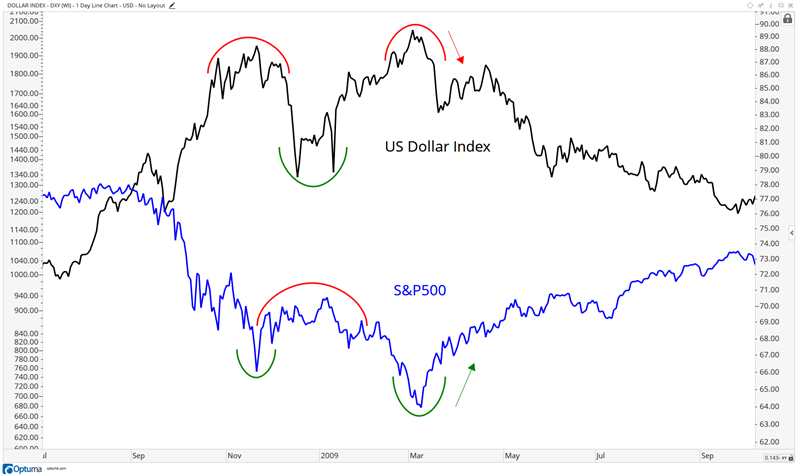 Apple in 2012 is a great example of both timeframes coming together:

I was very vocal about these divergences in Apple at the time. And it wasn’t hard to spot, they all happened at the same time. First, here is the weekly chart of Apple putting in new highs in the second half of 2012, and momentum diverged negatively on those highs. Then when prices broke the uptrend line to confirm, there was no reason to be involved from the long side. Also, notice how momentum started to hit oversold conditions to confirm the bearish trend in place. 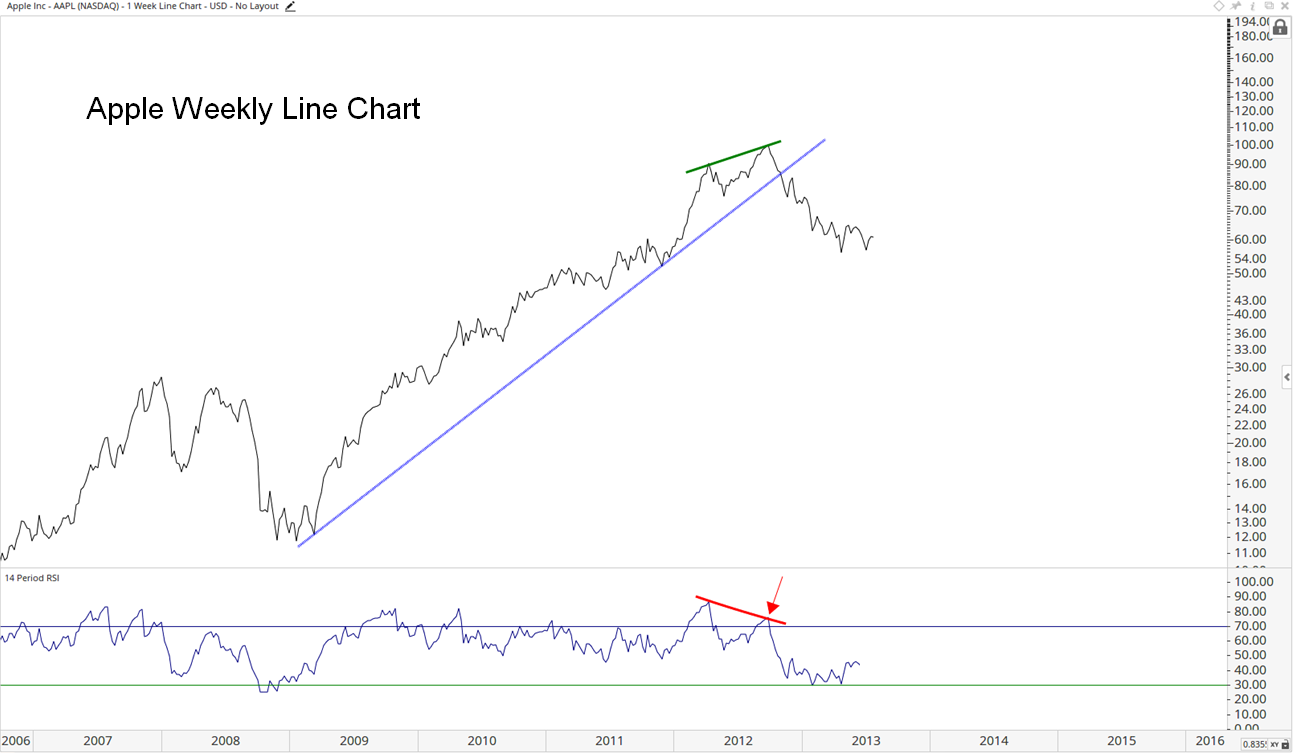 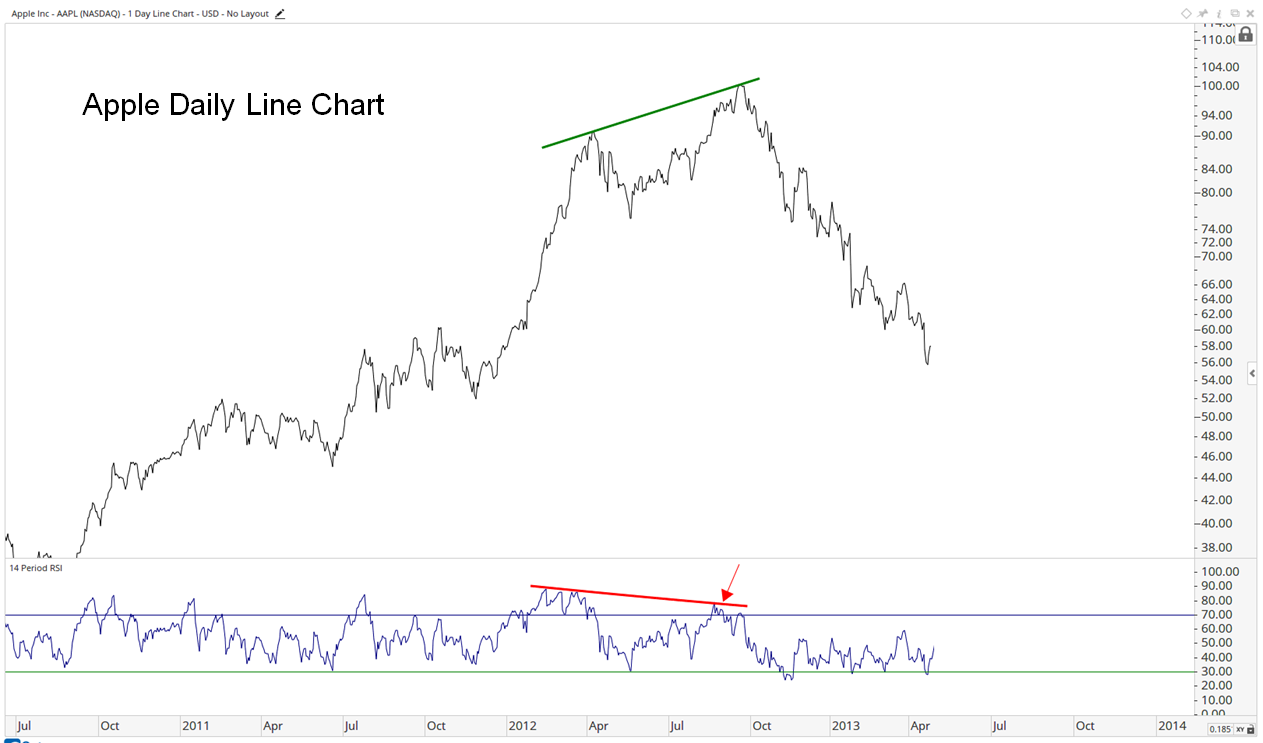 To take things one step further, here is Apple relative to the S&P500, which represents the relative strength of Apple in 2012. The relative strength chart also made a new high in late Summer only to put in a bearish divergence, just like what was taking place in the absolute price charts of AAPL. 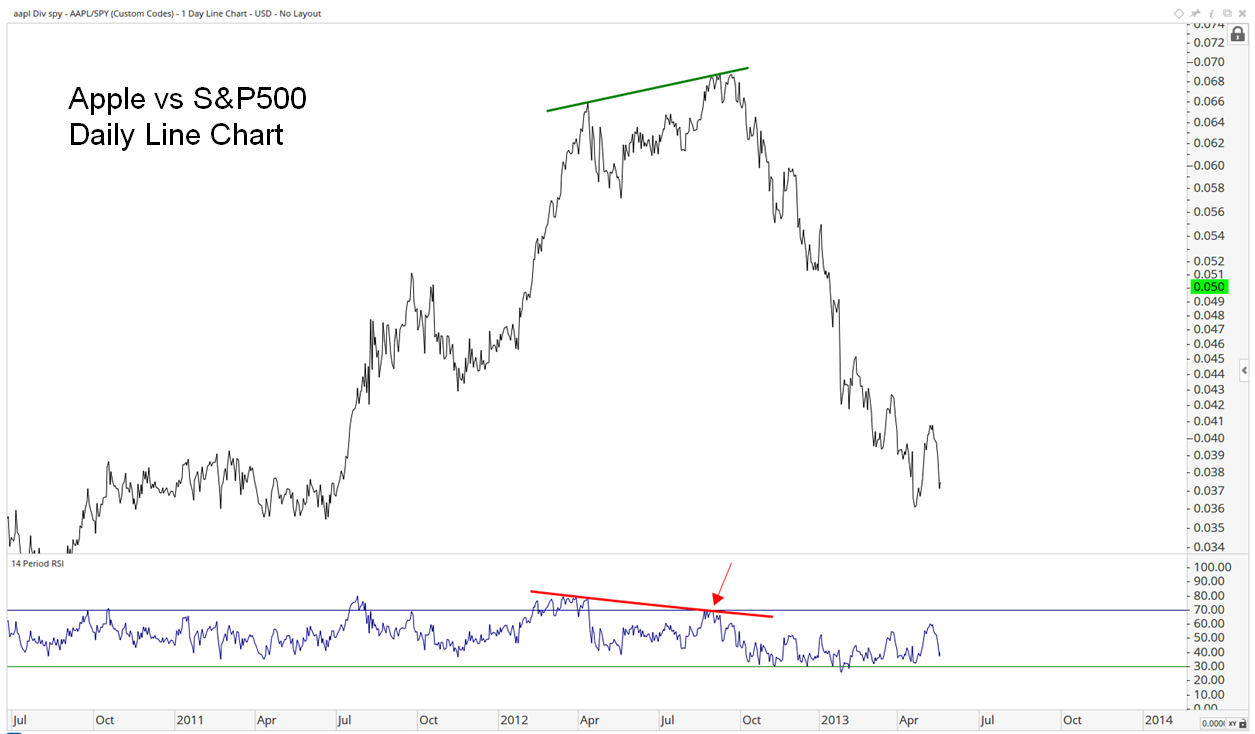