The S&P500 and Nasdaq Composite broke through some pretty serious resistance this week. Downtrend lines from the springs/summer highs have been penetrated in both indexes and the most recent highs from late October are now below current prices. In other words, not only has the series of lower highs come to and end, but the pattern of higher lows and higher highs that began in early October is now the most dominant trend.

What I think is important to realize here is that this rally in US Equities has come while the Euro has been under pressure. As US Stocks are making higher highs, the Euro has been making lower lows against the US Dollar. We noted last week that this positive correlation between the Euro and Stocks has its ups and downs as well, but that it eventually reverts to trending back together. 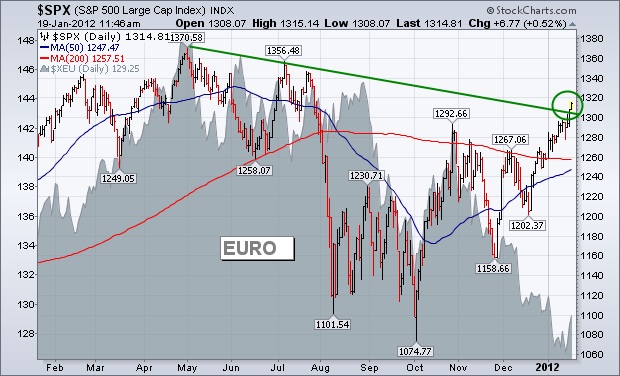 This chart was put together by my favorite Intermarket Analyst, John Murphy, where he shows the S&P500 breaking key resistance while the Euro was making new lows. He writes in the post:

The fact that both indexes have been able to rise in the face of a rising dollar (falling Euro) is also impressive (see gray area in Figure 1). That raises a number of intermarket possibilities. One is that the market’s “inverse” relationship to the dollar is changing. Another possibility is that the dollar rally is nearing an end (and the Euro is starting to bounce). Another possibility is that Euro weakness is making the dollar look stronger than it really is. One way to determine that is to look at the performance of other foreign currencies which are acting much better than the Euro.

I’m going to go with possibilities 2 & 3. First of all I don’t see evidence yet that the long-term positive correlation has changed between US stocks and the Euro. I do, however, see signs that a Euro is starting a serious bounce and the Dollar rally is ending (see here). And I agree, that the Euro weakness has made the dollar look more attractive because it is by far the largest component of the dollar index. I have to believe that the stubborn and resilient behavior seen in US Stocks in the face of a falling Euro is bullish.

On the flip side, you can make the argument that currency traders are warning that stocks are wrong here and should roll over soon to play catch-up. I personally don’t buy that argument for the simple reason that stocks are behaving the way they should in a bull market in their own right. We are seeing leadership from the right sectors, relative weakness from those we should expect it from, and key levels (as mentioned above) are being penetrated in the major averages. I think that a bounce in the Euro here could only help the risk-on trade going forward.

And not to get too off topic, but the US Treasury Bond market is looking awfully vulnerable. I’ve been looking for a breakdown in Treasuries for a month now, but $TLT has continued to consolidate sideways, making this an even bigger (and potentially more devastating) topping formation.

Bottom line: All of this intermarket work tells me that the outlook for US Stocks should remain positive.