Do you know anyone that thinks the Euro is going higher against the Dollar?

Seriously. I can’t think of one.

The gossip around my neck of the woods is all about the end of the US Stocks and Euro’s positive correlation. Stocks are making new highs and the Euro is making new lows. Is this new negative correlation here to stay? Maybe. But remember that fluctuations in correlations are nothing new. Correlations have ups and downs just like asset prices. Look at the volatility in the correlation coefficient between the S&P500 and the Euro over the last couple of years. Is the action we’ve seen lately anything that we haven’t seen before? 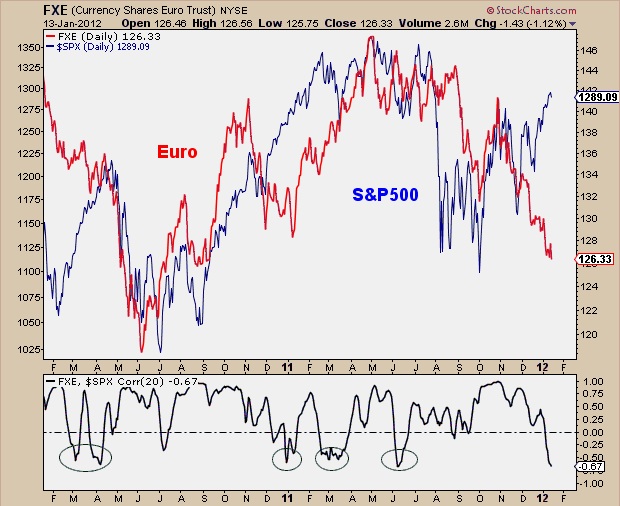 The higher the Correlation Coefficient is above zero, the stronger the positive correlation. When it’s below zero, the two assets become negatively correlated and would typically trade in opposite directions on any given day. The negative correlation between the S&P500 and US Treasury Bonds is much more consistent. But as you can see in this chart, there is still some volatility there too.

THE CROWD HATES THE EURO. Why not, right? If you were a crowd, wouldn’t you find something to dislike about a structurally flawed currency like that, whose member states are having their credit limits trimmed?

Still, at certain points in time, even a crowd acting on a solid rationale gets penalized by the markets for an excess of conviction. Jeff deGraaf of Renaissance Macro Research points out that “sentiment on the euro has turned downright ugly,” with the percentage of bulls in the Consensus Inc. polls near 15%, around the lows last seen in late 2008. The flip side is the abundance of bullishness on the dollar, evident in the exposure to long dollar positions tracked by www.CarpenterAnalytix.com, which last week was higher than 96% of all weeks in the past five years.

In deGraaf’s view, one under-explored possibility is that fracturing of the euro zone results in some peripheral members leaving, and that “starts to turn the euro more into the Deutschemark, and proves more bullish than bearish” for the currency. This is educated conjecture right now, but deGraaf is correct in saying “this could be a big surprise for 2012.”

Jeff deGraaf is a Chartered Market Technician and founder of Renaissance Macro Research, LLC. He has been ranked by Institutional Investor magazine for the last 10 years, and ranked as the #1 technical analyst over the last six years.