Bear Markets are environments where a majority of stocks are falling in price for a prolonged period of time.

The number 20 is a completely arbitrary number that has absolutely no meaning. Thinking it does is foolish. Why 20? Why not 19.5? or 20.2?

There is no reason. They’re just lies.

If you ever hear anyone say that, “A bear market is when it falls 20%”, you know it’s because they’re in the entertainment business, not in the truth business.

Stay away from those kinds of people. They’re not here to help.

It’s their job to distract, it’s our job to ignore.

In reality, expansions in the new low lists are things you’ll find near the beginning of market declines. You’ll see spikes in these lists that haven’t been seen in years.

Here’s what this looks like coming into the week. It’s still a ghost town:

Now, don’t expect to see spikes in the new 52-week low list any time soon. You’ll see the spikes come first in the new 21-day and 63-day low lists (representing a month and a quarter respectively).

To be clear, we have NOT seen this expansion in the new low lists at all. When we do, I’ll be right here talking about it, obviously.

Mathematically, you cannot have bear markets, or prolonged broad market declines, without those expansions in new lows.

So we’ll be watching closely.

In the meantime, however, from a more tactical perspective, I would continue to expect a choppy messy market. Last week we discussed 2 Reasons To Be Bearish Stocks, and those factors have followed through again this week.

As long as Small-caps and Micro-caps are below their February highs, expect a messy market for small-caps.

You can also see this on a relative basis as Small-caps are failing at a key level here vs Mega-caps. This small-cap leadership is unwinding, and it could take a while: 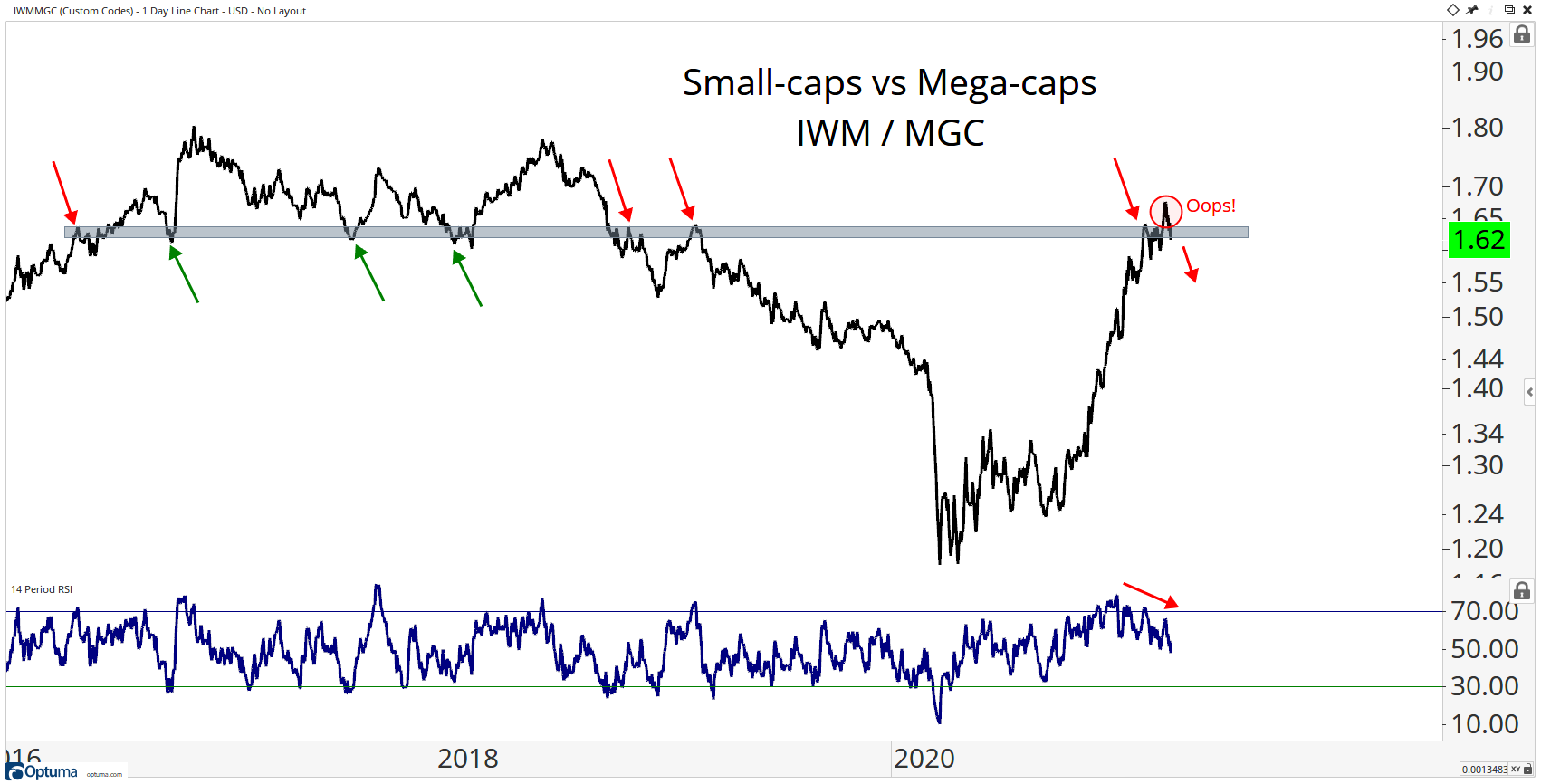 Both Consumer Staples and Utilities are making new relative highs today, which again, is characteristic of a market that is under pressure. See: Rare Diamond Reversal Pattern.

Another thing we’ve mentioned is that when our Bond shorts stop working, that would be another cause for concern.

Well, here we are. Bonds are finding support at exactly where you’d expect, near former resistance levels going back a half-decade. If the 7-10yr Treasury Bond Fund is above 114, we cannot be short bonds, and a long position would actually make more sense: 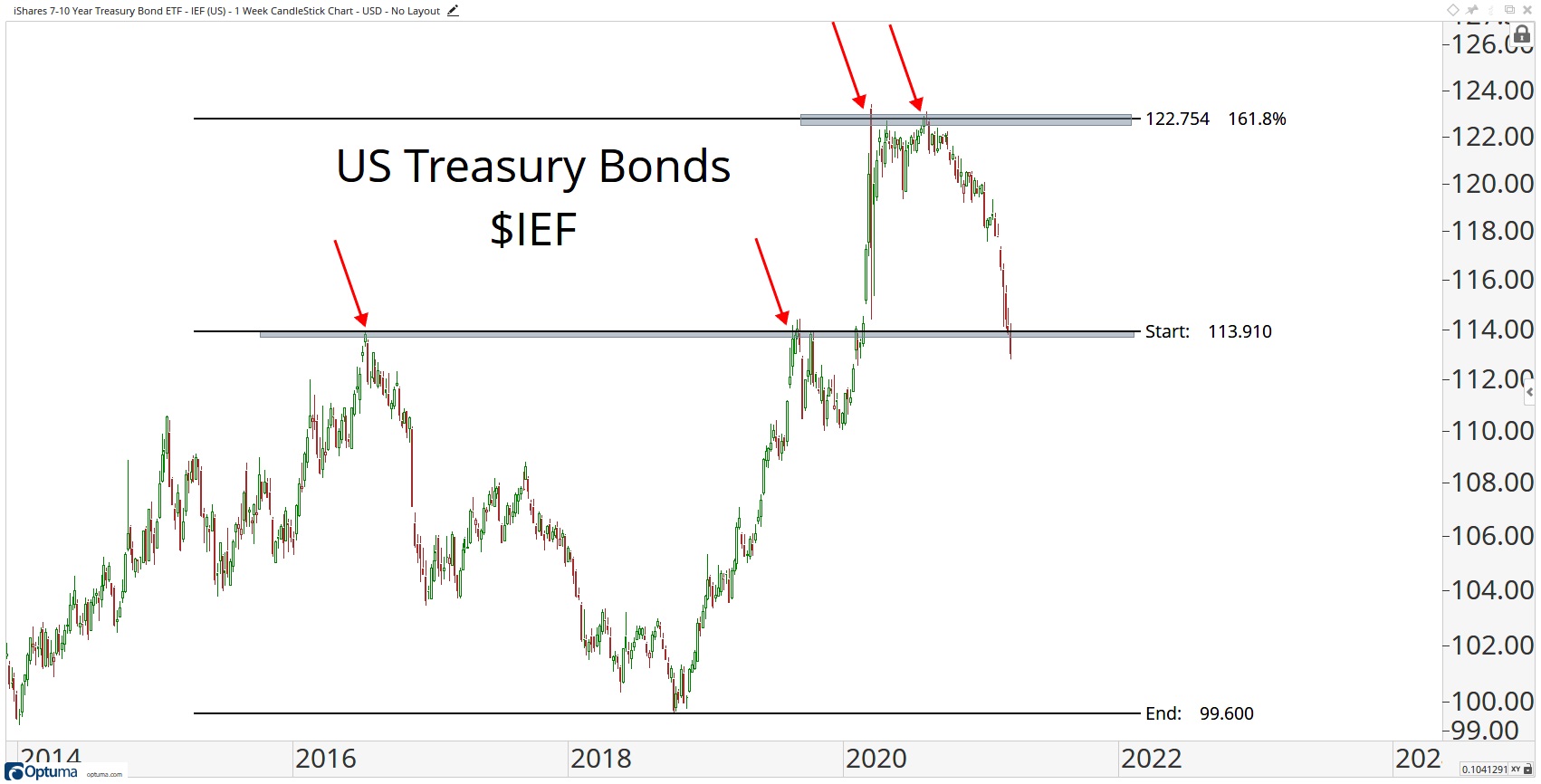 Structurally, has any damage been done to this market? No.

I think the key here is to KNOW YOUR TIMEFRAME.

We’re talking more tactically. It’s a messy market. And as long as these aforementioned levels are intact, the mess is here to stay.

But we cannot make structural bear market conclusions if Financials (XLF) are above their 2007 highs ($31), and more importantly, we don’t have an expansion in stocks falling.

It’s a mess for now.

That’s the environment we’re in.

It’s just what it is.