For a variety of different factors, we’ve wanted to tactically be selling stocks all week and buying bonds instead, particularly US Treasury and Municipal Bonds. The weight of the evidence has been pointing to a more defensive rotation and out of risk assets. We listen to the market and act accordingly. Anything else would be irresponsible.

To be clear, longer-term uptrends in stocks and indexes globally are still intact, so far. Our goals, however, are to make money this quarter. We’ll worry about next year, next year. We’ll worry about the 3rd and 4th quarters when we get there this summer. For now, as we finished up January we’re now entering what is historically the worst of the “Best 6 Months of the year”, which go from November through April. So stocks going down in February would be perfectly in line with seasonal trends.

With that said, the biggest and most important index, arguably, in the United States, and maybe even the world, just achieved its upside objective. Keep in mind that Technology also represents about a quarter of the entire S&P500 Index: 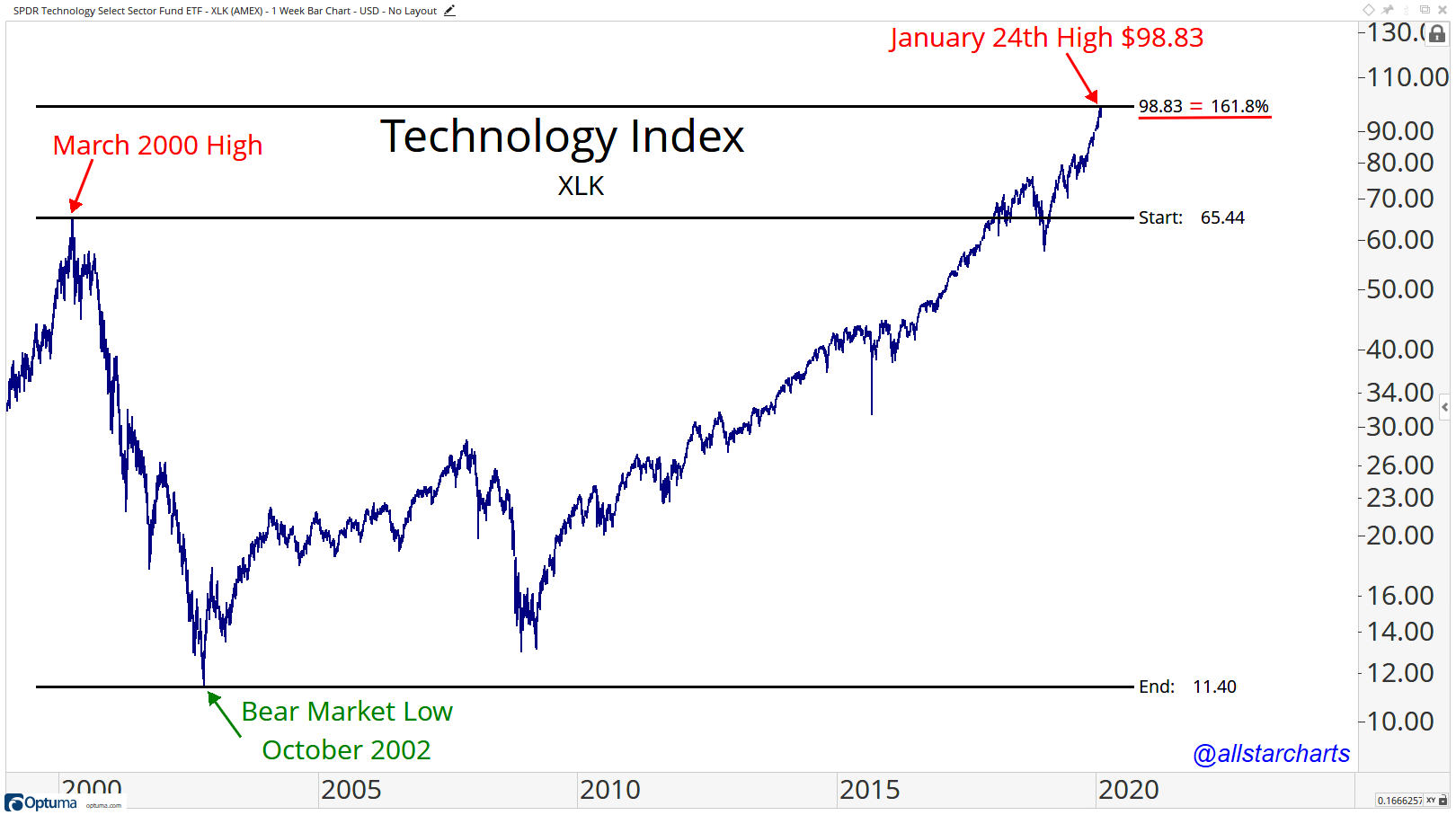 If you’re not familiar with the math and amount of value that Fibonacci bring to us, I encourage you to give this a read. I lay it all out, why, how and when we use it.

Maybe that’s just a coincidence. But many of you have been reading my work for a long long time. You know this is not the first time we see this. In fact, it’s laughable how often it occurs.

There’s one more thing I want to mention that I think is SUPER SUPER important. And it’s that there is no holy grail. This one chart of Tech hitting some target is not THE reason why we’re selling stocks and buying bonds instead. In fact, it’s just one little tiny tiny reason why. It’s just one piece of the massive puzzle we build.

The reason I show you this one, and not one of the other 4,999 charts pointing to the same thing, is because it’s a great example of the way the market behaves. This is what we’re doing here, analyzing the behavior of the markets. I see this stuff constantly. You’ve seen it a bunch too if you’re been reading my work long enough.

So we’re obviously sellers of Tech as long as we’re below the January highs. I don’t know how long it will take. The strongest markets tend to break through these resistance levels and then ultimately they find support on the way back down. This is not what is happening here. So far, this key level is acting as resistance. That’s been proven. So until the demand is able to absorb this supply, Tech is stuck.

You can own it all you want. We’re not going to and I can’t tell anyone to with a straight face. Don’t just think about the money you can lose owning Tech stocks, but how that capital can be better allocated. So it’s the risk of loss of capital as well as the opportunity cost. For me that’s a lot, and frankly too much to be long any Tech for the foreseeable future.

Let’s remember the components here. $AAPL and $MSFT represent almost 40% of this Index. Visa and Mastercard are almost another 10% combined. And don’t forget that companies like Google, Facebook and Amazon are not represented in this Index. Those stocks are in the Communications Index $XLC and Consumer Discretionary $XLY.

Today we’re talking specifically about the downside risk in Tech, as represented by the $XLK.

I’ll have a much more comprehensive note out this week. If you’re not on the list to receive these, you can sign up here.

What are you doing?

Still buying Tech up here? Tell me why I’m wrong and should be long Tech if $XLK is below 98.83