How often does someone tell you to Remember to Buy In November? Probably not as often as you’ll hear Sell in May and Go Away!

But what does this all mean? What are these silly nursery rhymes all about and why should we care? Or should we even care at all?

You’ll hear even some of the smartest and most experience market participants dismiss market seasonality altogether, almost as if they’re too good for it. Maybe they’re scared of things they don’t understand, like my 2 year old cousin gets when she’s confused. Or maybe seasonality is not as intellectually satisfying to them as say something like, fed policy or trump impeachments.

Either way, we do care about seasonal trends at All Star Charts because they help us with both identifying market trends and risk management. Here’s what US Stock Market Seasonality means to me:

First of all, we don’t actually, “Sell on May 1st and Go Away”. That seems foolish. For us it’s important to understand the mathematics and history behind the Best 6 months and the Worst 6 months of the year. Just to put things in perspective, all of the gains in the Dow Jones Industrial Average since 1950 have been earned during the months of November through April. Yes that’s right. So had you bought the Dow on the first trading day in May every year and sold on Halloween, you would actually be down during that period.

The last few years have turned that May through October total now slightly positive, but as you can see in this chart below, the returns have come from November through April. It’s pretty clear. 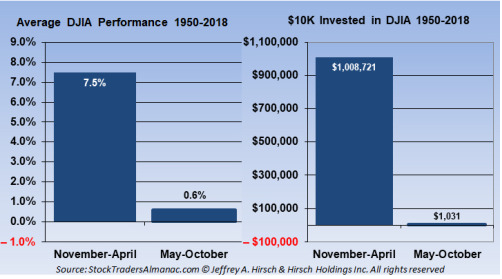 The chart comes from the annual Stock Trader’s Almanac. Had you invested $10,000 in 1950 and only owned the Dow from November through April, today you’d have over made over $1 Million. Had you done the opposite and bought on May 1 and sold on Halloween, you would have made just $1,000. Think about that for a minute and then tell me you would rather ignore these trends.

Historically it pays to buy the dip in October in preparation for “The Best 6 Months”. Here is another chart from the Almanac showing the seasonal pattern for all years since 1901 and then overlaid with just the Pre-Election Years. That October dip is the one we want to buy!

Okay, so that’s what the numbers mean and I would argue they are pretty powerful. Markets change, asset classes change and things evolve. But the one thing that remains constant is human behavior. We behave in different ways in the Summer than we do in late December. We hang out with different people, we go to different places and we wear different clothes. To suggest those behavior patterns don’t work their way into decision making in the market is ignorant, in my opinion. The market is a reflection of human emotions. These patterns can be seen again and again throughout history.

So, what do we do with this data if we’re not actually selling in May and then buying in November?

Well, I think that’s a good question. And I’m going to tell you what we do.

You see, we’re not making portfolio decisions ahead of a change in season. We look after the period is over to see if the market respected or ignored seasonal trends.

Historically, when US Stocks ignore seasonal tendencies, that in and of itself, is the information we’re looking for.

A good example was in 2016. The “Worst 6 Months” were actually not bad at all. As you can see here, stocks did really well. What did that mean? It meant that when stocks were supposed to struggle, they did rallied instead. That underlying strength preceded one of the greatest years in US Stock Market history: 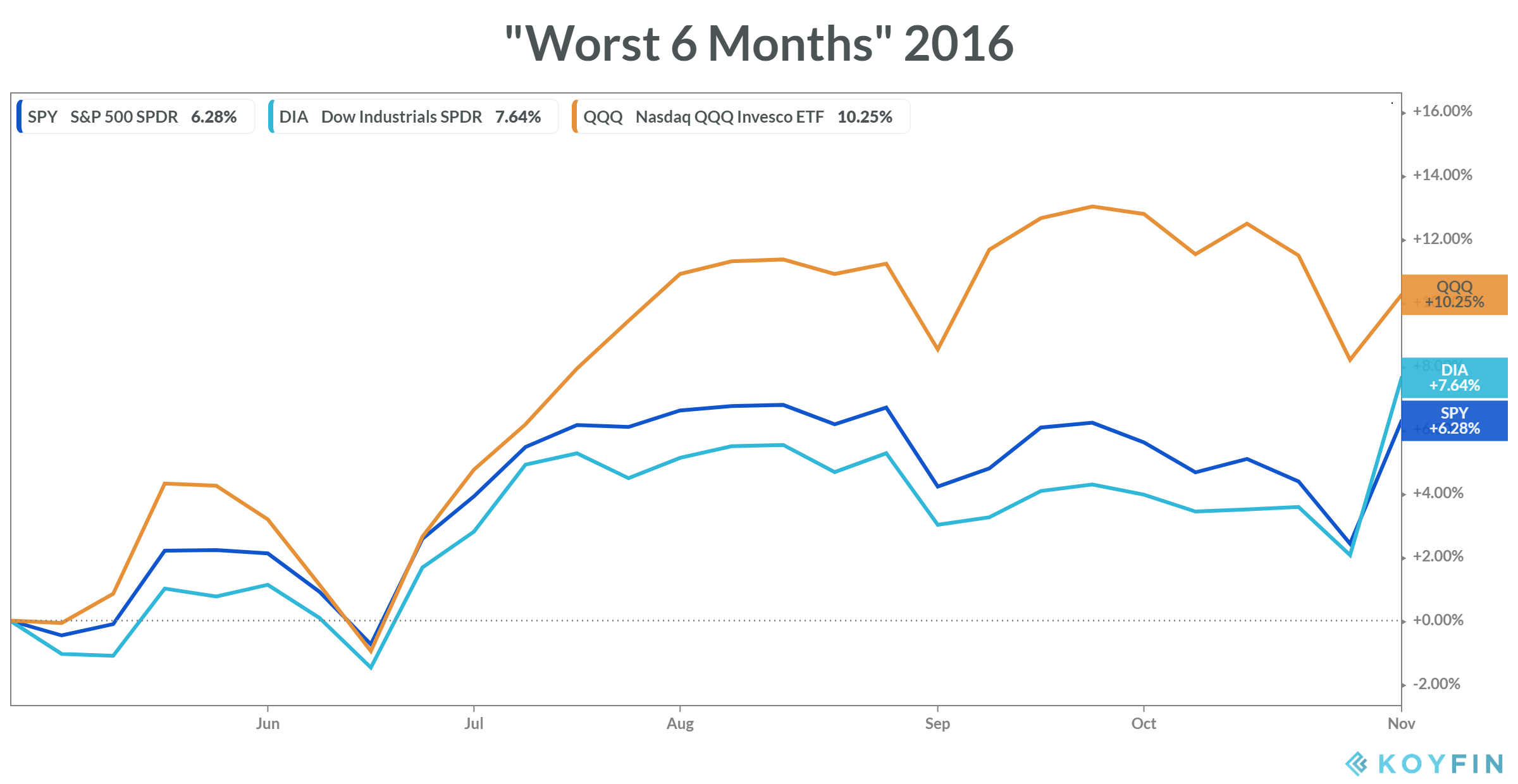 The opposite is also true. When stocks are supposed to do well, like during the “Best 6  Months, for example, and they don’t, then something is up. A classic example, of course, has to be November through April in 2007-2008. This was the best time of the year for Stocks and they ignored seasonal strength and fell instead. That underlying weakness preceded one of the worst bear markets in American history! 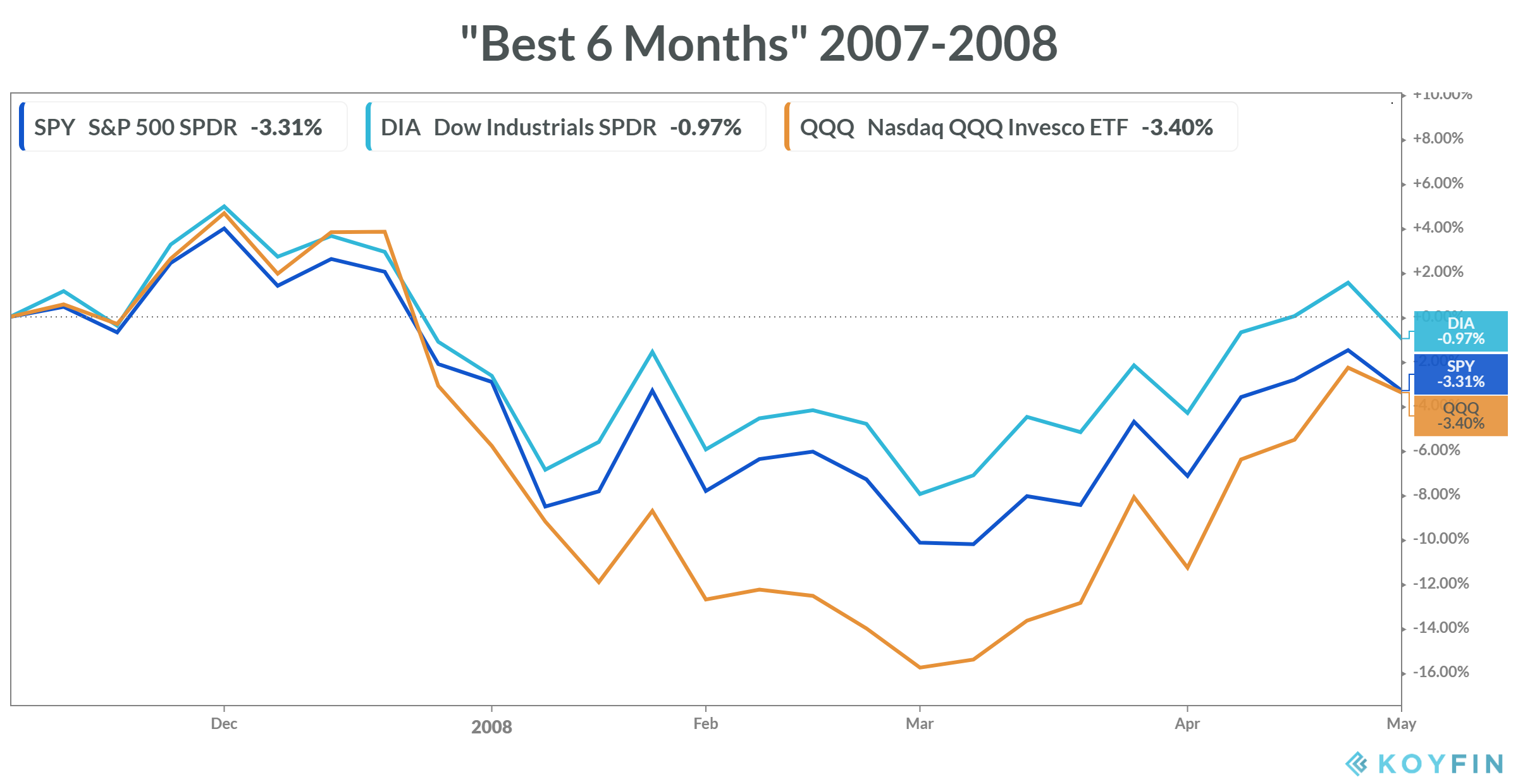 So how are we looking this year during the “Worst 6 Months”? Well, with just a few more weeks to go, stocks don’t seem to be doing too poorly. A little strength into the end of October, and we could be looking at a situation similar to the end of 2016: 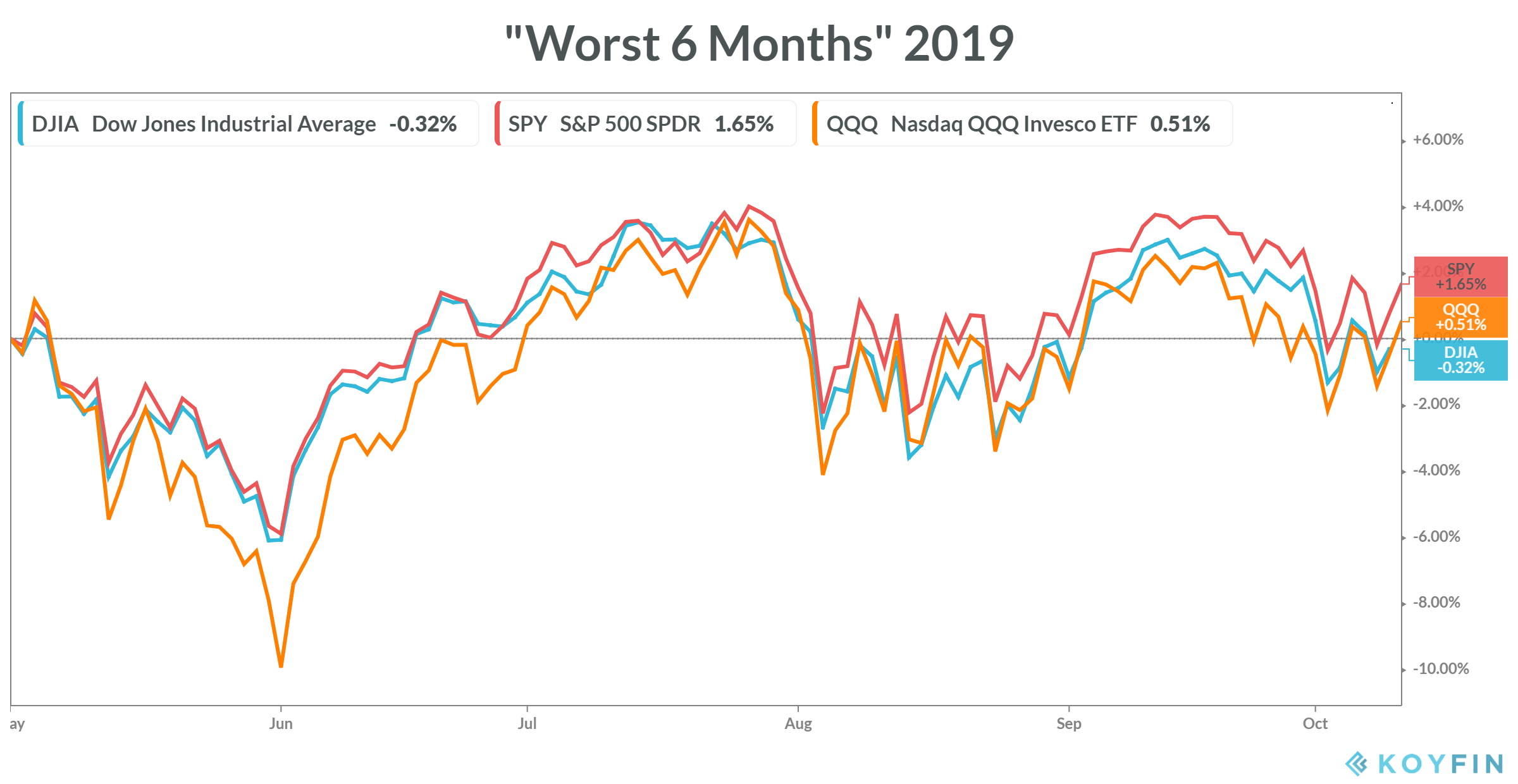 Again, from a seasonality perspective we don’t buy because historically stocks do well in a certain period, and we definitely don’t sell because they’re supposed to act poorly. We use this data after the fact only to see if markets respected or ignored seasonal tendencies.

Looking ahead, however, how do stocks tend to do mid-way through October?

Well according to the Stock Traders Almanac, October has gotten much better over the past 21 years. This is a month that is known for crashes and stock underperformance. But look more recently. It’s actually the exact opposite now. October is a time to buy, not sell: 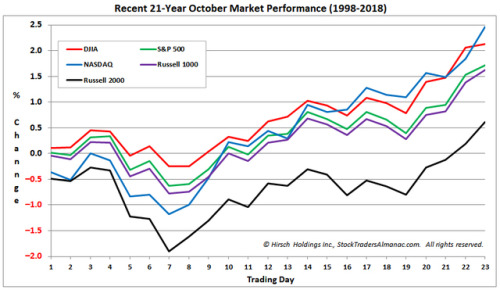 Here is a chart from my friend Ryan Detrick showing the S&P500 performance since 1950, only pre-election years, the past 10 years and the past 20 years. October historically is a good time to be buying stocks, not selling them:

Every late-April / early-May period is littered with press about “Sell in May and Go Away”. The hilarious part is that those same journalists purposely choose not to Remember to Buy In November!

We take a weight-of-the-evidence approach here, as many of you already know. Seasonality is just one tool, one data point in a collection of many. We want to weigh these data points responsibly and appropriately depending on the environment.

As I mentioned in my Q4 Playbook to Profit, we’re looking for stocks to buy, not stocks to sell.

What’s a more bullish combination than stocks breaking out to all-time highs, and most people hoping for a crash. It’s a beautiful thing. Throw the seasonality into the mix and I think it makes for a great trade.