Let me just start out by saying that year-end predictions don’t mean a thing. The big firms give their year-end targets, fund managers talk their book, the blogosphere weighs in, and anyone with a twitter handle has an opinion. But if the data changes, what are you going to do, stick with your predictions and lose money? No, if things change, you make adjustments. There should be a worst case scenario exit before initiating any position, at any point in the year, not just on December 31st. So what does a prediction even mean anyway? To me, it’s what I see right now heading into January. And that’s it.

So now that we’re clear, here are a few things that I’m expecting as I see things right now:

Let’s take each one by one.

The first is the price of Crude Oil doubling in Gold terms. This is something I wrote about two weeks ago. You can go back and read that post to look at longer time frames, but here is the daily chart showing a key breakout after a six month consolidation. I can see this ratio getting above 0.15 from the current level of 0.08. 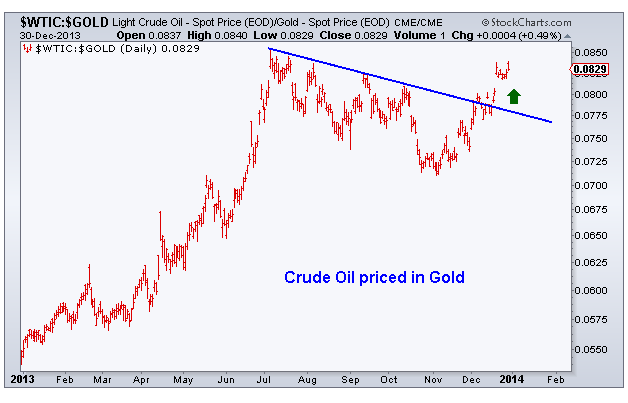 From a risk management standpoint, I would not want to be long this ratio below those mid-December lows. But for now it looks great.

Interest Rates see 2% before 4%. I’m looking at this one from a contrarian standpoint. I’m noticing that everyone is convinced rates are heading higher and the secular bull market in bonds is over. You can see it in the sentiment data. And even with the Fed announcing the beginning of a taper two weeks ago, which is the first time they’re not trying as hard to keep rates down, interest rates haven’t really risen. In fact, rates (10yr) are still struggling to get above those September highs near 3%. With sentiment this negative, and rates failing to rise on “good news”, I think there’s a good tactical buying opportunity down here in bonds. 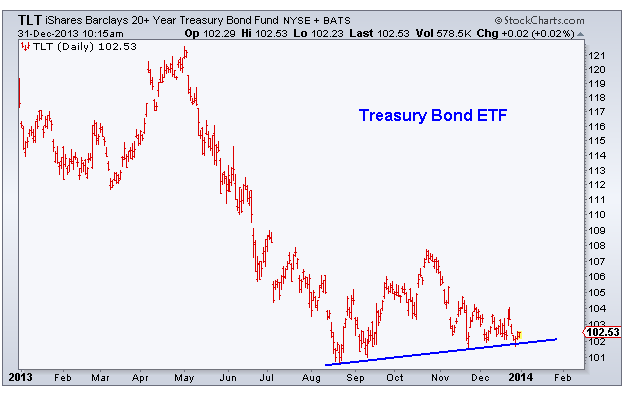 Looking at the Bond ETF $TLT, I would not want to be long below the lows from the second half of the year:

Corn Rallies 30%. This one is a combination of a lot of things. Corn has been one of the biggest losers of the year and is in a vicious downtrend. Looking at longer-term charts, there is some support down here at current levels. From a short-term perspective Corn is in the middle of its best seasonal period of the year, Momentum has turned positive while prices have put in new lows recently and sentiment is near bearish levels not seen since 2009, just before Corn prices almost tripled. Considering how bad Corn has acted over the last 18 months (down over 40%), a counter-trend bounce here could be powerful. 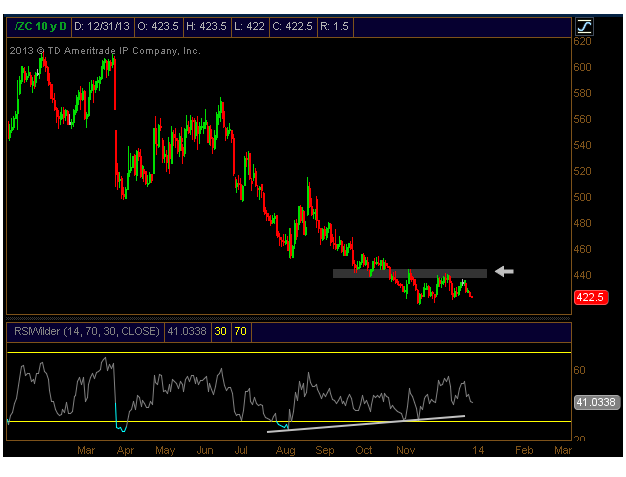 From a risk management perspective, Corn is still in a downtrend and that needs to be respected. I would not want to be long below the November lows, but I would also feel much more confident owning Corn above the shaded area on the chart – mid 440s. This one still has some work to do, but I think the potential is certainly there.

Blackberry doubles in price. This is a volatile stock to say the least. After a nice rally in 2012, the stock has been in a vicious downtrend throughout the year. But the bounces have been powerful. I was on Bloomberg TV earlier this year talking about a potential bounce to trade, and we got a really nice one. I think based on some positive momentum divergences and just the pure hate out there for this name, there could be more to this rally than what we’ve seen so far. I’m looking at those summer highs: 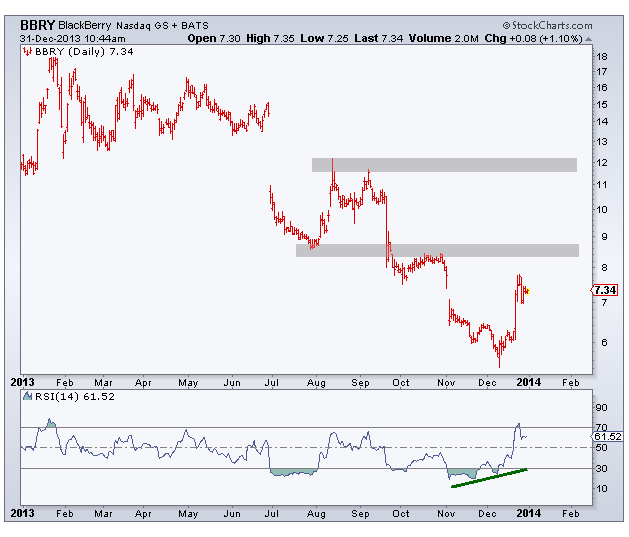 Managing risk is much tougher with this one. That’s what I don’t like about it. I think short-term if you have to be long, keep things tight. I wouldn’t want to own this if prices are below last week’s lows. Down there things get a lot more messy. It’s much cleaner to me if this rally holds and consolidates up here.

Lebron ends the regular season shooting 50% better from the field than Carmelo Anthony. I think this one is pretty clear. Lebron James is the most efficient basketball player in the game. He hits just as many field goals a game as Carmelo, but it take Melo 32% more shots per game in order to hit that number. As great basketball players tend to do, I believe Lebron continues to improve as the season progresses and gets ready for the playoffs. But as the Knicks continue to struggle, I think Carmelo will try to do more and therefore be even less efficient in the second half of the season. And don’t tell me that it’s because Melo takes more three point shots. They make the same amount per game, but Carmelo has to shoot more of them. I can see Lebron shoot over 60% this year and melo down near 40%.

No risk management here because if I’m wrong, it won’t cost any money!

n.
1. The act of predicting.2. Something foretold or predicted; a prophecy.

Call them what you want, predictions or otherwise. To me, it’s what I see right now. If they work, great. If not, well that’s why we have a risk management process in place. I always try to think worst case scenario. Sometimes it’s easier that others. In most of the cases listed above, I think the risk/reward is skewed in our favor. And to me, that’s the most important thing.