At two o’clock on Wednesday, the Federal Open Market Committee announced they would be pulling back on their bond purchases. Even if it’s just by a little bit, this is the first time we’ve seen the federal reserve ease up on the gas. Although they are technically not raising interest rates, this “taper”, if you will, is bullish rates. You can’t argue against that. But interest rates are flat to down after the announcement.

It feels like the old buy the rumor sell the news sort of scenario. Treasury bonds are already at or near multi-year lows. And sentiment is at major bearish extremes. So as I mentioned on Monday, crashes typically don’t come when everyone is expecting one to come. 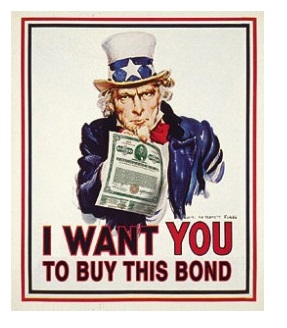 If you take a look at a chart of US Treasury Bonds, prices are at very important support. It’s almost like if this level doesn’t hold, bonds actually could crash. There’s that much downside before the next levels of support. But with everyone expecting it, can it actually happen?

In a scenario like this, I normally like to take the other side of that. The unwind out of extremes in sentiment can make for very powerful moves. In this case, it’s the “obvious” end to a 30+ year bull market in bonds and a new secular trend higher in interest rates. I personally don’t think it’s that simple.

I’m still in the camp that as long as bonds hang on to these lows since August, a major rally could be coming. There are just too many bears out there. Take a look at the Rydex Bull Ratio at just 5% right now. Look at Consensus Inc published by Barron’s each week currently at 32% bulls. They’re coming off extreme lows not seen since early 2011, just before a 40% rally in the iShares 20+ Year Treasury Bond ETF ($TLT). Look at the Commitment of Traders report – the speculators are dumping bond futures as fast as they can, while the smart money (the commercials) are loading up on Bonds.

So the Fed is telling us that they are trying to pick on interest rate a little bit less than they have been. What in theory is bullish for interest rates seems to be somewhat priced in. At least that’s what bonds are telling us (so far). I find this development to be fascinating.

Watch these recent lows in Bonds. If they can somehow hang in there, we should see a monster rally in Treasury bonds as rates come off. It’s a tough trade and no one seems to be on the long side. This combination of key support along with historic pessimism is the recipe I look for. Add the risk/reward ratio which is clearly in the favor of the bond bulls and you have JC’s favorite trade.