There have been some really interesting developments in this particular ratio. This week, and more specifically Wednesday and Thursday, Crude Oil has been attempting a monster breakout relative to Gold. In other words, Crude Oil priced in Gold (as opposed to US Dollars) is taking out key resistance levels and looks to be heading much higher. This could come from Gold continuing its disastrous decline, Crude Oil finally getting going, or perhaps, and more likely, a healthy combination of the two.

Here is the daily chart showing the recent breakout: 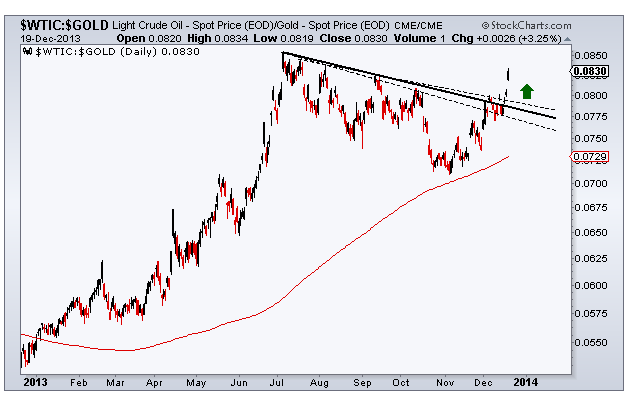 You can draw your downtrend lines from the July highs any number of ways. But regardless of how aggressive or conservative you’re drawing your lines, it appears as though the breakout is on.

Now taking a step back, here is the weekly chart showing a much longer time horizon. Look at the importance of the recent support found this Fall in the ratio. 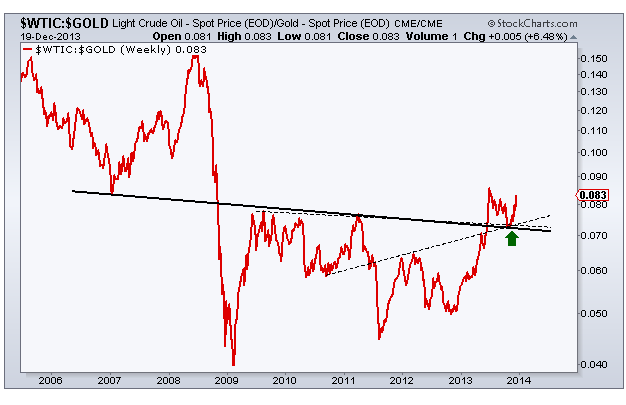 I love it when both the daily and the weekly charts are telling the same story. I’ve been watching this pair very closely this week, but I don’t see it getting a lot of attention. The majority of the commentary I see on The Street is about the Gold disaster, and not how Crude Oil is ripping relative to it.

The one exception has to be my buddy Jonathan Krinsky over at MKM Partners. Him and I look at a lot of the same things in a lot of the same ways. So I wasn’t surprised in the least bit when he hit me up this week regarding this ratio. Here’s what he had to say:

“The ratio of Oil to Gold is pushing above 0.08, or the highest level since September. Momentum of the ratio (RSI) is approaching overbought at the 70 level, so we will likely get some pause as the ratio approaches 0.085. However, this looks like a chart we would want to be buying on dips (i.e. long Crude/short Gold). Gold might try to find support at 1180 in the near-term, but given the fact that it is under a declining 200 DMA, anticipating that level will hold is a tough game to play.

Looking at a weekly chart of the ratio going back ten years (2nd chart), we can see the long-term base, followed by a breakout and re-test of the breakout point. This suggests the trend of Crude relative to Gold is quite sustainable going forward. Further, RSI on the weekly timeframe is far from overbought.”

This is an interesting one; don’t sleep on it. Remember, we don’t always have to own things in dollar terms. This is America, we can use any denominator we want. So although you can argue that, “Gold is not a currency, it’s just another asset“, it doesn’t matter. In this case it is the currency. Any denominator you use is the currency. So the ‘gold is not a currency’ argument is completely irrelevant here, because it is.