Intermarket analysis is always an area of focus over here at All Star Charts. Right now, there are a lot of changes taking hold beneath the surface in some key cross-asset relationships.

For the longest time, the alpha has been in the US… it’s been in large-caps… and it’s been in growth stocks. That’s been the playbook. We know because we’ve been running it back for years now.

Although, we’re seeing strong evidence that this is no longer the case…

One of the best things about our approach is that it allows us to be incredibly flexible and adjust our views as new data becomes available.

We pride ourselves on never being dogmatic. Speaking of which, despite how much we’ve leaned on secular leadership from growth and tech stocks in recent years, the data is suggesting we reposition ourselves in favor of Value (read more about it, here).

Today, we’ll zoom out and explore the impact the recent sector rotation is having on a variety of relative trends beyond, but also related to, Growth vs Value.

In case you haven’t been paying attention, this is the rotation we’re referring to…

You may notice that while each of the themes we cover share similarities, they are still mutually exclusive and should be treated on their own merit. We never want to overthink intermarket relationships or take our analysis too deep.

Remember, whether we have the right grand macro thesis or not, at the end of the day we just want to buy things that are going up on an absolute basis as well as relative to their alternatives. It’s really that simple

Let’s kick things off with this week’s Mystery Chart which was a 20-year+ look at the Nasdaq 100 $QQQ vs Dow Jones Industrial Average $DIA. Thanks to everyone who participated as always.

Responses were mixed, which makes sense as a strong case can be made for both sides, especially across different timeframes.

We have a strong primary uptrend with price currently retesting its former all-time highs from just before the dot-com bubble burst in 2000.

Considering the time, here’s the monthly chart which better illustrates prices inability to bust through those prior highs just above 1.

With that said, the ratio is coiling constructively in a tight range just beneath a key level. Considering the primary trend is up, a pattern like this should be expected to resolve higher.

Though with waning momentum and significant resistance looming overhead, it wouldn’t shock us to see the trend become rangebound or even reverse at this logical level of supply.

In our eyes, this ratio is just another way to visualize the Large- Cap Growth vs Value or Technology vs Financials relationships.

Technology dominates the Nasdaq 100, with a near 50% weighting. Meanwhile, the growth-heavy index has ZERO exposure to Financials.

The Dow, on the other hand, has more exposure to Financials than any other sector, with a roughly 20% weighting.

This is almost a mirror image of the sector composition differences between growth and value, which we discussed in a post earlier this week.

For this reason, when we zoom out, these ratios look quite similar as both are trading right at their dot-com bubble all-time highs. Here’s a look at growth $IWF vs value $IWD dating back to 2000. 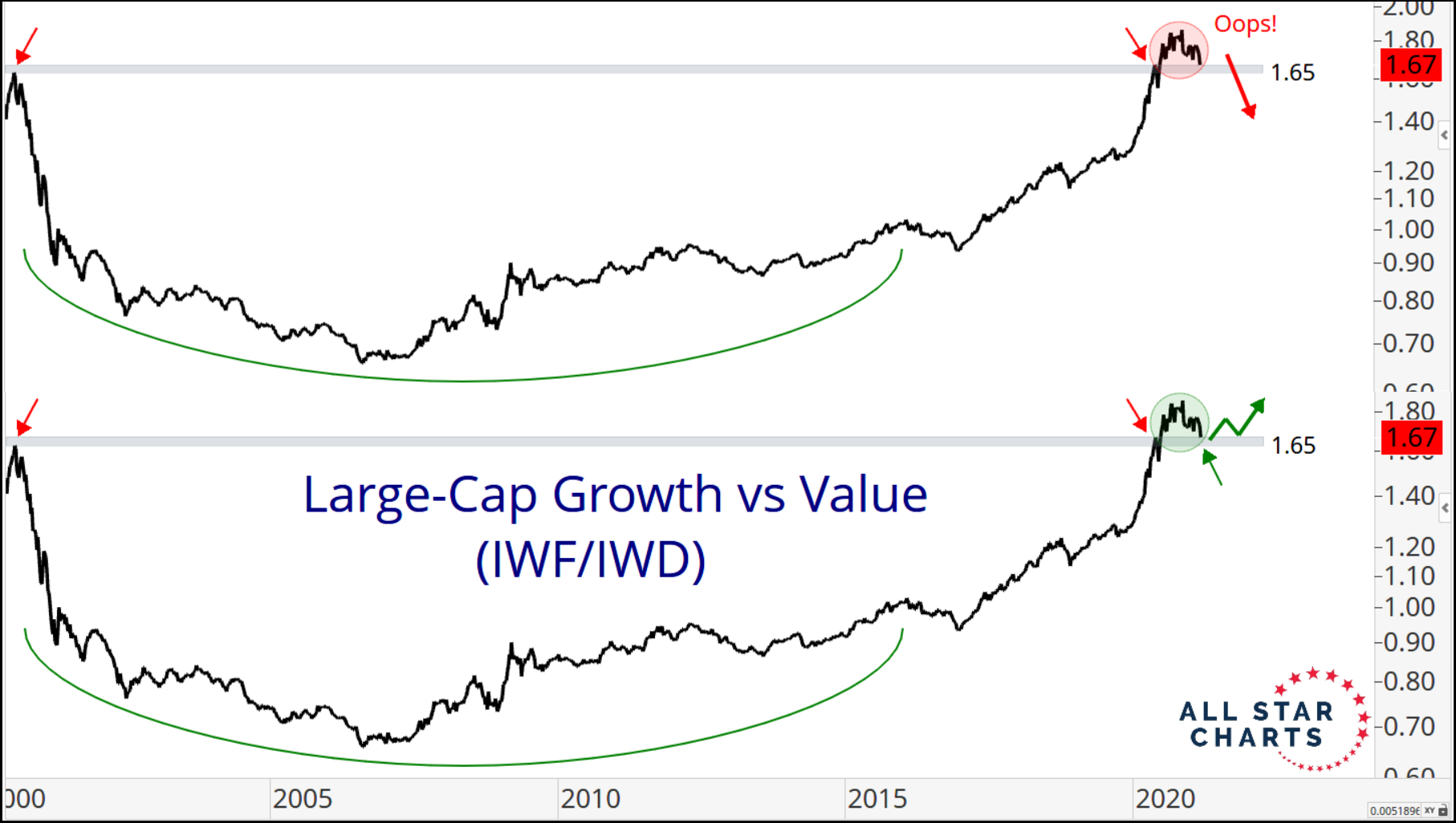 Which way is it going to be is the question?

As we discussed this week, from a tactical perspective, the line in the sand is undoubtedly 1.70. Although, this move could soon materialize into something more significant as the trend starts to endure structural damage below the former highs of 1.65.

Now let’s analyze some other ratios and derivatives of the Technology vs Financials trend for insight as to which way Growth vs Value and the Nasdaq vs Dow are likely headed from here.

If you look fast enough you won’t even notice the difference between these next two ratio charts.

Aside from the fact the Nasdaq 100 vs Russell 2000 is BELOW its 2000 highs while the Large-Cap Technology $XLK vs Financial SPDR $XLF is ABOVE this key level, these charts look more or less the same.

These are also a good summation of what the broader weight of the evidence is suggesting over any long-term timeframe… That is, the outlook is mixed. The top chart suggests this is a logical place for growth (Nasdaq) to cede its leadership to small-caps (value), while the lower one shows growth (tech) breaking out of a multi-decade base relative to Financials (value).

Let’s recap. What do we know?

We know large and mega-caps are lagging SMIDs.

And we know large-cap growth has been underperforming large-cap value.

But, how are these factors making out within their own respective cap-segments? 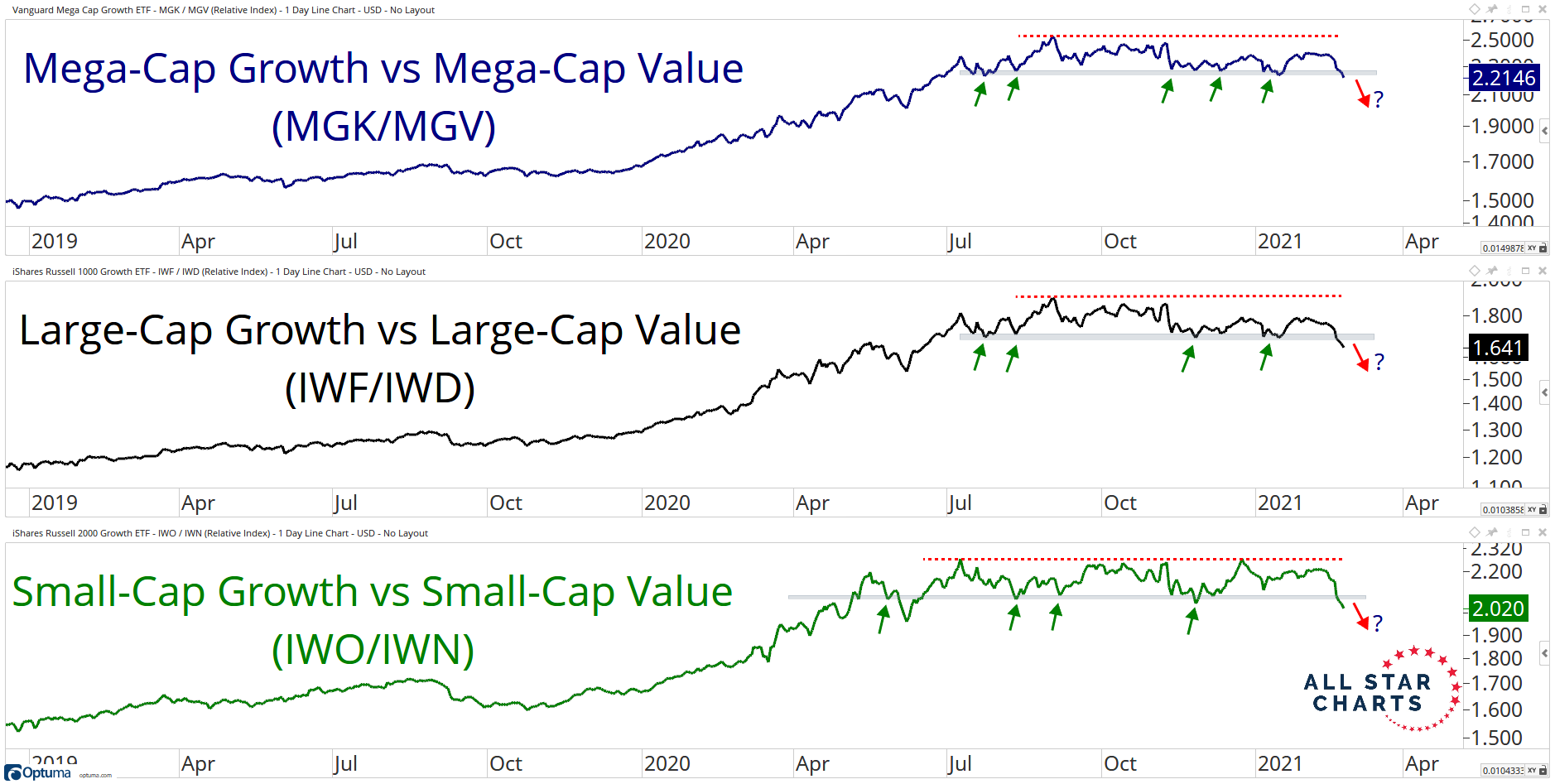 While the trend is certainly not as pronounced among smaller stocks, it appears to be underway as the small-cap ratio just violated support at key prior lows.

Speaking of small-caps, growth vs value has also had a strong correlation with the large vs small-cap ratio throughout history. This is particularly true when we use the Nasdaq 100, and why shouldn’t we? That’s where the leadership has been.

Here’s a look at the same growth vs value ratio, but this time inverted and overlaid with the Russell 2000 vs Nasdaq 100 which is a representation of the small vs large-cap relationship.

After breaking out of nice bases, the bias is in favor of small-caps and value over the short-to-intermediate timeframe.

Now let’s talk about another major relative trend that’s been under pressure of late. Do you know what else has lopsided exposure to financials relative to US large-caps?

The answer is basically anywhere else in the world! Here’s a ratio of International $VEU vs US stocks $SPY overlaid once again with value vs growth.

Again, the seeds have been planted with a nice base breakout, but the current level needs to hold if we’re going to see any sustained outperformance from non-US equities. Everything else we’re seeing suggests it will.

These new developments may cause discomfort for many investors as it’s a big shift from the overweight US/big-cap/growth strategy that’s worked for such a long time. But there’s been a notable change in character in these trends and we have to react.

For the first time in a long time, within the large-cap universe, we want to favor traditional Dow stocks over the FANGs and mega-cap tech. With that said, we want to own SMIDs and micros over large and mega-caps. We want to own cyclical and commodity-centric stocks over tech and growth… And we want a significantly higher exposure to international equities.

While near-term risk is to the downside for growth and the former leaders of these relationships, when we zoom out, many have recently reclaimed record highs from 15-20 years ago… which is a very bullish development.

Therefore, we can make an argument that as long as these levels hold – like the 2000 highs in growth vs value and tech vs financials, the structural trends remain in place

For now, we’ll just have to wait and see how these ratios react to the levels outlined in this post. As more data pours in, we’ll be sure to update you on our view as to whether or not these are merely counter-trend moves or full-fledged bull-bear reversals.

In the meantime, let us know what you think!

Is it finally value’s time to shine?