I’ve caught myself talking more and more about Cryptocurrencies since last Summer.

And there’s a reason for that.

We like buying things that are going up in price, and selling (or not buying) the things going down.

You guys who have been around for a while remember me writing about, commenting and informing readers about Bitcoin back in 2016. I was talking about Crypto trading then even more than I am now. In fact, if you knew me back in 2014, I probably sent you some bitcoin as a gift. I was into doing that sort of thing back then.

BUT, in between 2018 and 2020 there wasn’t really much to do in that space, so I stayed quiet and focused my efforts and attention elsewhere, like in Technology and Growth stocks for example.

More recently, we’ve been pounding the table about Bitcoin since last summer and then Ethereum more so throughout 2021.

Because they’re going up!

The most bullish thing an asset can do is go up in price.

I don’t care if it’s shares of $AAPL or $TSLA, it can be Corn or Soybeans, US Treasury Bonds, New Zealand Dollar, Silver, Crude Oil…. It doesn’t matter to me one bit.

I’m too old for this shit.

I learned this lesson the hard way many years ago (we all have to).

I can’t get emotionally attached to assets.

We don’t marry them, we just date them.

Rates can go to double digits, Crude Oil to 200, Copper to 10….OR….Rates can roll over again and go negative, Crude back to 20 and Copper under 2.

DOES NOT MATTER TO ME EITHER WAY.

Now back to Crytpo.

I’m not a laser eye religious freak. But we’re long. Been long. I think they go higher. Much higher.

But so what? I can change my mind. Happy to.

Because I don’t care.

It doesn’t matter to me at all.

It’s just a trade. One of many.

It’s really not a big deal.

If it is to you, then you’re probably too big, too emotionally involved and it’s going to get you. It’s going to get you bad. Crypto, Gold, Tesla, whatever religion you’re into, I encourage you to stop going to church. Stop paying your dues.

It’s not worth it.

It’s just letters and math. Don’t treat it as something it’s not.

Ethereum Up 7 Months in a Row.

Bitcoin down in April.

There’s a good reason for it and it goes something like this,

“The Bigger The Base, The Higher In Space”.

I asked Louise Yamada where she learned that and she told me it was Alan Shaw who taught her. So I went to Alan and asked him where he got it from (keep in mind, he started his career in 1958).

He told me he learned it from his predecessors, guys who had already figured out the power of a large basing period.

It’s funny, little did they know that we would be applying these very same principles to Crytpocurrencies.

More recently it was the bases in Bitcoin last summer giving us 30,000 targets (which is laughable by this point). We had to raise our targets to 70,000 earlier this year.

In Ethereum, the relative strength had been there, but when ETH broke out above its 2018 highs, completing its base, that was the entry.

Buying breakouts from massive bases has been a great strategy for a long long time, well before cryptocurrencies were a thing. They figured this out almost a century ago.

Fortunately we have mentors like Louise Yamada and Alan Shaw to pass down those discoveries.

Bitcoin exploded from its base. More recently its been Ethereum.

In fact, Bitcoin was actually down last month, for the first time since September.

Ethereum, on the other hand, put in its 7 consecutive month of price appreciation.

Relative to Bitcoin, Ethereum just went out at the highest level since July 2018: 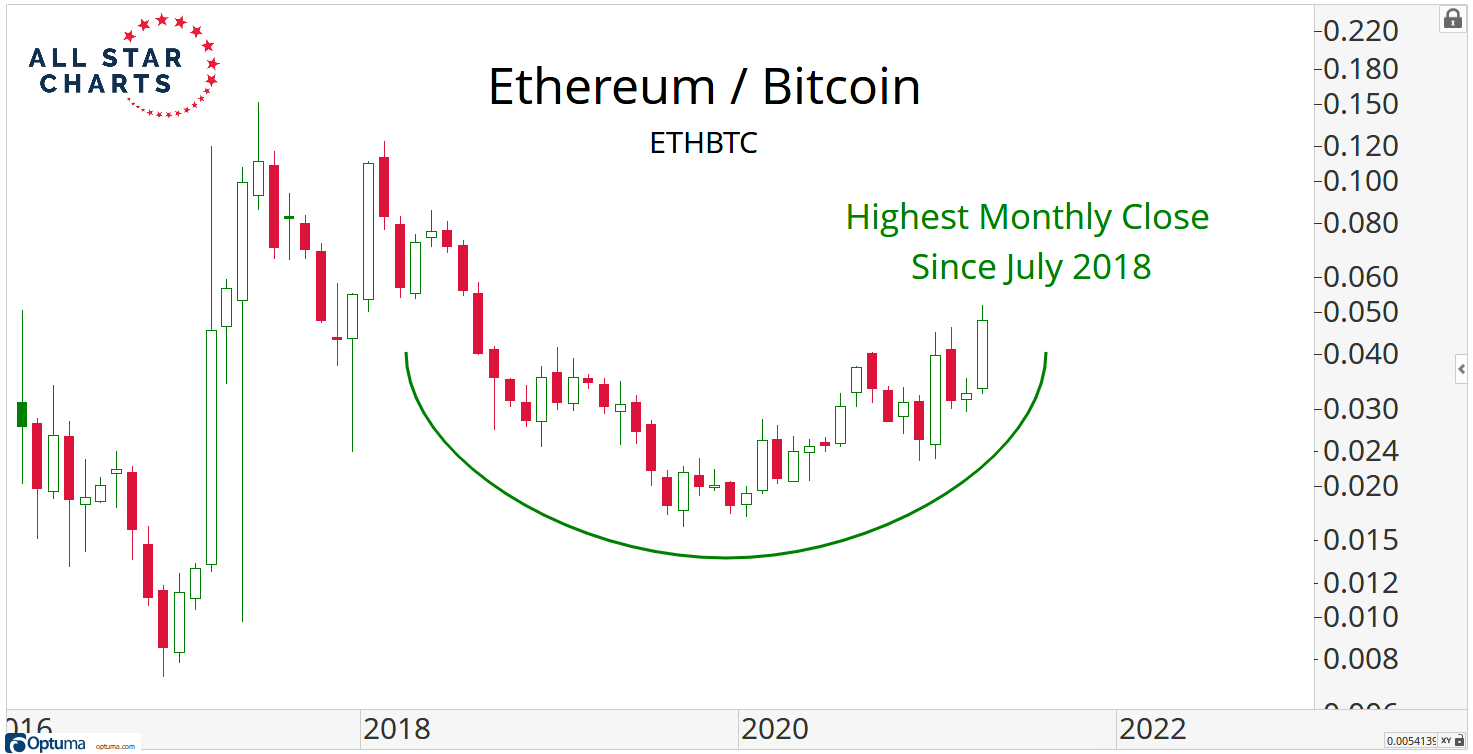 Did you hear what Charlie Munger had to say about it?

“Of course I hate the Bitcoin success…. I should say modestly that I think whole damn development is disgusting and contrary to the interests of civilization, and I’ll leave the criticism to others.”

What do you think about that?

Or should we be listening to them?

It’s a fascinating study of human psychology and philosophy.

It’s pretty cool, if you ask me.

I don’t care either way, really. We have our stops in, like we would in any stock or ETF or commodity. So it doesn’t matter to me who is right in the end.

I feel like I’m eating popcorn watching it all play out.

How do you feel about it?

Or do you think it’s better to just stay in stocks and avoid cryptos even though the largest 8 coins have market-caps of over $30 Billion, with Bitcoin over $1 Trillion and Ethereum pushing $350 Billion?

What’s the argument to be close minded?