If you’ve been following me on Stocktwits lately you would have noticed a little bit of an obsession that I’ve had with 1150 on the S&P500. This level has been so critical throughout August that ignoring it would be a huge mistake. After testing this level yesterday just before the earthquake, the S&P500 managed to close significantly above it at 1161. Here is the August chart using 30-minute timeframes: 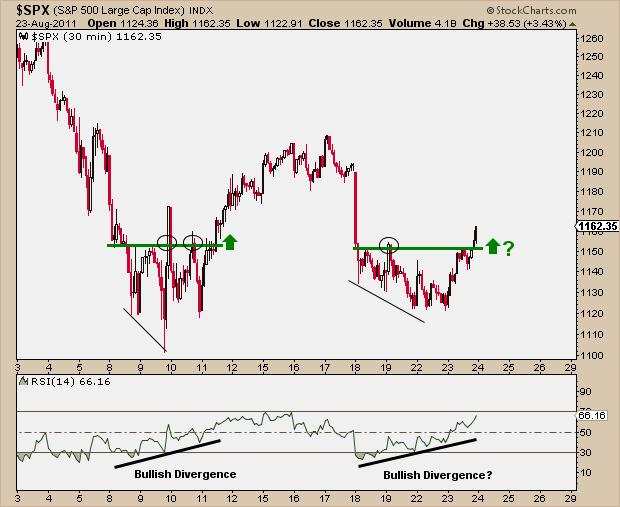 Back in early August, it was clear that 1150 was important. You can trace this back to last year when 1150 was a key support and resistance level several times, including the top of the “left shoulder” in January of the H&S pattern that never panned out. More recently, 1150 was broken on 8/8 to cause some more damage to the charts. After a couple of false breakouts, the S&P finally broke out through 1150 and sparked a nice rally.

Once the index hit our initial 1205 target, the market sold off to get back below 1150 last Thursday. Since then, we have been watching this area closely, almost laughing at the fact that we’re not interested in initiating new long positions until that level was recaptured.

Well here we are. Can the market hold onto this level? Will that resistance become support on any tests? The initial target will once again be just above 1200 (and 1260 after that). If we roll over and take out Monday’s lows, I would be looking for support near 1020.