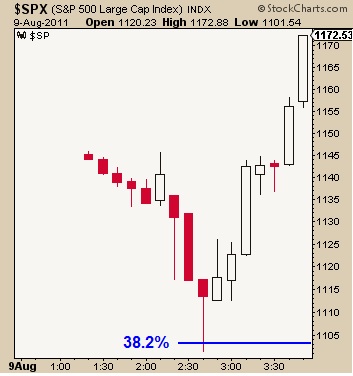 When there is volatility in the air, and I mean real volatility, we want every edge possible. On Monday we said that it was time to take a step back and look for levels where buyers could potentially show up. Using Fibonacci Retracements going back to the March 2009 lows up to the recent highs, we saw some levels that could work. In this case, it was the onslaught of buyers that we were waiting for to show up. Tuesday, we broke below 1103, the 38.2% Fibonacci retracement, for all of 3 minutes before starting the monster rally that we figured would come eventually. Was that the bottom? Of course we don’t know yet, but we do know that it was a bottom. A nice trade-able bottom where a lot of people made money fast while some lost a lot of money fast trying to short it.

Now what? Where do we stop rallying? Let’s throw up some Fibonacci Retracements: 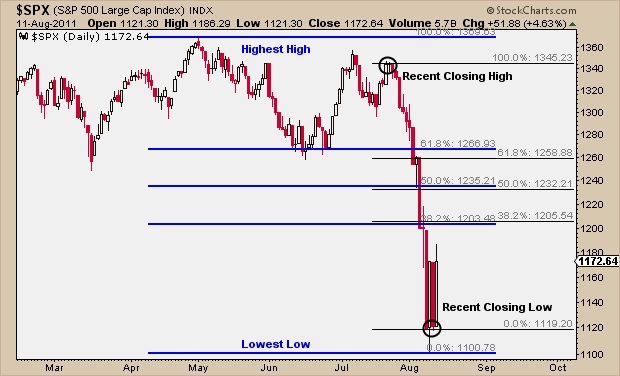 I apologize for all of the lines and digits along the right side. I pride myself in simple, easy-to-read charts, and this isn’t one of them. What I’m trying to show here is that Technical Analysis is not an exact science, it’s more of an art. So do we use the ultimate highs and lows or the most recent closing highs and lows? I’ll use both and look for areas where sellers could come in. The first obvious level that I can see is around 1203-1205. So as we approach 1200, I’ll consider selling some stocks that we’ve bought this week for short term trades.

Maybe the rally lasts a little longer. If that’s the case, we’ll look to take a little bit more off. The real serious problems start around the 1260 level where we see a the 61.8% retracement, but more importantly the June lows that recently broke to cause the panic in the first place. Mark my words: this level is going to be trouble at some point in the future, whether its now or much later.

What if this week was just a bottom and not the bottom? Well based on the chart in Monday’s post, I would be looking for the next key support level to be around 1020. That’s an awful long way down from here, so the bulls need to be on alert around the recent lows if they are retested.

If you’re a long term investor and don’t care about these intraday swings, all of these numbers don’t mean much to you. However, there are a lot of us that like to put some short term trades on to take advantage of this huge volatility that doesn’t come around too often. Again, these are just areas where we want to look for potential turns. It doesn’t necessarily mean that they always work. It just so happens that Tuesday could not have set up a better risk/reward if you knew what numbers to look for. Sure the S&P500 only went up 6.5% or so. But some stocks really exploded off those levels. Let’s keep these numbers up top in the back of our mind when entering and exiting positions. At the very least, it will help manage risk, and that’s why we do what we do.