We have been pounding the table to be buying U.S. stocks and ignoring the bearish rhetoric coming from almost everyone these days. I have never seen a stock market crash where people have been this prepared for it. I get an email a day warning me about this coming historic crash. We’ve happily taken the other side of this nonsense and continue to believe the path of least resistance is higher, much higher in fact.

However, the market doesn’t care what JC thinks and is going to do whatever the heck it wants. That’s life. So ahead of any serious correction, we want to identify levels where we would start to become much more neutral towards equities. Tightening stops, being less aggressive from the buy side, owning put protection and strategies like these are most appropriate under these conditions. Today, I’m going to lay out what it’s going to take for us to approach the market from a more neutral to bearish perspective:

NOTE: The information from this point forward was originally Premium Content but has been opened up for educational purposes

The first chart we want to look at is the S&P500. Here is a daily look at the futures where you can see prices holding above the late-January highs. This is our new line in the sand. If we are not above 2875 then a more neutral approach towards equities is best: 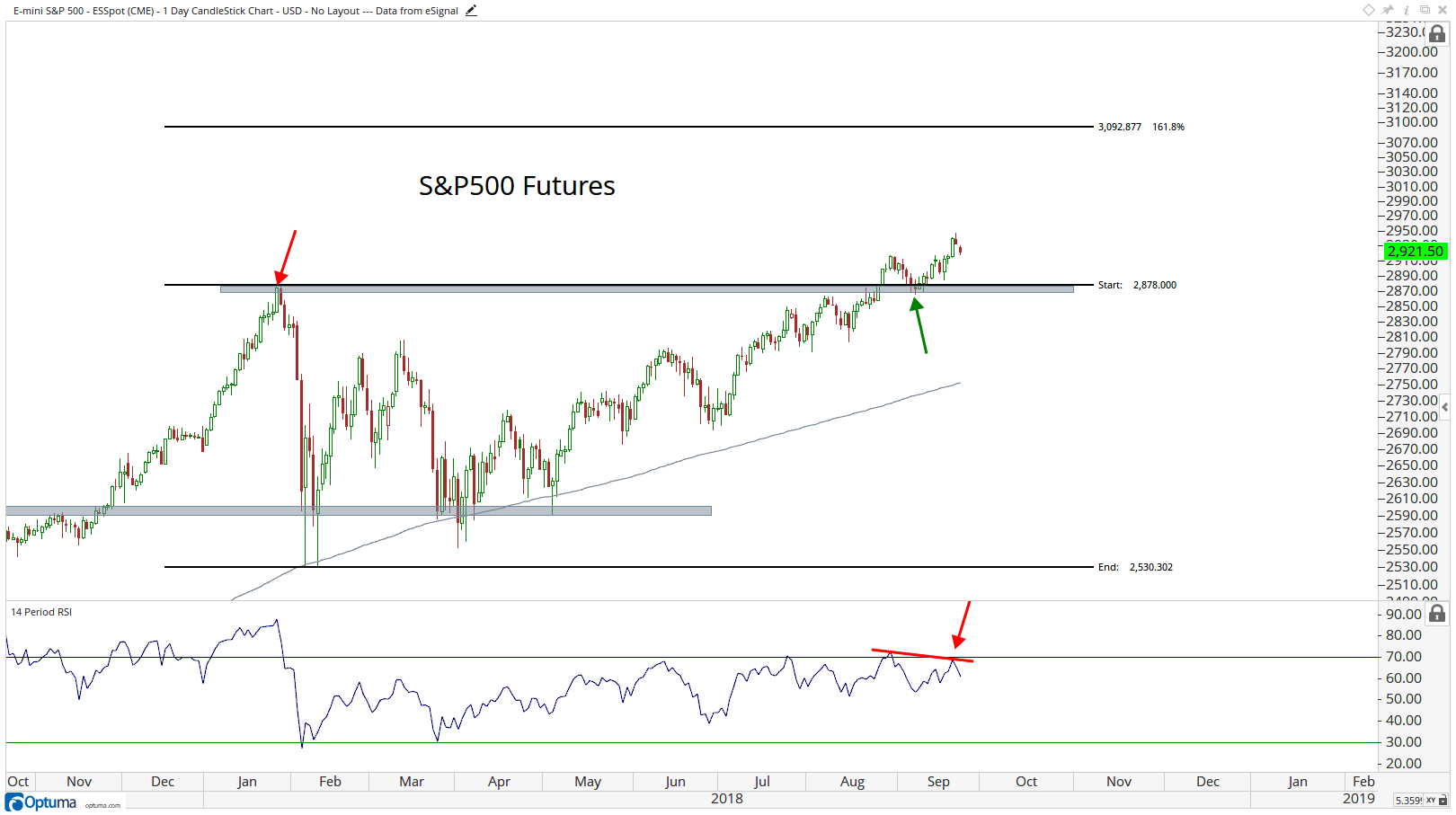 This neutral approach would be most appropriate for several reasons:

1) It would set up the late August breakout as a “failed breakout” and the way I learned it: “From failed moves come fast moves in the opposite direction”

3) Prices below 2875 would confirm a bearish momentum divergence

4) opportunity cost (what else can we do with that money?):

We’re not here to be right, we’re here to make money. While we remain bullish of stocks, we always want to imagine what the world would look like in the off chance that we are incorrect in our bullish assessment. I say off chance somewhat tongue in cheek because we always assume we’re wrong and try to identify what levels will prove us wrong (or right). In the case of the S&P500, 2875 is it. If we’re not above that then we don’t want to be aggressively buying stocks, at least for now.

Another important situation we’re monitoring is the Russell2000 Small-cap Index which has been the leader this year for sure. Look how prices broke out above their January highs in May, when it took the S&P500 until last month to finally do it. Hitting this 172 area and acknowledging that as overhead supply is perfectly normal. This level represents the 161.8% extension of that January/February decline and also the 261.8% extension of the entire 2007-2009 decline. I cannot emphasize enough how important this level is: 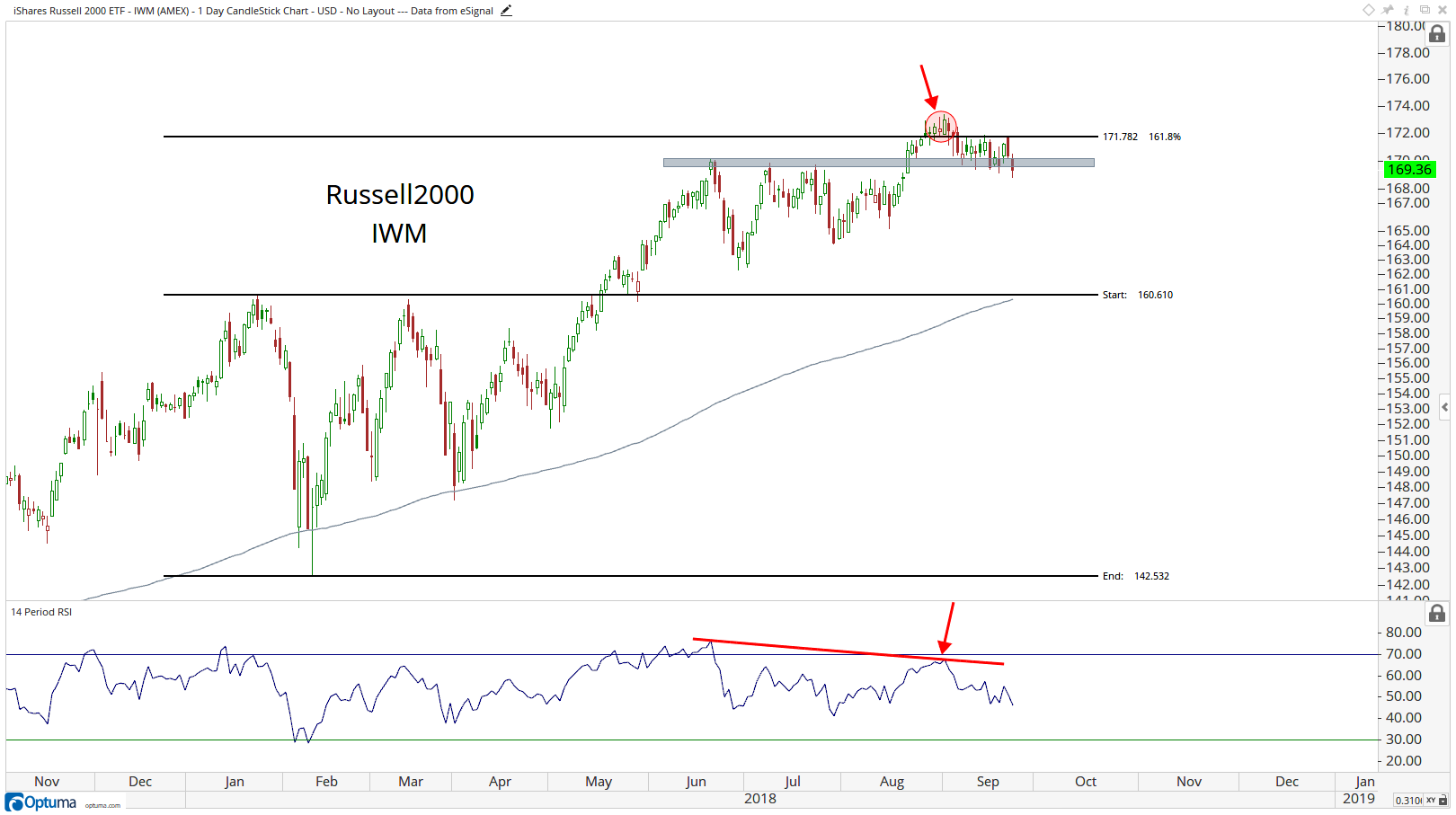 I think $IWM holding above 172 would be really constructive for the overall market. However, if we’re below 169, it sets up a lot of the same risks mentioned above in the S&P500: Bearish Momentum Divergence and a failed breakout, therefore increasing both opportunity costs and downside price risk.

Bringing our focus back to the large-caps, last week the Dow Jones Industrial Average was finally able to break above its January highs, something that every major index had already been able to do. The ability, or inability, for the index to hold above 26,600 will tell us a lot about the near-term risk in stocks. If we’re not above it, then risk levels are absolutely elevated: 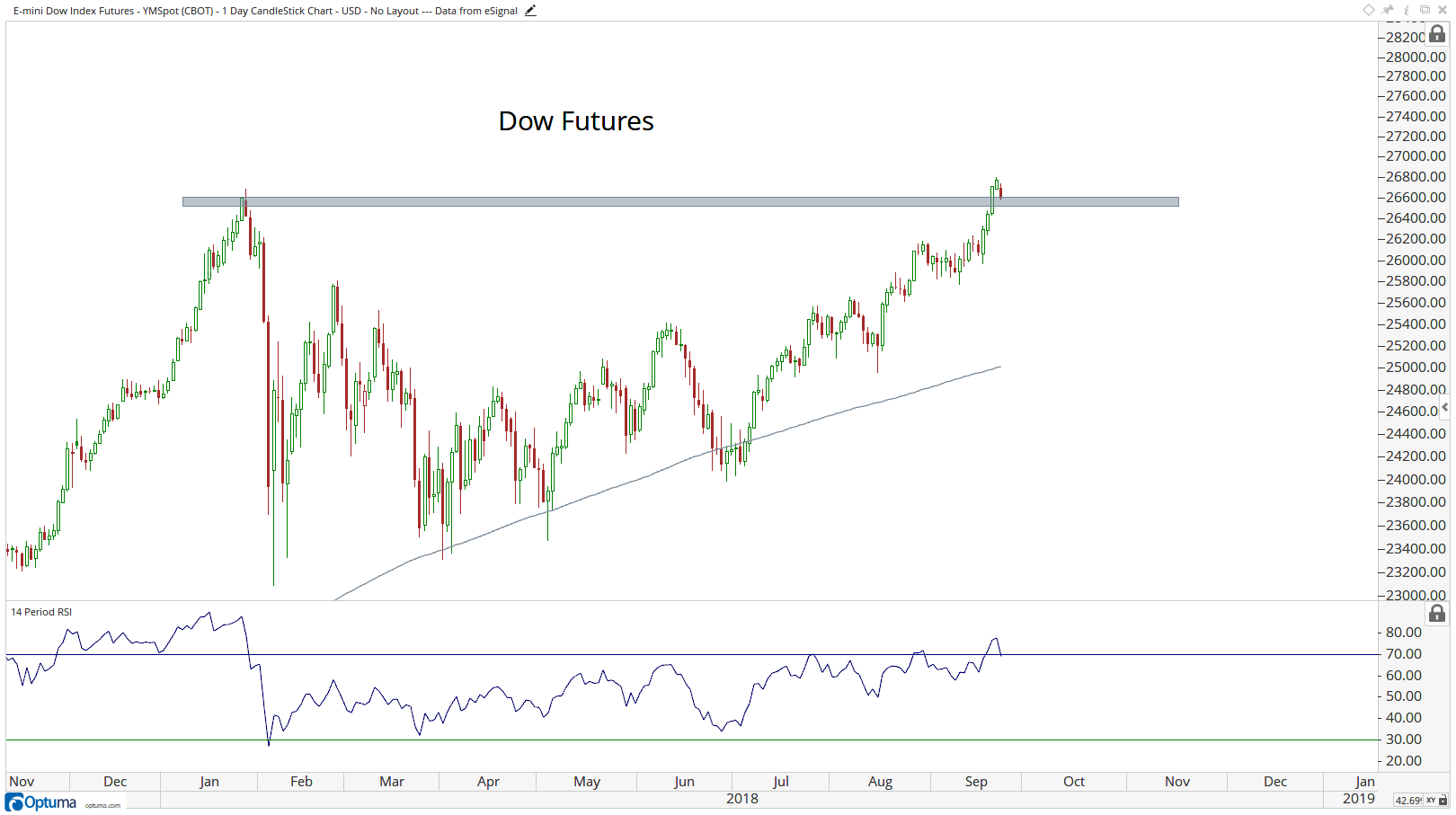 Markets can absorb overhead supply in one of two ways, either through a downside price correction or sideways through time. The latter is obviously the more constructive of the two for the overall trend, so we’ll be watching this one closely.

There are a lot of important indexes flirting with key levels. While we remain very constructive towards US Stocks, the most important part of our process is the risk management. That’s what we’re doing today.