There is a great piece over at Pragmatic Capitalism today about using the Commitments of Traders Report (COT) as an indicator to trade Crude Oil. I briefly mentioned this tool in my ‘Are You a Technician’ post last week. But I think McClellan does a nice job here of taking it a step further.

The move, typically, is to see how the Commercial Traders are positioned in the market – because that is where “the big money” is. And at the same time, you want to stay away from whatever the Small Speculators are moving on – because, in theory, they’re on the wrong side of the market. In the case of Crude Oil, however, this tool doesn’t work as well.

According to the McClellan report:

“One of the problems with looking at the COT data for crude oil is that some of the “commercial” traders are actually oil producers, who are using the futures market to lock in pricing for their future production.  Other entities like airlines and rail carriers use the futures markets to hedge their fuel costs, so it is not so much of a matter of the smart money versus the dumb money.”

“There are times when this indicator gives us great indications of a top or a bottom for crude oil prices.  And then there are other times when listening to it would be a horrible idea.  It is just not consistent enough to be reliable.“ 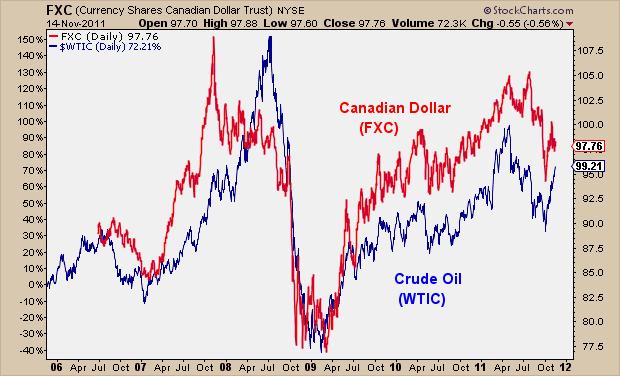 From The McClellan Market Report via Pragmatic Capitalism:

“The COT Report data for Canadian dollar futures offers us a much more reliable indication for both that currency, and for oil prices.  One reason for the greater reliability is that there are no “producers” of Canadian dollars like there are oil producers.  So it is a much purer bet on the direction of exchange rates.” 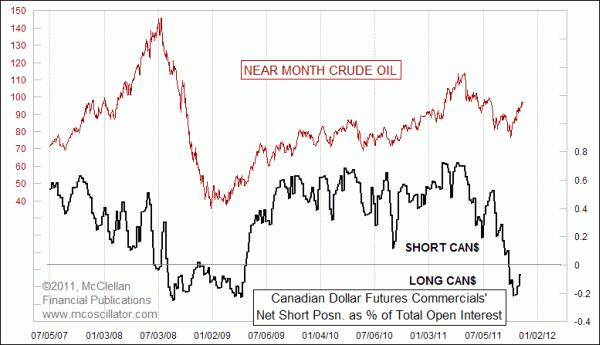 “Right now, in November 2011, commercial traders of Canadian dollar futures are back to being net long, after having shown us a big net short position earlier in 2011 when oil prices and the Canadian dollar were topping.  The message from this net long position is that crude oil prices should be expected to head upward from here.”

A couple of weeks ago we pointed out that the price Crude Oil had broken out of its downtrend. Since then, the price of Oil has literally been on fire, closing at 3-month highs today. We’ll be watching how the Commercial traders are treating the Canadian Dollar going forward as a tell for Oil, but so far so good.