I get asked all the time, “Why are you a technician?” and “Do you really think that by looking at charts you can actually make money in the market?“. These sort of questions have come from college interns, to seasoned vets on the Street, to my 85 year-old grandmother. My conclusion is that most people don’t really know what technical analysis is. A lot of people won’t admit it, but they have actually been technicians for most of their careers.

I thought that I made a pretty good argument for Technical Analysis on my buddy JB’s ReformedBroker Blog this summer. But let’s take it a little bit further. I really believe that there are more technicians out there than you think. I had a little twitter debate with my 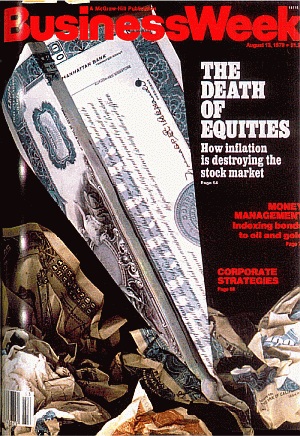 friend Robert Sinn the other day, author of The Stock Sage Blog, about market sentiment, and whether or not technicians use it. My response was that if they didn’t use it as a tool then that’s their problem. No one is stopping you from using that data. But the answer was a clear YES – using market sentiment as a tool, whether it’s polls of Individual Investors, or Financial Advisors, or Newsletter writers, is the study of the action of market participants. We also use Put/Call figures to determine extremes in Bullish and Bearish Sentiment. Checking out the cover of a popular magazine that portrays market sentiment is also used as an indicator. Look at this BusinessWeek cover from 1979 about the “Death of Equities”. You want to talk about contrarian indicators? This sucker was printed right before the biggest bull market in stocks that we’ve ever seen. All of these things we’re talking about are gauges of market sentiment. It is all considered technical analysis for the simple reason that we are studying the action of the market and its participants, not the cost of goods sold.

Quite often I hear a buddy of mine in the industry tell me that he is 100% fundamental and does not find a need for technical analysis. This same guy calls me on a Tuesday morning all worked up about the US Dollar rallying and that is why his stocks are down. Then I ask him, “are US Treasuries up too?” – and he immediately tells me, “Yes of course – flight to safety, it’s Risk-Off today”. I chuckle a little, and then ask him what Oil and base metals are doing (already knowing the answer). And he says, “JC you know they’re getting crushed bro, I just told you that they’re Risk-Off today”.

Guess what fella, this Intermarket analysis that you’re doing is a study of the action of the market itself. It’s OK to admit that you’re a technician. This isn’t the 60s when Alan Shaw and his buddies would get laughed at by the hard-core fundamental community. We are all one big happy family trying to make a profit from this market. It just so happens that studying the action of the market itself is really really helpful in trying to do that.

It’s not just about looking for cleverly-named chart patterns either. There is a lot more to this than looking for a Head & Shoulders or Symmetrical Triangle or an Evening Doji Star. There is a lot of money to be made by looking for patterns. Peter Brandt, for example, is great at finding traditional patterns on charts ranging from Silver to the Nasdaq to Soy Beans. But that is not where technical analysis ends. There is much more to it, and Sentiment and Intermarket analysis can play a huge roll. In fact, Mr. Brandt consistently watches the Commitment of Traders Report to see what speculators and commercials are doing, again as a gauge of sentiment (studying market action folks).

How about when I hear people dismissing technical analysis, but then talking about how the end of the year is usually a good time for stocks. And then those same people tell me to sell in May and go away. For all I know, they could have a bedside copy of the Stock Traders Almanac. Guys, the study of how seasonality has an impact on the market is, all together now, the study of the action of the market itself.

So next time you make a comment or dismiss something that you don’t think you need as a market participant – really give it some thought. You can rip apart balance sheets and income statements all you want. There is nothing wrong with a bottom-up approach. But if you incorporate all of that time and energy with some of the easier to come by data listed above, appreciate the fact that you are conducting technical analysis. Be proud of it.

Remember what John Murphy once said,

“All chartists are technicians, but not all technicians are chartists….it should be remembered that charting represents only one area in the broader subject of Technical Analysis”