Over the past few days I’ve received requests from readers about my thoughts on Russian stocks. While I don’t particularly care about the US/Russia relations when it comes to picking stocks to buy and sell, it seems to be something of interest to a lot of people. So let’s dive in.

I think it’s important to start with a longer-term view and then work our way down to shorter-term more actionable timeframes. So here is a chart of the MICEX in Russia going back over 10 years showing how we have broken out above the downtrend line from the all-time highs in 2007 and above resistance from those highs. In other words, this chart represents the answer to the question: has that supply since 2007 been absorbed and can we move on to the next leg of this massive uptrend? 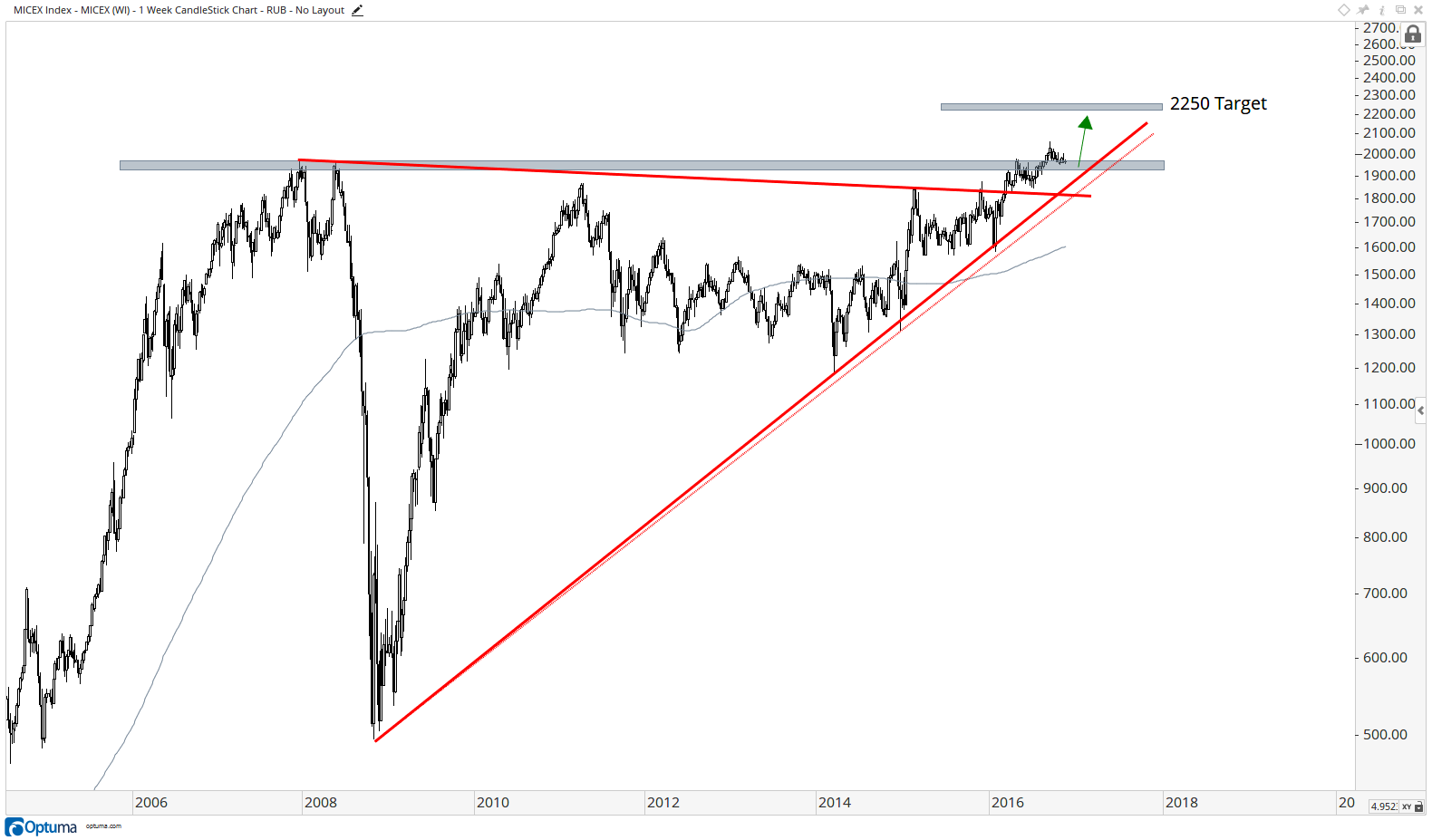 The way I see it, if prices are above the 2007 highs, we have to err towards the idea that any overhead supply has already been absorbed. Here is a closer look at the MICEX where prices are finding support the past few weeks near those December 2007 highs. If we’re above 1950, I think it makes sense to be long Russian stocks: 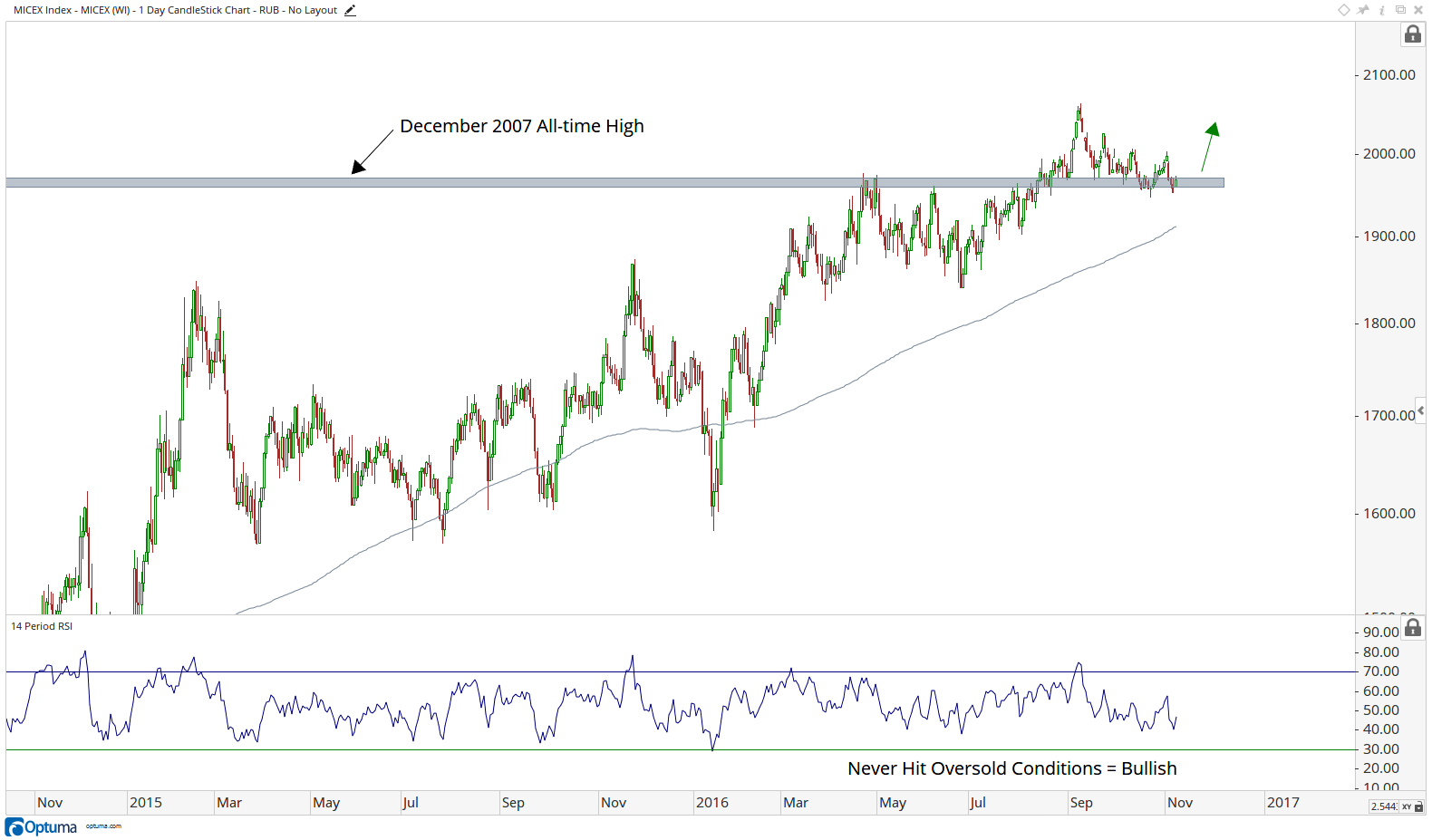 Now, let’s remember that the MICEX is priced in Russia Ruble. So if you’re trying to buy Russian stocks in the U.S., there is an ETF $RSX. Here is a chart of the MICEX priced in US Dollars (instead of $RUB) compared with the ETF $RSX which is US Dollar denominated. You can see that $RSX does a good job: 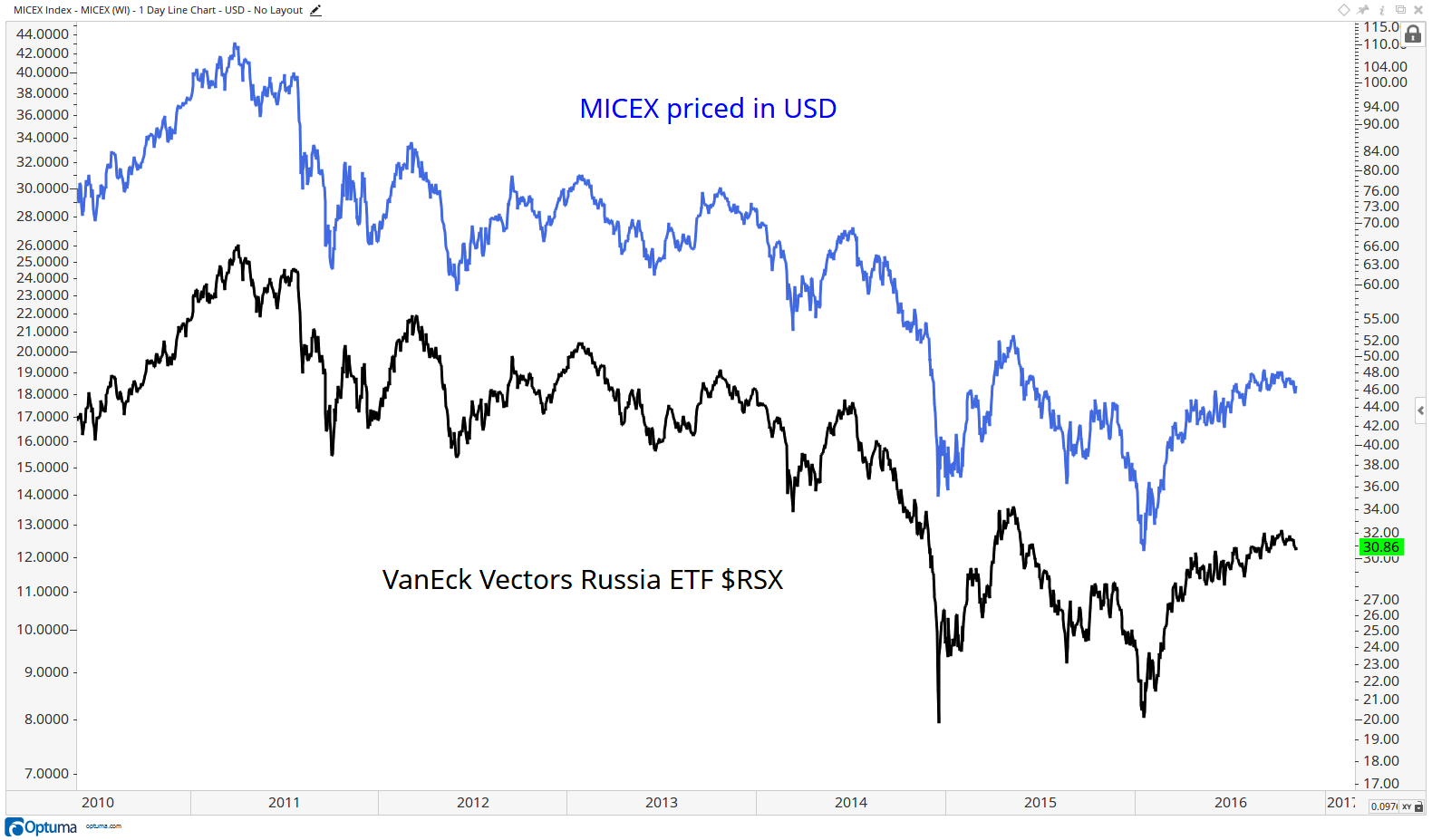 So breaking down the $RSX itself makes sense from an execution standpoint. I’ve been bullish Russia since the summer and I still think we buy dips. Short-term I think we get up to $21. If we’re above the November lows, I think we need to be long: 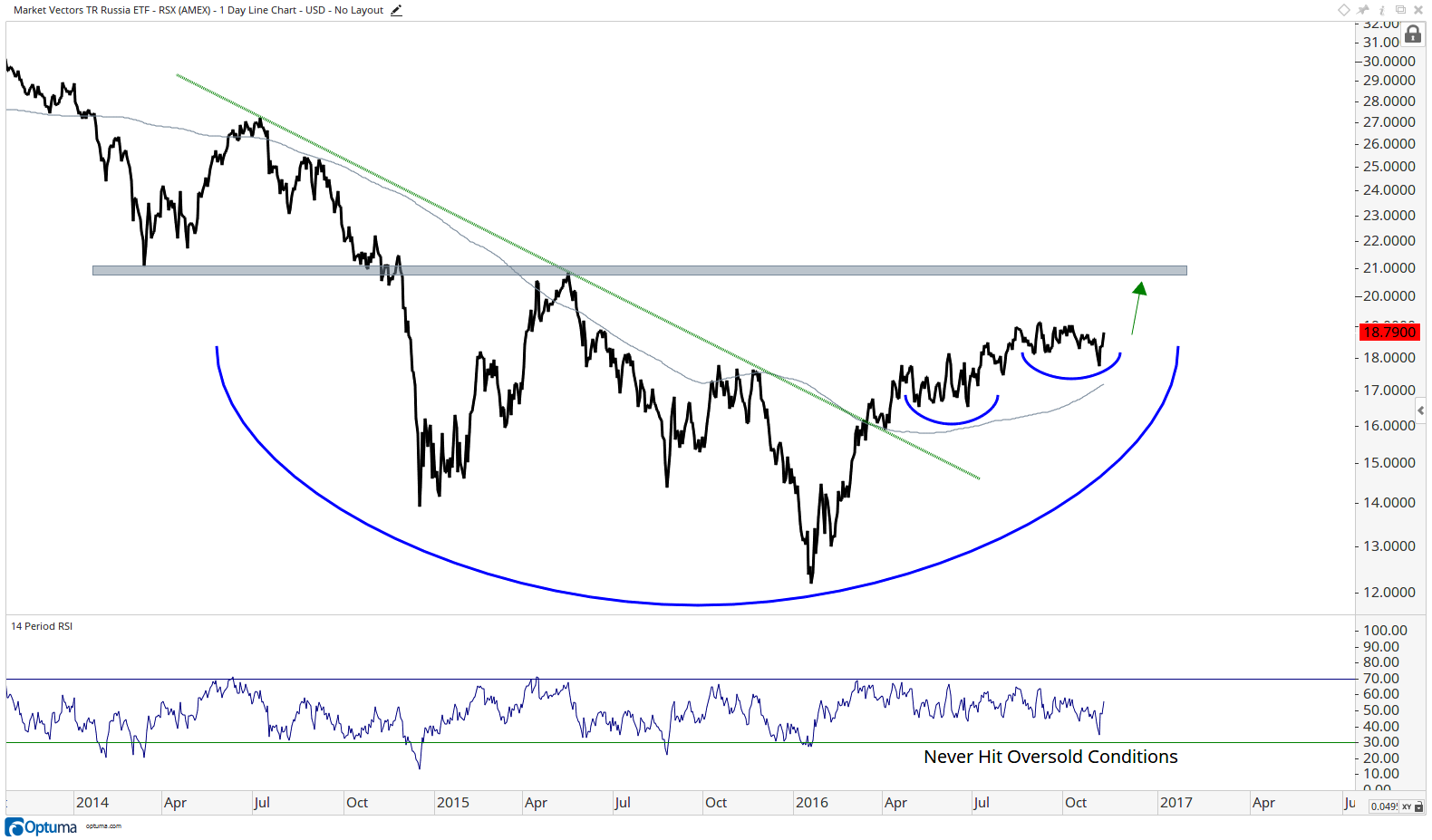 Here is what the Russian Ruble look like. It’s the exact same thing is the $RSX: 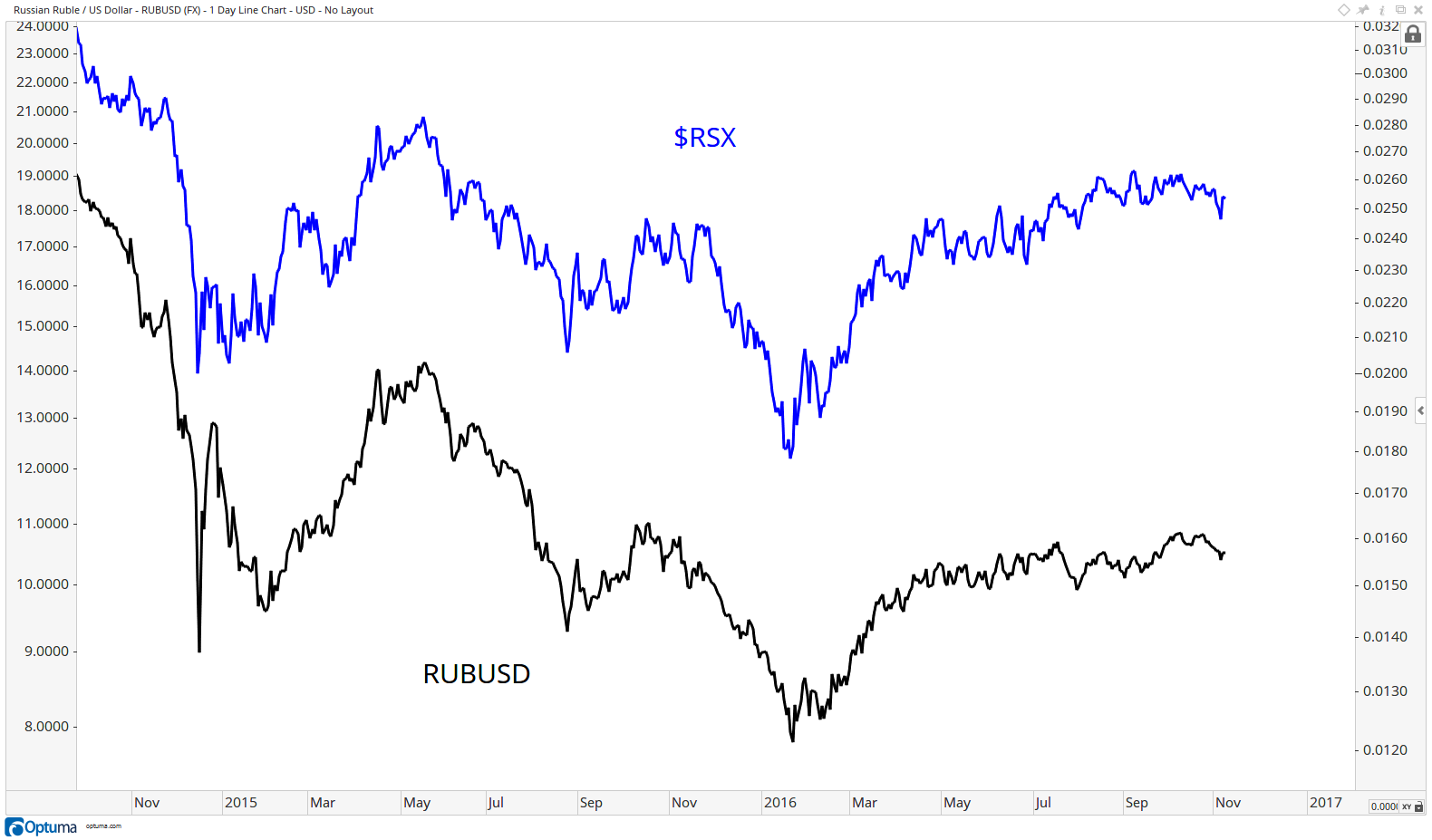 So if you’re going to be long Russia, I think we do so with the US Dollar as the denominator. I think if you’re investing in Russia, by owning it in Ruble you’re defeating the entire purpose of why you’re investing it in the first place. You think stocks go up and you think the currency goes up. So own the $RSX right? That’s how I think.

From an intermarket perspective, here is Russia relative to Emerging Markets. So in other words, $RSX / $EEM  to show the relative strength of Russia to its peers. This ratio is very highly correlated with Crude Oil as you can see here: 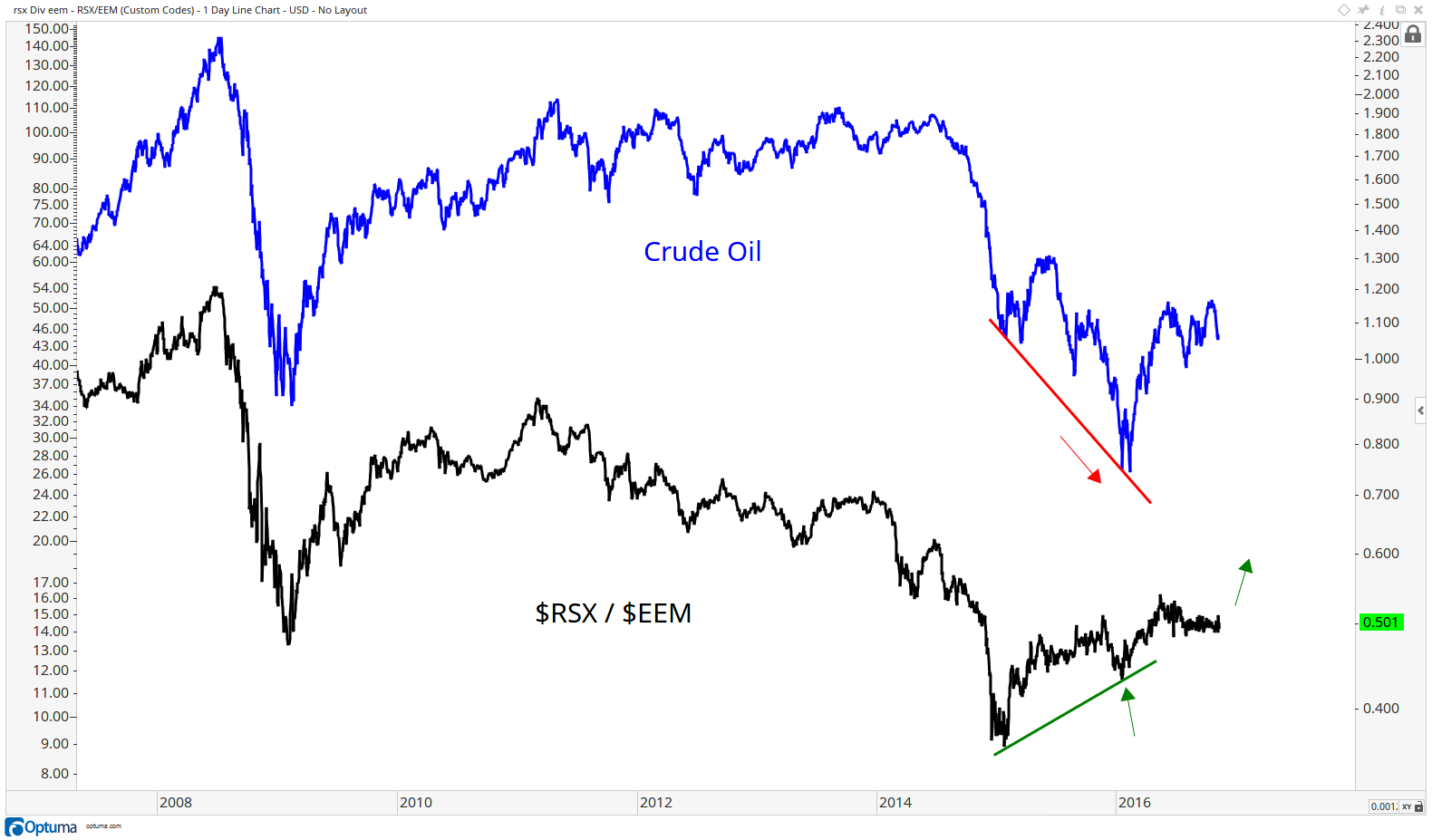 If you think Russia is going higher, both absolute and relative, I would argue this is also a positive catalyst for Crude Oil. Notice the lower low in Crude Oil earlier this year, but a higher low in the Russia relative to emerging markets chart. So if you’re going to be in one or the other, I’d prefer to be in the stronger one, which in this case is Russia over Crude Oil: 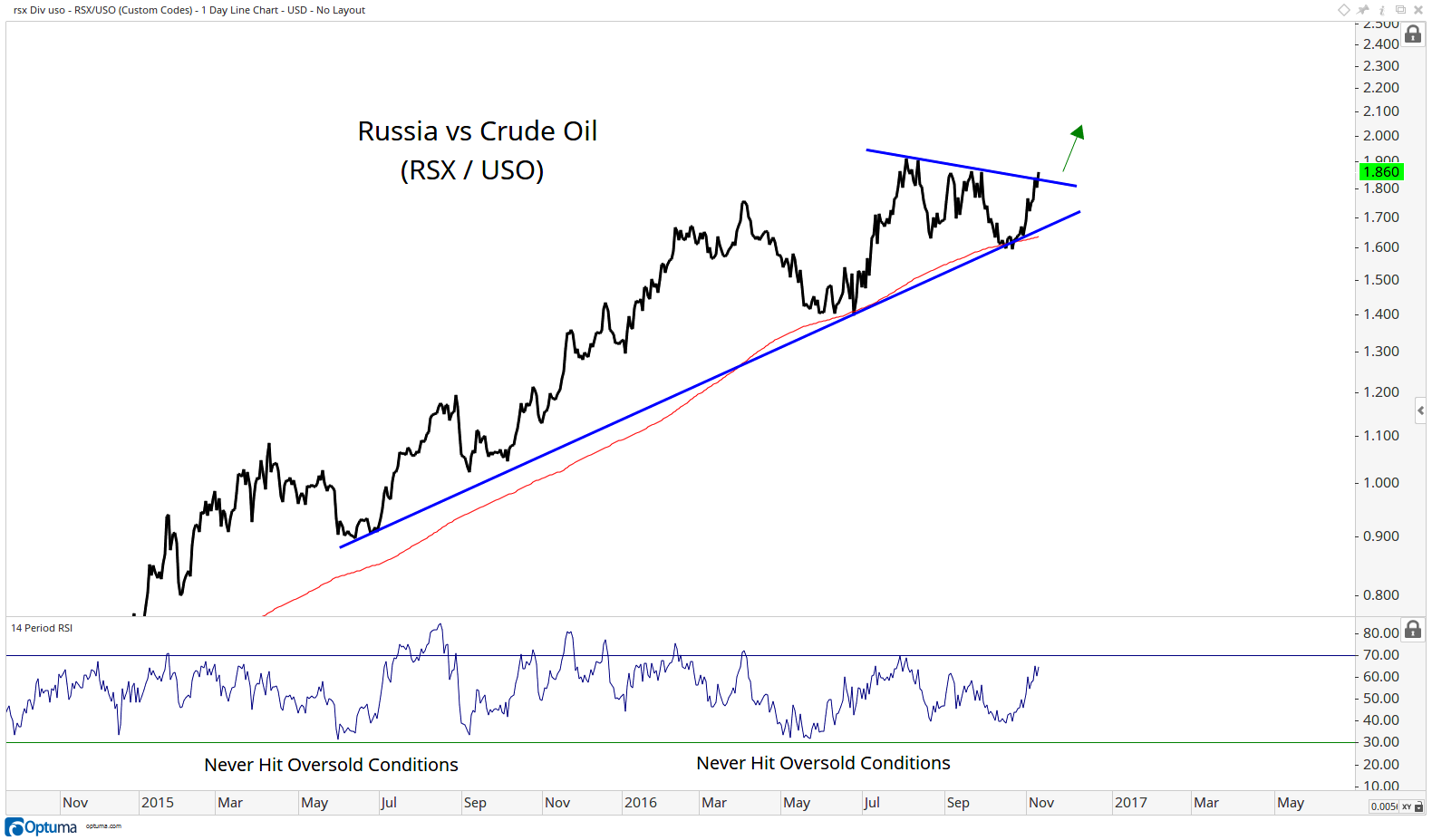 That’s how I see things in Russia. It’s the same top/down approach that I use for every single market in the entire world. I also do the same for sectors and individual stocks. The intermarket work really helps as well.

Click here to get weekly updates on the Russian charts above and the same top/down approach to the rest of the market.