There are many different ways to gauge the strength of the stock market. One of the most valuable is in the Russell3000, which represents approximately 98% of all investable assets in the U.S. equities market. This week, the value of that index was able to surpass its former high value from January. This comes after the Russell Small-cap Index and Russell-Micro-cap Index had already broken out in May.

The thesis here is that we’re just now starting a new leg higher for U.S. stocks. The Russell3000 Index is in a similar situation today as Technology was earlier this year. The risk was very well-defined and the upside was exponentially greater. The market implications were also incredibly important. The Tech stock charts at the time suggested buying them all year and that has, in turn, given us greater confidence in being long the market overall. This Russell3000 situation today is the same in a lot of ways. 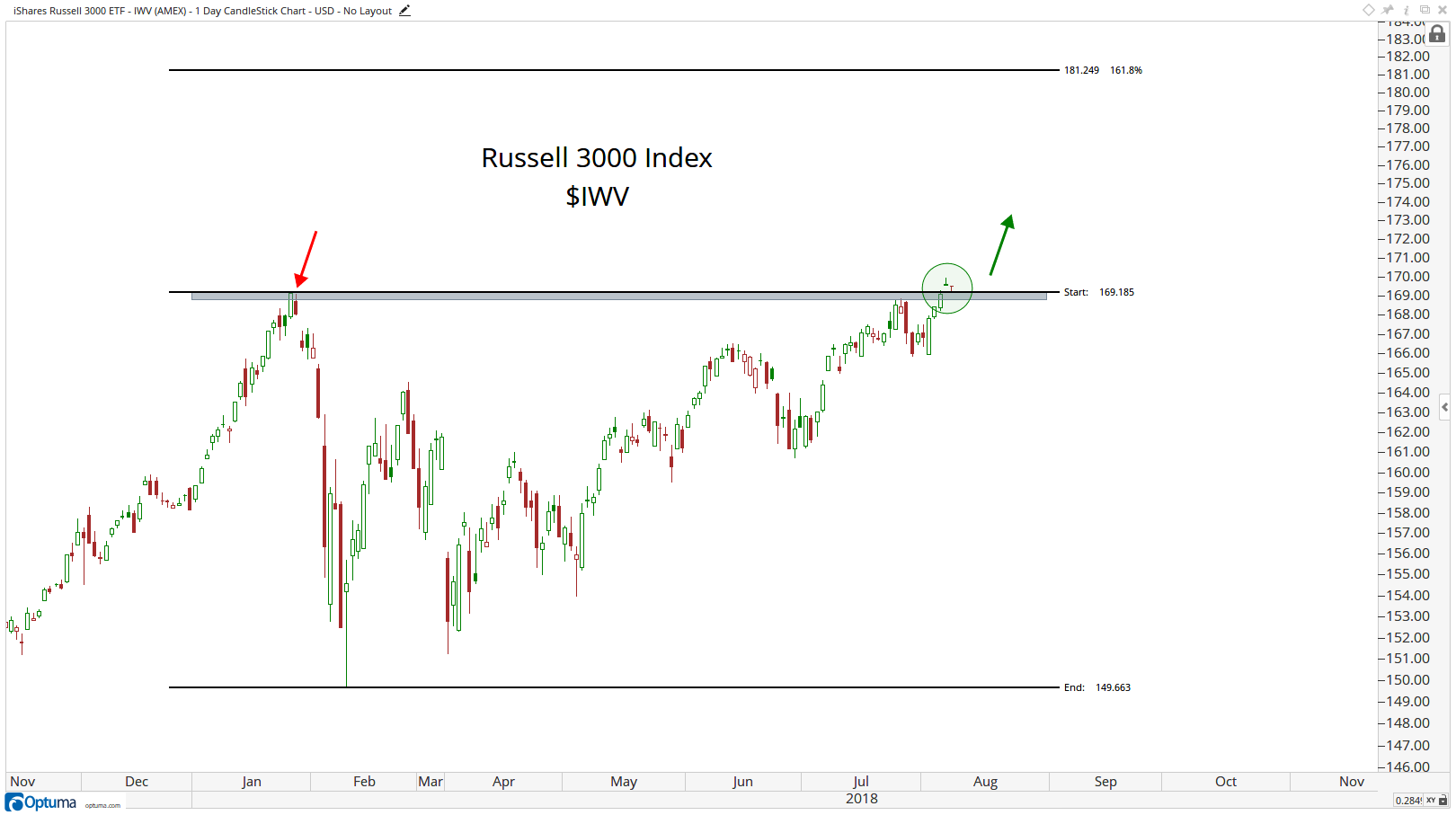 This gives us a target up above 181 based on the 161.8% extension of this entire January through August consolidation. So we’re looking at about 6.5% of upside here for the broadest measure of U.S. Stocks that I know of. In that scenario, I would expect higher beta stocks and other leading sectors to outperform in that sort of environment.

Another topic that has come up after these recent developments is that with new highs in the Index, we’re getting fewer stocks within the Russell3000 making new highs, which according to the Negative Nancies, means deteriorating market breadth. I am happy to counter that point with the simple fact that both the index and list of stocks making new highs are rising. In other words, we’re not yet finished with this move higher in stocks and we’re not yet finished seeing how many components participate in making new highs.

We won’t know until after the fact if fewer stocks made new highs on this move or if we got an expansion in participation. At this point, by suggesting that the fewer new highs points to deteriorating market breadth, you’re just assuming that this week was the high. Making those assumptions is a losing proposition if you’ve done even 5 minutes of homework on the history of the stock market.

But let’s just play along with the losers who’ve tried to pick a top and pretend that they’re right this time and we are indeed in an environment with weakening participation. The stock market, and a majority of the stocks within it, can continue to rally for months, even years, with fewer and fewer names participating to the upside. So even if it was true that breadth is deteriorating, which it is not, the market can still go up.

Finally, one other point I’d like to reiterate is that we have a very clear line in the sand with this thesis. If we are indeed starting a new leg higher in the market, the Russell3000 needs to be above those late January highs. Otherwise, we’re having a much different conversation.