I learned a long time ago from one of my early mentors, “Don’t Fight Papa Dow”. In other words, this is the most important index in the world. When someone asks you what the market did today, they’re wondering how the Dow Jones Industrial Average closed for the session. Some people would argue that the S&P500 is more important because it represents 500 stocks, rather than just 30 from in the Dow Industrials. But by that logic, the Russell3000 should be most important because it represents 98% of all investable assets in the U.S. equities market, and contains 3000 stocks. But most non-professionals don’t even know the Russell3000 exists. Also, if you overlay the Dow Jones Industrial Average over the S&P500, they move together.

If you get the Dow right, you’re likely to get the direction of S&Ps right as well: 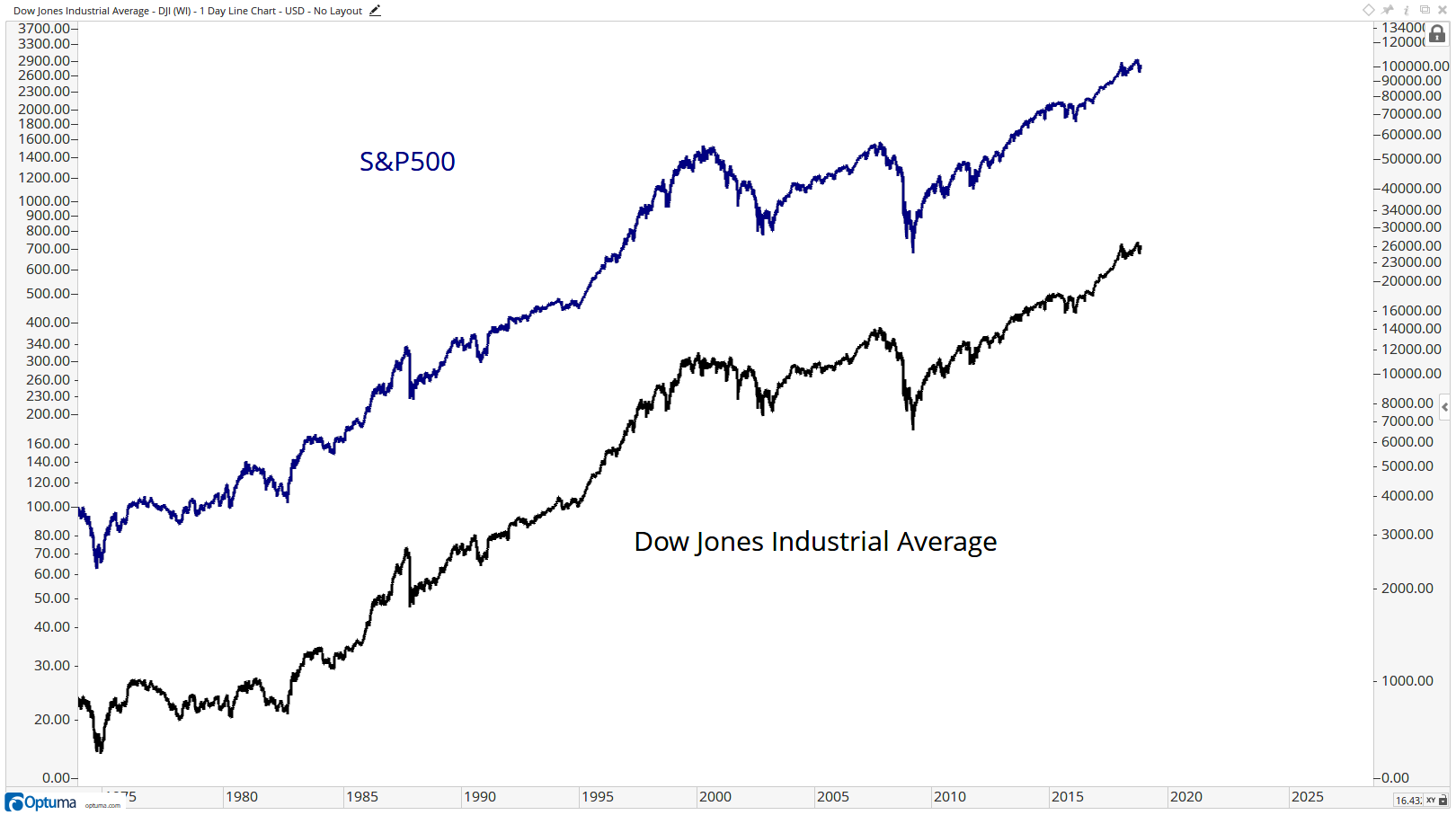 So with the Dow Jones Industrial Average reaching its upside objective this year, this is a perfectly logical place for a correction to begin. It didn’t mean it necessarily had to start from these levels, but it is indeed perfectly normal for it to occur from these prices. You can see here that this year’s highs represent a cluster of Fibonacci extensions from both the 2000 and the 2007 highs: 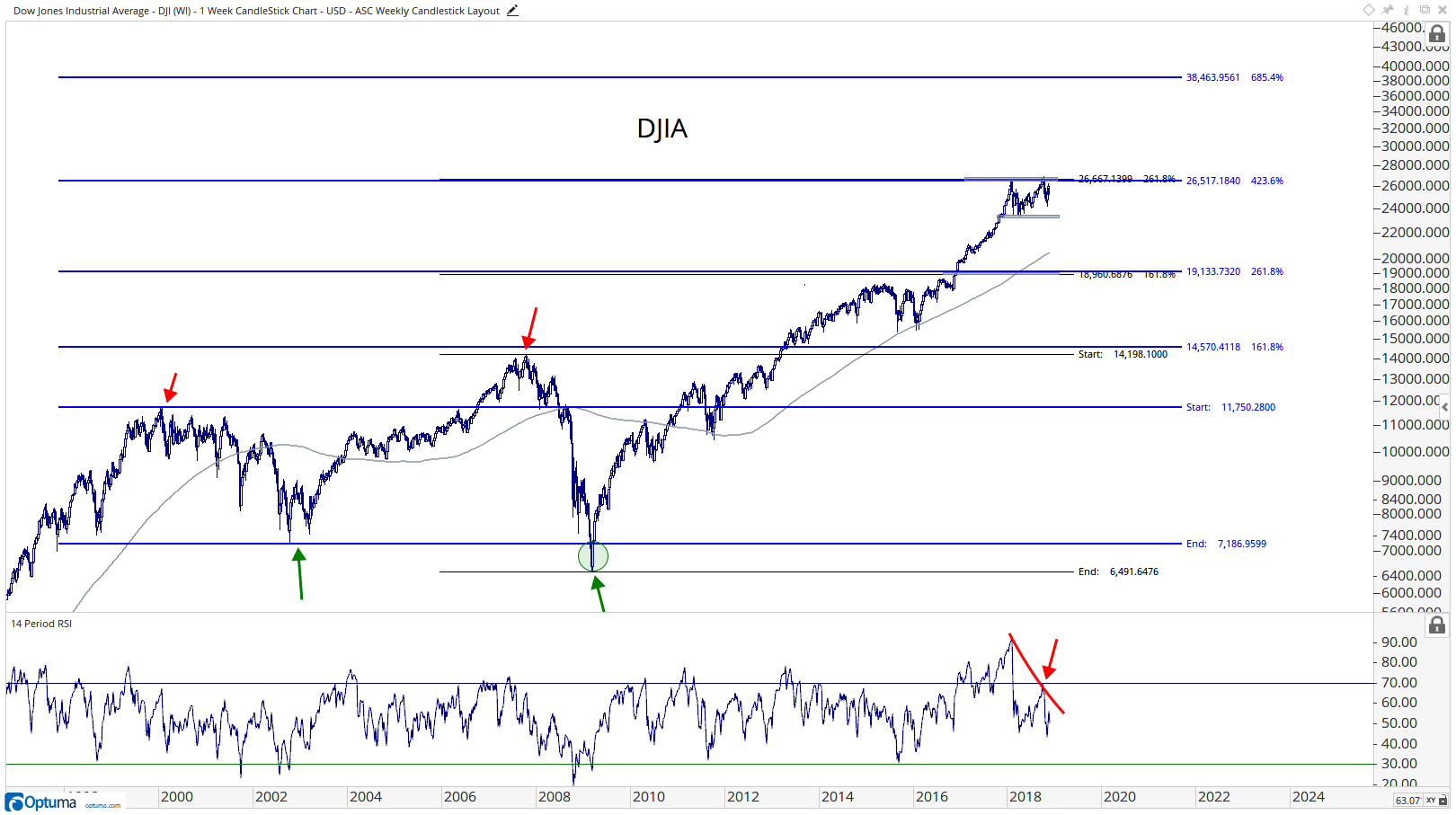 If we’re below that, there is clear evidence of overhead supply. In other words, there are overwhelmingly more sellers at these prices than buyers. The market has proven that. Here is a closer look at the Dow. This index has been, and still is, guilty until proven innocent. We’ve been in the camp that we’re either going to buy stocks at higher levels, once the market proves that the demand has absorbed all of this supply, or at much lower levels once the correction has run its course. The latter has been our base case, much lower levels, but as always we want to keep an open mind to all possible outcomes: 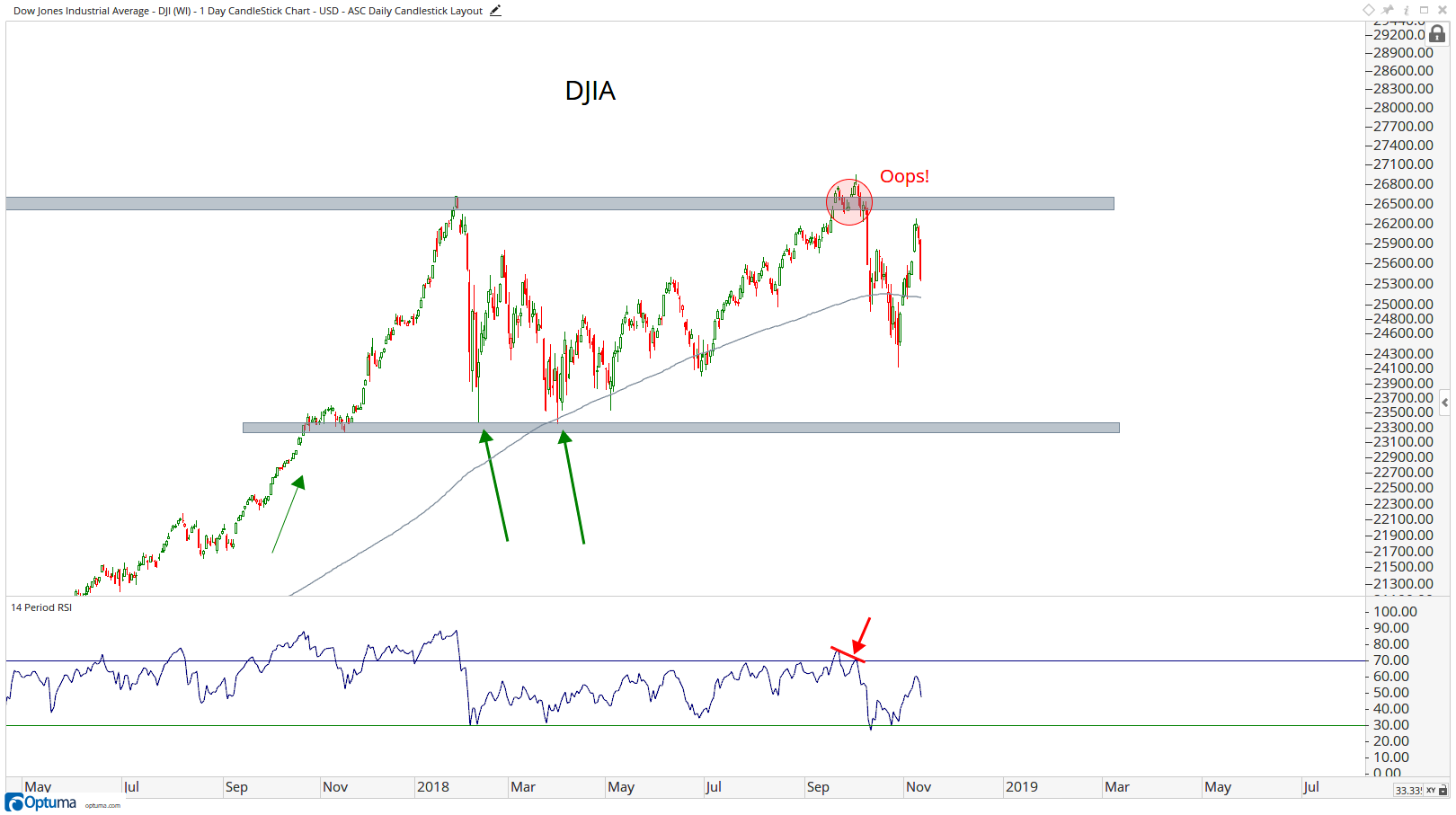 If we’re above 26,800 we can make an argument for a major breakout. I (still) believe that is the much lower probability outcome and new lows is most likely. We run our breadth numbers and the “market of stocks” is in much worse shape that the “stock market” indexes are suggesting. Even though we have not broken below the Q1 lows in the Dow, the list of stocks making new 52-week lows and number of stocks showing bearish momentum characteristics is much larger than when we were at those 2018 lows. In my opinion, the indexes are hiding the overwhelming weakness underneath the surface.

The Dow Jones Transportation Average finds itself in a similar predicament. It has also been the leader over this entire time. It peaked in late 2014, 6 months before the Dow Jones Industrials. It also bottomed in January of 2016, the month before its Industrial counterparts. And once again, in early October the Dow Industrials made new highs and the Dow Transports did not. This divergence has become customary at every major turning point over the last several years: 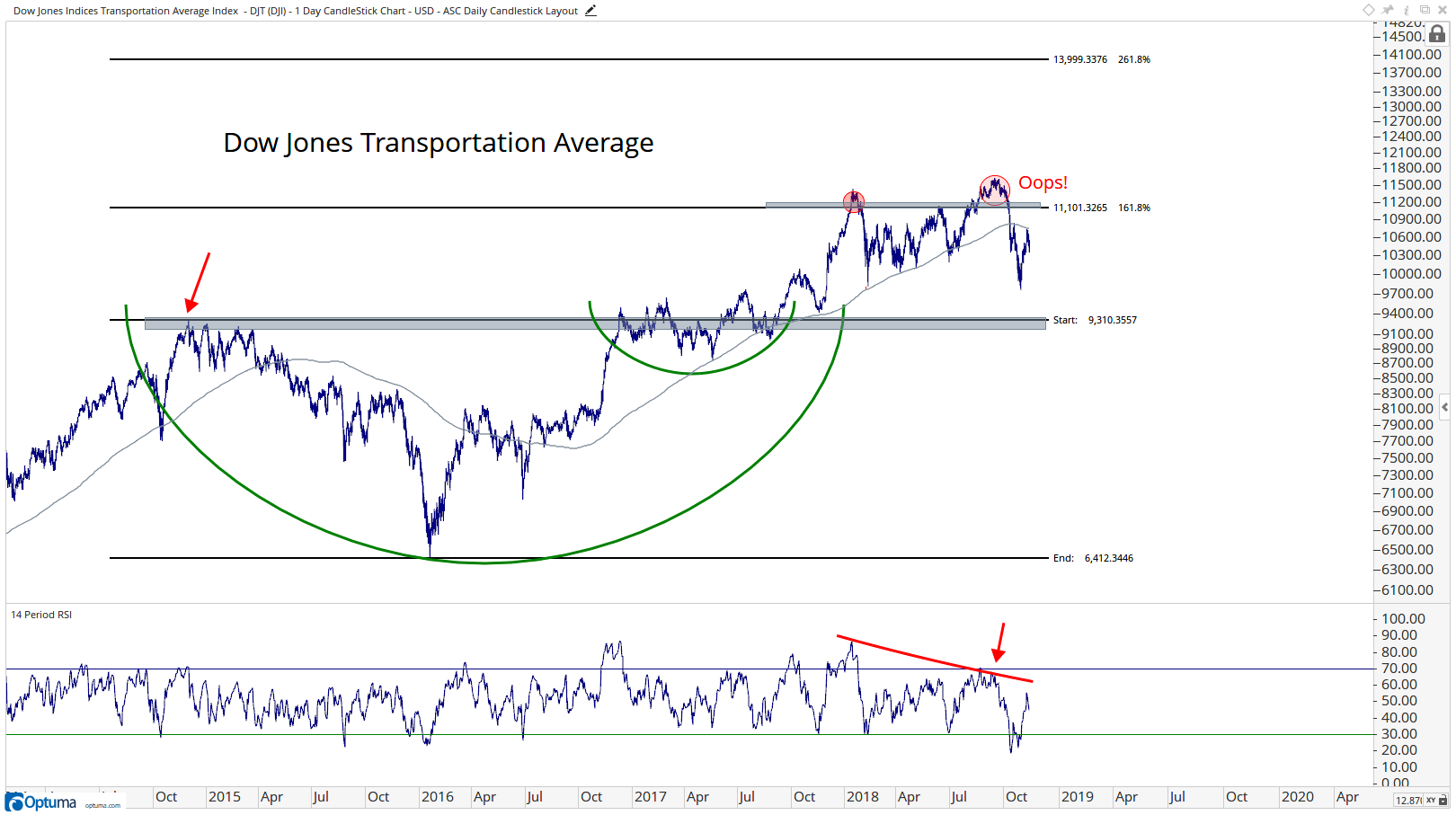 If we’re below 11,100 the higher probability outcome is that we see much lower prices. If 9300 holds, I think the bulls should consider themselves lucky. In all likelihood that breaks and we go much lower. We’ll see.

The one that looks the strongest of the three is the Dow Jones Utility Average. Think about it like this, when markets are strong and stocks are going higher, are Utilities the ones usually leading them? The answer is no. 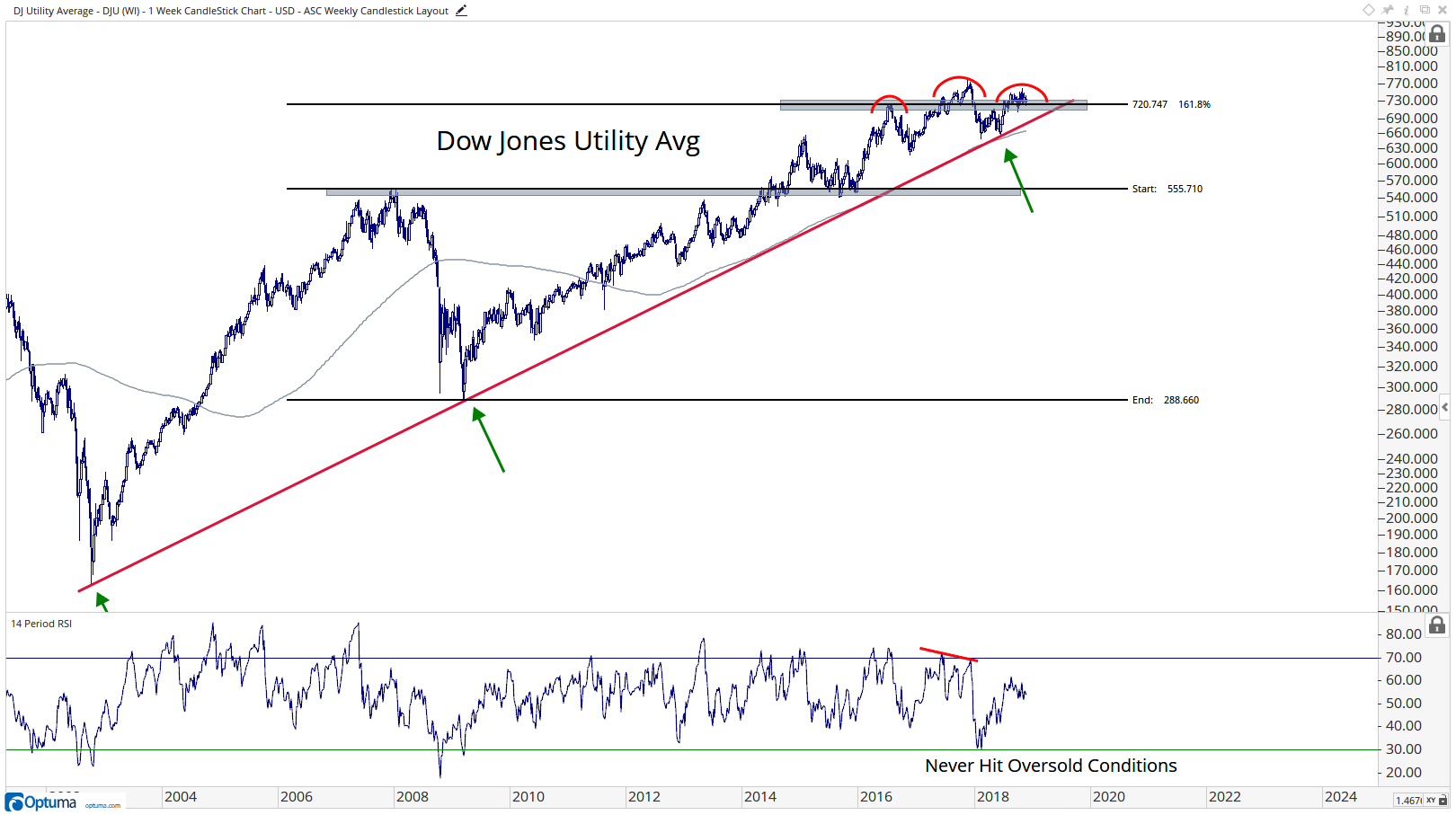 Premium Members can log in below to access the rest of the Indexes and key levels. Please login or start your risk-free 30 day trial today.