There’s always a tell. Before the most recent rally we’ve seen in U.S. stocks since August, Aerospace & Defense stocks were breaking out. It was hard to be bearish equities with this A&D group, an important part of the Industrials sector, and a leader among leaders, coming out of an 8-month base to new all-time highs. Also, this came within the context of a tremendous uptrend, so an upside resolution was perfectly normal. That breakout was telling for stocks as an asset class. Today I think it’s Technology. What this sector does here should tell us a lot about this market.

After the new weightings, Technology is going to represent 20% of the S&P500, which is still a large chunk, despite being cut from 26% of the S&P500 pre-adjustments. It’s funny, strong markets do splits, not reverse splits. I’ll take this as a positive for Tech. And if it’s not, then I think we have a problem. That’s what we’re looking at here today.

To be clear, I believe the higher probability outcome is an upside resolution in Technology and we then continue to march to new all-time highs. As always, however, we want to accept ahead of time that we’re wrong and find the circumstances that will prove us wrong. This consolidation we’re seeing in Tech, and more specifically in Semiconductors as an Industry Group, is a healthy normal consolidation within an ongoing uptrend. If it’s not, that’s where the problems start.

First, let’s put things in perspective. It took 18 years of absolutely no returns after the famous peak in March of 2000. We are just now breaking out of this multi-decade base. Not only do I not think we’re in the later innings here, our bet has been that we’re just getting started: 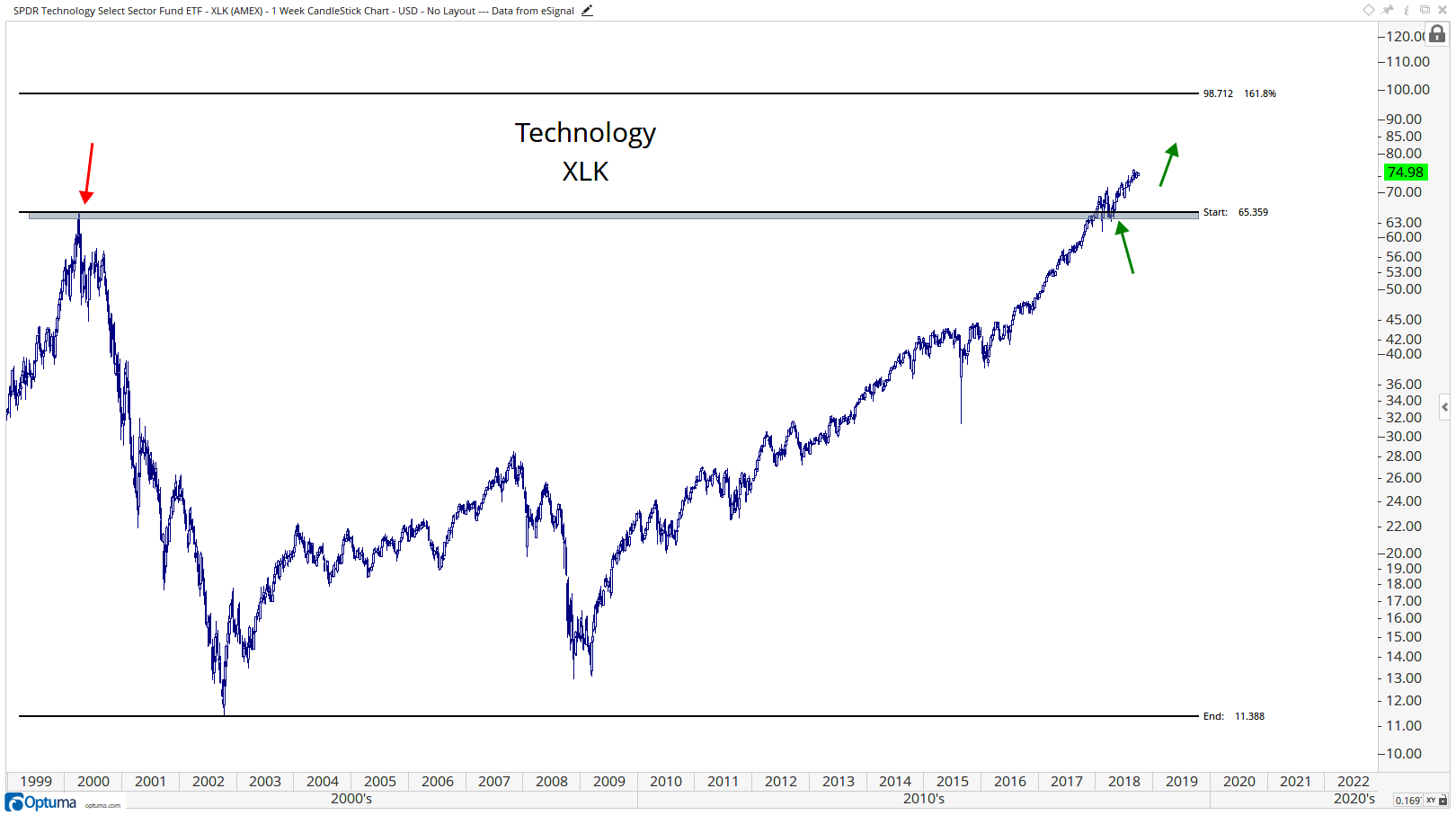 With that longer-term trend in context, here is a shorter-term look at Tech. This range over the past month looks perfectly normal and should resolve in the direction of the underlying trend. If we’re above 76 in $XLK it would be incredibly constructive for this space: 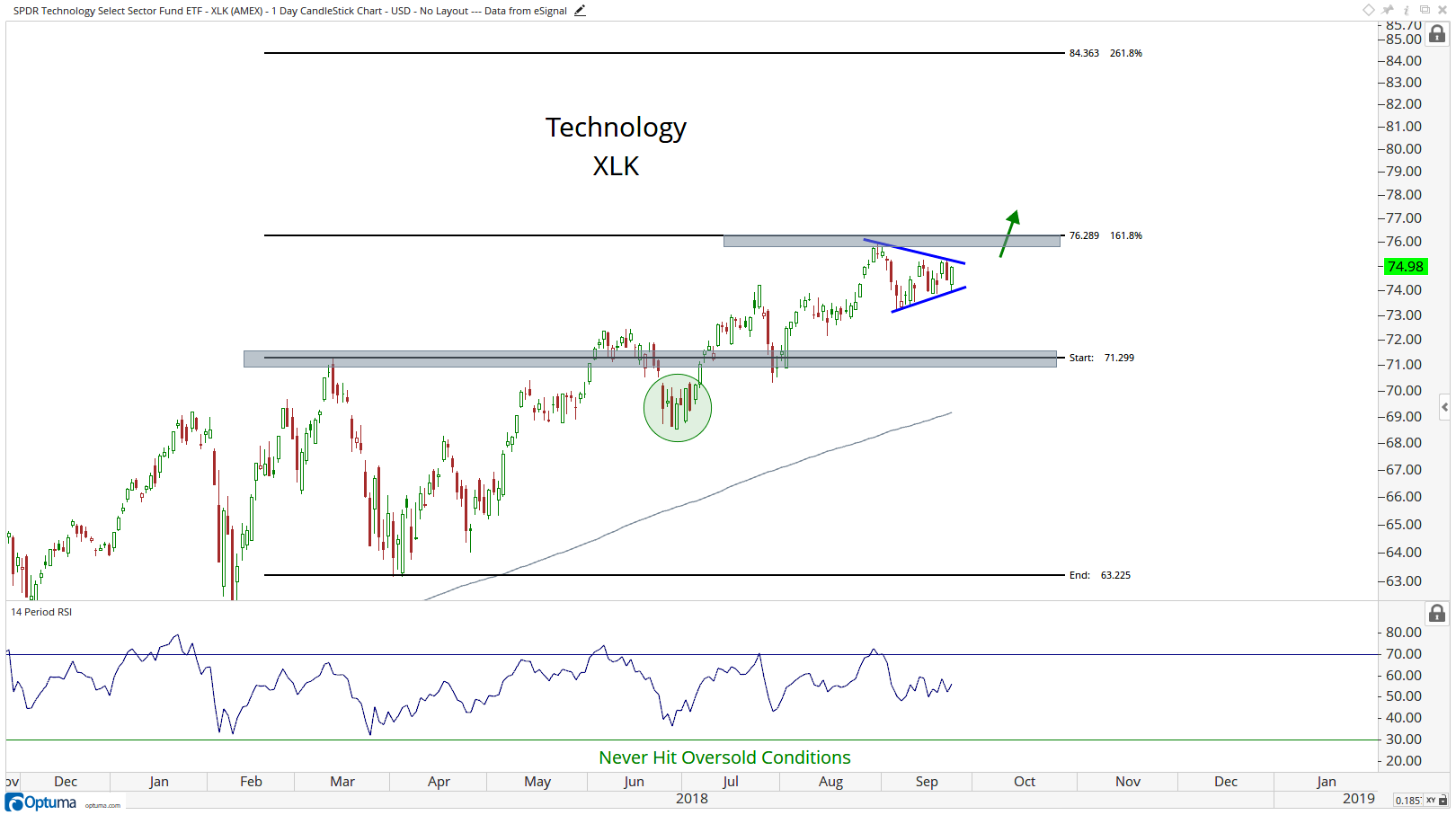 Here’s the big one we want to focus on: Semiconductors. Like Technology as a Sector Index, Semi’s have gone absolutely no where for 18 years, ever since that March 2000 peak. If we’re correct in our assessment, that yes, we are in fact just getting started, then this consolidation in Semi’s needs to resolve itself to the upside. A failure up here would create a big problem for America’s biggest sector: 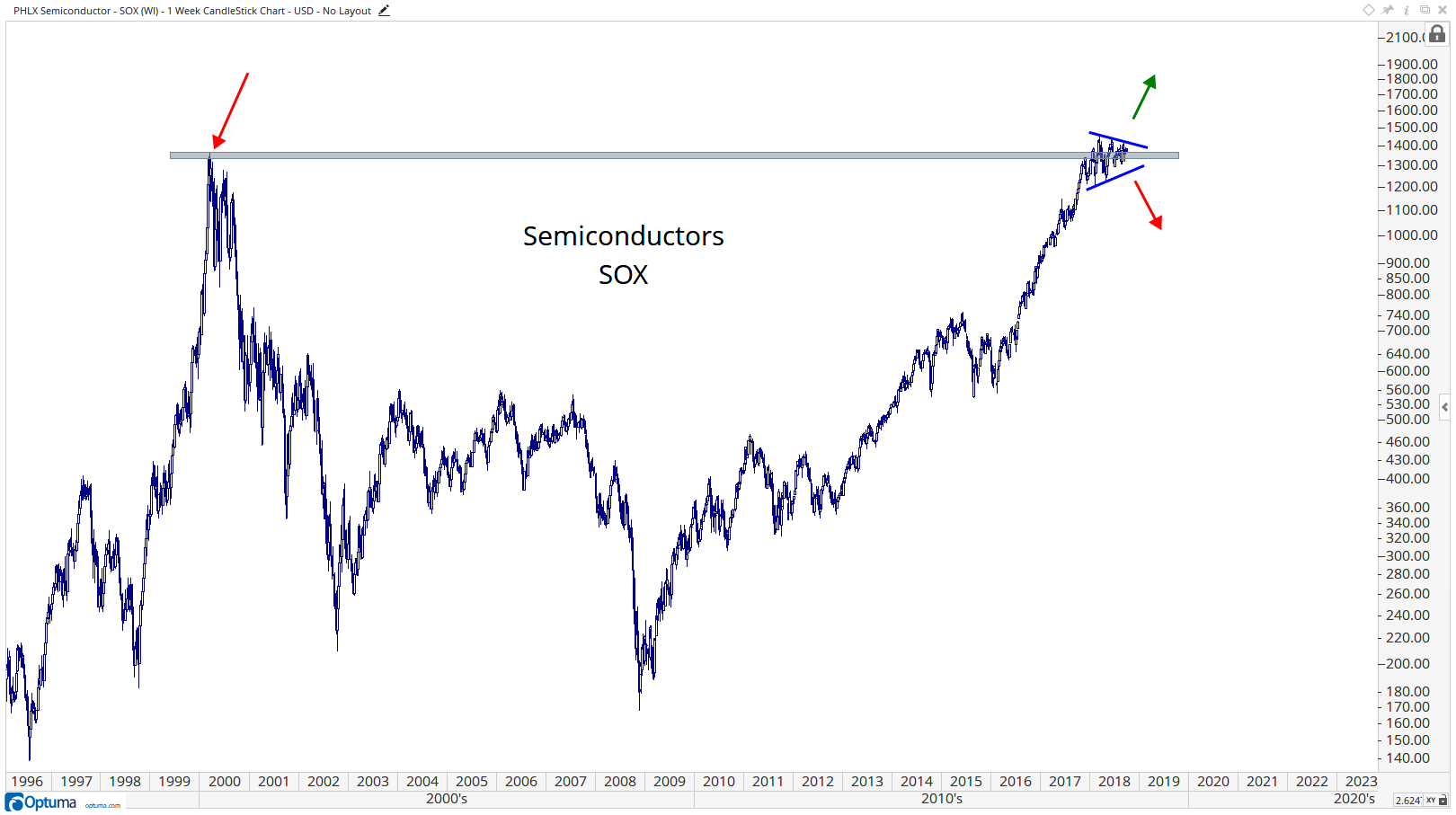 Here is a closer look at this consolidation in Semi’s over the past year. It’s not so much the pattern itself, but where it has developed that we’re most concerned with. We’re right near those March 2000 highs. The outcome here will be our tell for the direction of the next leg in Semi’s, and therefore Tech, and in my opinion, the overall U.S. Stock Market: 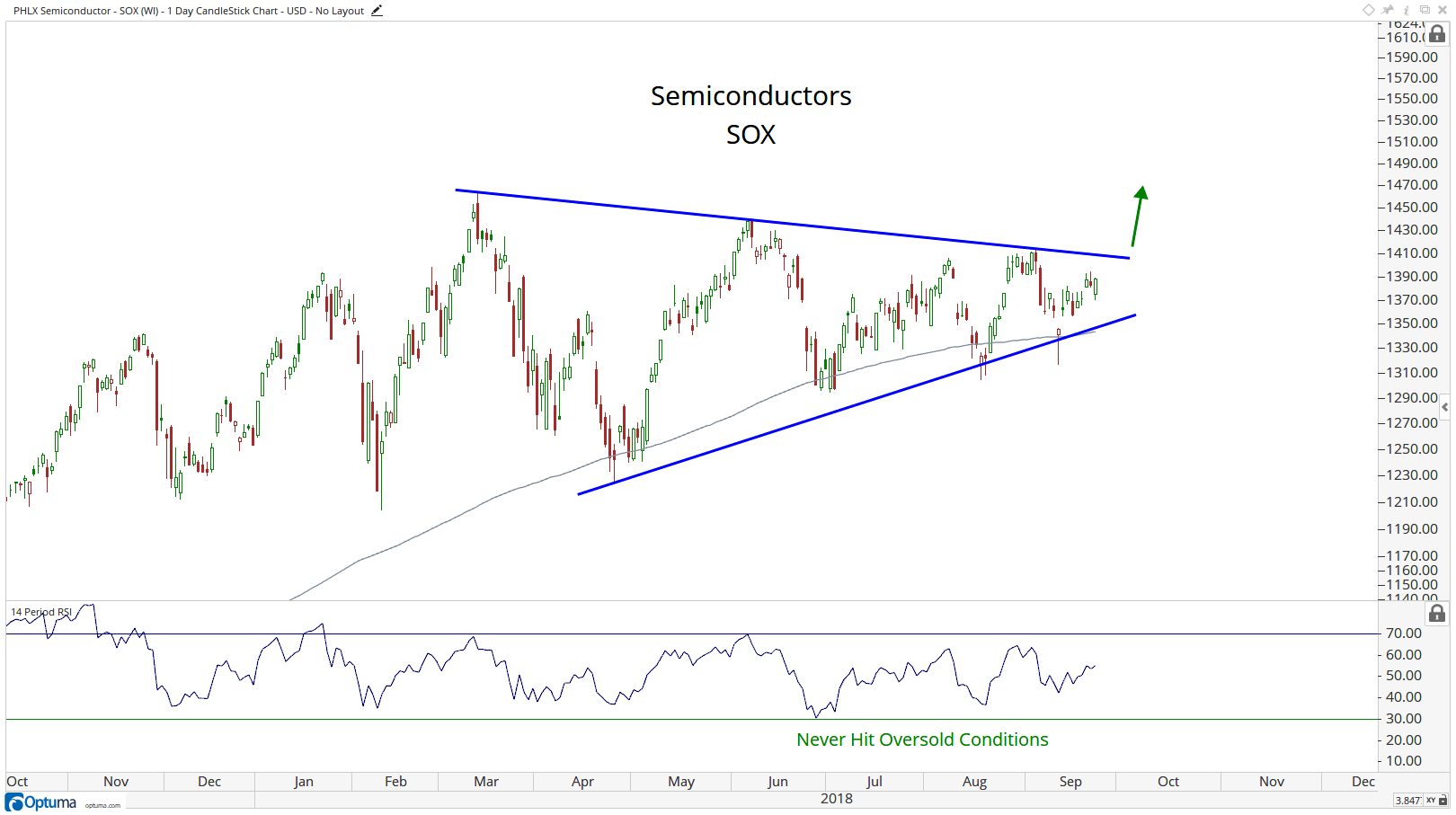 Taking out 1410 would be the first step in proving we’re getting an upside resolution. Weekly closes in the Semiconductor Index above 1432 would be even more conclusive. From a risk management standpoint, which is most important here, holding above 1300 is the big level. If we’re below that then I think we have bigger problems on our hands in Semi’s, and therefore Technology and the rest of the U.S. Stock Market.

Here’s the bear case. Does this range in Semi’s look like a massive top? 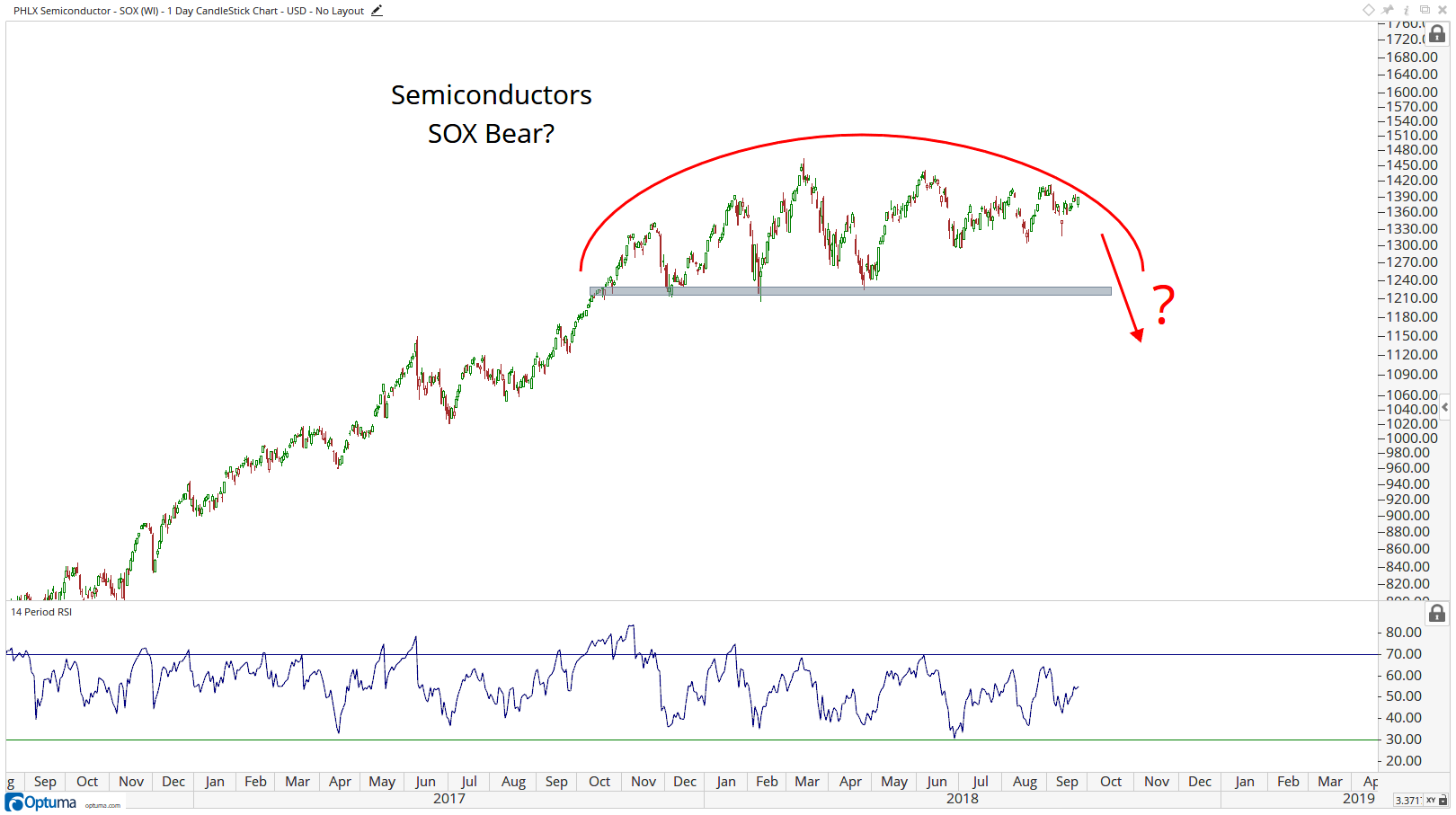 Or does this just look like a consolidation within an ongoing uptrend? I think this one here below is the higher probability outcome: 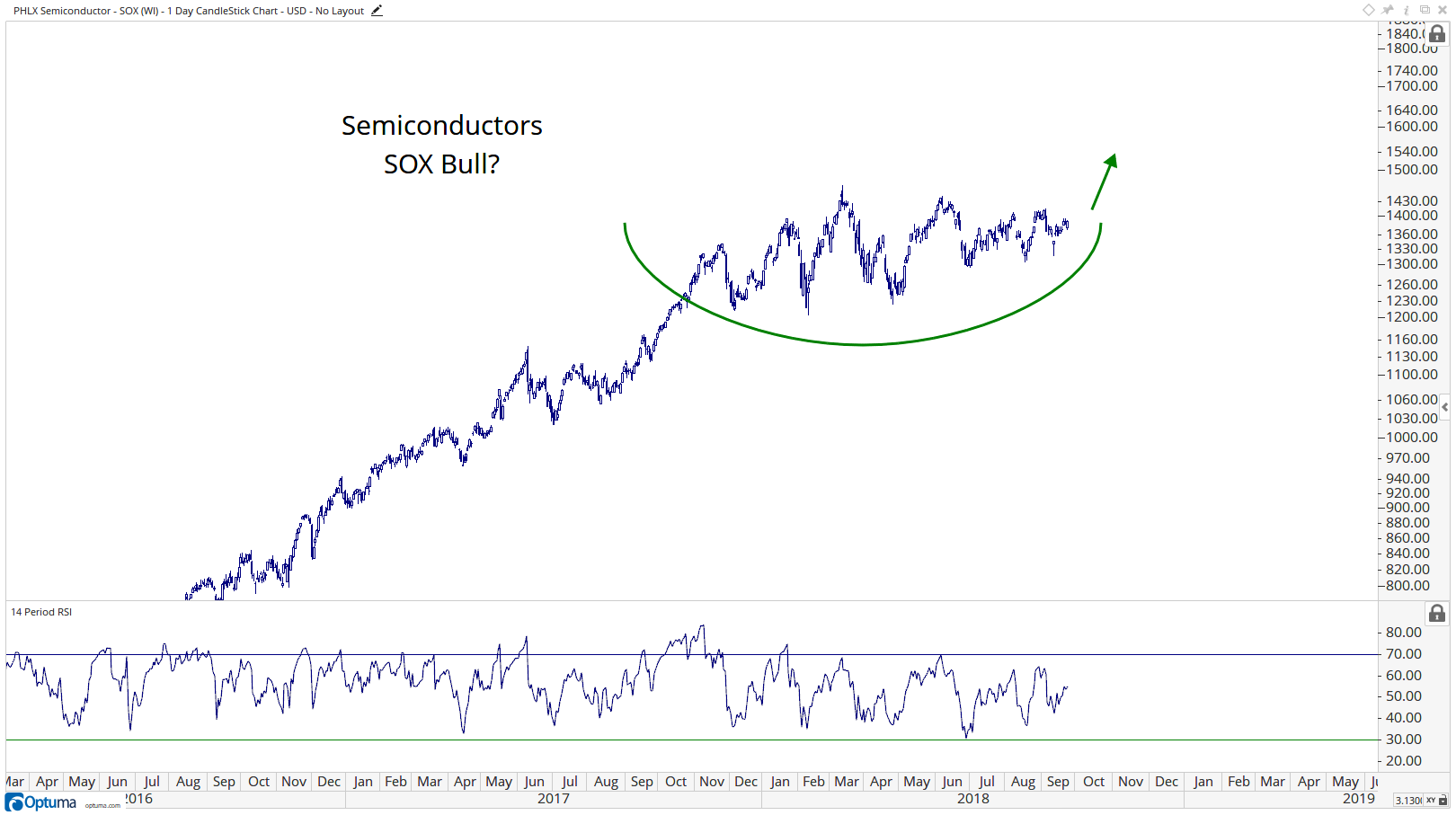 Now, on a relative basis is where things get interesting. To suggest this market is “overextended” or in its “late cycle” or any of that nonsense they’ve been feeding you, is just irresponsible in my opinion. Notice how on a relative basis, we’re no where near those March 2000 highs. In fact, we’ve barely retraced 38.2% of that entire decline. This also points to us just getting started and no where near the later innings.

This is the Semi’s vs S&P500 ratio in a range all year near some important retracement and extension levels. The resolution from this range will be very telling for the next direction of Semi’s and Tech (and therefore U.S. Stocks). New highs or new lows will be our tell. I think the higher probability outcome is new highs and then we resume the uptrend on both an absolute and relative basis: 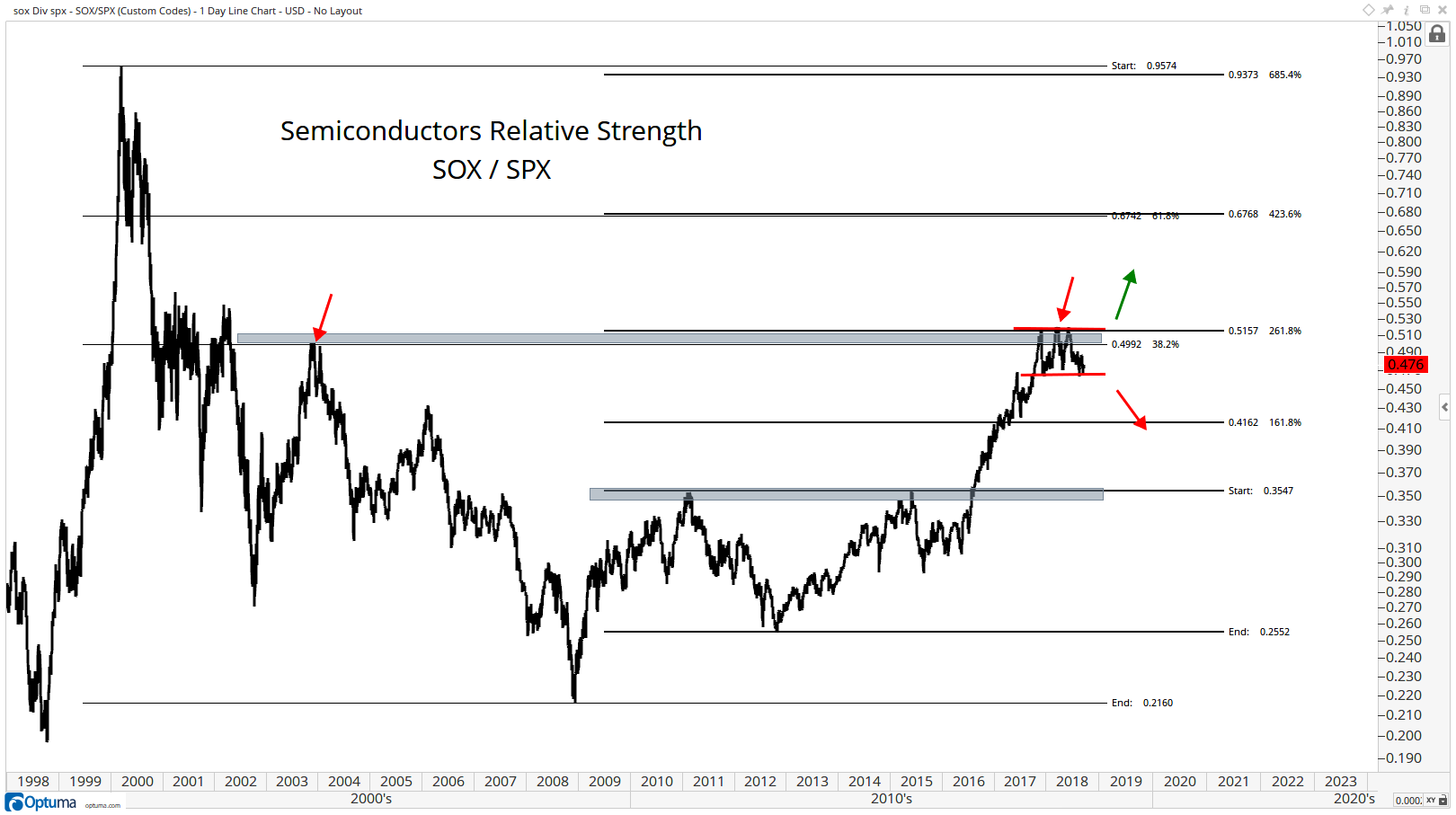 Here’s a closer look at the relative strength for Semi’s. The question is whether this is a massive top or whether we’re just near the lower end of the range. I think if it’s the latter (and I do think that), then Semi’s rip here on a relative basis which would take the price on an absolute basis though the upper end of the range and on to new all-time highs: 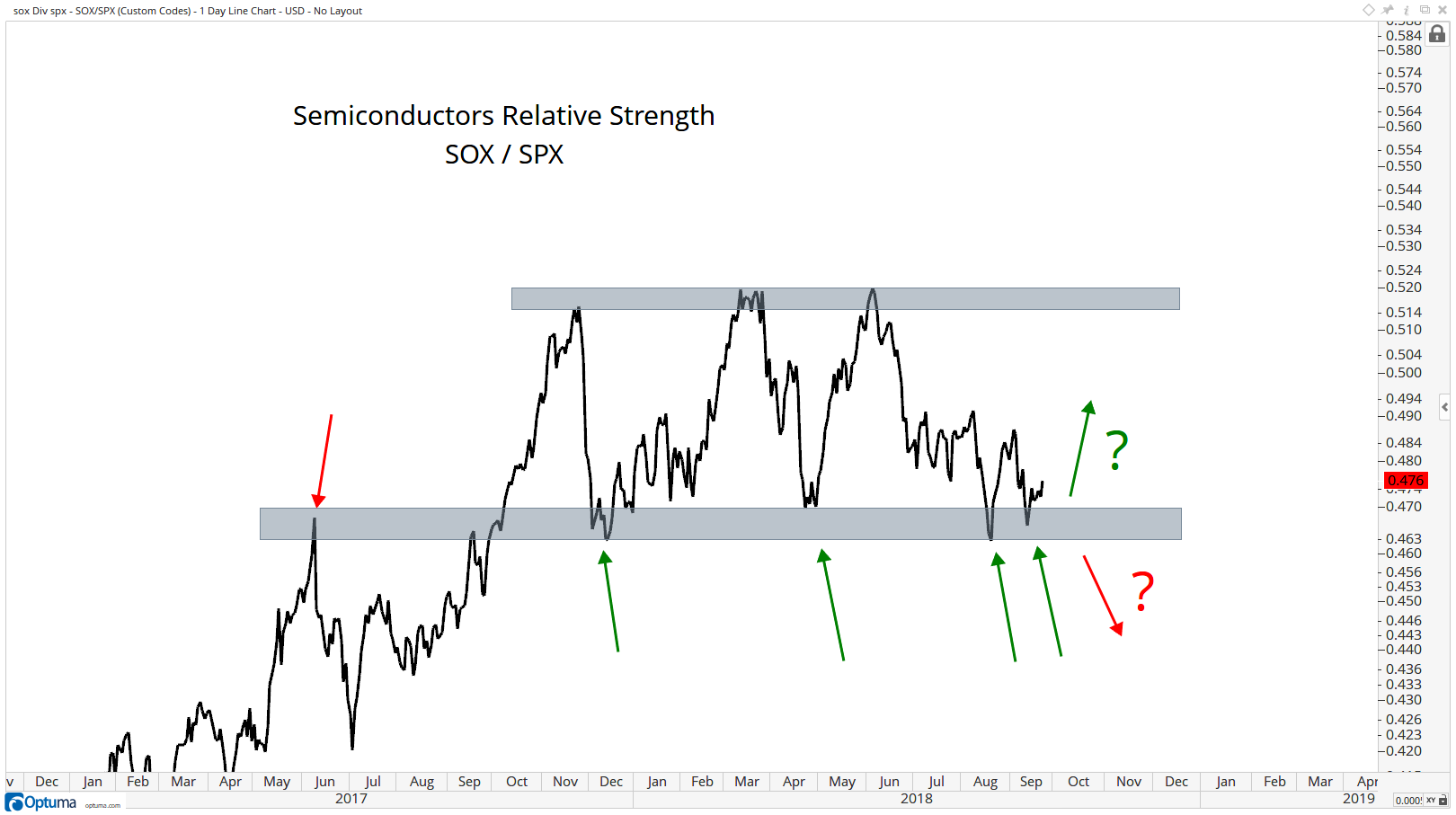 Here are the stocks that stand out from the group with the most attractive risk vs reward opportunities:

Premium Members can log in below to access the full list of Technology Stocks we want to be buying today. Please login or start your risk-free 30 day trial today.