We have been adamant about our view that we are in a rather messy environment. For this reason, we’ve been approaching markets with caution for months now.

Up until earlier this year when risk assets began consolidating in sideways patterns, it had been nothing but blue skies and new highs.

When the weather report is sunny, the water is calm, and the sky is clear, we know the weight of the evidence is with the bulls and we can focus our attention on finding the best opportunities in the strongest areas as ways to express our thesis.

But that’s just not where we find ourselves today. The current forecast is cloudy with a chance of rain. And it’s already been overcast for months!

And when the outlook is murky, as it is now, we want to take a step back and really weigh the evidence that’s in front of us. We need to stay up on incoming data points and monitor how markets react with so many charts currently at key levels of interest.

Luckily, we can use the fact that so many risk assets are at inflection points to our advantage, as each upside or downside resolution will bring us new bullish or bearish evidence, respectively.

We love making checklists to use as roadmaps during times like these. As such, we’ve put together a risk-on/risk-off scorecard whereby we list some of the most important charts and the corresponding levels we’re watching. We believe that how price resolves from these areas will hold crucial information as to the likely future direction for markets.

In this post, we’ll explore our new risk-on/risk-off checklist as well as reveal this week’s Mystery Chart, which just happens to be on our list!

And here it is… a daily chart showing the multi-year base breakout and retest from European Financials $EUFN.

Price is currently sitting on such an important level that we just covered this chart in our Key Takeaways post this week. The story here is pretty straightforward:

If European Banks drop back below former resistance near 20, international stocks are most likely under pressure. And if that’s the case, then the global growth and reflation narratives are probably running into some trouble too.

For now, this index is holding on for dear life as buyers appear to have successfully defended this level… at least thus far. Read our Mystery Chart post for more analysis.

Most responses we’re bullish or neutral, and we don’t disagree. There is no reason to overcomplicate this. If we’re above 20, this one’s for the bulls. If we break below it though, stocks are likely experiencing some turmoil.

Here’s a look at our full checklist: 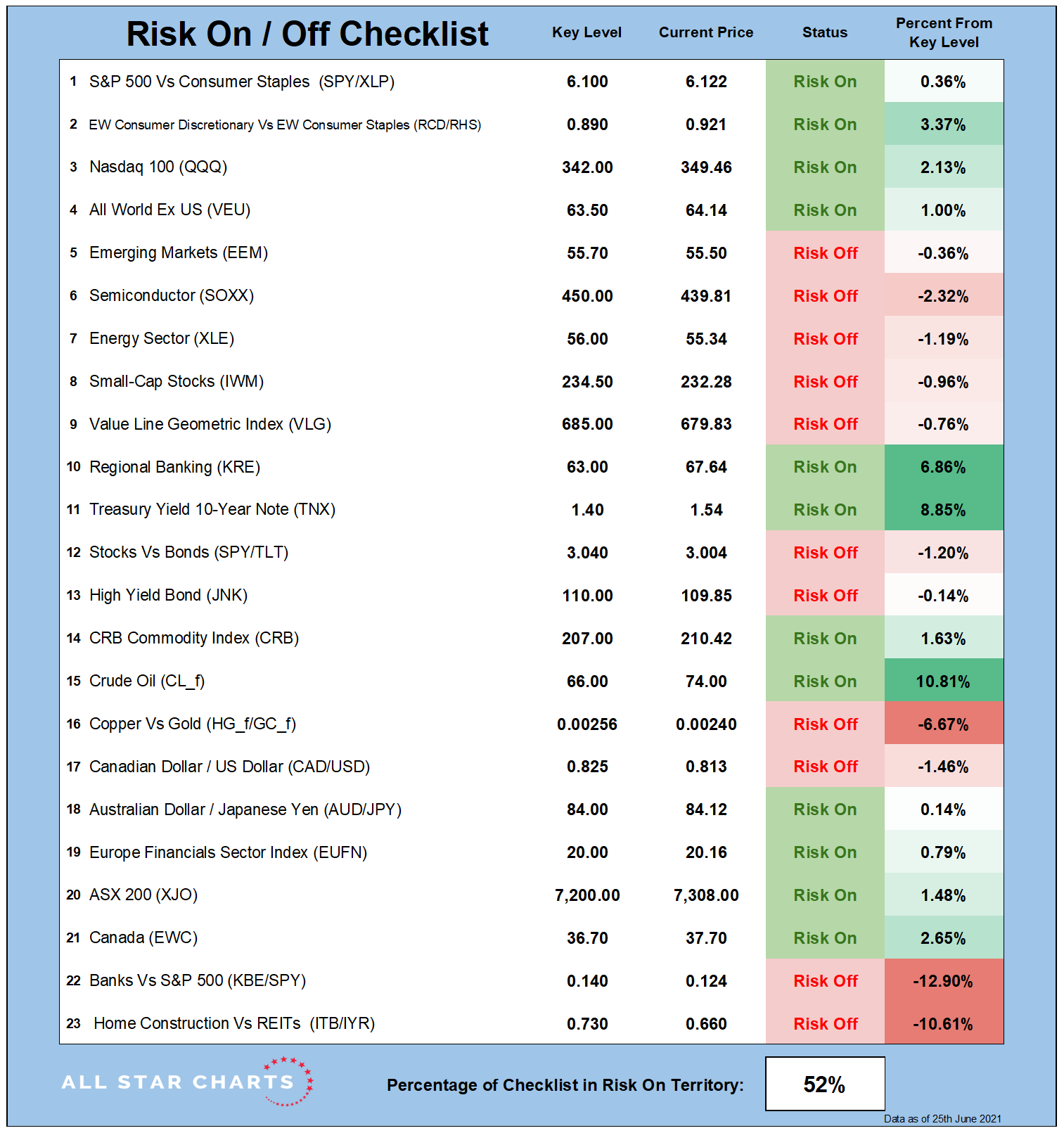 Coming into this week only about a quarter of our list was in “risk-on” territory. As of Friday’s close, over a majority of the charts on our checklist are now above their key levels. One week can make quite the difference… especially with so many major assets and risk ratios currently consolidating at pivotal areas of interest.

Another really important chart that we are watching for information right now is US Regional Banks $KRE. After all, it’s difficult to have a bull market without participation from Financials. JC discussed the importance of KRE holding above it’s Q1 pivot lows in a post this week and suggested the “market is likely in for a messy summer” if we lose this level.

For now, both US and European Financials are in the clear. This can change quickly though so we’re paying close attention.

Let’s look at one more international index that is currently in risk-off territory but could flip any day now as it’s currently trading just 20 cents beneath our key level of 55.70. Here’s a long-term view of the Emerging Markets ETF $EEM.

Can buyers reclaim those former record highs from 2007? It would be a major development for bulls and risk assets more broadly if they can.

Seeing as the All-Country World Ex-US Index $VEU just reclaimed its corresponding level at its pre-financial crisis highs around 63.50 this week, it wouldn’t surprise us to see EEM follow suit sooner rather than later.

Then again, VEU isn’t yet in the clear as it still faces some overhead supply at its recent record highs from earlier in the month just above 65. So we could just as well see both rollover in the coming days and weeks.

The bottom line is simply that the jury is still out when it comes to the future directional bias for stocks and other risk assets.

But the logic here is simple. Just like EEM and VEU are likely to resolve in the same direction, and the same is true for US and European Banks… This is actually the case for our entire checklist.

As more and more of these charts resolve higher, or in a risk-on direction, the higher the likelihood is that their peers will follow and do the same. On the other hand, if we start to see the percentage in risk-on territory deteriorate, which means more charts are violating their risk levels to the downside, we should anticipate others to do the same as well.

For now, it’s still cloudy out there. If and when more charts resolve upwards, the current fog over markets will start to subside and we’ll once again have some beautiful weather on our hands.

We continue to believe things will eventually resolve higher. The main question we’re asking is simply “WHEN?” It could be in the next few days, or it could take another 6 months.

It’s now summertime in the Northeast, the nicest time of the year. But down in Florida, we’re entering the heart of hurricane season and getting ready for some dark skies and rainy days.

So as we close out the first half of the year, what kind of weather do you think risk assets are in for in the coming weeks and months? Drop us a note and let us know!

As for us, things are still too mixed to make a directional call, but we’re confident this risk checklist will provide a good tell when the time comes.