Everything’s falling into place for the bulls.

Mid-caps and small-caps finally joined their large-cap peers at new record highs earlier this month. A bullish expansion in breadth is confirming these breakouts at the index level.

We’re also seeing strong confirmation in the form of other risk assets resolving above key levels of interest.

As suspected, our risk checklist has moved up to its highest level since we began tracking it this summer. This list does an excellent job summarizing the global landscape.

Here’s a look at where things stand presently: 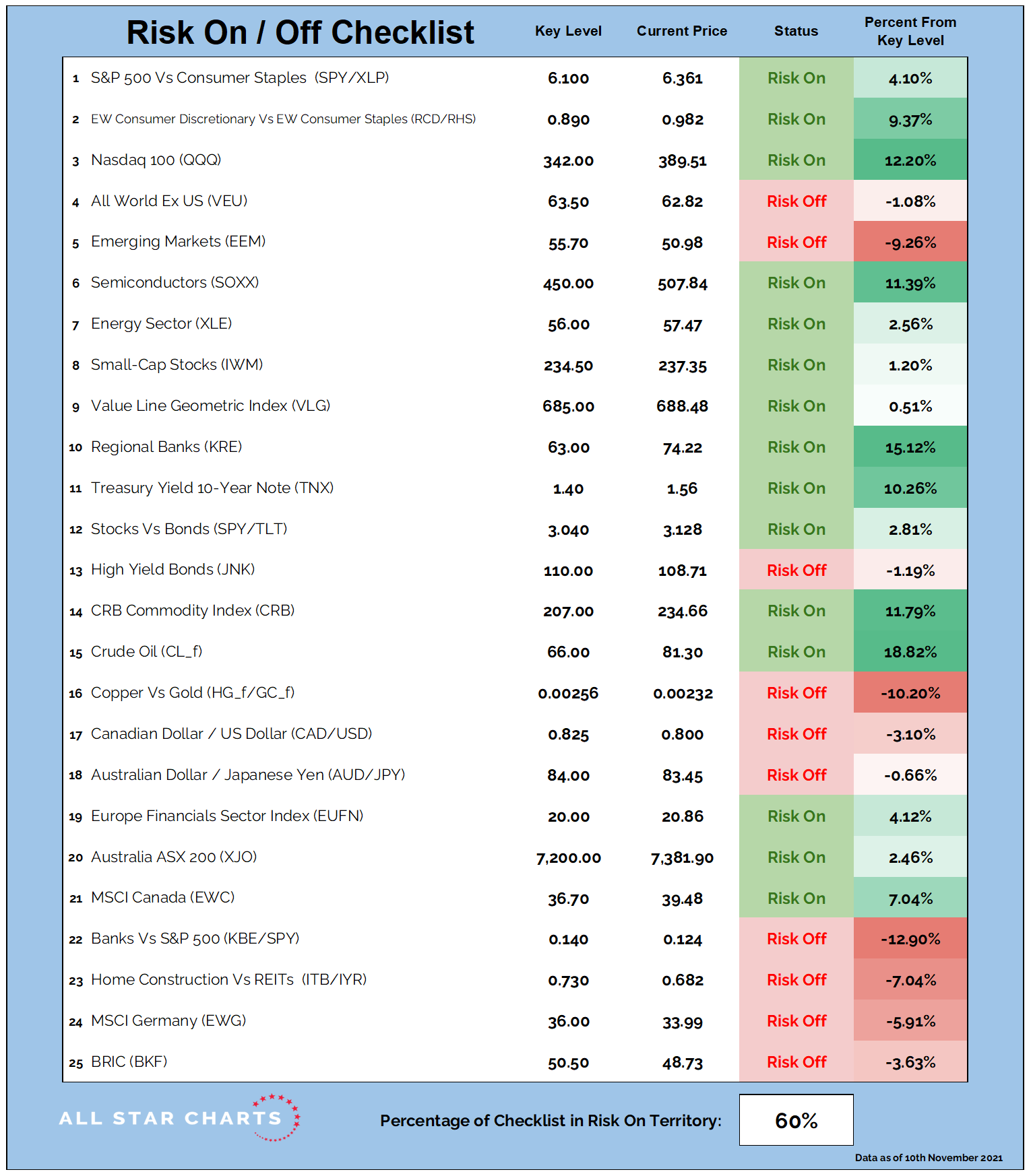 What we’ve done here is pinpoint critical levels in some of the most risk-on markets and relative ratios in order to gauge the current level of risk appetite.

Whether these charts are above or below our levels is information about how offensively investors are positioning themselves.

As of yesterday, our checklist shows a reading of 60% in favor of risk-on. It was at 68% earlier in the week and has held up well despite the brief bout of selling pressure.

This time series shows the percentage of our checklist in bullish territory along with an S&P 500 price chart in the upper pane. As you can see, bulls have taken control since the start of October.

Whether they continue to make progress, we’ll just have to wait and see. But it sure seems like we’re headed in that direction.

Let’s have a look at some charts that are currently trading right around our risk levels.

Where better to start than with the recent breakout from the Russell 2000 $IWM:

As long as we’re above those March highs around 234.50 this is a valid upside resolution and a big feather in the cap for the risk-on crowd.

Now let’s take a look at what we’re seeing outside of US equities. Similar to the Russell 2000, the FTSE All-Country World Ex-US Index $VEU has also been consolidating in a range since the first half of 2021. Here’s a zoomed-out, birds-eye view of the chart:

VEU has been chopping around our risk level of 63.50 ever since we began tracking this checklist. A sustained breakout from this range would put the index back at all-time highs and would be a major development for the bulls.

If this is happening, we’re likely to see other diversified international indexes — such as Emerging Markets and BRICS — take out their respective levels and flip to risk-on as well.

Next up is the Copper/Gold ratio, which recently fell back into risk-off territory after printing a nasty failed breakout above its 2018 highs around 0.00256:

This ratio looks like it’s headed back into its massive multi-year range. In an environment where interest rates and inflation expectations are trending higher, we’d definitely expect an upside resolution from Copper/Gold. Instead, we’re currently seeing the opposite. We’ve also seen yields slide lower along with this ratio the past few weeks. This is something we’re monitoring closely.

Now let’s look at some charts that are not on our checklist but very well could be. Copper on an absolute basis is as important a chart as anything these days! Here’s a look at the base metal battling it out at its former all-time highs from 2011:

If the Copper/Gold ratio and the other risk assets on our list are trending higher, we’d imagine Copper would be making new highs on absolute terms. And it’s probably happening before we’re seeing it in the ratio, so we can look to Dr. Copper for an early indication of things to come.

It’s not the end of the world for the Copper/Gold ratio to consolidate or even correct lower. But if we see Copper Futures resolve to the downside, it’s probably happening in an environment where many of the charts on our checklist are also violating their risk levels. This is simply not the environment we’re in right now, but we always want to stay open-minded to alternative outcomes and be mindful of any potentially bearish developments on the horizon.

The High Beta versus Low Volatility ratio pressing on new highs is a great example of something that’s the opposite of a bearish development. High-beta stocks outperformed during the strong up leg we experienced coming into 2021, and they look poised to reclaim a leadership role again. Here’s the chart:

High-beta stocks breaking out on absolute and relative terms is something we see in strong bull cycles as investors embrace some of the riskiest, highest-flying stocks. You know animal spirits are alive and well when high beta is outperforming. A breakout in this ratio would be another big one for the bulls, and we should know soon.

Another area we’re keeping a close eye on right now is Financials, banks in particular. All three major banking indexes — from the large money-center banks to regionals and even community banks — have recently resolved higher from their year-to-date continuation patterns. Here’s a look:

With the lackluster action from yields of late — especially the contraction from the long end of the curve — it’s important to see bank stocks remain resilient. They have thus far. But considering how close these indexes are to their breakout levels at the first-half highs, it won’t take much for these formations to turn into failed moves.

While this is surely not the bet we are making, it is definitely a possibility, and we need to remain open to it. Seeing these bank stocks undercut their pivot highs and fall back into their ranges could be the first shot across the bow in terms of trouble to come.

We haven’t seen it yet, and we very well may never see it. But if we do, we’re likely having a very different conversation.

We’ll worry about that when we need to. For now, there are a lot more reasons to buy risk assets than to sell them. And that’s exactly what we’re doing.

More charts are resolving higher and signaling an increasingly risk-on tone for markets. If the checklist keeps improving, it’s a safe bet that the broader market will continue to trend higher as well.

As long as this is the case, we want to be buying stocks and other risk assets aggressively.

Let us know what you think, and, as always, please reach out with any questions.