Most risk assets peaked during Q1 or May of this year and have consolidated in sideways ranges ever since.

But the bulls have started to take control of many of these trends. We’re seeing more and more upside resolutions — and this phenomenon isn’t limited to Crude Oil, Rates, AUD/JPY, and cyclical stocks. Similar patterns are also playing out when we look at intermarket ratios, particularly those we use to measure risk appetite.

In today’s post, we’ll dive into one of our favorite risk-appetite relationships and check for price confirmation in a variety of ratios.

First up is none other than large-cap consumer discretionary versus consumer staples stocks:

JC already wrote about the breakout in XLY/XLP this week, which you can read here.

The bottom line is this breakout is bullish for the broader market. Stocks are likely moving higher across the board if this ratio is trending higher.

Just look at the strong relationship between the S&P 500 and the XLY/XLP ratio.

Considering the importance of this development, let’s dig deeper and see what the relationship between discretionary and staples stocks is telling us when we look outside the large cap-weighted indexes.

This is the mid-cap discretionary versus mid-cap staples ratio:

While XLY/XLP has been ripping higher, this version of the ratio actually looks vulnerable here as it retests its old highs from 2013. Bulls want to see price dig in here and rebound higher.

Similar to the large-cap ratio, this has been moving sideways for the better part of 2021. Although similar to the mid-cap ratio, the recent performance has diverged as small-caps look a bit toppy here, retesting key pivot lows at the bottom of their range. But buyers are digging in and defending this level so far this week.

Even though the SMIDs ratios aren’t breaking higher with XLY/XLP, they are at least holding above critical support zones.

With that said, new highs from these ratios would be the best confirmation we could get for the breakout in XLY/XLP, so we’ll continue to monitor them closely.

It would be a major win for risk appetite to see all these ratios resolve higher in the diction of their primary trends.

Last but not least, here is the equal-weight version of consumer discretionary relative to consumer staples:

This ratio has also been a sideways mess over the past seven months. But similar to its large-cap counterpart, it recently resolved higher from its continuation pattern and looks poised for a fresh leg up.

As long as this ratio holds its April highs, it’s confirming the action in XLY/XLP and suggesting an increasingly risk-on tone for equities.

So for now, we have two ratios resolving higher and another two holding firm at support.

We definitely aren’t making the bet that these SMIDs ratios are going to resolve lower in an environment where the other two are rallying to new highs. In light of all the risk-on developments in recent weeks, we believe they’ll eventually catch higher to the other ratios.

That would be the ultimate confirmation for XLY/XLP.

But from a broader risk appetite perspective, we are already getting confirmation from other areas.

Here’s a look at our updated risk checklist: 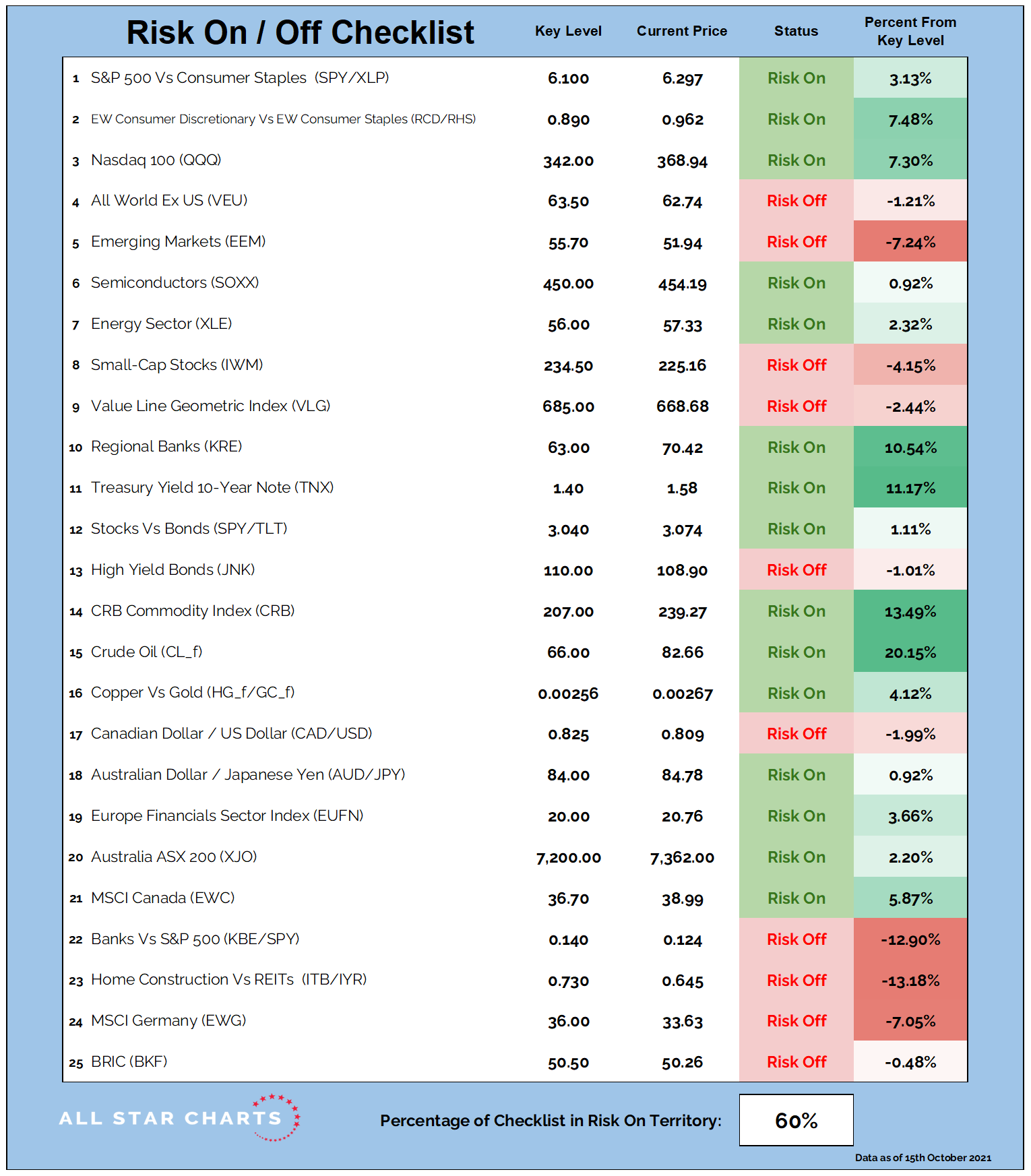 It’s at its highest level since we created it due to recent upside resolutions from things like energy stocks, European financials, and AUD/JPY. It’s also tipped in favor of the bulls due to some risk appetite ratios resolving higher, such as stocks versus bonds, copper versus gold, and discretionary versus staples. All of this has taken place in the past several weeks.

As previously discussed, we’re seeing these ratios resolve in favor of more offensive assets, which makes sense in an environment where investors are embracing higher levels of risk.

As long as this checklist keeps moving in the direction of risk-on, we think it’s a safe bet that XLY/XLP and these other ratios are moving higher as well.

And if this is going to be the case, we want to be buying stocks and other risk assets. It’s that simple.

Let us know what you think and as always, please reach out with any questions.