On Tuesday night we held our November Monthly Conference Call, which Premium Members can access and re-watch here.

In this post, we’ll summarize it by highlighting five of the most important charts and/or themes we covered, along with commentary on each.

1. Offense Is on the Field

As technicians, we love to talk about Dow theory. One of our favorite tenets is the price action of the Dow Jones Transportation Average confirming that of the Dow Jones Industrial Average.

We’ve updated this critical component of Dow theory to also include the PHLX Semiconductor Index, as these companies are as important as anything to the modern-day economy. Seeing both semiconductors and transports at new highs is about as good as it gets with respect to confirmation for the new highs in the S&P 500.

And that’s exactly the kind of environment we’re in right now. The stock market is clicking on all cylinders, and this chart simply enforces our view that investors are on offense right now.

That means one thing for us — we need to be calling offensive plays!

When analyzing sentiment the key is to not overthink it. We’re most concerned with sentiment readings when they’re at extremes. When they’re not at extremes, they tend to carry little weight in determining our present outlook.

The chart below is a great example of a sentiment reading that’s back in no-man’s land. Not long ago, the number of bears in the Investors Intelligence poll was at its highest level all year. With this bullish sentiment condition as a backdrop, we saw many major averages such as small- and mid-caps finally resolve to fresh highs. 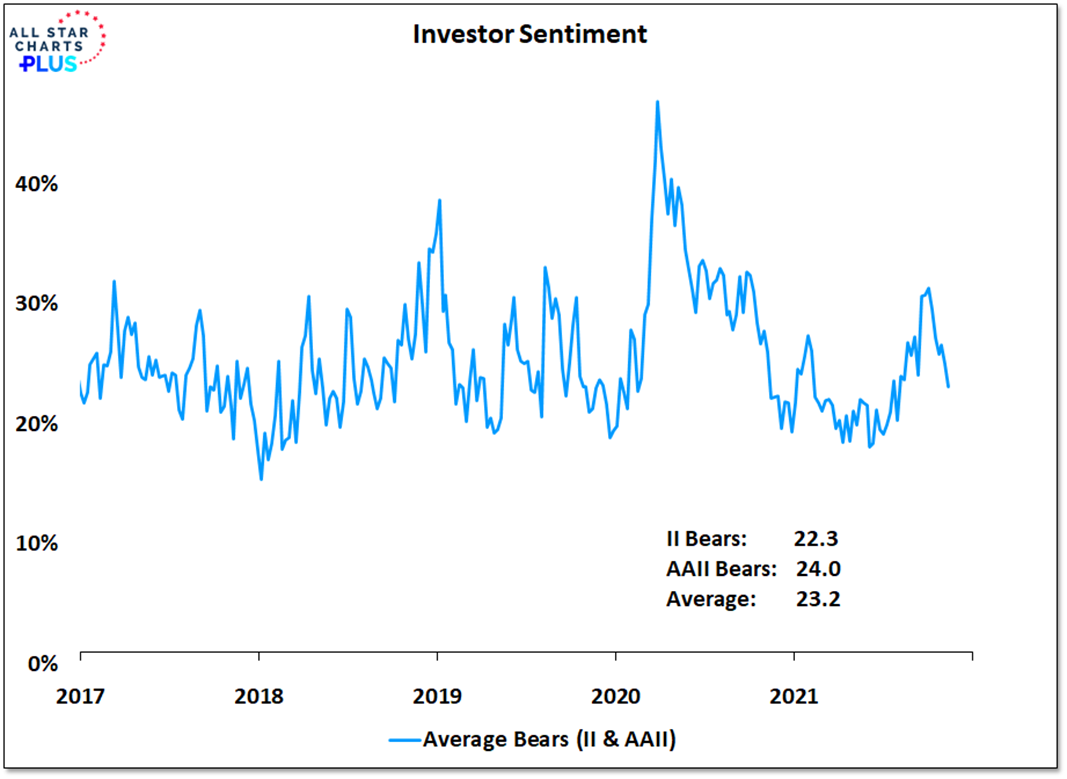 But this reading has really retreated back to more optimistic levels in recent weeks. This makes sense considering the rally from stocks.

We had the sentiment reset we were looking for, and that remains a positive. But the current reading has fallen back to a neutral level and is much less of a tailwind than it was just a few weeks ago. We’re also seeing stocks give back some of their recent gains.

With that said, we still need to see a lot more optimism before we’d consider this indicator a headwind again.

Despite the strength in US indices, one group that’s been grinding slightly lower and underperforming during the past month is financials — particularly the big banks. While some consolidation is always healthy, it’s probably not a good thing that these stocks haven’t been participating while the major averages are kicking off a fresh leg higher.

Bulls want to see banks sustain their recent breakouts. Whether we’re looking at our custom Big 6 Bank Index, the banking ETFs $KBE and $KRE, or the Financial Sector SPDR $XLF, these trends are all looking vulnerable and rolling over back toward their pivot highs.

The big banks have been the weakest in the near term, so we’re watching them closely as they should lead to the downside. They’re already below their former highs. If these similar levels are violated by the other financial indexes and ETFs, things could get messy.

We’re considering this a heads-up for the broader market, and we think it’s a warning sign definitely worth listening to. We’re also keeping an eye on other cyclical sectors like energy, materials, and industrials, which recently broke above their year-to-date highs but also look vulnerable to failed breakouts.

We’ve been avoiding gold for more than a year now, as it’s only represented opportunity cost. But there are signs that could be changing.

Not only are gold futures catching higher on absolute terms, but they’re also finding support at a perfectly logical place relative to their alternatives. Here’s an example of what we mean using gold versus commodities as an example: 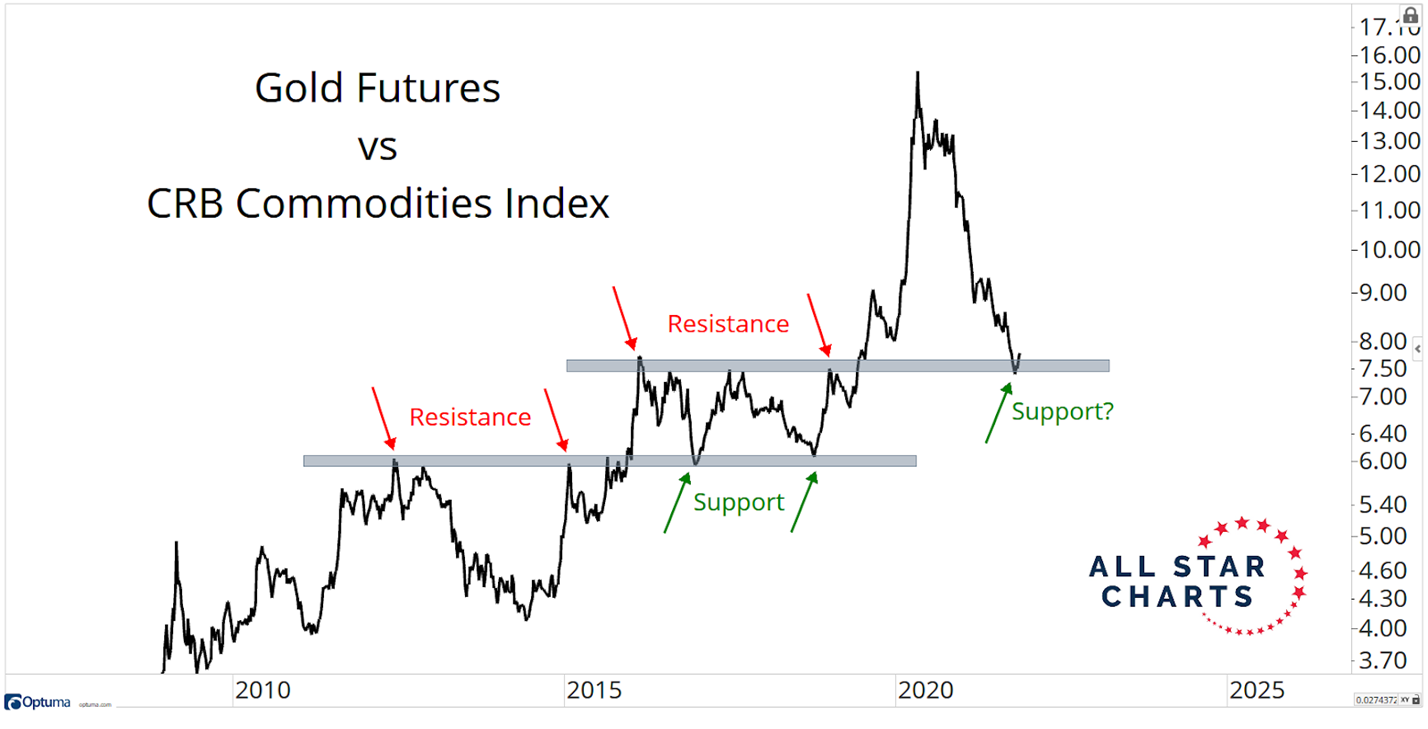 We think this key area of former resistance would be a natural level for gold to stop underperforming. This kind of relative price action is not limited to commodities; the stocks versus gold ratio is also running into potential overhead supply at our objective. And when we look at gold relative to Treasuries, it appears to be resolving higher from a massive base.

Things seem to be falling into place for gold and precious metals more broadly. If prices can keep working higher on absolute terms, we think there is a good chance gold can carve out some relative trend reversals here too.

If gold and precious metals assume leadership, a great way to express a bullish thesis is through the miners. In fact, even if they don’t assume leadership, our risk couldn’t be better defined in this trade, making for a very favorable risk/reward opportunity. While this is definitely one of those cute mean-reversion setups, with such minimal downside, we think it makes sense to take a shot.

The Gold Miners ETF $GDX recently dug in and defended a key area of former resistance at the breakout level of a multi-year base. 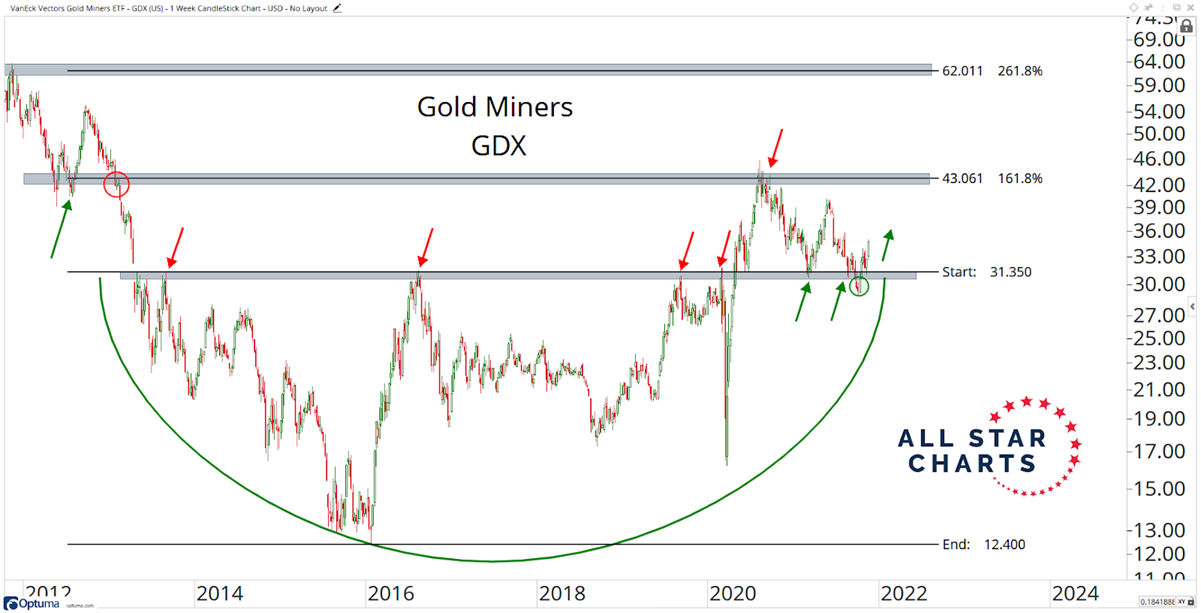 We think this failed breakdown could be the fuel for a fast leg higher. We want to be long against 31 with a 1-3 month target of 43.

As always, Premium Members can re-watch the Conference Call and view the slides here.

We hope you enjoyed our recap of this month’s call.

Thanks for reading, and please reach out to us with any questions.