On Thursday I posted a chart where I purposely erased the x-axis and y-axis. We don’t know the time frame, we don’t know the asset class, we don’t even know whether it’s a specific security or a ratio. The point of the exercise is to eliminate any preconceived notions and just focus on price.

For the most part I got a lot of bullish responses. More than 90% of readers saw this as a bottom. This is funny because sentiment on this particular asset is actually coming off some extreme bearish readings.

We are looking at a chart of Treasury Bonds over the past 10 months. This is a $TLT chart (using 2-day timeframes) putting in what looks to me like a nice round bottom. I’ve liked bonds all year, and I’m finally starting to see people coming around to the fact that we may not be in a rising rate environment. 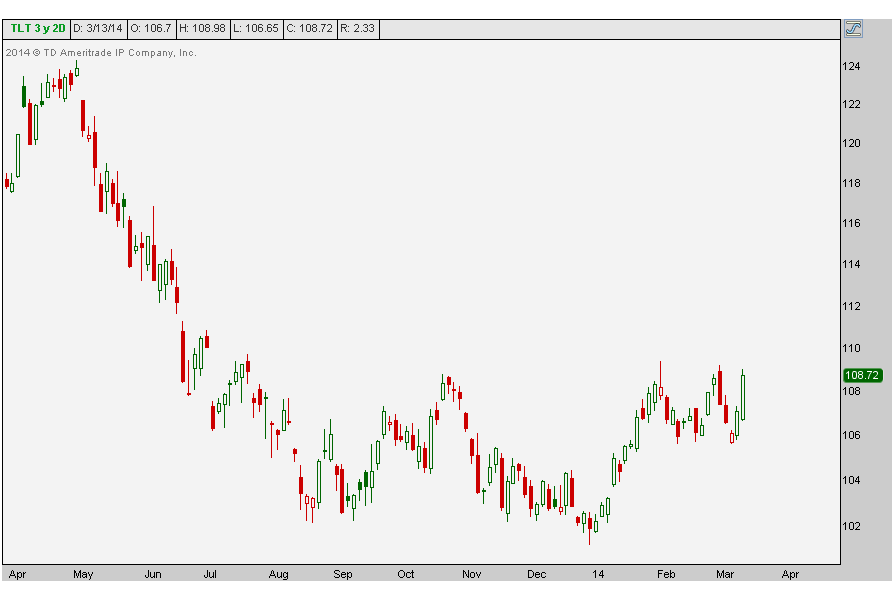 We’re talking about a 30+ year bull market in bonds folks. This isn’t exactly something that reverses over night. It’s a process. Nobody wanted bonds coming into the year (see here). But so far $TLT is up 7% YTD while the S&P500 is down. That’s why sentiment is so important to us. It matters.

I’d look for a breakout above the October and February highs to signal an end to this basing process. The measured move based on this breakout would give us an initial target of $115.

I’m glad you guys like these mystery charts so much. I think it’s a really valuable exercise.