Since early October, a big question for us has been, “How low can US Stocks go?  Obviously no one knew then, and no one knows now, so all we did know was that we did not want to own stocks. We wanted to be sellers, not buyers. Go to cash and ask questions later, type of mentality.

We’ve looked at declines in Crude Oil and widening credit spreads as a gauge for what to expect out of stocks. We’ve been monitoring market breadth for evidence of confirmations of declining indexes or whether they’re diverging from them. These internals studies and intermarket analysis techniques are great and incredibly helpful in any environment. But today I want to focus on specific prices levels for the two most important indexes in America.

First, let’s look at the Dow Jones Industrial Average. The way I learned it, we don’t want to “Fight Papa Dow”. Early last year the Dow reached a cluster of key price extensions based on the peaks from 2000 and 2007, the tops of the last two most destructive periods. This is a logical level to be seeing this sort of correction. If we’re below the February and April lows, we need to err on further downside for stocks: 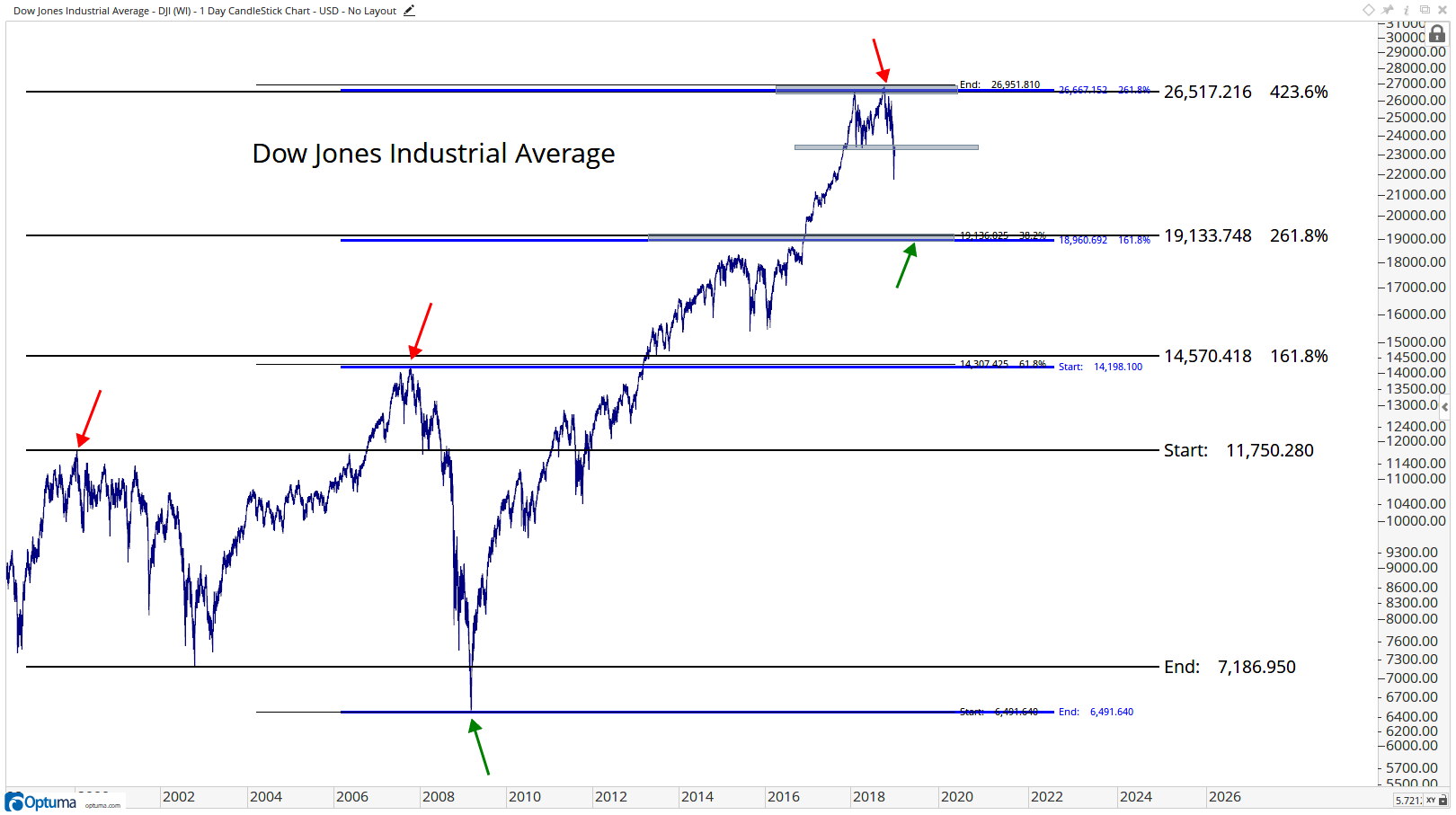 I think a logical level is down near 19,000-19,150 where we find an even larger cluster of extensions and retracements. This level represents the former extension levels from the 2000 and 2007 declines, but also the retracement of the entire 2009-2018 advance. If we’re below 23,300 we want to be short the Dow, net short of stocks in general, or at least in very heavy cash positions. Our downside targets getting achieved would give the Dow just shy of a 30% decline from peak to trough.

In the S&P500, we have a similar situation near the former lows from February. If we’re below 2530, we want to be short or in heavy cash positions. A retest of those 2015 highs would take us down under 2100, also giving the S&P500 just shy of a 30% decline from peak to trough. 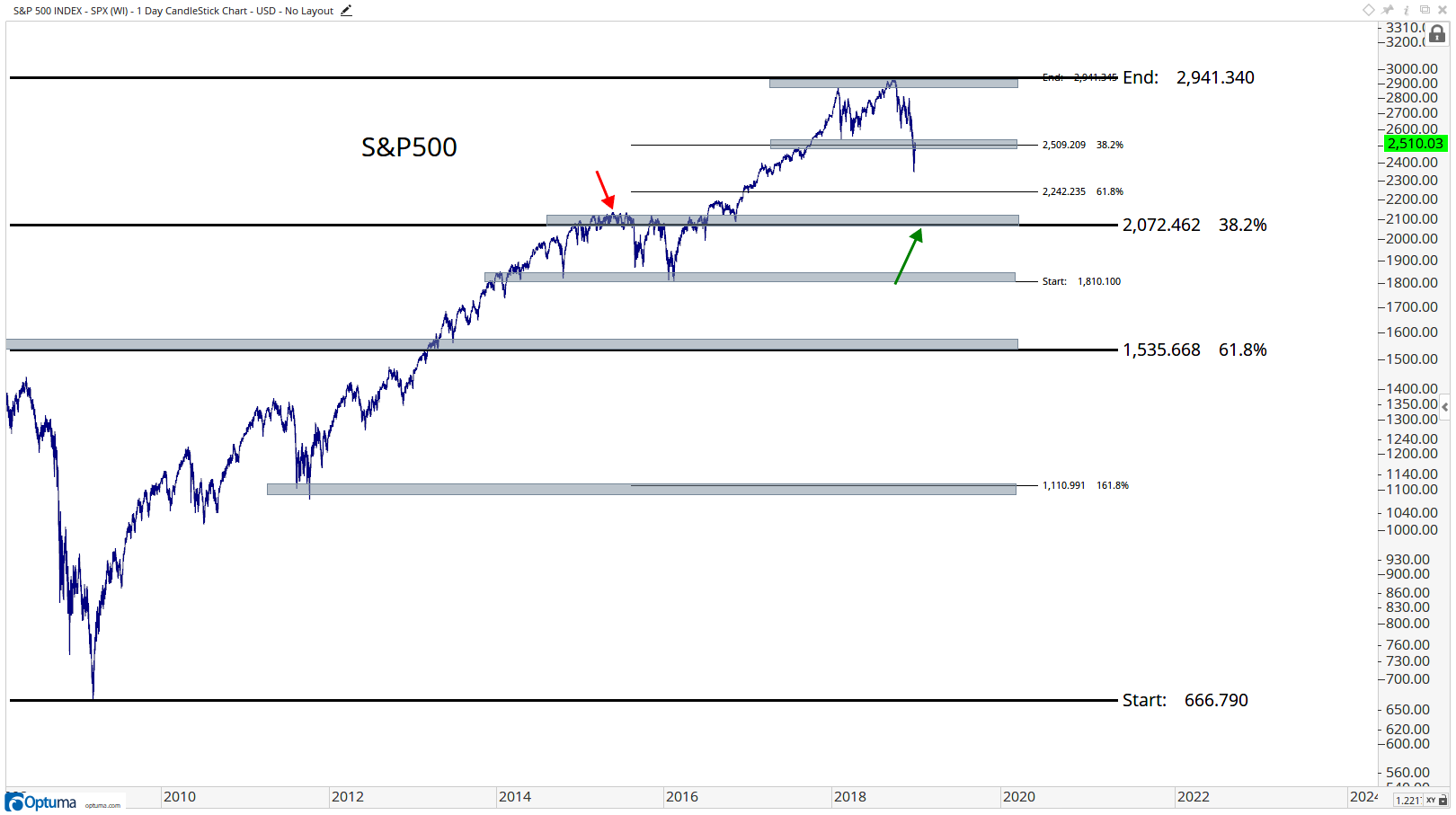 Some people will say, “Oh what’s the point, you’re just guessing and don’t know which way it will go”. And while that may be true, the good news is that no one else does either and everyone else is just guessing too. What I will say is that we calculate very specific levels and those of you who have been following along for a long time know how much these levels have helped us again and again over many years.

And what I’ll also add to the, “What’s the point, it’s better to do nothing” crowd is that at least we’re doing something. We’re not just hoping for the best. We’re identifying where there is real risk, when their clearly has not been in years. Ignoring this has been irresponsible. And just because I have targets 30% below all-time highs doesn’t mean the market cares what JC’s targets are. It can go a lot lower. Where do you call it quits? Down 40%? 50%? I’m not saying it’s going to happen this time, but it’s happened before. Are you suggesting that you’re so smart that you know for a fact that it won’t happen this time? What if it’s a 60% or 70% decline? Are you above acknowledging that as a possibility? I think you have to be a complete fool to think you’re that omniscient. You’re not, you’re just drunk on your own kool-aid.

I think we really need to be respectful of the current risk in the market if we’re below these levels. And yes, “IF”, because I have no idea what’s going to happen. All I DO know, is that if we’re below those levels, look out below. It’s only if we’re above them that I think things can be peaceful for now. But that appears to be the lower probability outcome and lower prices for stocks, both US and abroad, are still to be expected.

If you have not downloaded my Q1 2019 Playbook, you can start a risk Free trial and check it out.