Very interesting day today. We had a nice little market sell-off in equities as a lot of the triangles that we’ve been talking about broke to the downside, at least temporarily. I thought it was suspicious that we did NOT see the typical flight to safety trades that we normally have on a day like today. I get that options expiration is tomorrow and strange things seem to happen, but still. As we go through the “safety” list, there wasn’t a ton of action: The Dollar was flat to slightly up all day, Treasury Bonds had some bid, but not what we would expect, Gold got clobbered, and the Yen was up just a tiny bit. Typically we see big moves into some or all of these asset classes with the Dow down 200+.

So how did equities behave today? I think the S&P500 tells the story. After breaking down below that lower trendline this morning, the S&P500 hung out around the 38.2% Fibonacci Retracement all afternoon. The first chart shows the bigger picture: 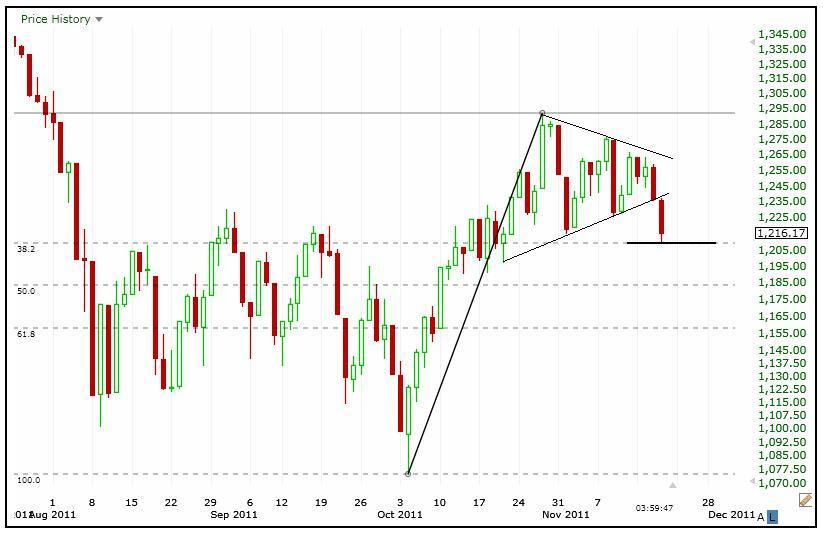 The second chart is an intraday look at the S&P500 showing the 38.2% Retracement in action all afternoon. You can’t make this stuff up guys: 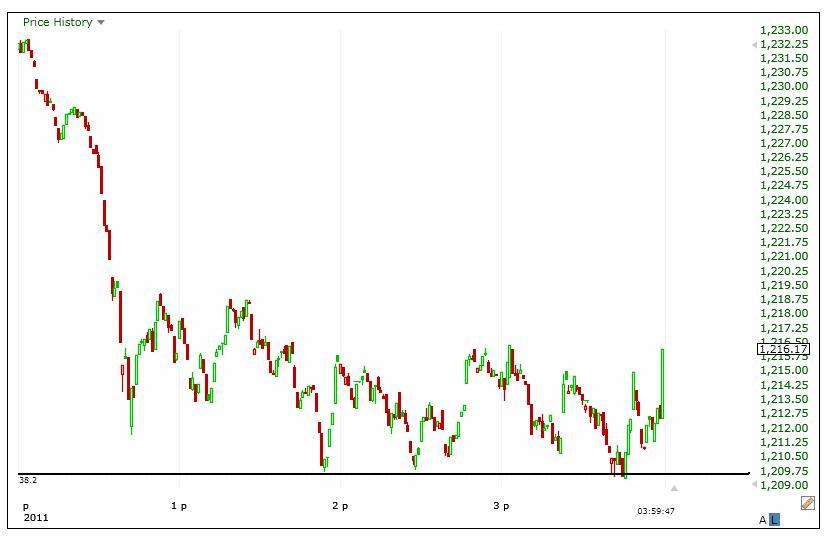 When the S&P500 made that lower high last week, we immediately asked ourselves, “how low can we go?”. The first thing we did was look at the retracement levels. Today was the first one – 38.2% of the big October move. It’s amazing though how precise these levels can actually be. This chart above shows exactly how the Fibonacci retracement came into play after lunch.

This is clearly an important level. Not only is it a key retracement, but also new found support from former resistance in August and September. We’ve been all over the fact that these consolidations tend to resolve themselves in the direction of the underlying trend, which is up. However, triangle consolidations, as we mentioned yesterday, sometimes whipsaw traders around before making their ultimate move. Sorry if your stops were taking out. A bunch of mine did – but that’s why we put them there.

We have our new line in the sand. 1210-1215 seems to be it right now. If it cannot hold, like it did all afternoon today, then you’re probably looking at a move down to 1185. On a more positive note, if the market can manage to get back above that broken trendline, then this false move is probably the fuel necessary to take the stock market to a new recovery high. The Russell2000 ($IWM), for example, already rallied at the end of the day to close back above it. Further strength there tomorrow and Monday would be our tell for the larger-cap names. 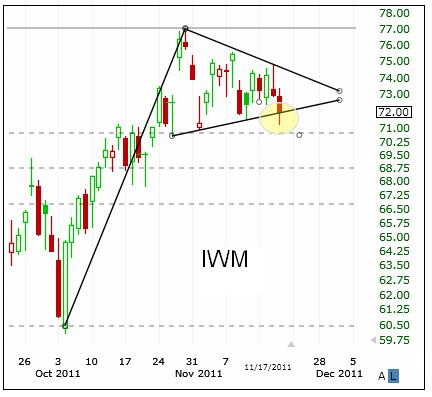 We keep saying that you need to be on your toes in this market environment. Whipsaws, or “false moves”, should be expected. Prepare yourself for them, because from these false moves, come fast moves – and those are the best kind.

I still think this consolidation resolves itself higher. The shapes can change from triangles, to squares (the names and shapes don’t matter). But the concept is the same. We went up 20% in less than a month (28% if you’re looking at the Russell2000). Moves that big and that fast need a rest. I think that’s exactly what we’re seeing.