This week marks the one-year anniversary of the top in 2020 for the S&P500, Dow Jones Industrial Average and Nasdaq100 Indexes.

Everything immediately fell apart after that and we experienced one of the greatest crashes in history.

This leads some people to think that with these indexes now making new all-time highs once again, a crash can happen at any time….

But what most people conveniently like to forget is that everything else had already been rolling over by this point last year. The only indexes left still making new highs were those 3 U.S. Large-caps.

Today, let’s run it back to last year and see what was actually going on, so you can see just how different things are today. All of these charts are from posts and client presentations I gave last February.

First, take a look at Small-caps, Mid-caps and Small-caps all making lower highs by this point last year:

In fact, Regional Banks had already peaked 2 months prior while the entire US Financials Sector was breaking down to new 5-month relative lows:

These aren’t the types of things that happen in strong bull markets, and especially not right before Financials break out of a decade+ base to new all-time highs.

It’s the opposite actually.

The Value Line Geometric Index had peaked multiple years prior and was no where near new highs: 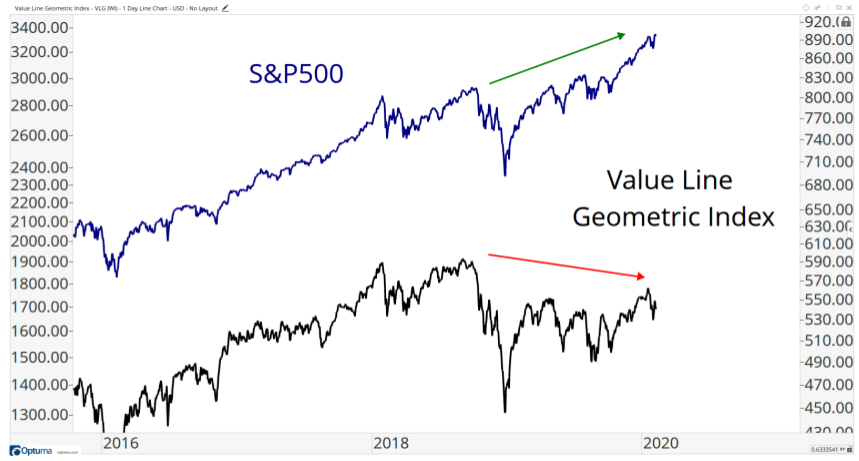 Dow Theory enthusiasts saw Transports also no where near new highs, which is as classic as it gets. We’re going on 130 years of data that people decided to fight a year ago: 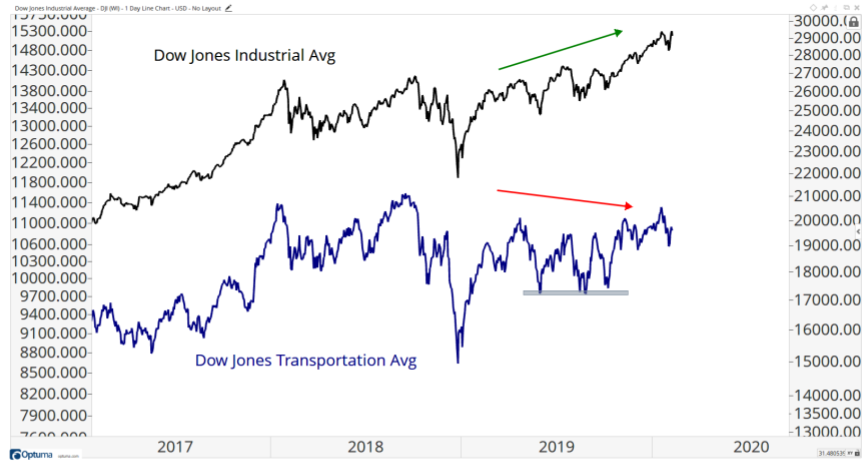 The permabulls were suggesting at the time that Transports would be the ones to play catch-up. But my point was that if they were about to outperform, they sure had a funny way of showing it as they were already breaking down to new relative lows: 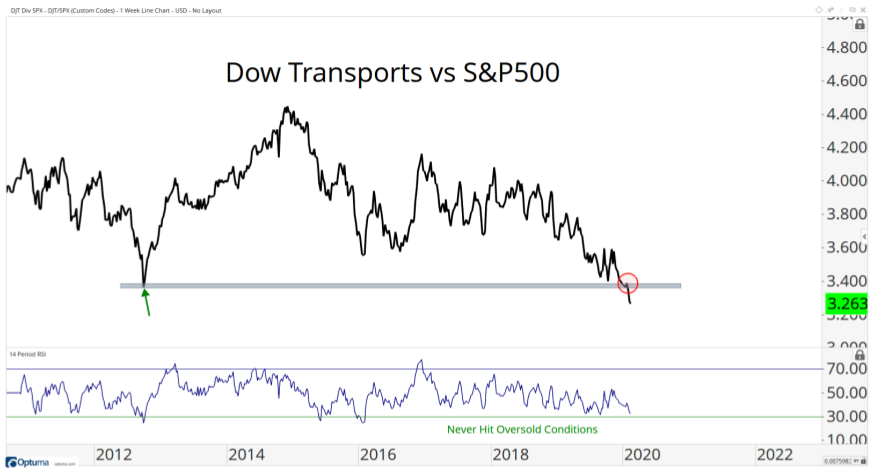 The list of new 52-week highs had already peaked and was deteriorating: 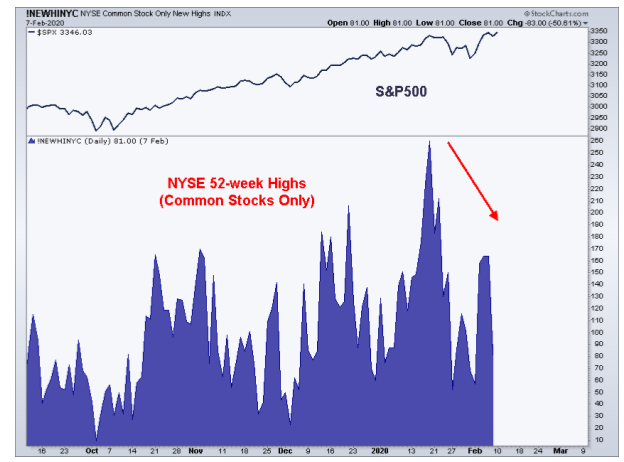 The NYSE (Common Stocks Only) Advance-Decline line had already peaked and was making lower highs: 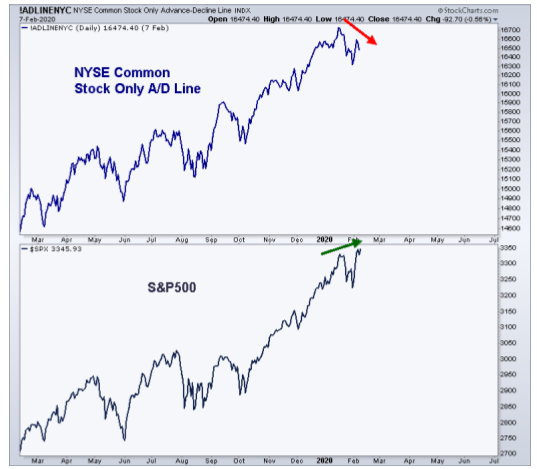 The S&P500, while still making new highs on an absolute basis, was the big loser compared to Gold and Bonds. Look at those downtrends in S&Ps relative to its alternatives: 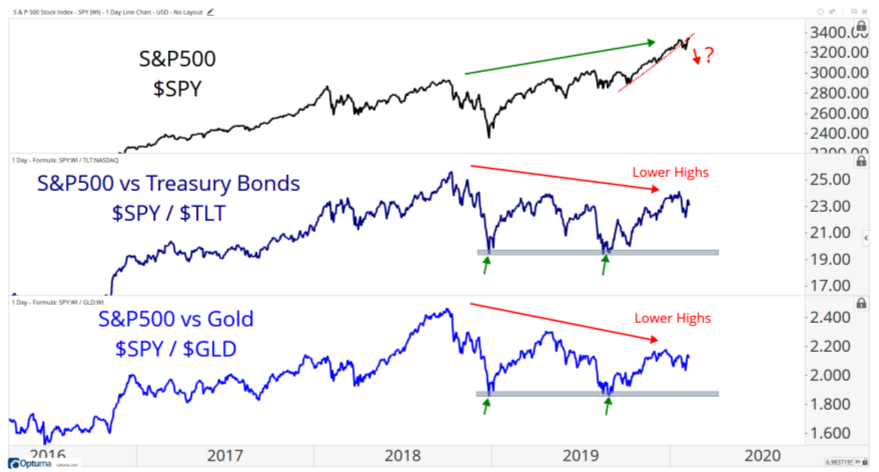 Money had already been rotating into defensive assets. Look at Consumer Staples outperforming, which is classic behavior for markets where stocks are under pressure, or about to be: 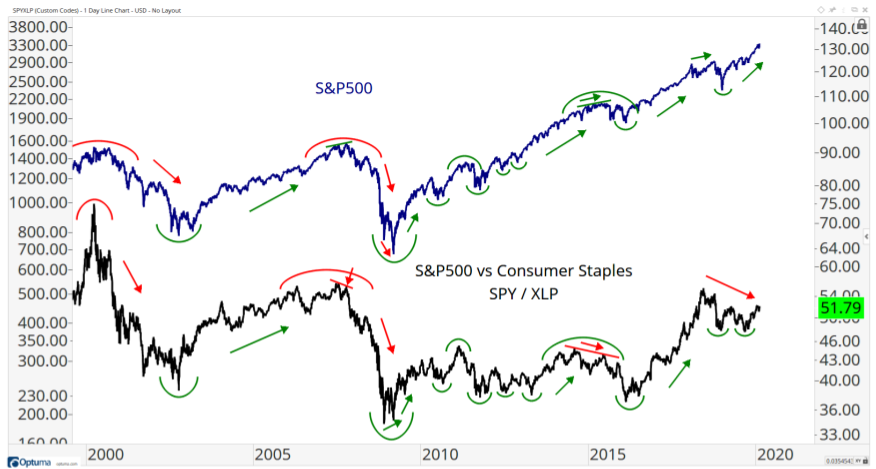 US Treasury Bonds were breaking out, as money was already flowing into defensive assets: 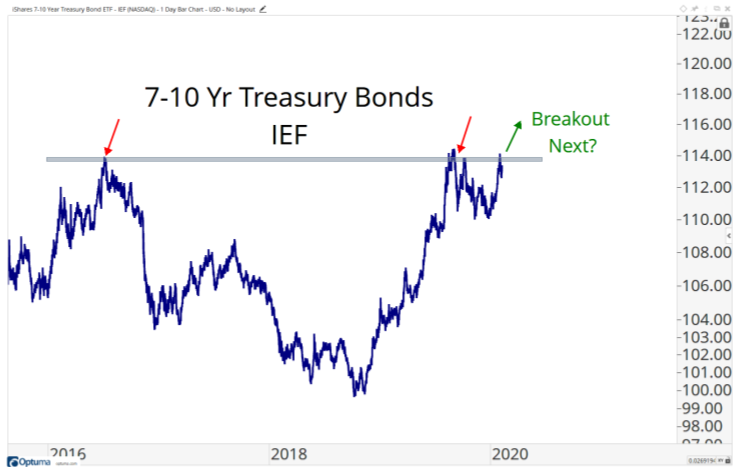 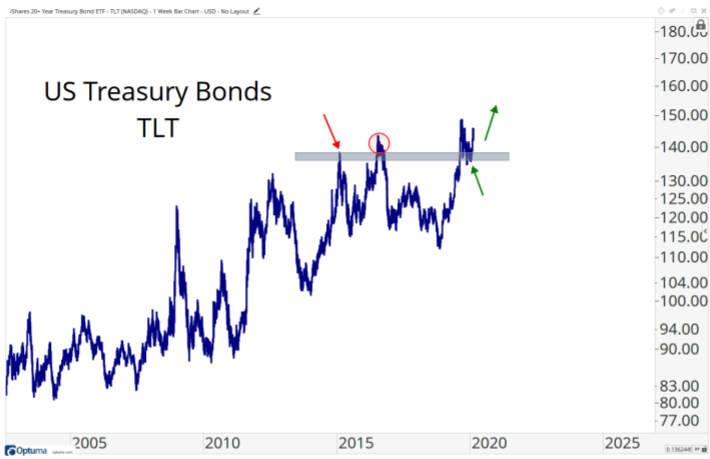 You saw it in the Forex markets as well as Japanese Yen was squeezing, the most defensive of currencies: 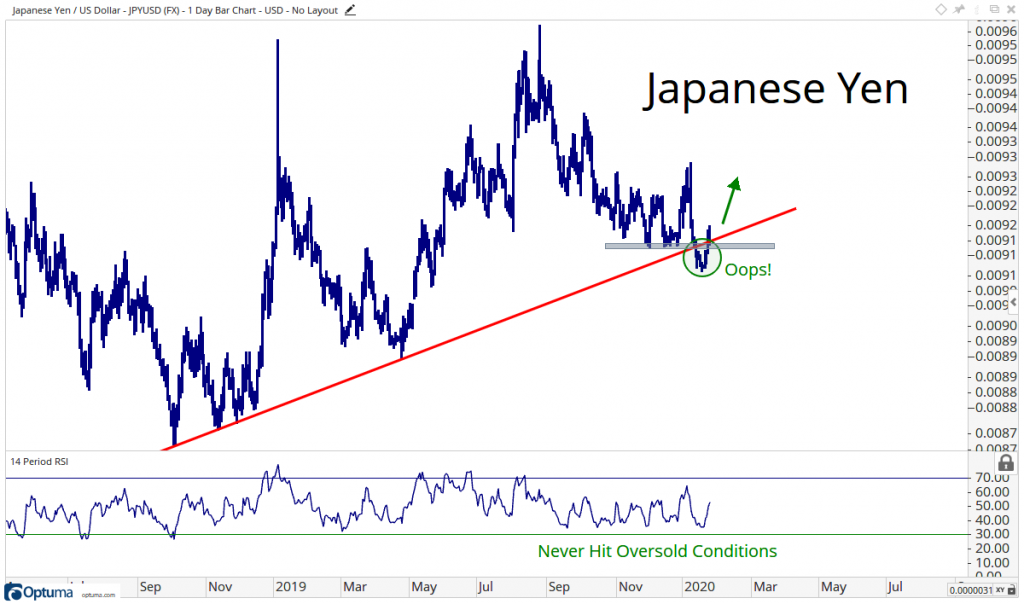 US Treasury Bonds and US Dollars were breaking out simultaneously while stock market breadth was deteriorating aggressively:

The Copper/Gold ratio was rolling over pointing to lower rates and a massive breakdown in US 10yr Yields: 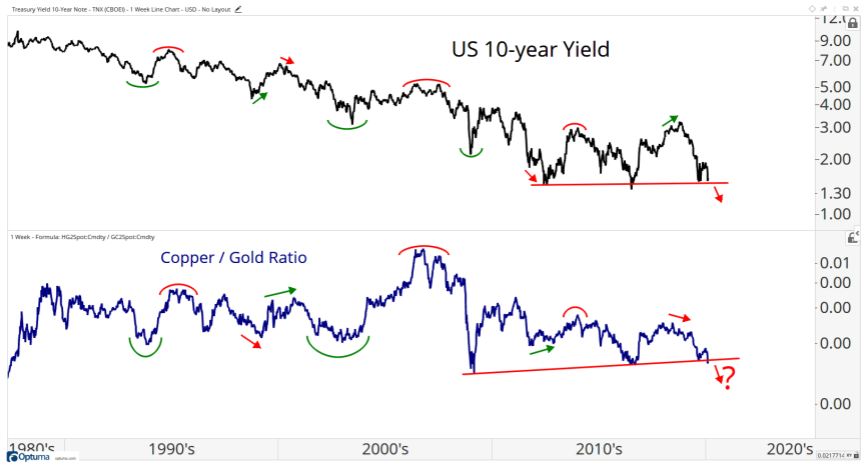 Look at bonds relative to Crude Oil breaking out of this base: 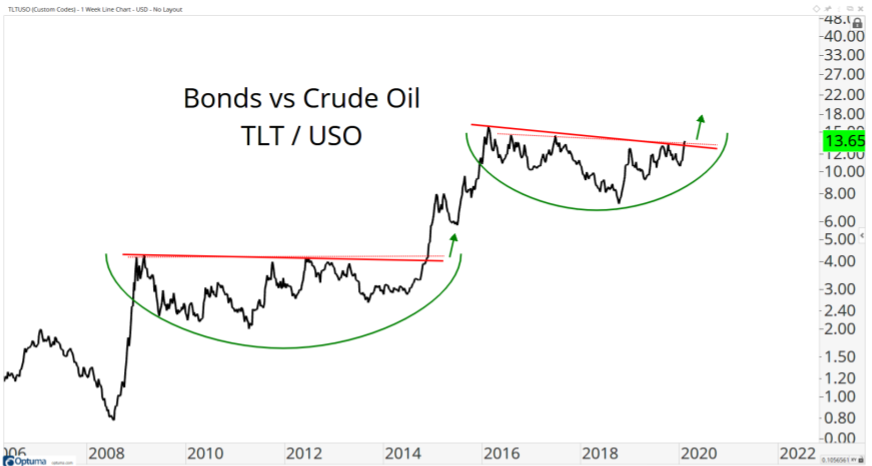 This was all happening well before Crude Oil traded below zero. Look at Energy stocks telegraphing this: 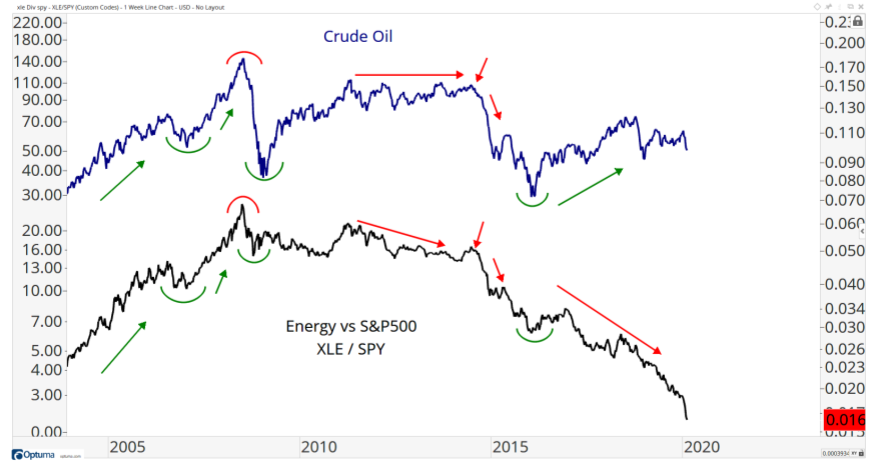 I can keep going, but I think you get the idea.

There was more evidence suggesting we should be out of stocks, than just before any other crash in market history.

I’ve said it before and I’ll say it again.

All you had to do was pay attention.

What you also might notice is that what’s happening in the current market is the opposite of all of these:

Bonds and Gold are the worst places on earth.

The Dow Transports are confirming the new highs in Dow Industrials.

The Advance-Decline lines for Small-caps, Mid-caps and Large-caps are all making new all-time highs.

We just saw the most new 52-week highs on the NYSE & Nasdaq ever.

Consumer Staples are underperforming, not leading.

The Copper/Gold ratio is breaking out to new highs.

Emerging Markets are a leadership group.

I can keep going if you want.

But my point is that yes, happy anniversary of the top in S&Ps, Dow & Nasdaq. Sure. But they were the only ones left. The anniversary of the actual top in stocks was well before that. Most people just decided not to pay attention.

Which brings me to my biggest takeaway here.

If you’re concerned with the gossip on television and the sexy headlines, you’re going to miss what is actually going on underneath the surface.

People get so distracted with the “news” of the day, that they completely miss the giant elephant slowly walking right in front of them.

This one was very clear.

We work really hard here and are confident that we will catch these signs for the “next great crash”.

Currently, we’re just not seeing it.

When we do, you know we’ll be right here pointing it out.

I hope you can be here with us.

Ping me, and I’ll make sure Peter has you on the right distribution list.

Thank you for your attention.